ARP 216 is a pair of galaxies in the Circlet of Pisces about 215 million light years beyond the Circlet and us. I find a lot on this pair but lots of confusion as well. I\'ll start with the basics first then get to the confusion. The distorted galaxy is NGC 7679 an SB0 pec galaxy some class as a Seyfert 2 and others a Seyfert 1 galaxy (OK a bit of confusion sneaks in). The other galaxy is mostly normal looking NGC 7682 classed as SB(r)ab and all agree is a Seyfert 2 galaxy. Arp classed the pair under Galaxies (not classifiable as S or E): Adjacent loops. I assume that refers to the \"bright\" loop to the north that may connect to the fainter one coming up from the west end. I\'d need a lot more exposure time to see if the loop is complete.

At the east end of NGC 7679 is a bright clump seen against the distorted tidal arm near its edge. This is classed as a separate galaxy SRGb 037.046 and shows the same redshift. I\'d dismiss it as just a bright clump that\'s part of NGC 7679 except a couple notes refer to it as a separate galaxy. Most say NGC 7679 and 7682 are an interacting pair. But I see little distortion in NGC 7682. It appears about the same size as NGC 7679 so I\'d expect it to be as distorted but that\'s not the case. It does have an odd dark lane at the south end of the brighter oval that separates that from a faint outer arc. Other than that I see nothing unusual enough to indicate a major interaction with NGC 7679. Now return to that puff on the east end of NGC 7679. One paper says of it: \"Dwarf satellite connected to the primary by a short thin filament, mostly normal to the surface of the latter. Primary appears to be spheroidal, not spiral.\" I don\'t see the filament referred to. But this paper and a couple others seem to indicate this little guy is the culprit and what we have here is the remains of a galaxy \"eaten\" by NGC 7679 rather than interaction with NGC 7682. Though most papers only cite NGC 7682 as the interacting galaxy. For now, I\'m going with the minority view that this is a merger situation. Star sprays are often the result of such mergers. It could be that this low density \"fluff\" has been pulled into the \"loop\" Arp sees by NGC 7682 but that the vast majority of the distortion of NGC 7679 is due to the merger which is also converting it to a spherical or elliptical galaxy from a spiral before the merger. All speculation on my part.

I accidentally imaged this one twice but with the faintness of the plumes this turned out to be a good thing as by combining them both the faint eastern component of the loop came up enough from the noise it could be seen. Since I took it twice only by accident, first image run didn\'t get logged, I didn\'t take pains to be sure the centering was at all similar. This results in the image being somewhat cropped from my usual size. Fortunately, there was little to be seen in the cropped portions. In fact, the background is rather sparse even with twice my normal exposure. Few stars or galaxies are to be seen. It\'s not in Sloan\'s survey field so few of the background galaxies in the image are identifiable.

The other major galaxy in the image to the southeast of Arp 216 is UGC 12628. It is about 200 million light-years distant by redshift. Close enough to Arp 216 that they may be part of the same group. It is classed as SB(rs)c. Its many spiral arms seem rather chaotic some being short arcs, another rather straight and crossed by a highly curved arm.

The only other galaxy in the image with redshift data is SRGb 037.051. It is due east of NGC 7679, two-thirds of the way to the eastern edge of the image. It is nearly 700 million light years distant. Since I first wrote this quite a few galaxies without redshift have been posted to NED. I\'ve identified a few of these. Note the blue smudge above NGC 7679 is listed as an X-ray source rather than a galaxy but that\'s likely due to it being recorded by an X-ray satellite.

There are two very blue galaxies that appear nearly starlike in my image to the west-southwest of NGC 7679. I\'ve identified these but found little on them. They look quite interesting in Arp\'s image. Also, there\'s a distant galaxy seen right through the eastern stretched arm that is somewhat red in color, possibly due to dust in that arm. It too is anonymous as far as I can determine. 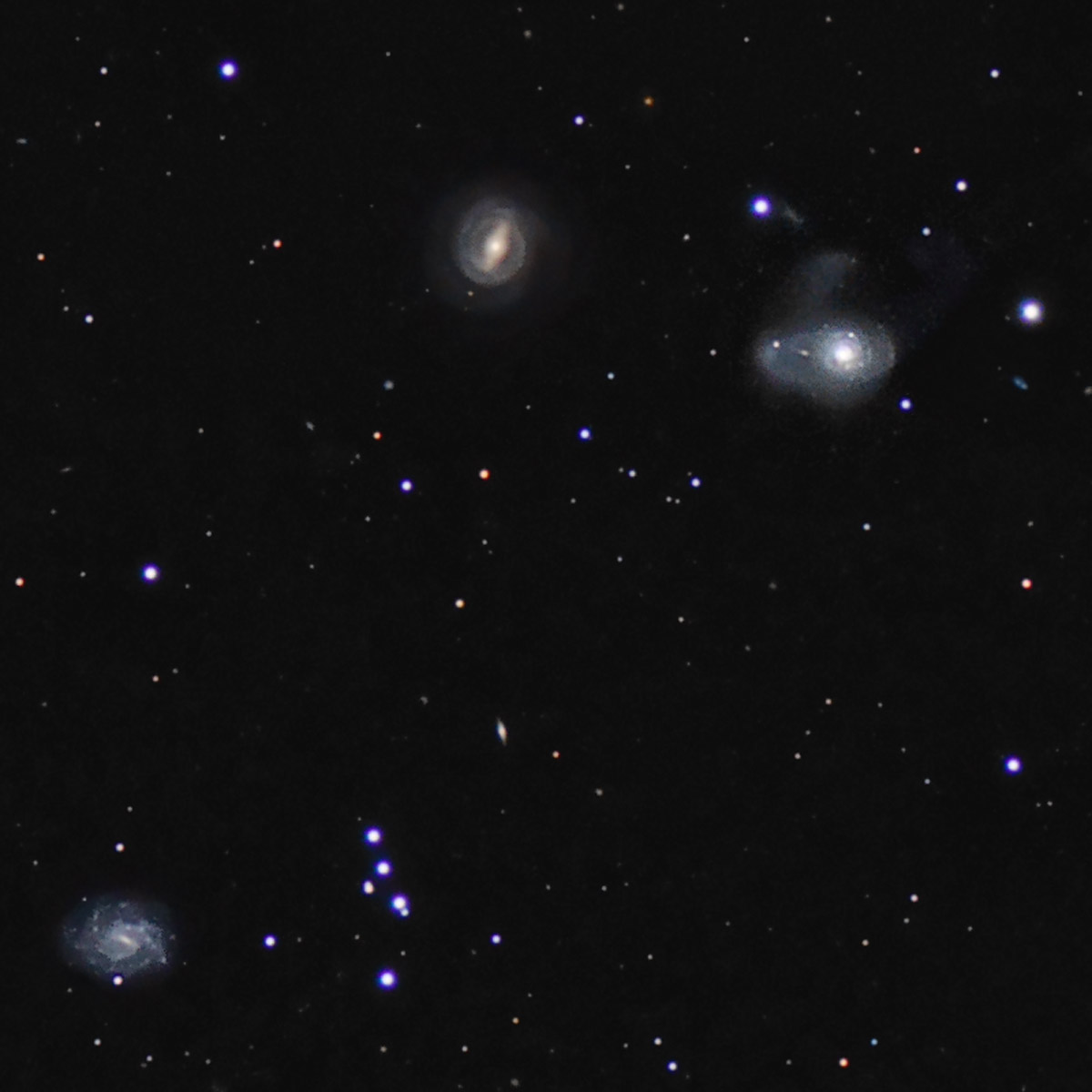 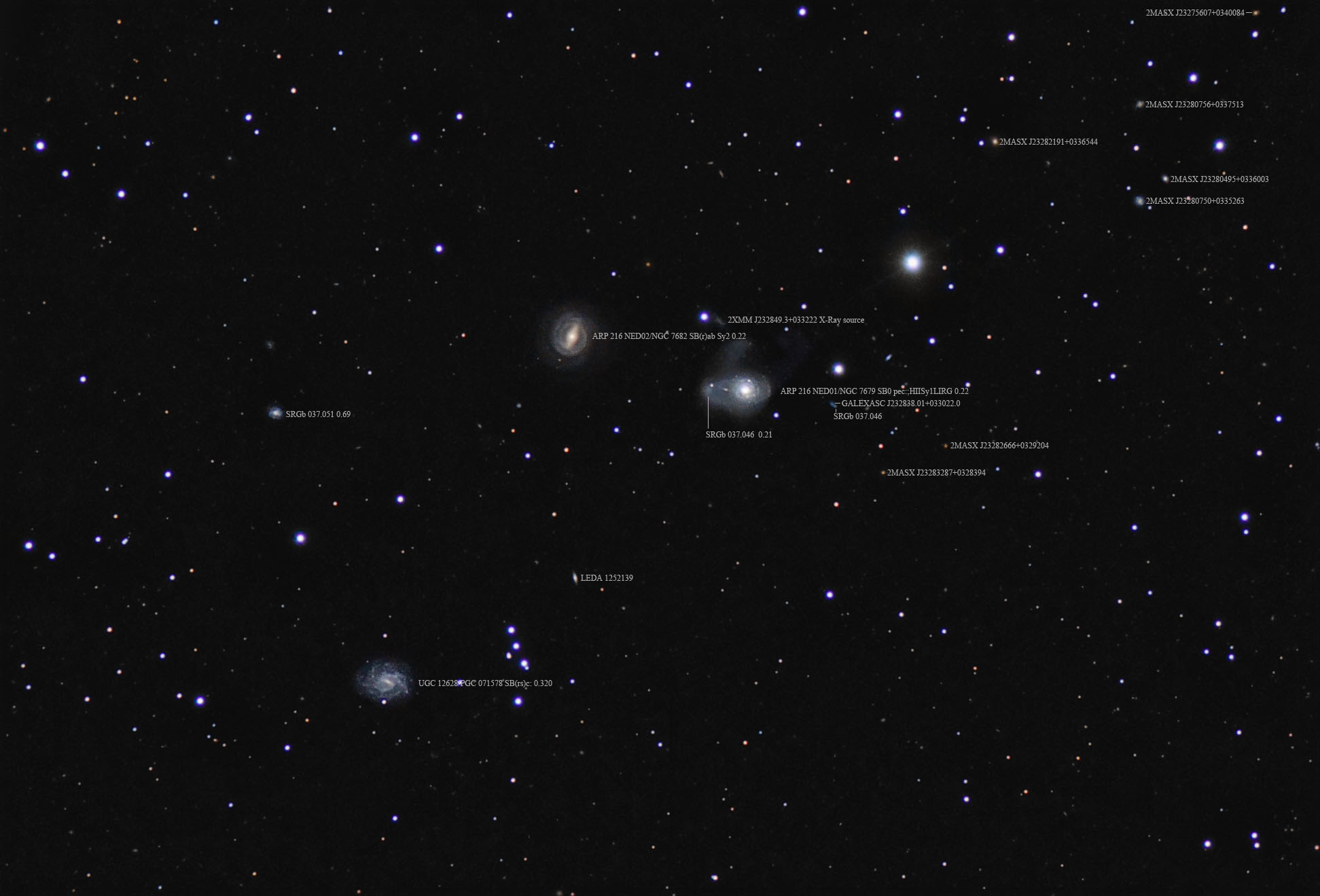