This is another retry at an Arp entry I wasn\'t happy with the first time around. I wanted to get a lot more time but the weather had other ideas and most of the data wasn\'t usable due to horrid seeing and clouds. There\'s a lot to talk about here. It\'s a long read for those interested. The rest can just jump to the pictures.

Arp 227 falls into Arp\'s category for galaxies with concentric rings, modern astronomers refer to it as a shell galaxy. It is located in Pisces about 93 million light-years distant by redshift. Many papers say 100 million which, given the uncertainty of redshift distances is a nice round estimate I won\'t argue with. It consists of two galaxies, NGC 474, the shell galaxy and a true companion NGC 470 to the west. Some sources deny NGC 470 is part of Apr 227. Arp did frame his image to give 470 and 474 equal weight but didn\'t list it as a member. Another shell galaxy is in my image, NGC 467 to the southwest but it would seem to be unrelated being some 2.5 times further away. While not exceedingly rare, shell galaxies with such well-defined shells as these two are uncommon, to have two in the same small area of sky exceedingly rare. I don\'t know of another example.

NGC 474 is classed as (R\')SA(s)0^0^ at NED and (R\')SA(s)0 at the NGC project. Shell galaxies are thought to form a couple different ways. One is a direct radial hit by a small, low mass, galaxy that is destroyed in the process. Stars are flung out, turn around and fall back. This, in simulations, causes them to linger for a bit as they turn around creating an area of higher density. Those with further orbits before the companion was torn apart go out further to a more distant turnaround point. Thus high star density shells are formed. I don\'t pretend to begin to understand this concept. The other method involves a grazing impact that also destroys the companion. In this case, its stars are flung out into spiral-like loops that then loosely wrap about the host galaxy like a fishing line snarl open face fishing reels can create. At least I can understand the fishing line snarl but the rest still eludes me. See: https://apod.nasa.gov/apod/ap140105.html for more on this and a much deeper image than mine. Arp, always the contrarian, has a really weird explanation. The companion spirals in creating the rings. We do see some such rings, in fact, there\'s a few around our galaxy due to dwarf galaxies our galaxy has and still is in one case, dining on. But they are far from sharply defined as they are in shell galaxies. Arp though goes on to say that both 474 and 470 are the remains of a larger active galaxy and that the two quasars near 470, see my annotated version, were ejected from the center of the original disrupted system. Of course, he uses his reworked physics to explain away their redshift that puts them billions of light-years behind these two galaxies.

So how does NGC 470 fit into this? Wish I knew. It is classed as SA(rs)b by both NED and the NGC project. Its arms are unusually thick and uneven. That could be perfectly natural for it. Or could this be due to interaction with NGC 474? NGC 470 does have some small possible plumes coming off either end that might indicate interaction with NGC 474 but I doubt its gravity is sufficient to create the shells in the much larger galaxy yet be so little influenced itself. Most papers on 474 say there\'s no other evidence of a collision with another galaxy but for its shell structure. No second nucleus or apparently evidence for two planes of stellar motion. Though if the idea the companion was so low density to be totally destroyed the lack of anything else but the shell structure isn\'t all that surprising to me, but I\'m far from an expert on this! I found papers saying the two are and are not interacting. I vote with the latter (barely) but will reserve the right to change my vote if better evidence for interaction is found.

A third member of the group is MGC +00-04-083 to the southwest. It has about the same redshift but doesn\'t appear to be interacting with anything and is quite small and insignificant compared to the other two. A distant galaxy appears to overlap it to the NW of its core. This little guy, as with most in the image is anonymous.

Then there\'s the other shell galaxy NGC 467 at nearly a quarter billion light-years. It too has a companion, to the east-southeast this time PGC 1249151. I can\'t find a redshift for it. Is it a true companion or just a line of sight galaxy? Like NGC 474, besides the well-defined shells, it too has plumes. The most obvious to the south but if you look closely there\'s a faint arc of stars even further north than the bright plume extends south. I needed more time to bring these out in both galaxies. CGCG 385-068 at the very bottom of my image to its southeast has a similar redshift and shows a faint tidal tail. While I can\'t see it as causing the shells it could have had some interaction creating the plumes I suppose.

This is one very busy image that could have used a lot more time. Maybe a third try is needed.

There are 5 asteroids in the image, one seen atop the shells of NGC 474. Details are on the annotated image. 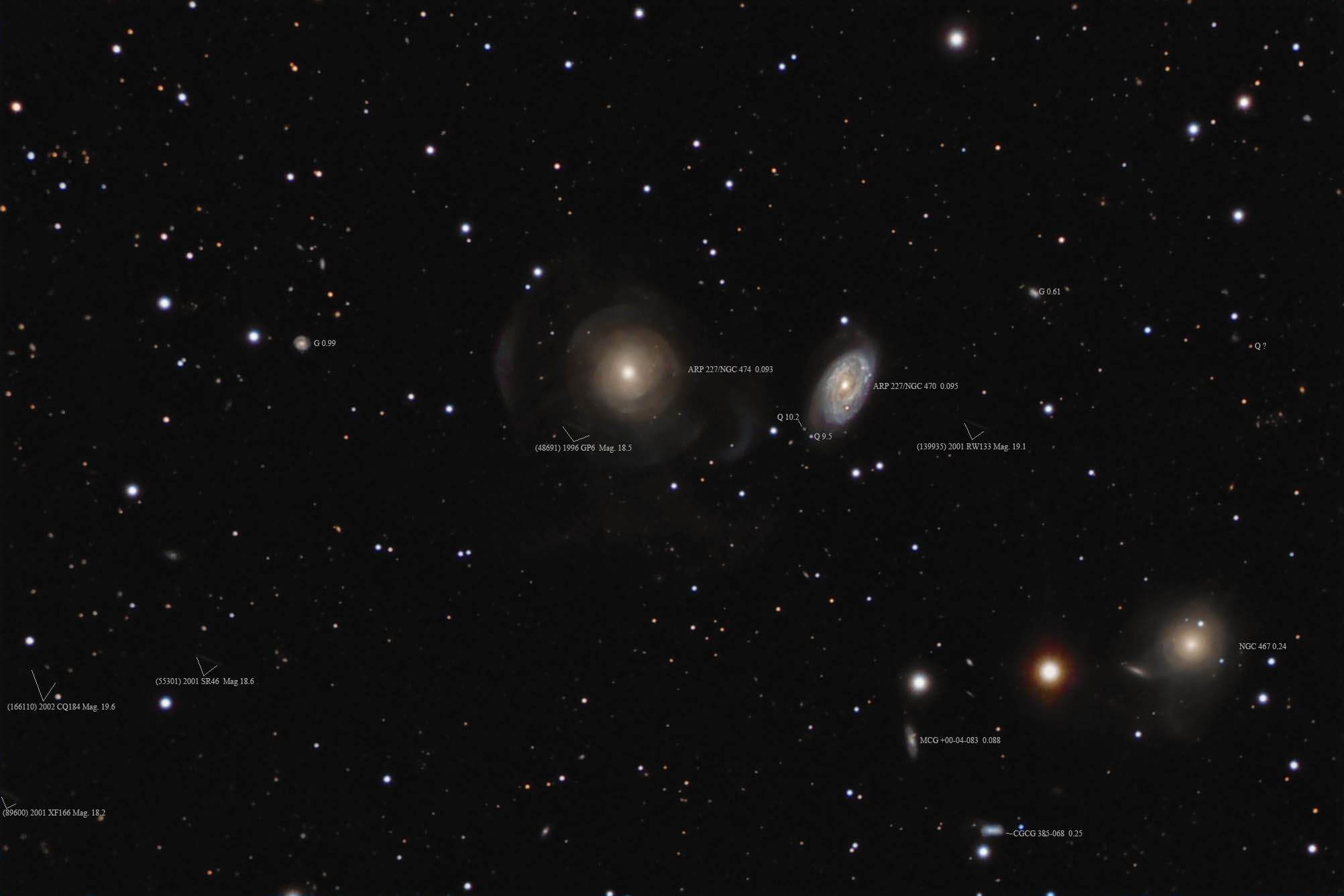 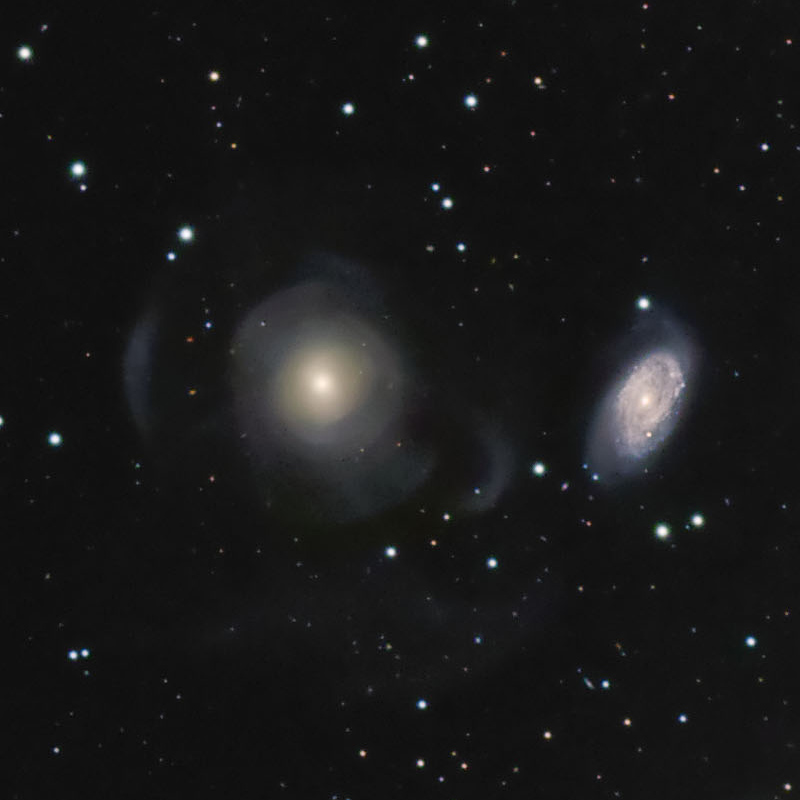 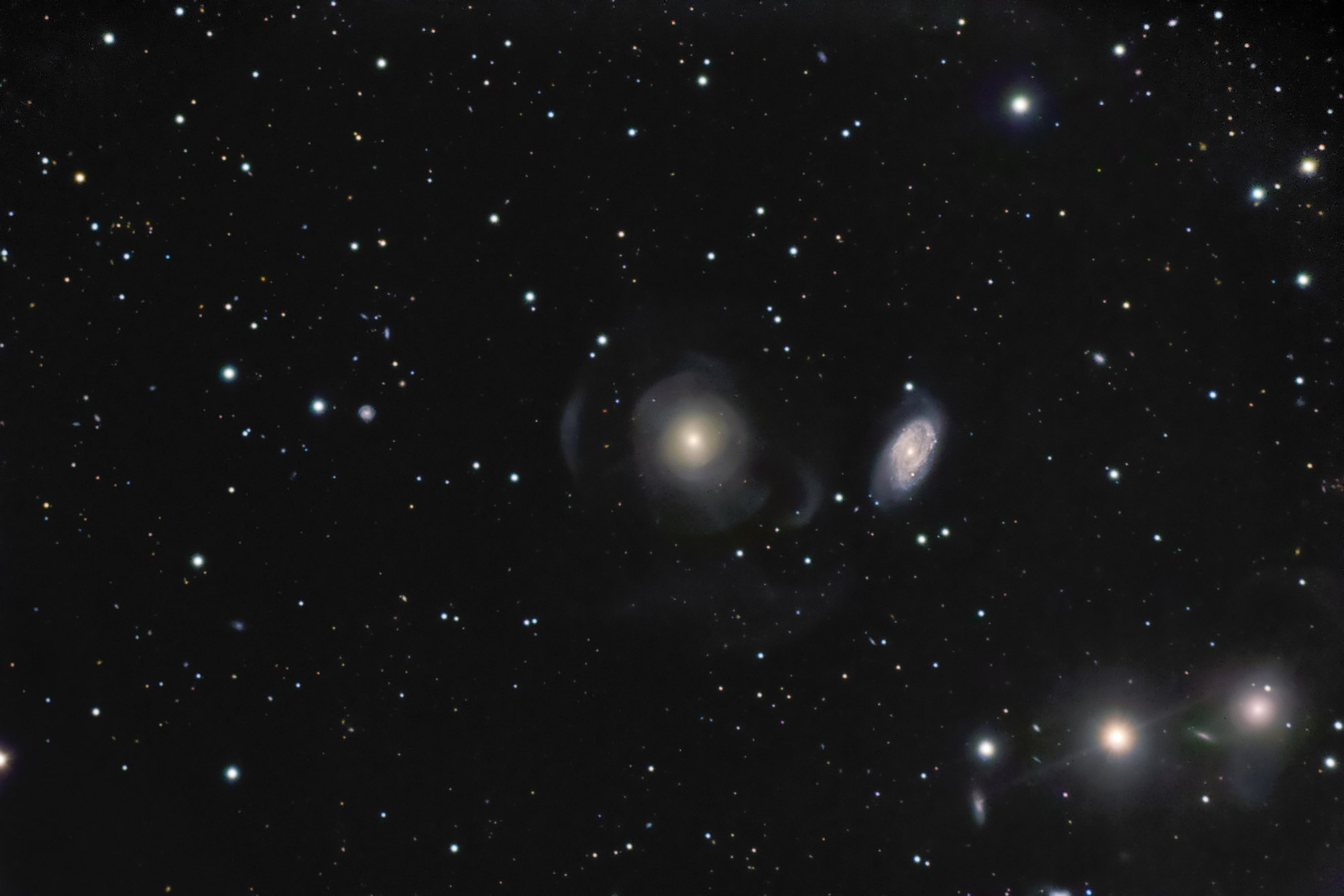