Arp 228/IC 0162 is the largest and likely anchoring galaxy of a small cluster of galaxies. USGC U076 is one designation NED uses. Their redshift distances range from 220 to 250 million light-years. The difference is mostly due to their orbital velocities about a common center of gravity. Since Arp 228 is likely the anchor its redshift of 223 million light-years may be a good estimate of the distance to the group. It is classed as S0. Arp put it in his class of concentric ring galaxies. It appears his image failed to pick up the extent of the outer ring. At least the outer ring I picked up. Deeper shots may show yet another ring for all I know. Arp 228 likely is the end result of a normal spiral fattened up on many smaller galaxies in its group.

MCG +02-05-039 just to its southeast is a very odd looking galaxy. NED doesn\'t try to classify it. Is it being distorted by Arp 228? Sort of reminded me of a Vargas Girl, big bust, tiny waist and large hips. Its redshift puts it at 230 million light-years which may be yet another indication it is getting whip-sawed by Arp 228. To the west of Arp 228 is another pair of galaxies. IC 0161/UGC 01266 and UGC 01266 Notes01. They show redshift distances of 230 and 250 million light-years respectively. The little guy may also be getting whip-sawed by the gravity of the larger or they may just be along the same line of sight. A note at NED says IC 161 is nonexistent but most say it does. It is true Swift\'s position for it and 162 were poor with 161 being right at his magnitude limit but most credit him with both galaxies The Kanipe-Webb book only uses the MCG designation but NED itself gives IC 0161 as its primary designation for the galaxy. The IC description of 161 may not fit. It says \"considerably extremely faint, very small, round.\" Though the visual observers may only be seeing the core which is round. For comparison the description of 162 which is Arp 228 reads, extremely faint, small, little extended. That would indicate only its core was likely seen as well. Most say Lewis Swift saw IC 161 on January 8, 1891 and IC 162 on October 3, 1889. What causes some to say 161 is nonexistent or lost is that it is fainter yet was found first. Being so close together they question him seeing the fainter one but missing the brighter. But galaxy visibility depends on surface brightness. Due to IC 161 having a starlike core and a large but low surface brightness disk it could be Swift mistook it for a star. Not having tried to see either visually I can\'t say if this is possible or not.

UGC 01268 north of Arp 228 is classed as S? It appears to be a red spiral of some sort. Its redshift says it is 220 million light years distant, the closest of the group but again this may not necessarily be the case.

UGC 01263 is the face on spiral to the northwest of Arp 228. It too is classed as only S? It appears to be a barred spiral with a ring and outer arms. It certainly is peculiar. Redshift puts it at 227 million light years. It seems unusually red for such a spiral. The pair of red double stars between it and Arp 228 are much redder than I normally see. Are they a true pair I wonder?

The only other galaxy in the image with a redshift is MRC 0145+102. It is listed at 21.4 magnitude but no filter is given. My normal limiting magnitude is about 22 and from the estimated brightness of the asteroids in the image it would appear I\'m reaching at least magnitude 22 probably 22.5 or so. But this one is far fainter than that would indicate. It is a radio source. I\'ve noted the optical component on the annotated image, southwest of Arp 228. According to NED, it has a redshift of z=2.845000! That means the light I\'m imaging was well into the ultraviolet when it left the galaxy some 11.4 billion years ago. That has to be one super object to show a physical size at that distance! You may have to enlarge the image to find it.

I managed to pick up 6 asteroids, most exceedingly faint. I found the three faintest only because the Minor Planet Center said they were there and gave the position. All are shown in the annotated image. 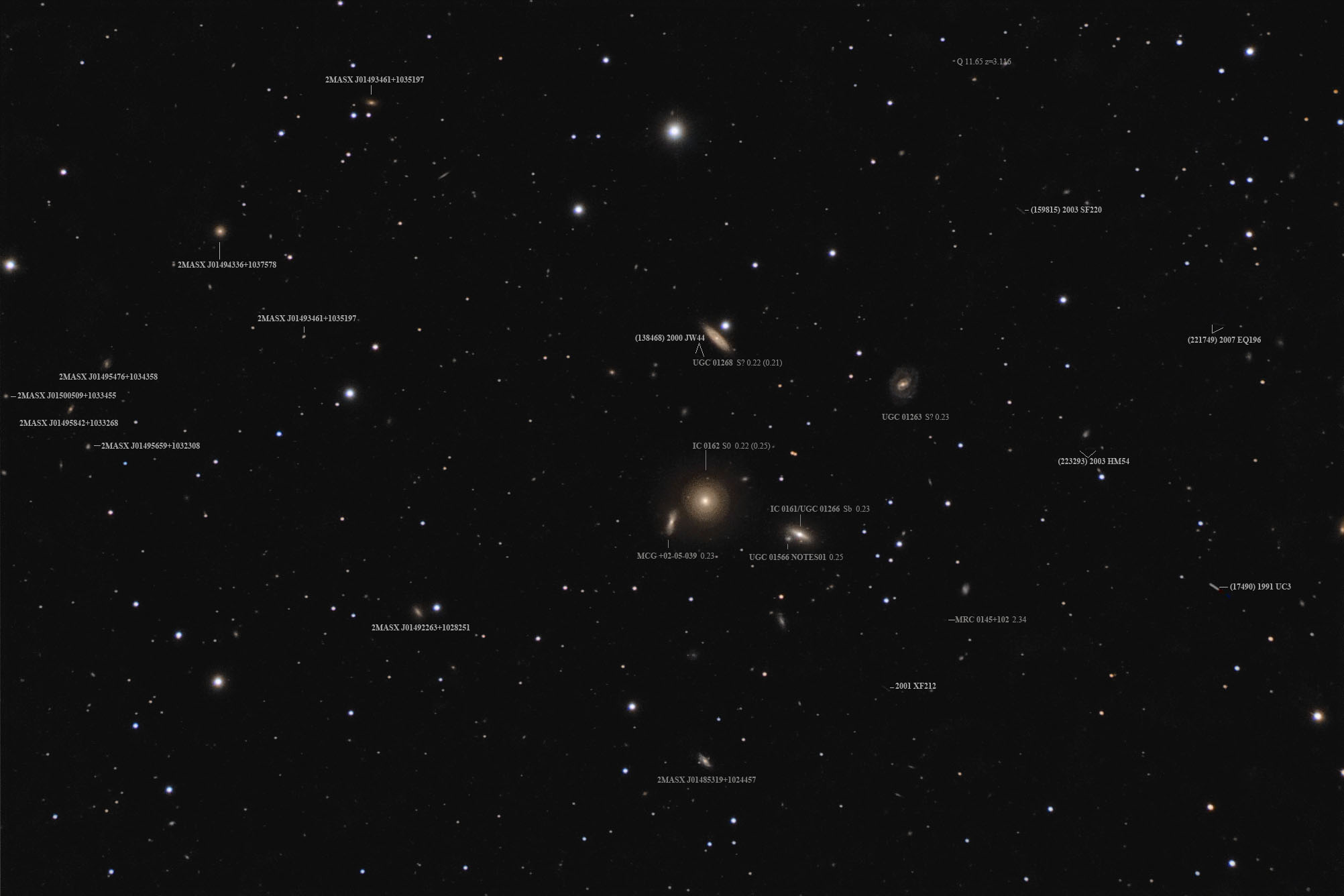 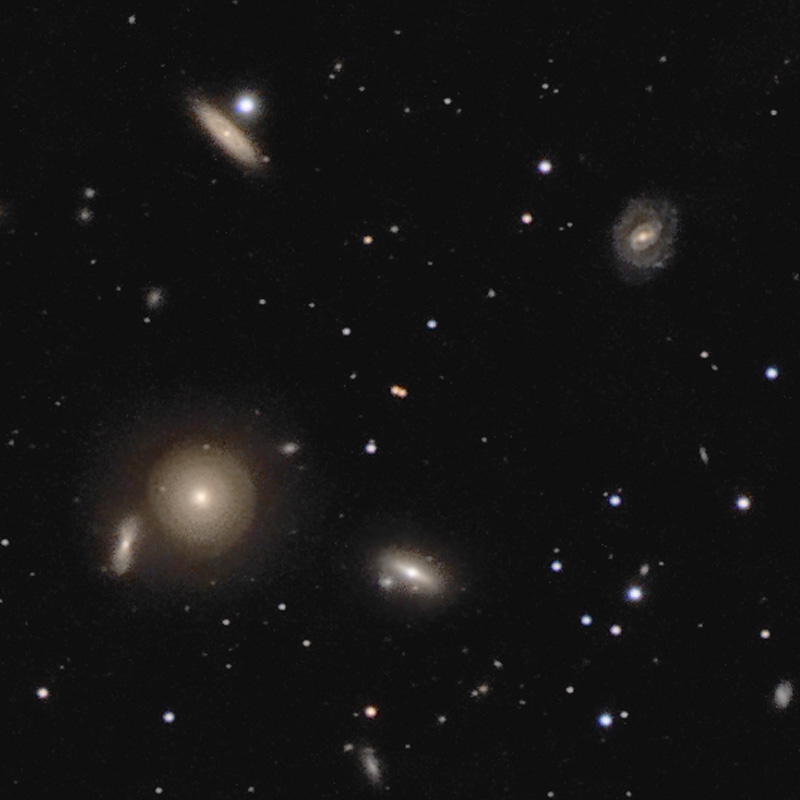 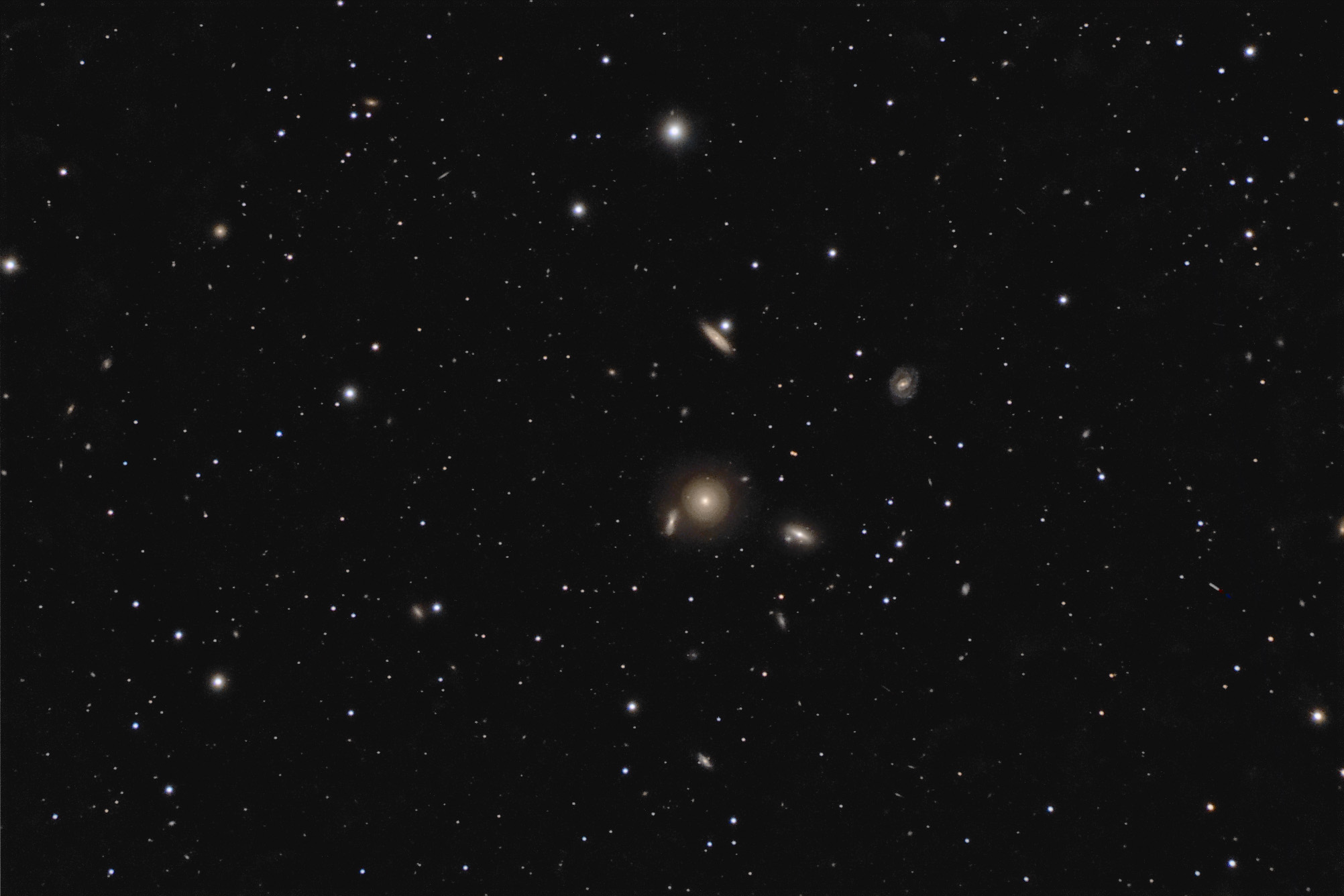