This is my second try at the NGC 507 group. The first attempt was centered on NGC 507 as part of my project to image the Arp Galaxies. But that missed much of the group to the north. Also, the color data with the original was rather poor. This time I got good color data but seeing wasn\'t so hot. Since the framing is very different I couldn\'t use the good color data with the better seeing of the first image. The group is located in the northeast corner of Pisces, near M33. Its distance is listed at about 250 million light-years by NED though this seems at odds with the distances of its members. In fact, NGC 507 which appears to be the Big Cluster Galaxy of the group but is shown at only 210 million light-years. In fact, the redshifts of the galaxies NED considers to be group members seems rather centered about this value with only one in my image greater than 250 and most in the 200 million light-year range. Normally I\'d not include the distance values in an annotated image but because of this discrepancy did so in this case. A question mark for distance means the galaxy had no redshift value but appears it may be part of the group. A couple oddball blue galaxies weren\'t in NED at all as galaxies. They are listed only with a question mark. While the data release 8 of the SDSS covers this field that hasn\'t yet been added to NED so many galaxies are omitted. These two, however, appear highly distorted and may be small members of the group that didn\'t fare well in interactions. One, northwest of Arp 229 is a very blue irregular mess with several bright star clouds. The other to the northeast of Arp 229 is drawn out into a streak similar to an edge on galaxy but has a dim area a bit southeast of center that shouldn\'t be in a true edge on galaxy. Is it two galaxies? (Edit: NED now includes these. The NE streak is GALEX J102409.16+332342.7 and the NW mess is GALEX J012320.62+332049.5. Both are identified as a UltraViolet Excess Source but have no distance information.) In the Sloan image which includes near UV light, the lower section is a lot bluer than the upper. That is just the opposite of my image. This would indicate the lower part is full of super hot blue stars emitting mostly in UV light I can\'t see as my filters block UV light. My corrector plate can\'t handle that color which would fuzz up my images so I use a filter that limits my coverage to the visible part of the spectrum.

Arp put #229 in his category for galaxies with concentric rings. Arp\'s comment on NGC 507 reads: \"Circular or near circular rings of small density difference\". My first try didn\'t seem to show these rings very well. Even though my seeing was worse for this image the rings show up better.

Besides picking up a lot more of the of the group I also wanted to go deeper so waited for a night of better transparency. I noticed many of the galaxies in the original had a slight hint of extended halos about them. On this better night, I was able to pull those out of the background. Indeed a surprising number of them have halos and plumes. It appears that a large number of these galaxies have had close encounters with other group members in the past. I\'ve pushed the background to higher than normal levels and reduced the contrast a bit between the background and bright objects to better show these faint structures. I would have used more time but the skies were not cooperative.

NGC 507 is a strong radio galaxy and has an extensive X-ray emission out to about 16 arc minutes which is about the width of my image frame! The shells are likely the result of it being well fed on lesser members of the group. The X-rays due to the hot gasses ejected due to its cannibalism. It is classed SA(r)0^0^ at NED and SA(R)0°at the NGC project.

The NGC 507/WBL 038 group consists of 22 members according to NED but no size is given. It is part of the much larger ZwCl 0107.5+3212 which NED lists as containing 625 members in a diameter of 6 degrees at a distance of 220 million light-years. It is centered nearly 3 degrees to the west-southwest putting this group on its eastern edge.

Other major members of the cluster include:
NGC 483 has a very large outer ring that appears totally disconnected from the rest of the galaxy. I find no mention of this ring in the literature. NED classes it as S? and the NGC Project says S. Their visual description misses the ring as well though it is likely too faint to ever see visually. Seligman says (R)S0? so is the only one to take the ring into account. It was discovered by John Herschel on November 11, 1827

IC 1680 in the lower right corner is listed by NED as S0 with no comments. It was found by Stephane Javelle on November 29, 1899

IC 1682 to the left of 1680 is not classified by NED though a note reads: \"Elliptical red object.\" and NED calls it a \"high surface brightness galaxy\" The latter I see. But it doesn\'t appear unusually red for an elliptical galaxy though it looks more like S0 to my eye. Javelle found it the same night as IC 1680.

To the north again is LEDA 169765 and 2MFGC 1037. While a close pair optically they show no sign of interaction. So one is likely quite a bit closer. With no data on the IR strong flat galaxy, there\'s no way to tell which is closer or even if the flat galaxy is a true member of the group. I feel it is but it could be a small galaxy much closer or a huge one further away. Both galaxies are strong in IR light.

NGC 494 lies on the bottom edge. It is listed as Sab by both NED and the NGC project. At first glance, it appears quite normal but look closer and there\'s a plume on its western (right) side. In the annotated version the label covers up some of it. It was found by John Herschel on November 22, 1827.

NGC 495 to the north is classed by NED as (R\')SB(s)0/a pec: and more simply as SB0/SBa by the NGC project. That latter description would be correct but for the huge faint plumes off both of its spiral arms. That apparently is what earned it the pec label. Except for those, it looks like a typical late barred spiral. Interaction with another cluster member likely explains the plumes. William Herschel found it on September 12, 1784.

NGC 496 is a Sbc spiral. It seems to have a normal two-arm structure in the center that expands suddenly to a many arm spiral. Other than that it is pretty normal looking. It was also discovered by William Herschel on September 12, 1784.

NGC 499 is also IC 1686. It is listed as S0- by both the NGC Project and NED. It too seems pretty normal for a large galaxy of its type. Another William Herschel found that night of September 12, 1784. But it also got the designation IC 1686 when Javelle found it December 1, 1899 but gave a slightly different position than Herschel not realizing it was the same galaxy Herschel had found a century earlier.

IC 1684 and IC 1685 have no classification at NED. IC 1684 appears to be a rather normal disk galaxy sitting in a larger faint halo. NGC 1685 seems to have two cores, a brighter one well below center and a fainter one just above center. Above that is a star. I can\'t prove there are two cores, but the PSF of them in my image doesn\'t fit a star. One may be a background galaxy I suppose. Both were discovered by Stephane Javelle on March 30, 1899.

NGC 501 is a compact E0 per NED and just a compact galaxy per the NGC project. It was discovered by one of the Lord Rosse\'s assistants, R. J. Mitchell on October 28, 1856.

IC 1687 is also a compact E0 galaxy per NED though it does seem to have a bit of a halo that a compact shouldn\'t have. Javelle found it on December 1, 1899.

NGC 503 is Listed by NED as E0? and E by the NGC project. It has a faint large outer halo both seem to ignore nor is anything listed on it in the literature. Such halos are rarely seen in elliptical galaxies as far as I\'ve seen. I\'m surprised nothing is being said about it. Makes me wonder if it\'s the remains of a galaxy that lost a lot of its stars in a past interaction though it seems normal otherwise. It was first seen by Heinrich d\'Arrest on August 13, 1863.

ARK 039 is the last strongly haloed galaxy in the image. In this case, it is mentioned in a note at NED which reads: \"Elliptical red object with envelope.\" That\'s it! I don\'t see it as unusually red. It looks like a rather typical ring type barred spiral though NED classes it as S? Looks to be it should be SB at least. Though the outer halo (envelope) is very slightly red it is far bluer than the rest of the galaxy which is rather odd. ARK is the Arakelian Emission Line Objects catalog so this galaxy has rather strong H-alpha emission which would fit with it making a lot of stars but isn\'t a strong IR galaxy so those new stars aren\'t hidden behind a dense dust shield. This might explain the bluer color to the envelope area. Pure guess on my part.

One asteroid wandered into the scene, 2003 UE 21 at an estimated magnitude 19.6 according to the Minor Planet Center. 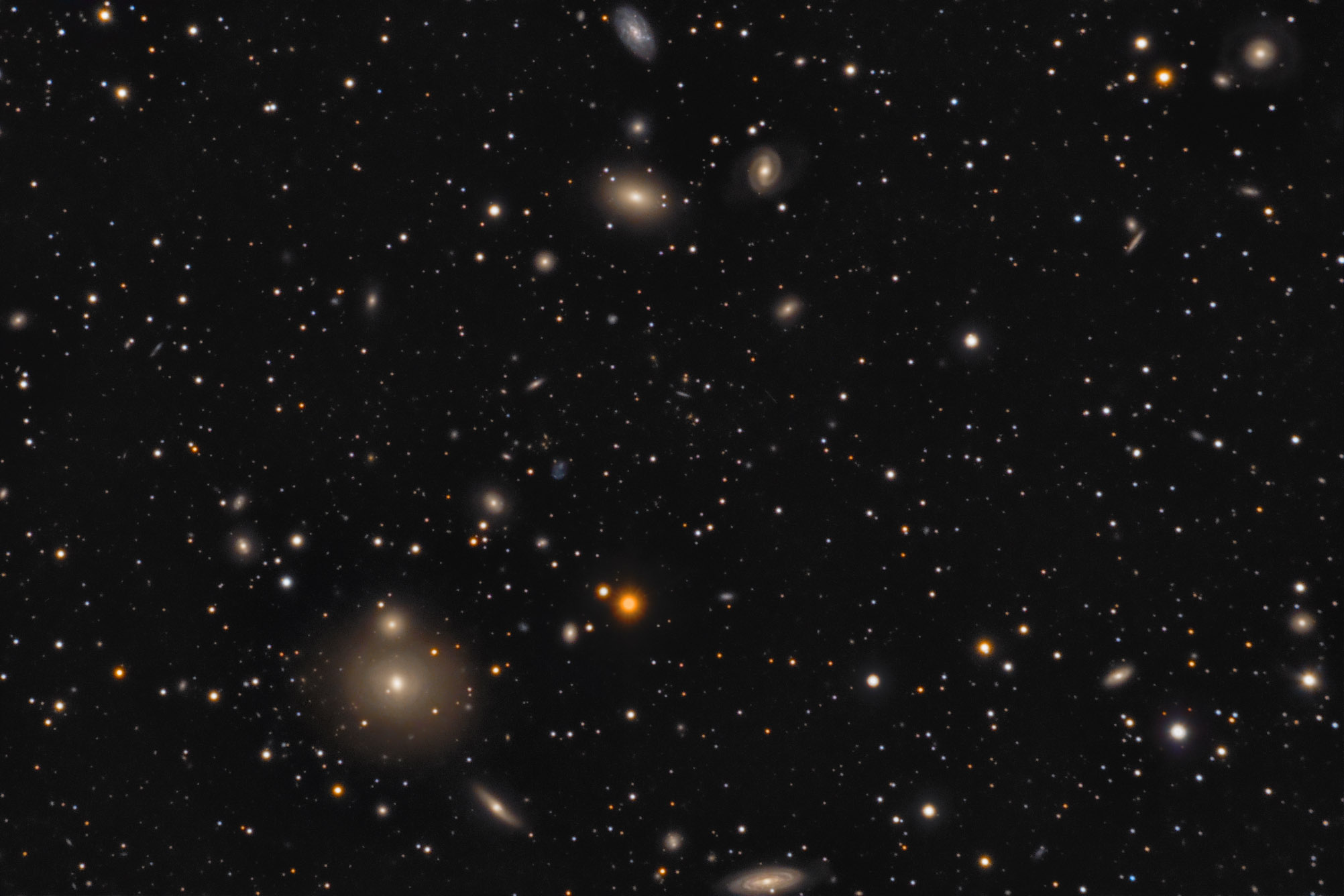 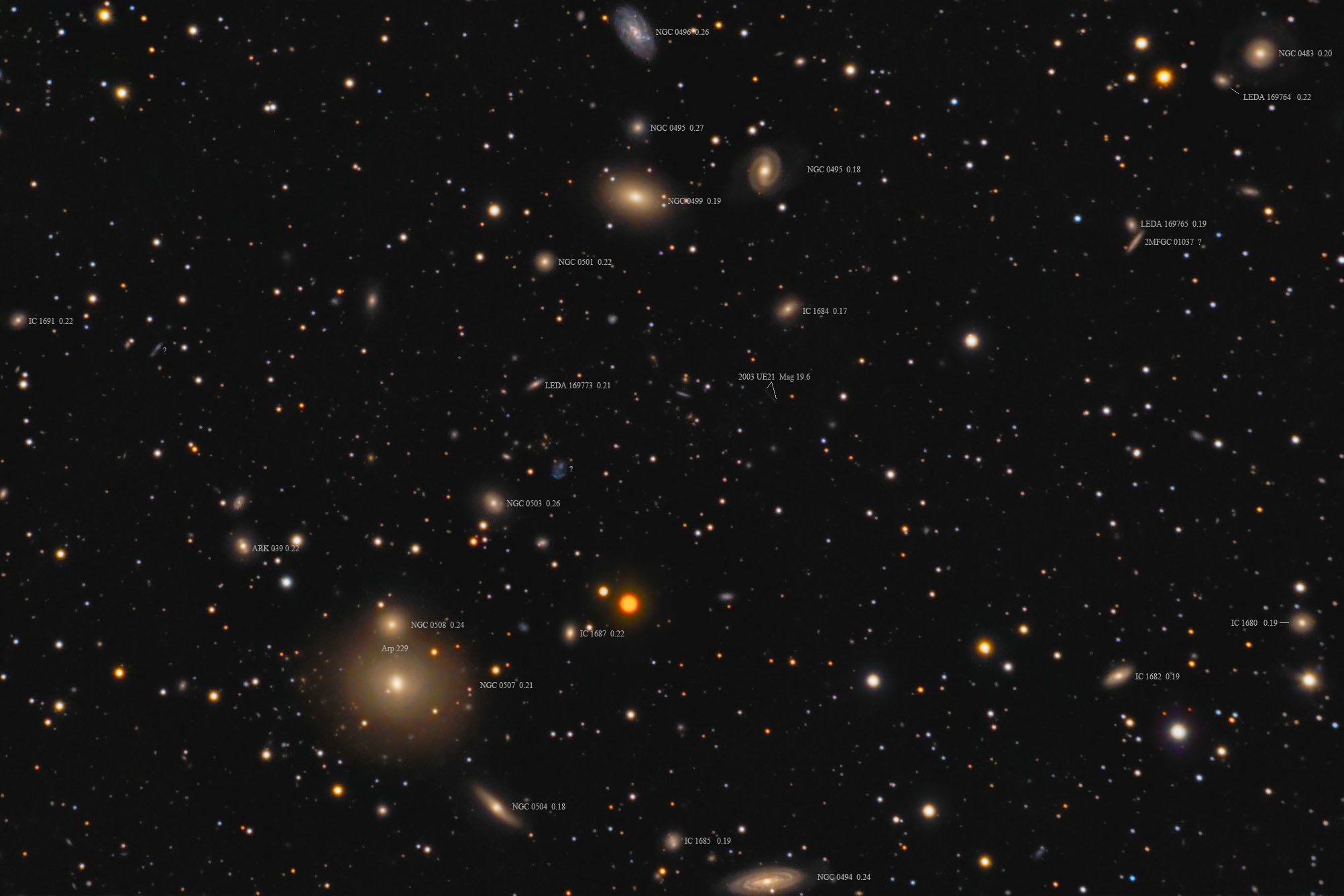 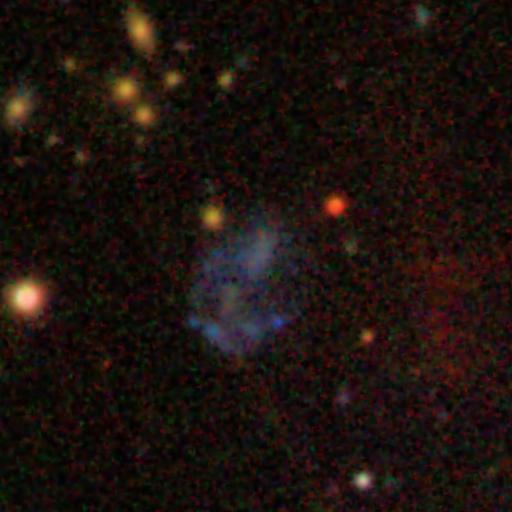