Arp 241/UGC 9425 is sometimes known as Segner\'s Wheel. Looks more like spinning tadpoles to me. It is located in central Bootes at a distance of about 475 million light-years. Arp classed it under \"Appearance of Fission.\" It\'s more a dance of death and rebirth as these two galaxies swirl about each other and likely will merge in the future to become an elliptical galaxy. The merger may have already happened but we won\'t see it for several hundred million years. Arp saw it as appearing to be the reverse, one galaxy that appears to be splitting into two. That doesn\'t necessarily mean he thought this was what was happening. He wanted to draw attention to unusual galaxies and the puzzles they create. Such a description could serve this purpose. I just don\'t know.

According to Kanipe and Webb the name \"Segner\'s Wheel\" is probably named for \"...the 18th-century Slovak scientist Janos Andras Segner, considered the father of the water turbine. Segner also built observatories at two of his academic posts.\" I\'d never heard any of this before.

A third galaxy at the same redshift is seen to the northwest of Arp 241. It doesn\'t appear to have interacted with Arp 241.

The center of the 2 billion light-year galaxy cluster Abell 1944 is a few minutes south of Arp 245. I\'ve marked the center on the annotated image. Most of the galaxies appear to the west of the center, however. At least I assume most of these faint galaxies are part of the cluster. NED shows it as 10 minutes in diameter. To its northwest is another Abell cluster, Abell 1941, at a distance of 1.2 billion light-years and a size of 14 minutes. I don\'t really see it but have also marked its center as defined in NED. Then to make things even more interesting there\'s the ZwCl 1435.5+3037 galaxy cluster toward the southwest end of the chain of galaxies of Abell 1944. It is said to be 17 minutes in diameter and contain some 180 members. It is shown as Distance Class VD. That stands for Very Distant, Extremely Distant is the only class more distant but I can\'t translate this into redshift or a time travel distance. It likely is much the same cluster but with a larger cutoff radius as Abell 1944. Anyone know for sure?

Just to add to the galaxy cluster confusion further to the southwest we come to the galaxy cluster MaxBCG J219.37724+30.37448 which is shown centered on a galaxy of the same name which is noted at NED as being a bright cluster galaxy. The cluster has an estimated distance of 2 billion light-years, no given diameter and a member count of 19. So how does this fit the others? My head hurts. But it gets worse. Just off the bottom of my image almost directly below Abell 1944 is Abell 1943 which is 12 minutes in diameter and thus extends into the southern part of the image. There\'s no distance for it other than the note it is distance class 6. This puts its members in the 17.3 to 18 magnitude range for the tenth brightest cluster member. Since it is richness class 2 -- 80 to 129 members I\'m not sure how that helps much other than the most distant class is 7 for all below 18th magnitude. How this translates to distance is beyond me. On average I suppose fainter is more distant. Is that true of the 10th brightest member? Now I really have a headache.

Migraine time! In the upper right corner is the galaxy and galaxy cluster MaxBCG J219.17017+30.59602. The anchor galaxy is quite large but has no redshift measurement that I could find. The estimate for the cluster is 1.5 billion light-years but all around it are galaxies of 1.3 billion light-years by redshift. Are these members? The cluster is described in NED as having 15 members, no size is given. Several more galaxy clusters are to be found around the edges of this image that likely extend into it but enough is enough. I\'ve used up my painkiller supply just getting this far.

I do find it surprising there were no quasars in the image considering how deep it goes. One was just off the image to the south but NED listed none within the image. But as there are a couple very distant galaxies at 4 and 4.2 billion light-years in the frame.

One blue frame was severely hurt by haze or something. I used it anyway but maybe I shouldn\'t have. It seems to have hurt color more than helping. I didn\'t go back and try with only the good blue frame or retake it. 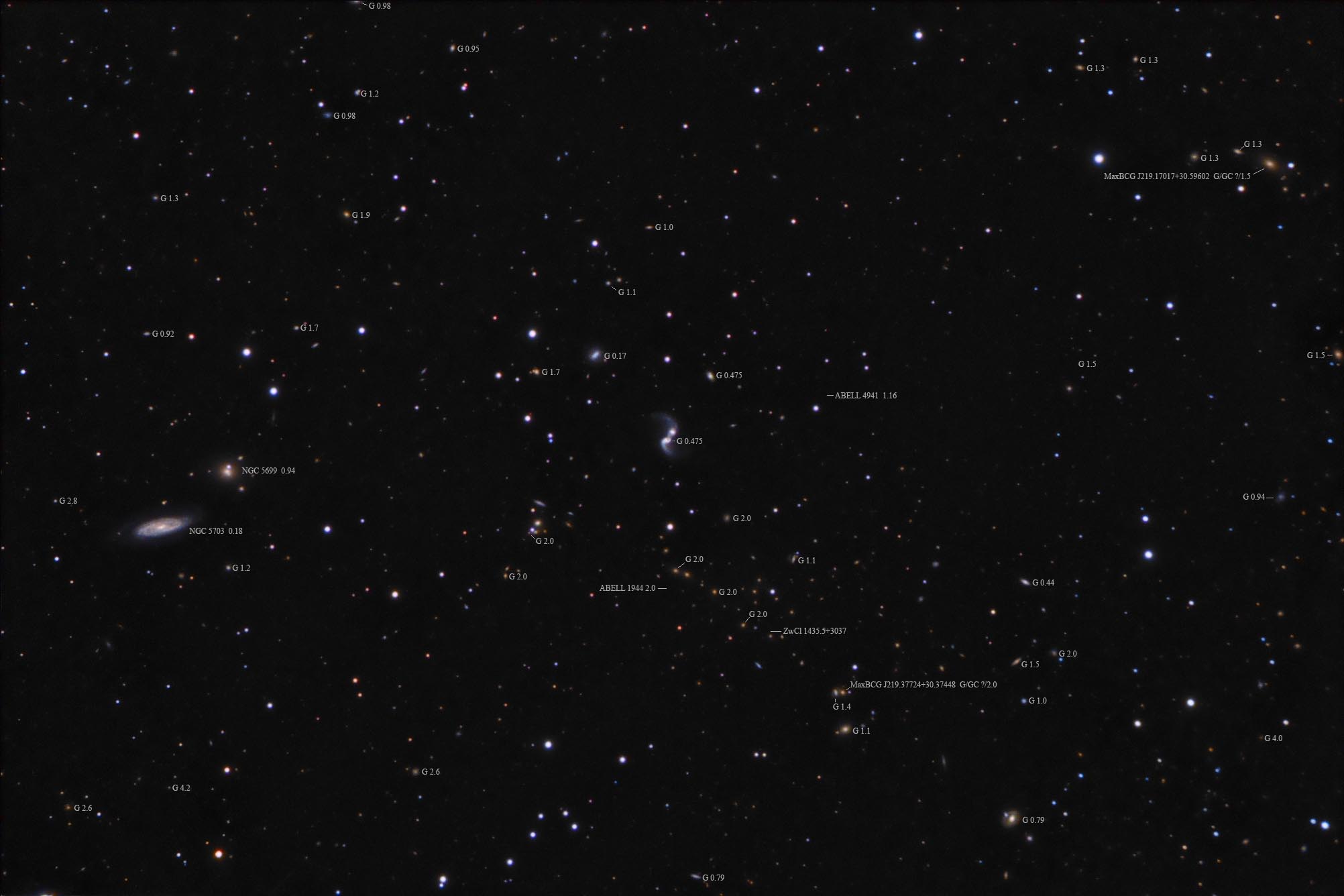 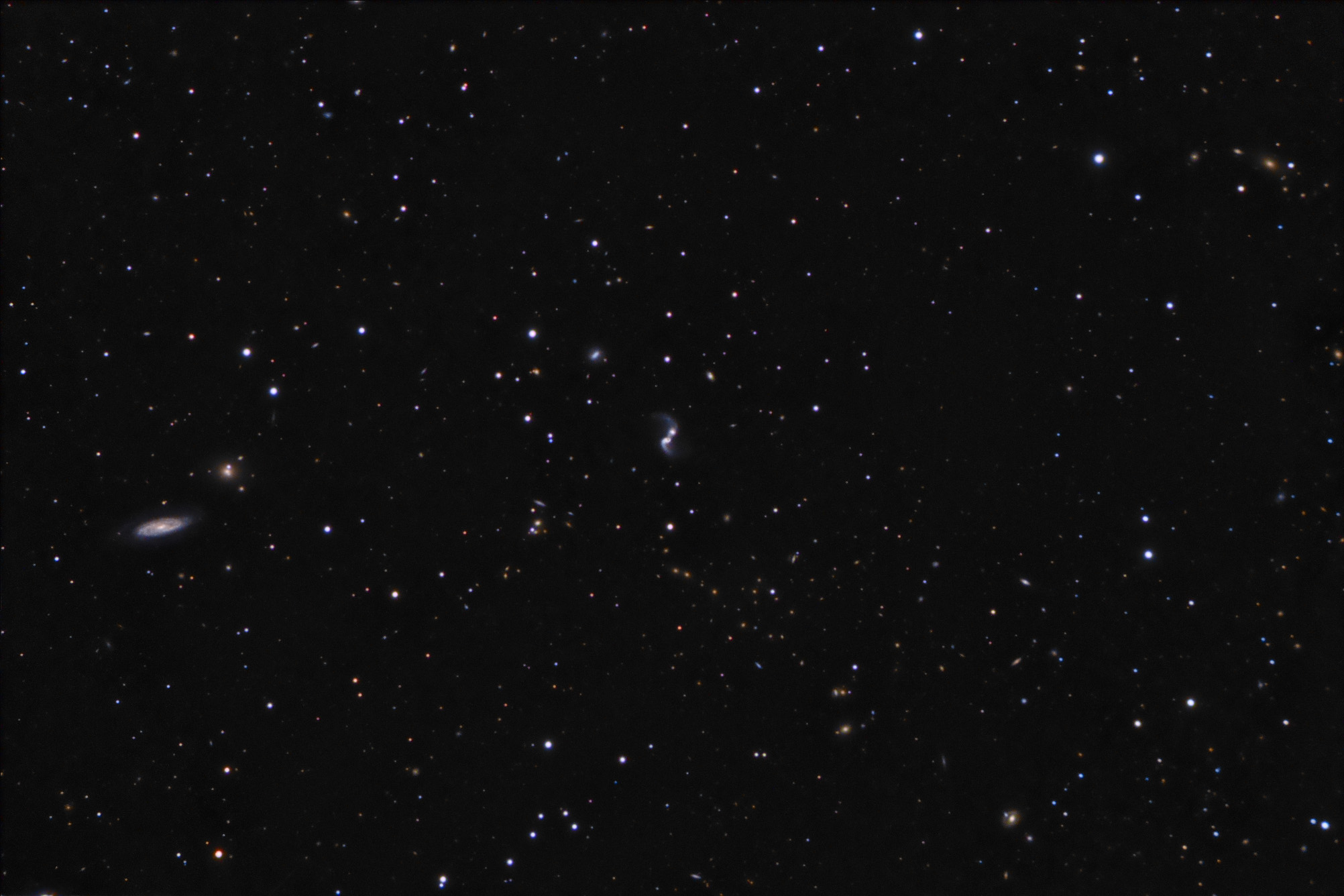 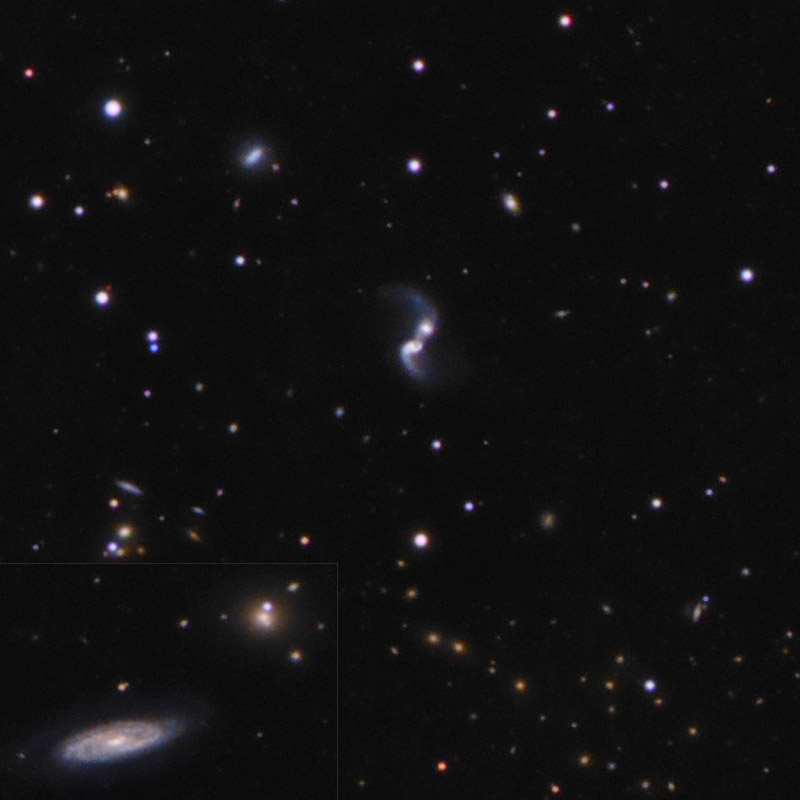