Arp 244/NGC4038-9 are almost too low for my scope to see. Certainly too low to see clearly being below my normal 15 degree south limit. But they are so interesting I had to try anyway. These are known as the Antenna, clamshell or Ring Tail Galaxies. NGC 4038 and 4039 are a much-pictured pair of colliding galaxies. Massive star birth has been triggered by the collision and huge tidal arms (the antennae) pulled out of them. When galaxies collide the dust and gas do collide but the stars do not. They are just far too small and too far apart for that to happen. But the gravity field is so strong that it can tear stars out of the galaxies and throw them across the universe as seen in the two tails of these galaxies. If your monitor can see into the darkness well enough you can see the lower (longer tail) actually starts to curve back on itself. These two are thought to be about 65 million light-years away in the constellation of Corvus. The Hubble telescope took this photo of the upper galaxy in my shot (NGC 4039). http://imgsrc.hubblesite.org/hu/db/1997/34/images/d/formats/full_jpg.jpg and http://cseligman.com/text/atlas/ngc4038noao.jpg
Hubble can resolve individual stars in a galaxy at this distance thanks to not having to look through our atmosphere.

The \"stars\" you see in the galaxies are really huge clusters of supermassive stars created by the collision. Some are still shrouded in their Hydrogen and dust cloud from which they formed. The hydrogen glowing its characteristic pink-red color. Others have completely used up the hydrogen and glow blue though some hydrogen emission can be seen on their edges. Note I\'ve pushed the color to extremes here to show these features. The true colors would be much more muted if your eyes could actually see them. Which they never could from any vantage point as they would be just too faint.

The galaxies were discovered by William Herschel on February 7, 1785 and are in the original Herschel 400 observing program. My notes from that made on April 16, 1985 using my 10\" f/5 at 50x hampered by how low it was even in Nebraska and the extinction from high humidity reads \"Large, fairly easy object, mottled a little brighter toward the center. This was limited to NGC 4038 as 4039 wasn\'t in the program. I didn\'t see the tails.

This was taken back early 2007 when my imaging techniques were poor. It is severely photon starved. I\'ve had it on the redo list for years but conditions just haven\'t made this possible. Until then this will have to do. 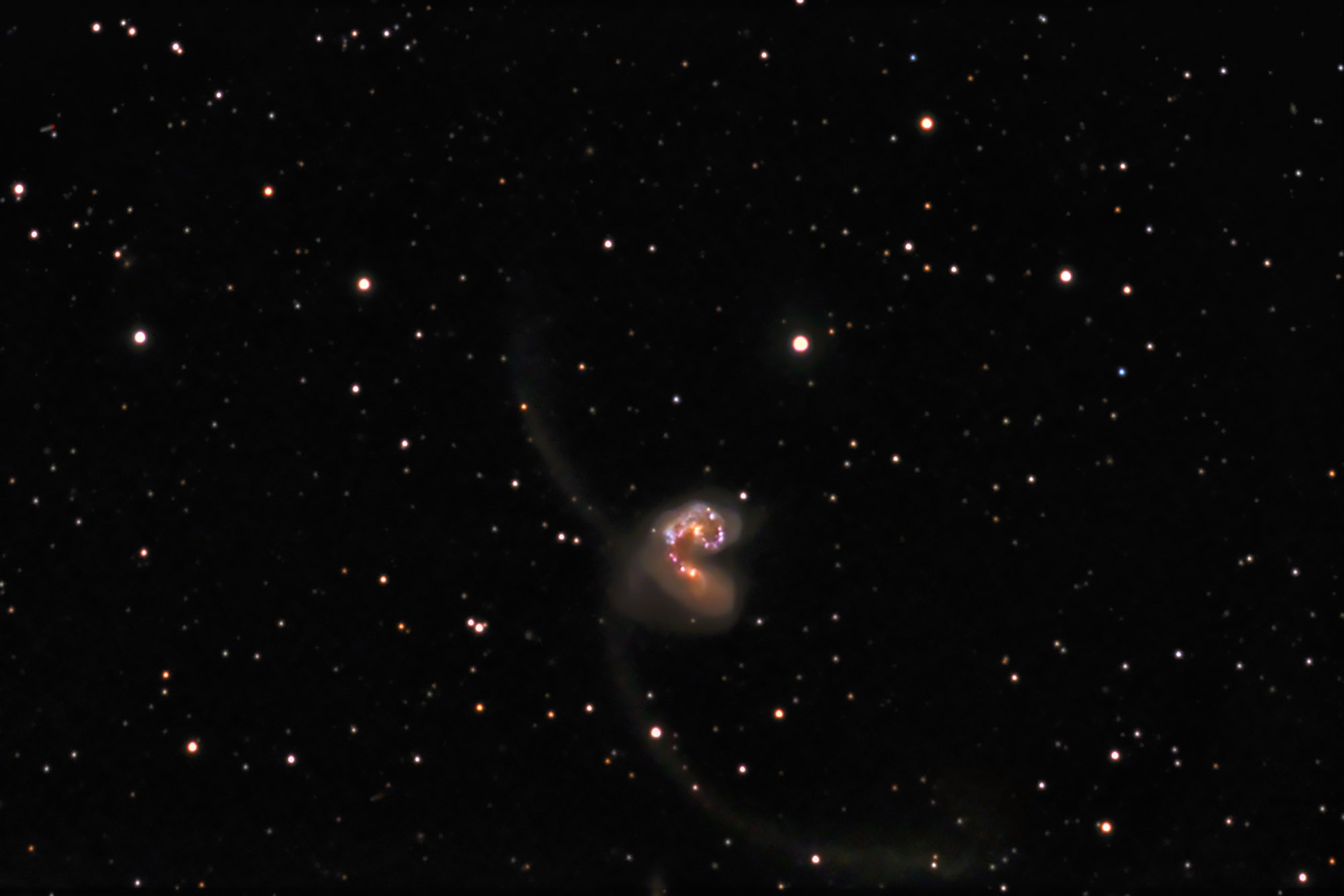