Arp 245/NGC 2992-3 is a great pair of interacting galaxies in Hydra. Redshift puts them at about 125 million light-years but most papers are going with the Tully-Fisher distance of 100 million light-years. In any case, they are close and large enough to actually make an interesting pair to image. Arp put them in his category galaxies with the appearance of fission. I think he only meant they appeared to be dividing not that they really were. Of course, they are now known to be interacting galaxies that may be merging rather than splitting. Arp\'s comment on these is; \"Very faint diffuse connection from both ends of N spiral to S spiral.\"

The N spiral is NGC 2992 and the S spiral is NGC 2993. Both were discovered by William Herschel on February 8, 1785 but aren\'t in either of the Herschel 400 observing programs. While NGC 2992 appears red in my image and is indeed a strong IR source it is also a very strong UV source and well seen in the X-ray spectrum as well. It has a highly variable Seyfert Core. Papers argue between Seyfert 1, 1.9 and 2 status with 1.9 being seen most. All of this is rather expected from such a strongly interacting pair. I don\'t know if its overall red color is due to stars or dust absorption. I suspect the latter. NED classes it as Sa pec while the NGC project just says Pec. NED gives the northern plume the designation of Arp 245N listing it as a tidal tail.

NGC 2993 is a near face-on spiral with a large bright core, some say is double though I was unable to see this. It is much bluer than its companion. It too has a lot of star birth going on in its core. NED also says it is Sa Pec with HII emissions. The NGC project again says simply Pec. Of the tidal plume between the two galaxies, it is hard to say which galaxy it comes from, possibly both I would suspect. I say this because the plume seems to change from slightly reddish to slightly blue as you get closer to the blue galaxy. The change is rather abrupt in fact. I\'d love to see this pair from another angle to see what these tidal plumes are doing. Is the \"connecting\" plume really connecting or does it go behind or in front of NGC 2992? There is a lot of papers listed at NED, I could take a month to read them all, maybe the answer is in them someplace my quick overview missed. Unfortunately, this pair is barely above 15 degrees south so has rather strong atmospheric extinction. Didn\'t help this wasn\'t taken on a good night like Arp 244. Thus the connection between the two is very weak in my image. Another I need to retake but never have.

While this field is not covered by the Sloan survey a couple of unusual objects are among the few NED has data on. One is the very blue star just to the east of the tip of the northern plume of NGC 2992. NED gives it catalog listings. UITBOC 1574 (Ultraviolet Imaging Telescope Bright Object Catalog) saying it is a visual source which tells us nothing useful. Another name for it is [BOB94] 0943-1403 (Bowen+Osmer+Blades catalog of galaxies and quasars) which lists it as a quasar. So far so good. Many quasars are very blue. In fact when they were still a mystery one name for the blue ones was blue stellar object. But then we come to its redshift which says it is only 20 million light-years distant. Normally we\'d easily see the galaxy it was in at that distance and the quasar itself should be exceedingly bright not magnitude 17.5. Maybe it is just a super blue star? Redshift error? (I had to go back and correct my typo for \"shift\" -- I left out the \"f\" -- maybe I was trying to tell myself something.)

Less confusing is the third galaxy in the group, the thin flat one to the southwest (lower right). It is FGC 938/RFGC 1621. Either indicate it is an extremely flat galaxy (FGC=Flat Galaxy Catalog). Its redshift is also about 125 million light-years so it may be a member of the same group as Arp 245, just not close enough to be interacting. It is classed Scd (as are most entries to these catalogs). How some spirals get to be so flat with virtually no central bulge is still a mystery. Since the size of the bulge seems related to the size of the black hole at a spiral galaxy\'s core does this mean it has no black hole in its core? Just an unusually small one? I don\'t know. Anyone out there seen anything on this?

Only 2 other objects, both galaxies, are listed in NED with redshift data. Both can be seen near Arp 245. Directly above the blue star/quasar is a small smudge of a galaxy. It is somewhat blue in color. It is [DBS2000] J094545.55-141623.7 at 1.44 billion light-years. That\'s the only designation NED has; DBS stands for Duc+Brinks+Springel. The other galaxy is up and to the left of the last one. It is the third (bottom) object of a small arc of two stars and the orange galaxy. The upper star is orange while the middle star is white. The galaxy is quite orange. It is 2MASX J09455121-1415430 with precisely the same redshift (z=0.111000) as the other galaxy and thus also 1.44 billion light-years distant. None of the other galaxies in the image have redshift data and most aren\'t even listed at NED. 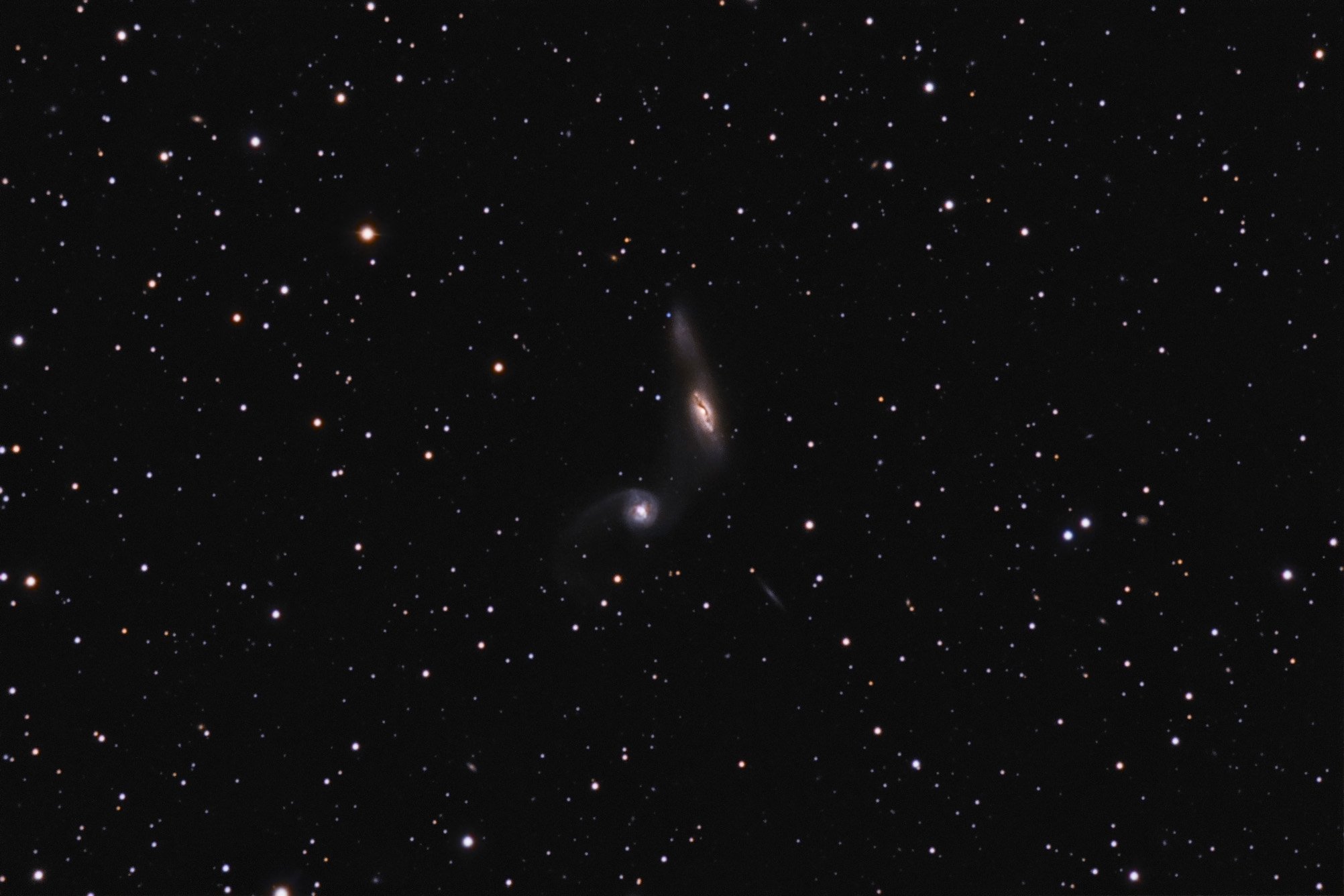 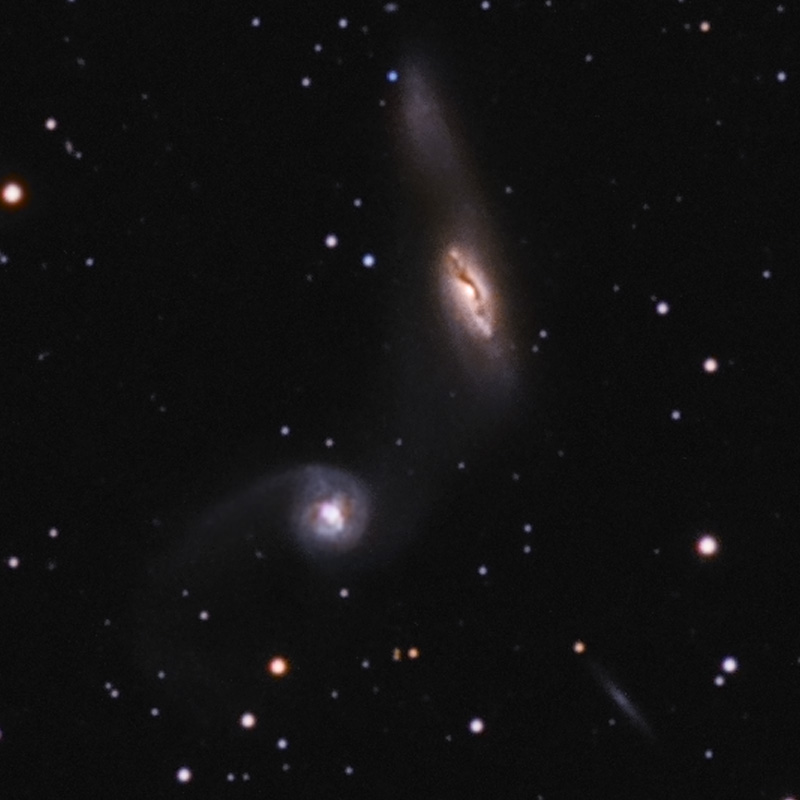