Exactly what constitutes Arp 258 is a bit difficult to determine. Some sources are quite inconsistent from page to page in this regard. Some say it is just the chain of debris plus one galaxy at the bottom all collectively known as Hickson 18 or UGC 2140. Others leave off the bottom galaxy as it is a distant interloper. One that leaves off the bottom one on one page includes it on another and adds the two anonymous galaxies to the west. So take your pick.

The upper string carries three entries in the PGC/LEDA catalog 10042, 10043 and 10044 top to bottom. The top two are blue, 10044 is more orange. The redder galaxy below this is 10046 in that catalog. The first three have a redshift indicating a distance of about 175 million light-years while the bottom one shows the much greater distance of 445 million light-years. Way too big of a difference to be considered part of the group. While the upper part carries 3 PGC numbers it is made up of a lot more pieces. Some papers say there are 6 galaxies in this group. I could argue for even more as the upper part alone has 7 bright condensations. The lower part is drawn out into two longer pieces or is it just one piece darker in the center? Then there\'s the debris cloud that is spread across the whole mess. I can find no data on the two galaxies to the east. They, like PGC 10046 appear unrelated to the smash-up. One is a near starlike elliptical and the other an S0 galaxy. PGC 10046 is classed as SB0. Arp\'s comment on the blue parts: \"Resolution into knots on larger galaxy.\" Or is he referring to the two parts of the somewhat orange one that\'s so torn apart? I don\'t know.

PGC 10042 is listed as Im. Exactly how much of the upper part of this mess it is considered to be is hard to tell. Its dimensions of .6 to .7 minutes covers most of the northern pieces, 6 in all.

PGC 10043 seems to consist of the northern part of the elongated double southern half. It too is classed as Im but is shown as .7 by .4 minutes which must include some of the debris cloud.

PGC 10044 is another mystery. NED considers it the entire group of 3 galaxies while most other sources consider it the bottom part of the three. In any case, the bottom part is also classed as Im. Likely because they had no idea what the heck is going on here.

Something has certainly disrupted whatever this was before the encounter. So there were at least two objects here. We now see many pieces. Likely they will combine to form one elliptical galaxy in the future. But for now, it\'s one big mess. I couldn\'t find many papers trying to straighten it all out either. A couple however referred to it as two disrupted galaxies, another a faint spiral and fragments and yet another as 6 galaxies. Based on the color in my image, it appears the 2 galaxy idea might be right as one is somewhat blue while the other reddish. To me, the scientific name for that type of agreement is to call it a mess. Though it deserves an adjective I can\'t use here.

The galaxy to the SE of the group is 2MASX J02393096+1819089 ID Other than it being an IR emitting galaxy in the 2 micron IR survey I have little on it. The same applies to the smaller galaxy to its southwest. While a few other IR galaxies are in the field none have much information other than position. At least I can identify the 3 asteroids in the image!

Directly east of Arp 258 is what appears to be another asteroid. It isn\'t one. I suspect it is a distant edge on galaxy. It just barely shows in the POSS two plates. This isn\'t an area covered by the SDSS survey. It is too faint for other surveys so, for now, is anonymous. 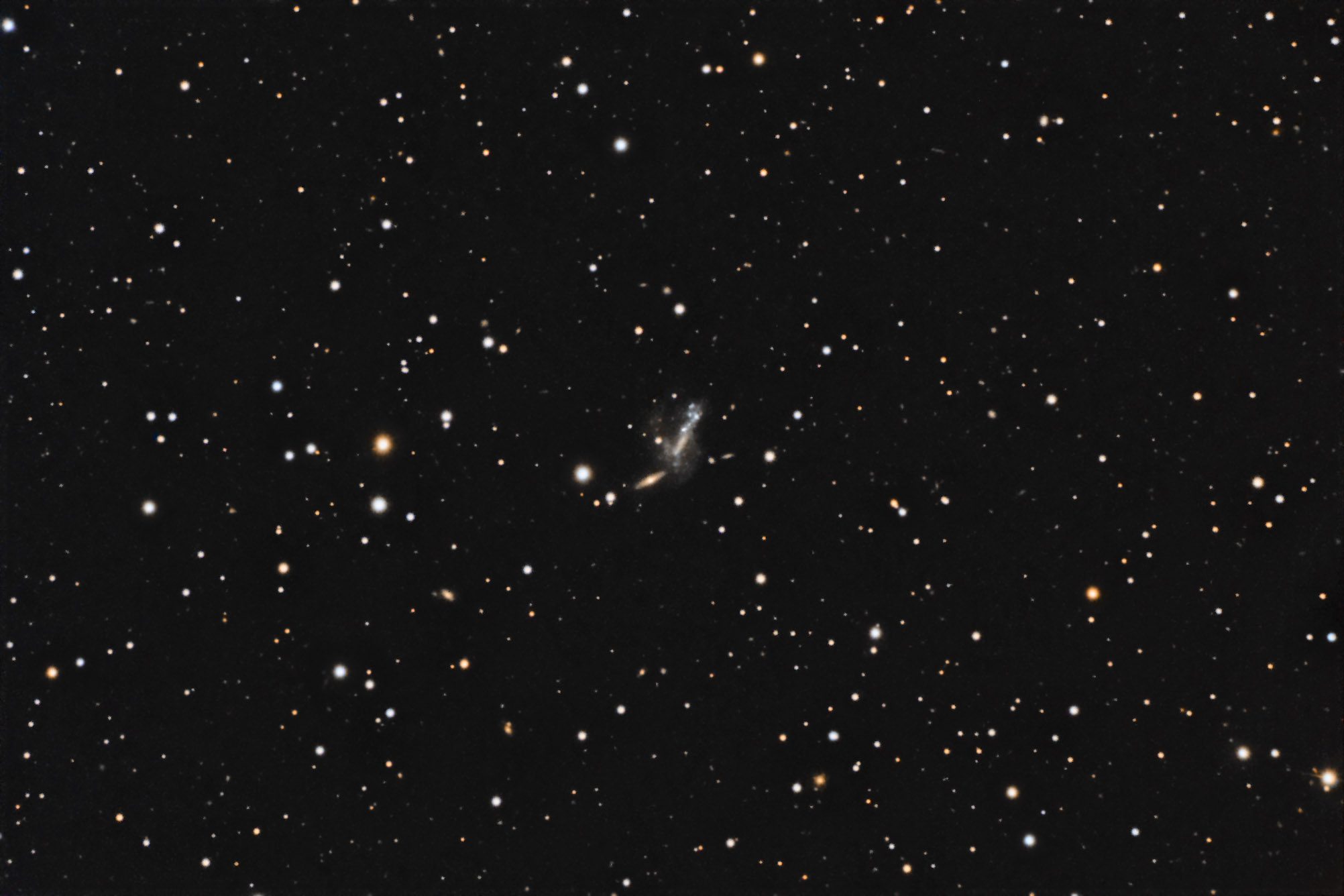 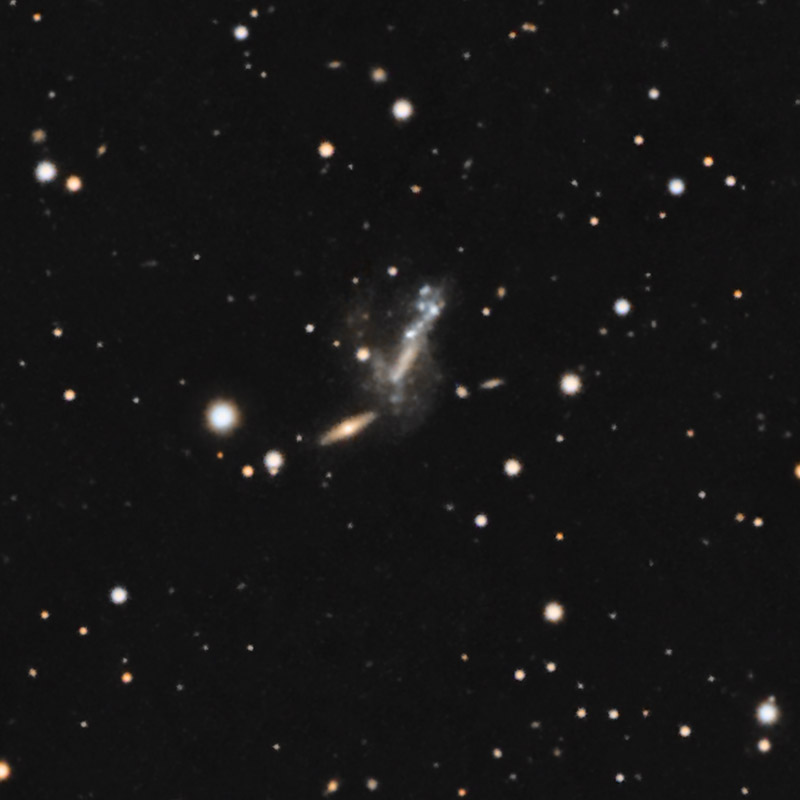