Arp 266/NGC 4861/IC 3961 is a rather strange galaxy about 50 million light-years away in Canes Venatici. Arp classed it under Galaxies (not classifiable as S or E): Irregular clumps. It appears much like an irregular galaxy that consists of mostly a chain of OB star clusters in HII regions. Most are star-like except for the huge region at the south end. Most classify it, however, as an SBm. Looking through the Hubble archive I found a 160 second image of the OB groups in the galaxy. Most were severely underexposed and so noisy I didn\'t try to clean up the image. But the region of the huge association at the south end was so bright the exposure time was sufficient though lots of hot pixels remained and some artifacts they put in processing it. It doesn\'t resolve individual stars in the association but the HII emission is really is obvious. If I find time next spring I\'ll try adding some HII data which should make these HII regions really pop out in H alpha red. The line of bright dots extending to the upper left is the gap between CCDs in the camera, not real objects.

The galaxy was discovered on May 1, 1785 by William Herschel. It isn\'t in either of the Herschel 400 observing programs. On March 21, 1903 Max Wolf found it but gave a slightly different position so it was recorded as IC 3961.

This image was taken through some heavy haze over the lake that really did a number on my blue and green data, especially blue. I\'m not confident of the color balance as a result but think it close, maybe a bit weak in blue if anything. Due to the haze, the two bright stars at the upper left really did a number on the image sending a fog across it. In removing it and due to the low transparency, even though this used twice the luminosity data I normally use I wasn\'t able to go very deep. So there\'s nowhere near the normal background galaxy count. It didn\'t help that I tried a couple new processing techniques that, while helping the galaxy further reduced the depth of the image. I should have masked out much of the image before applying these but didn\'t do so. But thanks to them the little galaxy at the far left above center, beyond the lower bright star shows far more detail than it would under my normal processing. It is MCG +06-29-011 at 375 million light-years. I\'ll know better next time how to prevent this loss to faint regions. Since the galaxies came out well I didn\'t go back and redo the processing.

The bright galaxy above Arp 266 and a bit left is LEDA 101479 at 54 million light-years. Its redshift is so close to that of Arp 266 that it is reasonable to say it is a member of its local group. At the top of the image well left of center is the very faint trail of the asteroid (132462) 2002 HT12. It\'s estimated magnitude was listed as 18.6. It seems quite a bit fainter than that. Normally such an asteroid would be very obvious. likely the poor transparency had something to with its faintness as well.

The most distant galaxy in the image I found is SDSS J125829.54+345804.1 at 4.6 billion light-years. To find it start with Arp 266 and go northeast to two rather bright blue stars with two orange stars between them that point at almost a right angle to the line connecting the blue stars. These orange stars point right at a very bright blue star. Beyond the blue star, a bit south of the line the two orange stars define is a fainter orange \"star\", is a galaxy. It is 21.4 magnitude and was thought to be a star until its spectrum showed it to be a distant galaxy.

I\'ve included a black and white HST image of the star cloud at the southwest end of the galaxy. 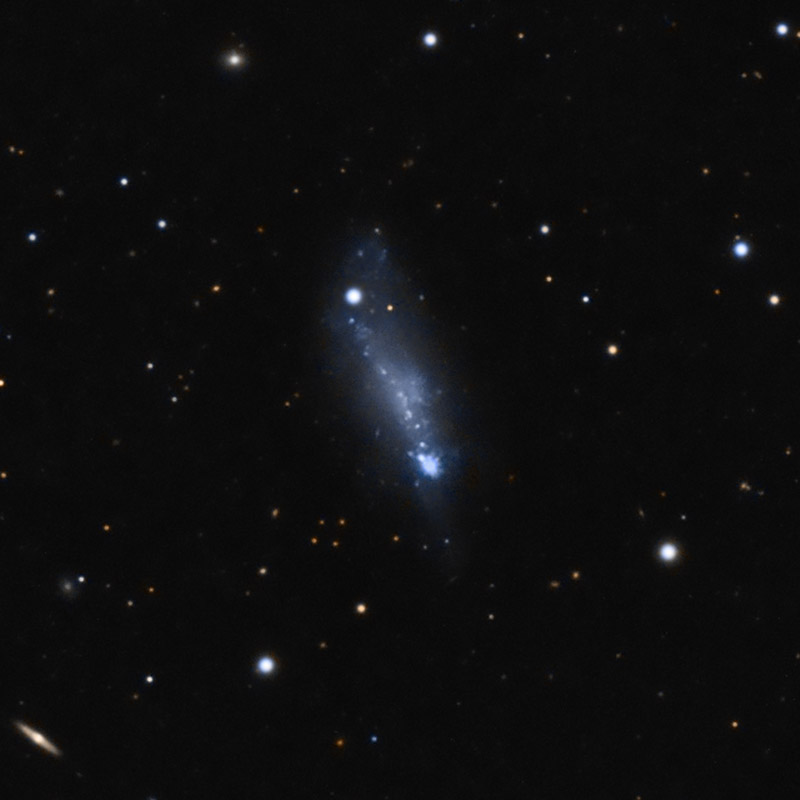 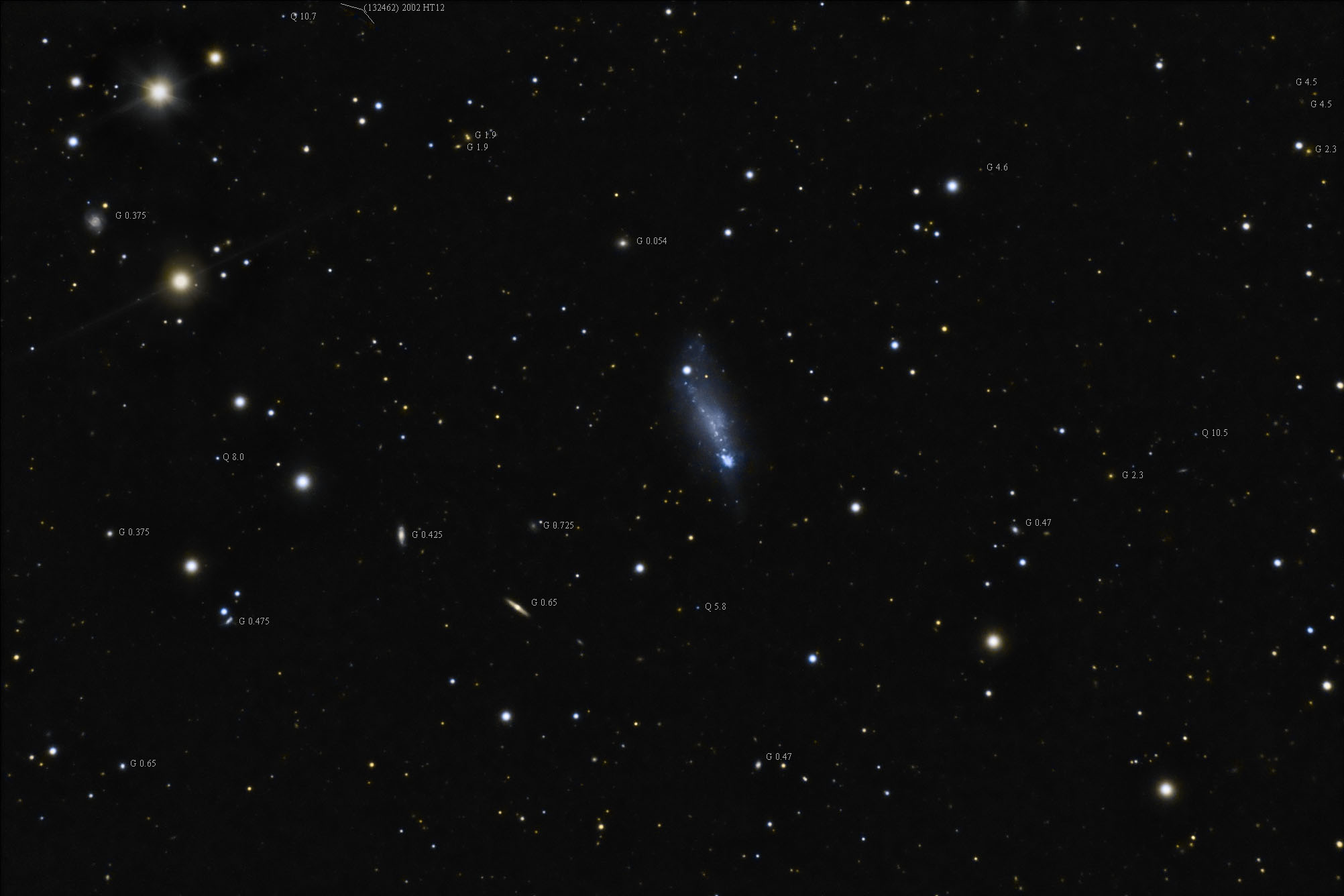 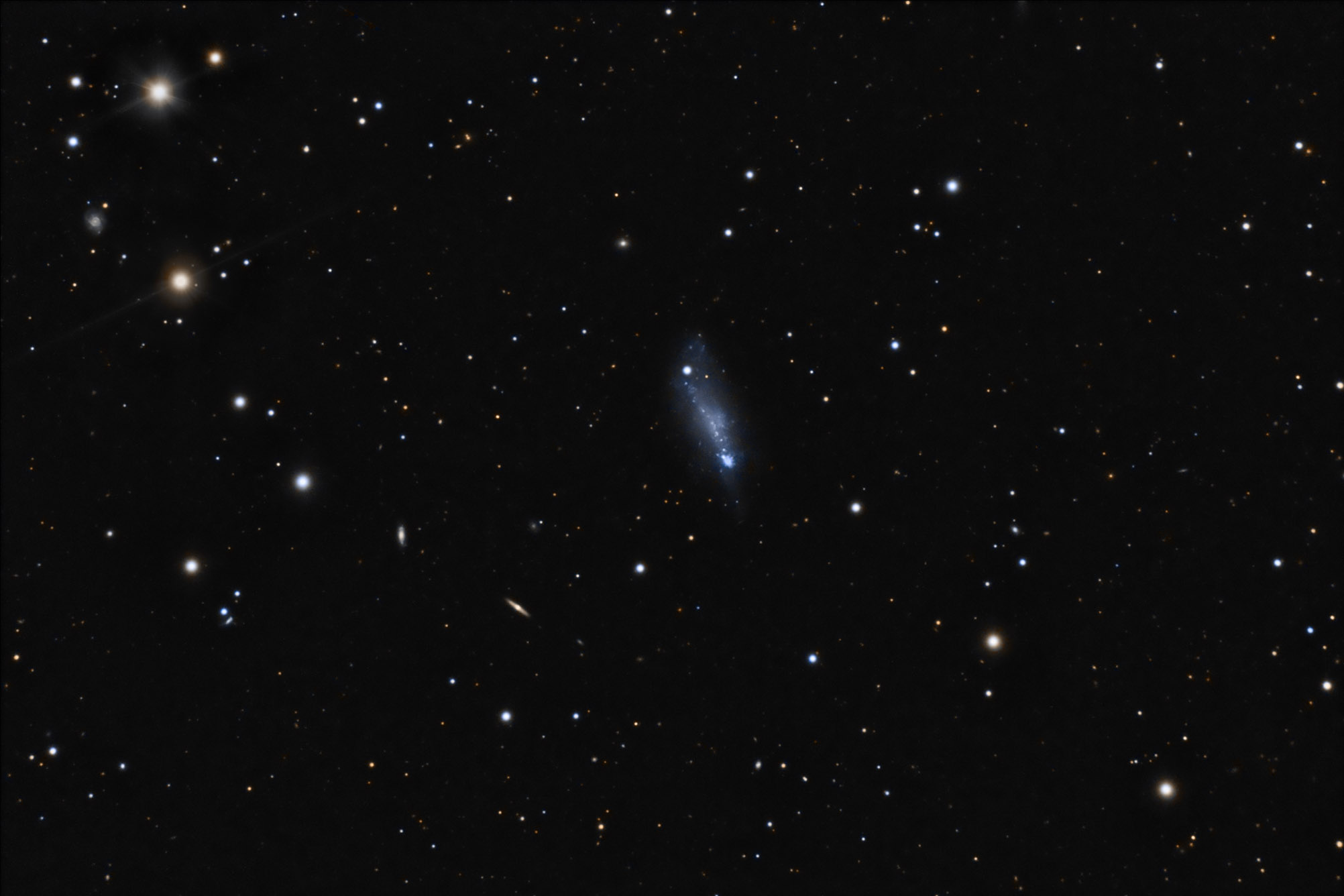 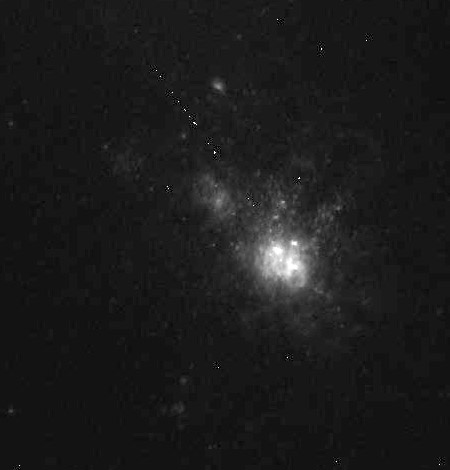