Arp classified Arp 267 in galaxies (not classifiable as E or S): Irregular clumps. He said of it: \"Semi-stellar nucleus, faint oval ring outside.\" I\'m not sure which of the knots he is considering the \"semi-stellar\" nucleus. The big blue one is an HII region where most of the current star formation is going on. It\'s their blue light that gives it the color. Or is it the fainter only slightly blue object under it? It is closer to the center. Or is it the condensation in the only slightly orange area to the NE? It\'s far off center but of the right color for a galaxy \"core\". Though an irregular galaxy isn\'t called irregular without reason. I doubt this one even has a nucleus.

The galaxy is known as UGC 5764 and is classed as IB(s)m and is located in Leo Minor. It is a very low surface brightness irregular, dwarf galaxy. Notes at NED indicate there is little current star formation but its blue color would indicate it certainly had some major star formation not all that long ago as current formation doesn\'t appear sufficient to keep it blue for long. The disk also appears warped. I\'m puzzled by the orange core appearing to be at the NE (upper left) end of the galaxy. Nothing in the notes indicates there even is a core let alone it being off center. But this is an irregular galaxy and one odd enough to make Arp\'s list. At first, I thought that with such weak color data due to its faintness my color was at fault but then I looked at the SDSS image and even in their super enhanced color image the area where orange stars dominate is the same as in my image. As with most Arp galaxies, Hubble hasn\'t imaged it.

The galaxy\'s redshift indicates a distance of about 40 million light-years so this is a rather close but very small, faint galaxy. But then NED also lists a redshift independent distance estimate of only 22.5 million light-years. I\'m no expert in the Tully-Fisher relationship of spiral galaxy rotation rate to its actual luminosity, the method used here. Luminosity varies as the 4th power of rotational velocity at the core. I don\'t know how reliable it is when applied to irregular galaxies. Notes do say its rotation curve is normal near the core so it may work here. But at 22 million light-years Cepheids should be visible, they are a primary standard candle, T-F relationship is a secondary one. So Cepheids would be a far more reliable method. Since this wasn\'t used it makes me wonder about this distance estimate. The lack of Cepheid data might imply a distance too great for them to be seen. Though they are usually easily seen at 40 million light-years, getting too far at 100 million light-years. Recently a new class of super long period Cepheids has been discovered. They are bright enough to extend the primary standard candle to 300 million-light years in galaxies with them. Apparently, no one has used a large scope on this one to look for Cepheids. I just am not seeing enough detail in my image to support the nearer distance nor in Arp\'s image.

For those who like to compare dwarfs to giants, note the only other galaxy in the image to show much detail toward the left edge and above Arp 267. It is 1,100 million light-years away, 27.5 times further away yet is about one-third the angular size of Arp 267. It\'s rare for me to see much detail in a galaxy at that distance.

This image contains the most distant object I\'ve imaged, at least that I know I\'ve imaged I should say. Of course, Arp would disagree. It is the quasar SDSS J103711.04+313433.5. It has a Z of 4.89 for a distance of 12.5 billion light-years using 5 year WMap data at NED. It is so far away it is no longer blue. Few quasars are seen at this distance, the universe was just too young for them to have fired up yet. It would be another 8 billion years before the earth was formed for instance! At the common distance for quasars, they shine with a very blue light as they are super hot glowing mostly in the ultraviolet. This is then red-shifted to blue light by the universe\'s expansion. But this one is so far away and moving away so fast the ultraviolet has been shifted down into the infrared! In fact, it shines at magnitude 19.5 in the infrared but at magnitude 24 in blue light. I can\'t be more exact as it varies greatly at this frequency. Looking at the Sloan data it varied from 24.3 to 26.1 in their green filter that also picks up blue. Yet it held very constant at 20.7 to 20.8 in the red filter and even more constant at 19.5 in near infrared. Since my camera is very insensitive to red light it is seeing the overall brightness of it at about 22.7 and thus very near my limit for this night. Trying to wrap my mind about seeing something at this distance with my system is just impossible. When I started imaging over 50 years ago even 200 million light-years seemed beyond anything I could dream of imaging using my wildest imagination. Two billion light-years was at the known limit for the 200\" at the time. Imaging something this distant seems as impossible to me as landing on the moon must have seemed to my grandparents (none of whom lived to see it).

The annotated image shows galaxies and quasars over 1 billion light-years distant that I found in NED. Note that doubling z doesn\'t double the distance if z is large (above .5 or so). Fortunately, there are calculators on the net that make dealing with this far easier than doing the math yourself, unless you\'re a masochist that is.

Two very bright (for my images) asteroids show up in the image. Glaring at us directly west of Arp 267 is the 157th asteroid, Dejanira shining at about magnitude 13.4. Almost directly above Arp 267 at the very top is asteroid # 70643 known as 1999 TE242 at an estimated magnitude of 18.7. Seems brighter than that to me. 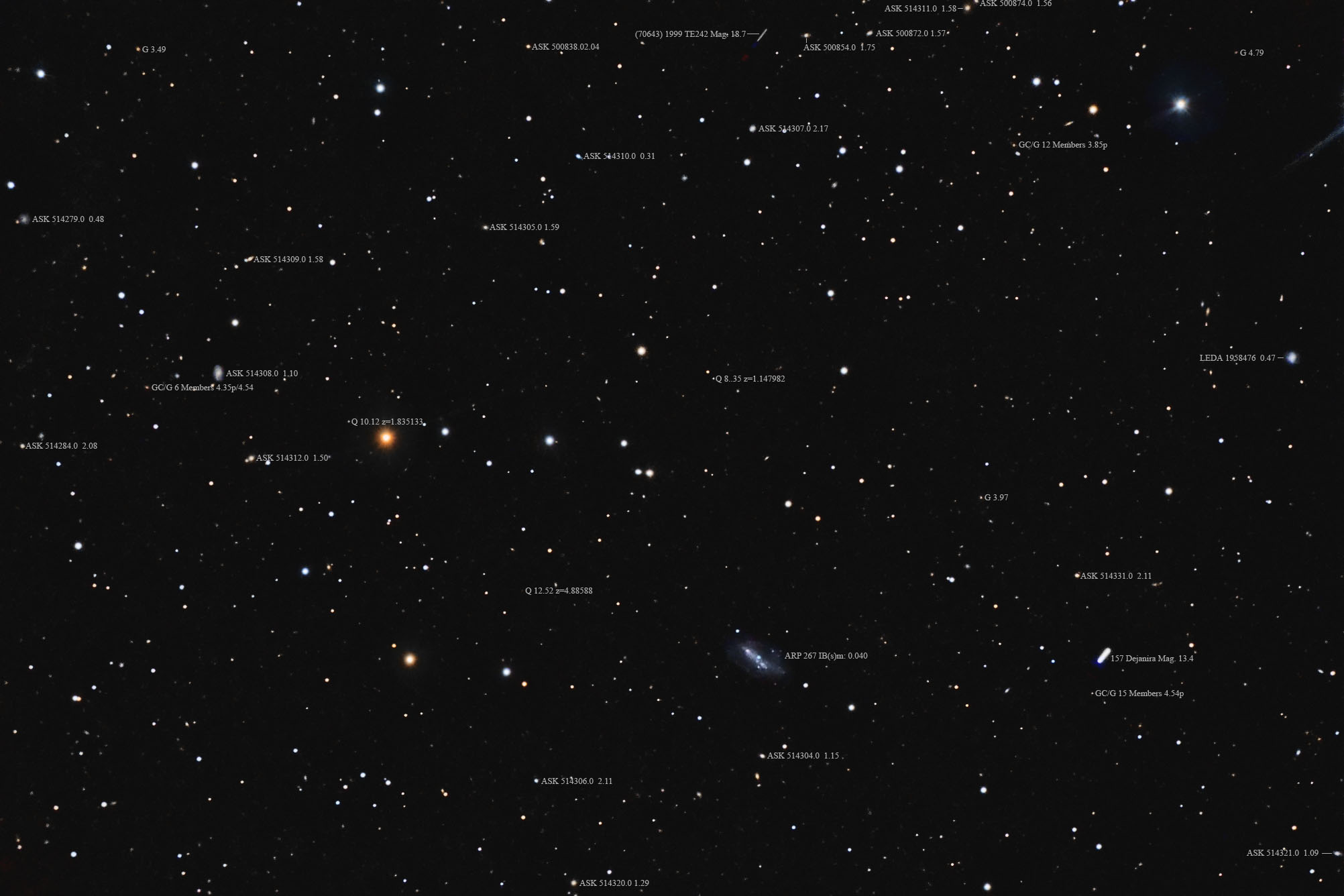 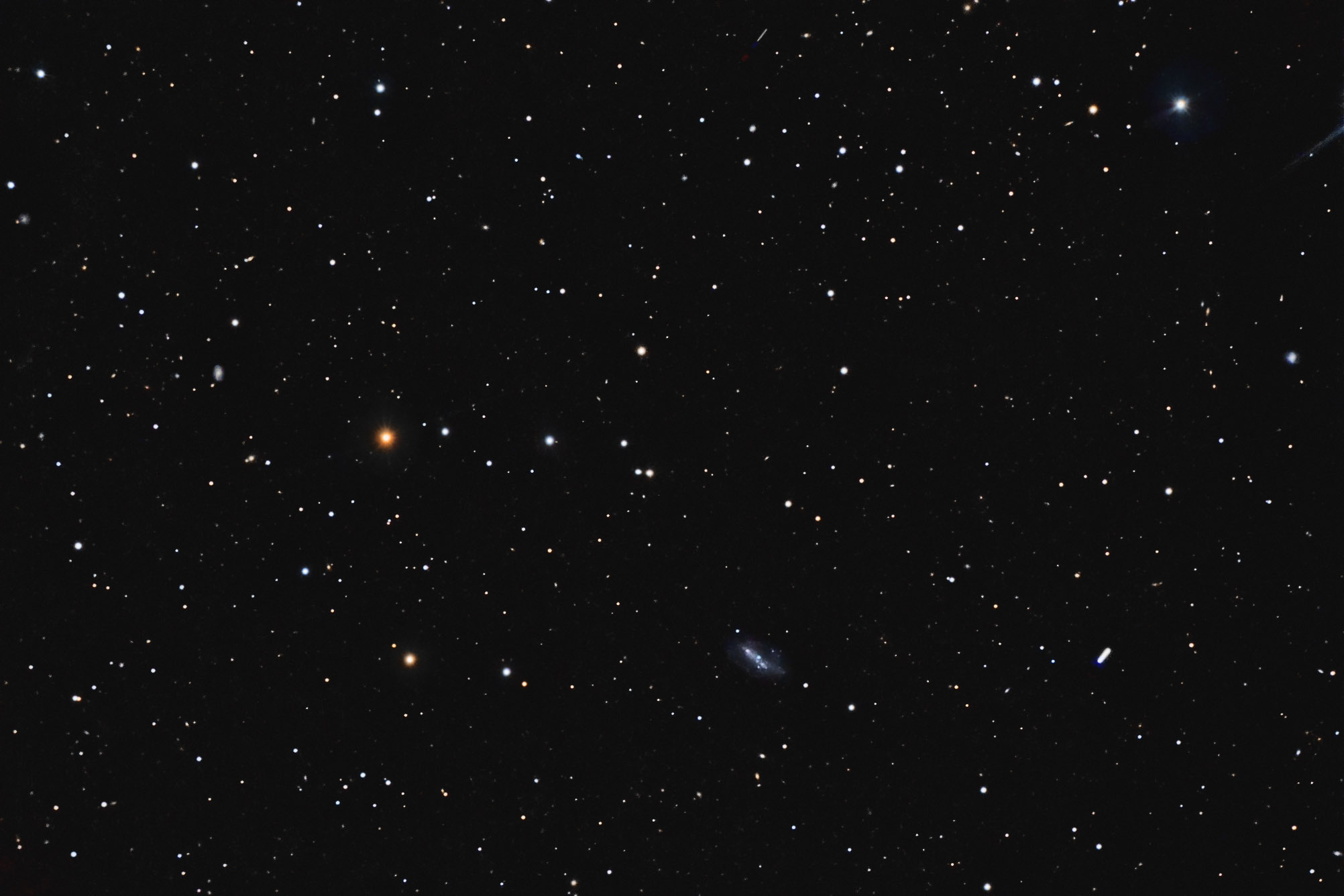 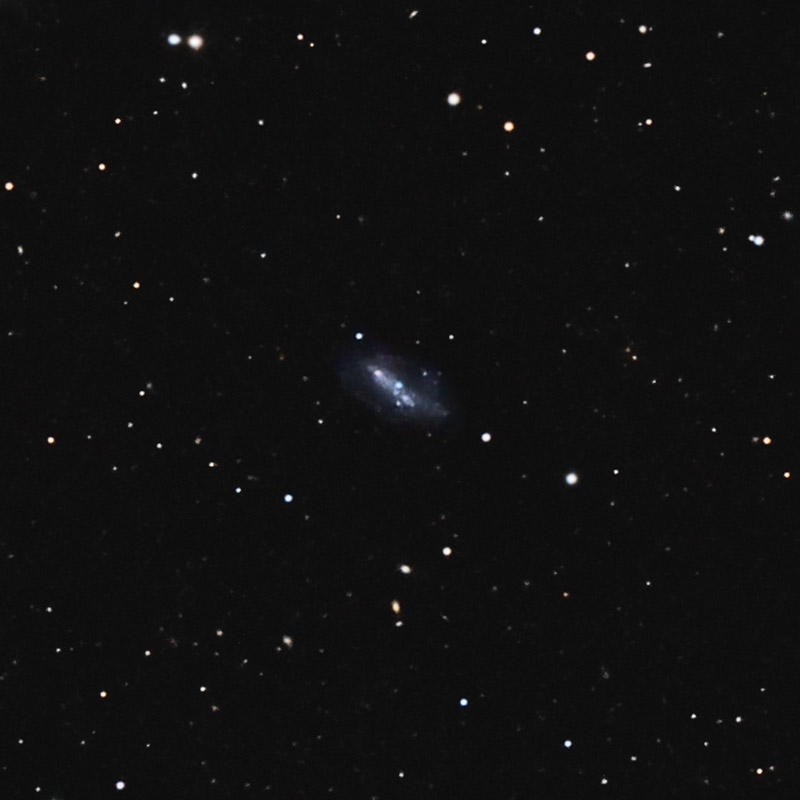