Arp 274/NGC 5679 consists of three galaxies in the constellation of Virgo. Arp put them in his category of \"double galaxies with connected arms.\" His note reads: \"Perturbation of arm by small galaxy to east.\" He is drawing several conclusions here that may not be correct. The first is the connected arms classification. NED has this to say about the two main spirals: \"Delta V > 1000 km/sec; probably an optical pair.\" That is they consider the two galaxies redshifts to be too different for them to be anything more than an optical pair. I\'m not sure that alone is sufficient but I also see no evidence of interaction between these two. Putting the two together I have to agree they are most likely an optical pair. Note too, in the annotated image there are several galaxies with redshifts that match the center galaxy and several that match the western member. It appears we really do have two different galaxy families in the image, the largest of each family nearly along the same line of sight as seen from earth.

That brings up Arp\'s note. It is true the eastern end of the middle galaxy\'s eastward arm has a sudden kink. This apparently was sufficient for Arp\'s conclusion that this is due to perturbation by the small galaxy off the arm. But this is the only evidence for this conclusion. In all other M51 type interactions in his Atlas, the entire arm is distorted not just the end. It\'s hard to explain just a sudden change like this as caused by an outside gravitational field. The effect should gradually begin. Maybe as seen in the third dimension it does. But how you tell this from a 2D image I don\'t know without further redshift data on that arm. The other problem is that there is no distance determination available for the small third galaxy. It too could be unrelated. It may be related, but, to me, it is far from being a solid conclusion. The odd fringes of stars off the small one may help this argument some. However, I\'d expect them to show some orientation toward the main galaxy rather than at right angles if this were the case. Again, a 3D view might show this is the case. I need far more evidence before accepting this, however. NGC 5679 was discovered by William Herschel on February 12, 1793, but isn\'t in either of the Herschel 400 observing programs.

The low surface brightness galaxy to the southeast of Arp 274 is UGC 09385. The UGC catalog lists it as a dwarf galaxy! It certainly has a low number of stars but with a diameter of about 50 million light-years, it is not very dwarf-like in size.

Of the galaxies to the southeast of Arp 274 at 330 million light years, the eastern one seems to have a comet sticking out of its southern end. NED lists it as a separate galaxy, SDSS J143557.41+051822.4. No redshift is given. Maybe it has a second arm hidden behind the foreground galaxy giving this illusion.

There are several galaxies at 800 million light-years scattered across the image indicating yet another family. This field also contains more quasars than average. One, in the lower right corner, is listed both as a galaxy and quasar at 1.9 billion light-years. Its spiral arms are clearly visible in my image. I\'d think a quasar would be so bright as to drown out the galaxy at my resolution. It must be a very weak quasar. 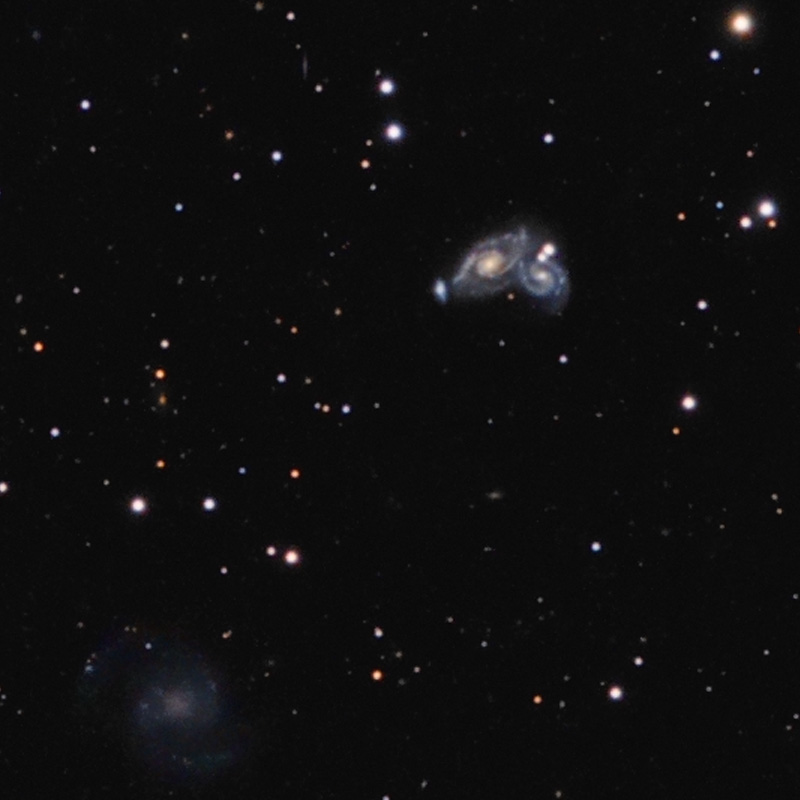 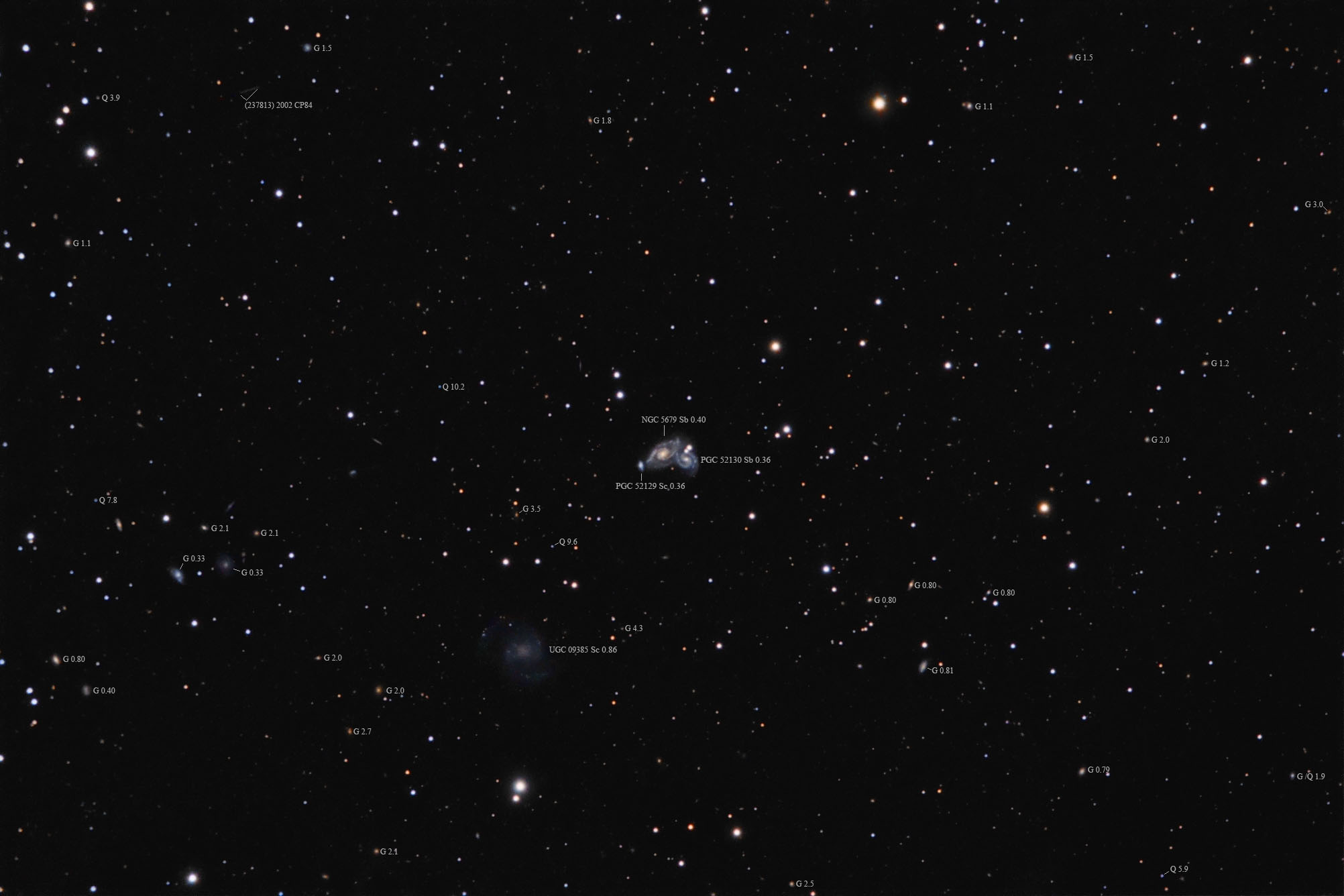 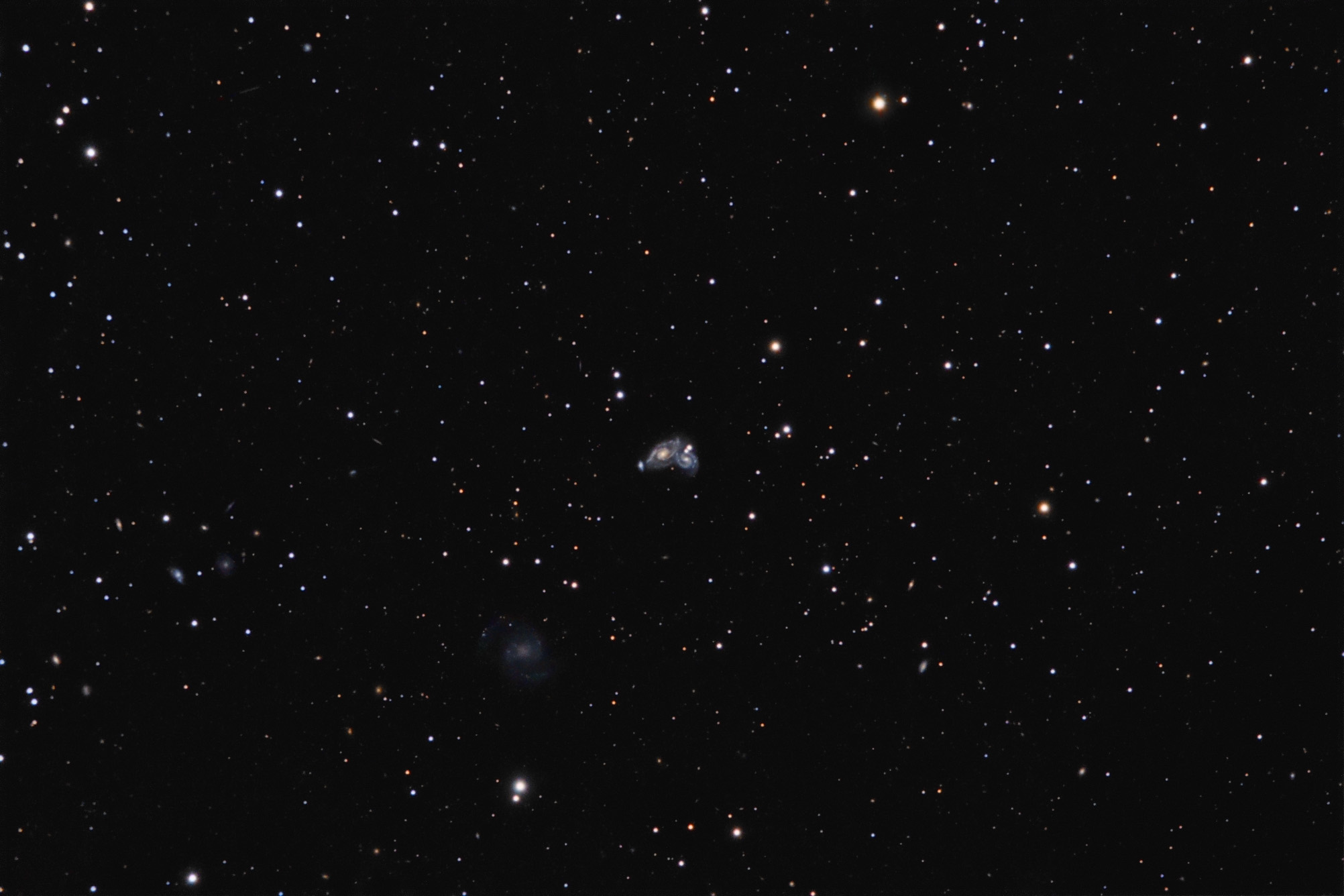