Arp 277 is in Arp\'s category for interacting galaxies. While there are many dozen interacting galaxies in his catalog he has only 6 entries for this category, all NGC galaxies. This pair is NGC 4809 (top) and NGC 4810 (bottom). Both are classed as Im pec and are found in Virgo. Neither shows any organized structure that I can see. Redshift indicates a distance of a bit under 60 light-years while Tully and Tully-Fisher measurements put them a bit over 70 million light-years distant. The redshift distance would make them likely members of the famous Virgo galaxy cluster. The pair was discovered by R. J. Mitchel on April 18, 1855.

At the top of the image is NGC 4799. I moved Arp 277 low and right to get it into the image. It too shows hints of distortion. There seems a hint of a tail going due west from the galaxy. My exposure is too short to show it as more than a hint. The SDSS image seems to show it as well but there\'s a problem. The galaxy is on two different SDSS images processed slightly differently. The result is the southern frame seems to show the plume while it is not very distinct in the upper frame. So is it just noise or real? I\'d hoped this would have been enough exposure to answer this but it wasn\'t. Still, I think there\'s some reality to it. I\'ll need to try again. NGC 7499 has a redshift distance of about 140 million light-years and is classed simply as S or S? and is listed as a Seyfert galaxy. If the redshift is correct it is apparently well beyond the Virgo cluster. Seyfert status gives some validity to it having had an interaction and thus makes the faint hint of a plume possible. It was discovered by William Herschel on April 30, 1786. It isn\'t in either Herschel 400 observing program.

I\'ve made an annotated version of the image. Toward the right side, I\'ve noted the position of a galaxy cluster with 12 members (NSCS J125416+024611). It has about the same position as listed for the galaxy SDSS J125416.01+024600.0 also shown on the image. The cluster likely lies beyond the galaxy. The position for the galaxy doesn\'t quite match that of a very large, low surface brightness galaxy. But there is no galaxy shown at NED where the galaxy is located. Nor is there any distance listed. So I show 2 question marks for it, one for the location error and another for no distance. (Edit: I\'ve since determined the galaxy is indeed that very dim tiny near starlike object. The large low surface brightness galaxy is SDSS J125415.87+024545.1) It\'s listed magnitude of 18.9 is fainter than I\'d estimate the galaxy but brighter than anything in the area other than the galaxy. There is a tiny galaxy at the exact position shown. It is far fainter than magnitude 18.9 however. This all seems to be an error in the SDSS or in NED\'s representation of it. My line goes to that faint galaxy. You will likely need to enlarge the image to even see it as it is lost in the eastern edge of the big galaxy. It\'s likely a member of the galaxy group and thus 2.8 billion light-years distant. That leaves the identity of the large blue galaxy unknown. I\'d put its coordinates at J125415.88 +024545.0 (about 3\" west and 13 south of NED\'s position).

This area seems full of confusion. Also in the immediate area is SDSS J125414.47+024616.7. SDSS lists it as a quasar. But it certainly is fuzzy, not starlike, in my image. A check of the SDSS image also shows it as fuzzy though the core is very compact and bright like a star. It\'s also in the Veron-Cetty+Veron 2006 edition of A Catalogue of Quasars and Active Nuclei as a Seyfert 1 galaxy. Maybe it is both. I\'ve listed it as Q/G. It is rather close for a quasar at only 2.9 billion light-years. It may be a quasar in a galaxy in the galaxy cluster listed at 2.8 billion light-years. 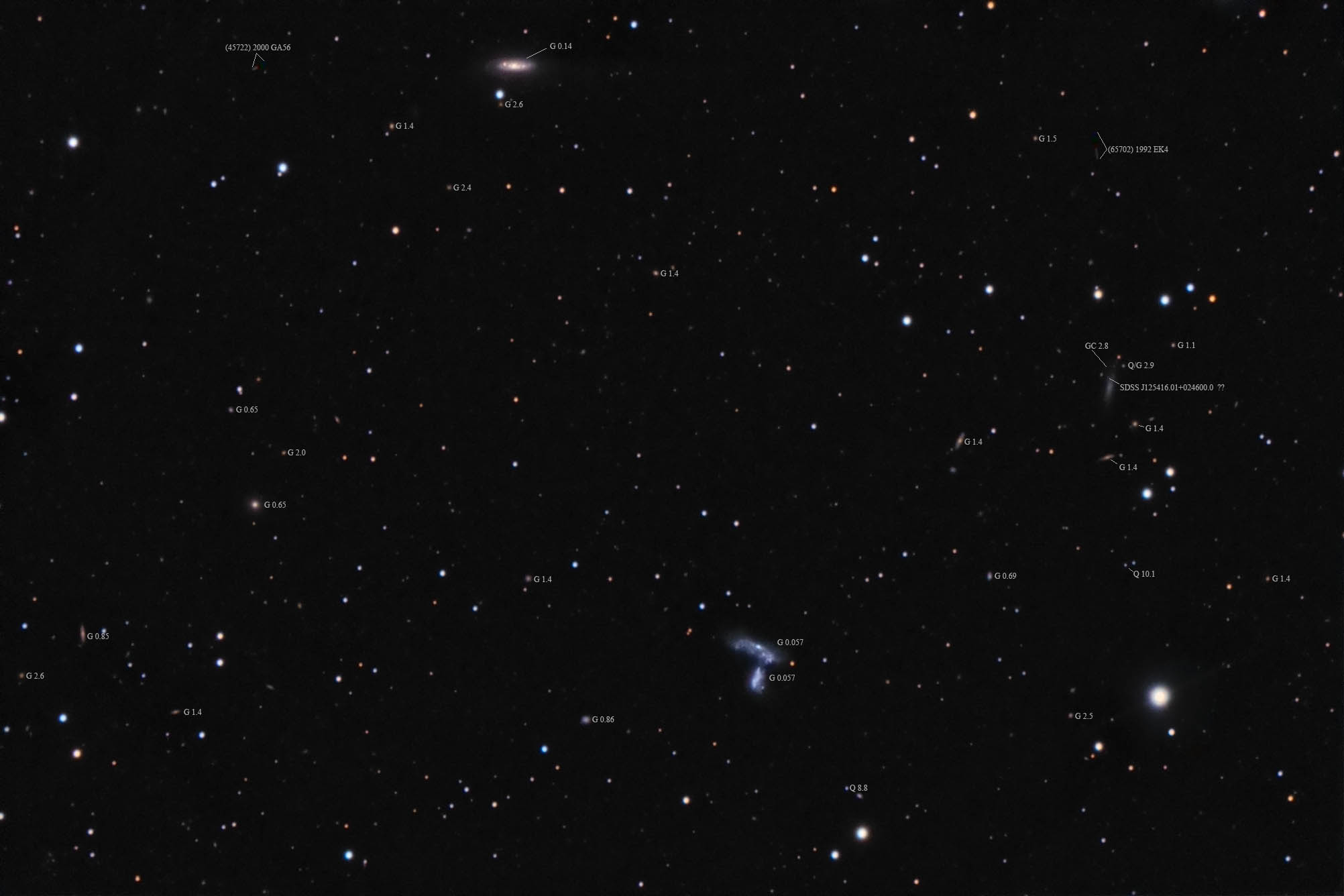 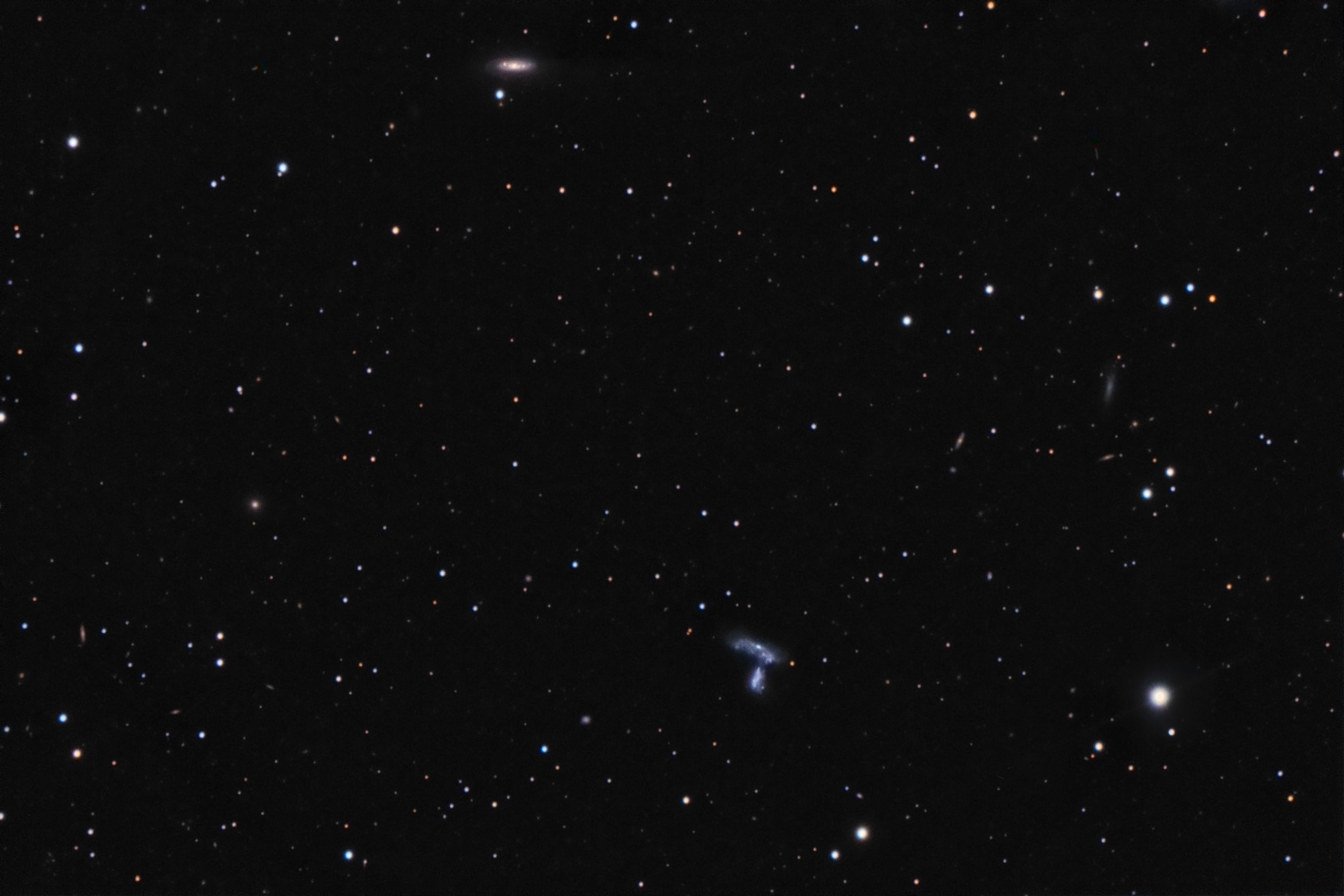 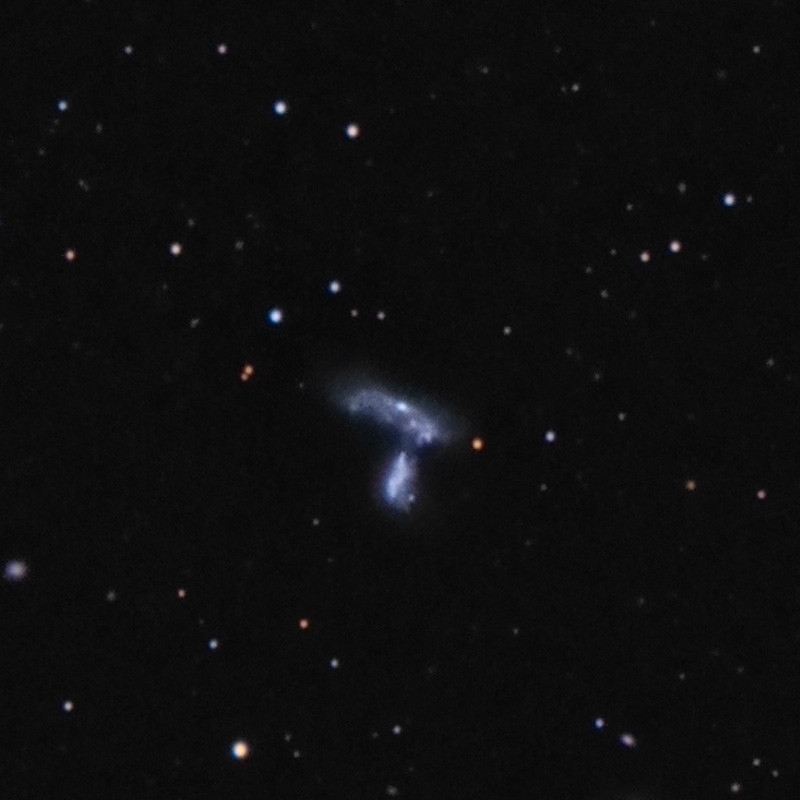