Arp 297 falls under Arp\'s category of galaxy groups, long filaments. It is located in Bootes. Its distance is a problem I\'ll get to. It is made up of several NGC galaxies, NGC 5752, 53, 54 and 55. When I looked at Arp\'s image of it I was puzzled by his comment: \"Companion on arm has long tail extending westwards.\" The companion I assumed to be the galaxy seen atop the spiral in his image (to the left in mine) While an arm of the spiral went behind the \"companion\" I couldn\'t see that as being called a filament and it certainly didn\'t go west (up in Arp\'s photo). Then I started to image it. First 10 minute frame came in and there was a nasty reflection off to the west of the spiral. I moved the scope as that would usually stop such reflections and tried again. But there it was and it didn\'t move in relation to the stars. So it must be real. I looked at the GIF version of the POSS plates and saw a hint of something. I enhanced these and yes it was there though my \"reflection\" was much larger. I downloaded the Sloan image which showed it clearly and now I could see the real long filament Arp was talking about. I can\'t see but a faint hint of it in the scanned version of his photo but sure could in my frames and the SDSS image. I moved it back where it was for the first image and took 7 more. I didn\'t use the moved frame as it would result in the image being rather cropped by several minutes.

As I processed this image a year later I noticed something odd. The filament goes west-northwest then fades before appearing again going due west at A higher intensity. Not only that there appears to be a faint hint of it going further east than where it meets up with the west-northwest part. Also, the color is different. This bothered me (still does). Then I started to gather redshift data and things got really strange. The spiral, NGC 5754, has a redshift of 215 million light-years. The companion\'s redshift puts it at 214 million light-years. So far so good. Now note the odd large blob on the arm north and a bit east of the core of NGC 5754. That carries its own catalog entry which NED labels as PoG meaning it\'s part of the galaxy. But its redshift is more than twice as great putting it at 439 million light-years. Oops, that doesn\'t compute. Note it isn\'t blue as the rest of the arm is but more white. The blue arm fades out before reaching it in fact. Look back at the white part of the west pointing long filament that\'s the same color. It points right to the blob! I have no idea if this means anything or not but it sure is interesting! I find no entry for the filament so can\'t provide a redshift.

Now consider the other two galaxies of the \"group\". NGC 5755 is the highly distorted spiral and its redshift puts it 443 million light-years away. About the same as the blob. The fourth galaxy is NGC 5753 to the northwest of 5755. It\'s has a similar redshift that puts it at 442 million light-years. These are virtually the same as the blob supposedly part of NGC 5754 yet at the distance of 5753 and 5755. Yet I find no papers that see any issue here. Not even a mention of the redshift differences. To me, it is a really interesting puzzle.

At the top, a bit right of center, there\'s a galaxy cluster marked by one enormous galaxy if NED\'s data is right. The cluster is MaxBCG J221.37379+38.60317 and contains 15 galaxies in an unknown area that has a photographically determined distance of 1.9 billion light years. The core galaxy SDSS J144529.70+383611.4/2MASX J14452968+3836117 has a redshift distance of 2.0 billion light-years. This is where I have a big problem. If that\'s correct that is one tremendous galaxy. By my measurement, the galaxy is a bit over 53\" of arc across which at that distance is over a half million light-years. I had never considered a galaxy of that size possible. NED shows it at magnitude 16.8 so there\'s no chance of a misidentification though they show it as only 25 seconds of arc across. Still twice the size of our galaxy but not impossible. I can\'t see how they got that measurement, however. My image scale is 1.01\" per pixel so you can make your own measurement. I have to believe something is wrong here, I just don\'t know what it is.

This is a reprocess of my old data which shows a bit more detail than the original processing did. Also, I\'m running these images south up rather than my normal north at the top. Just seemed more pleasing this way. 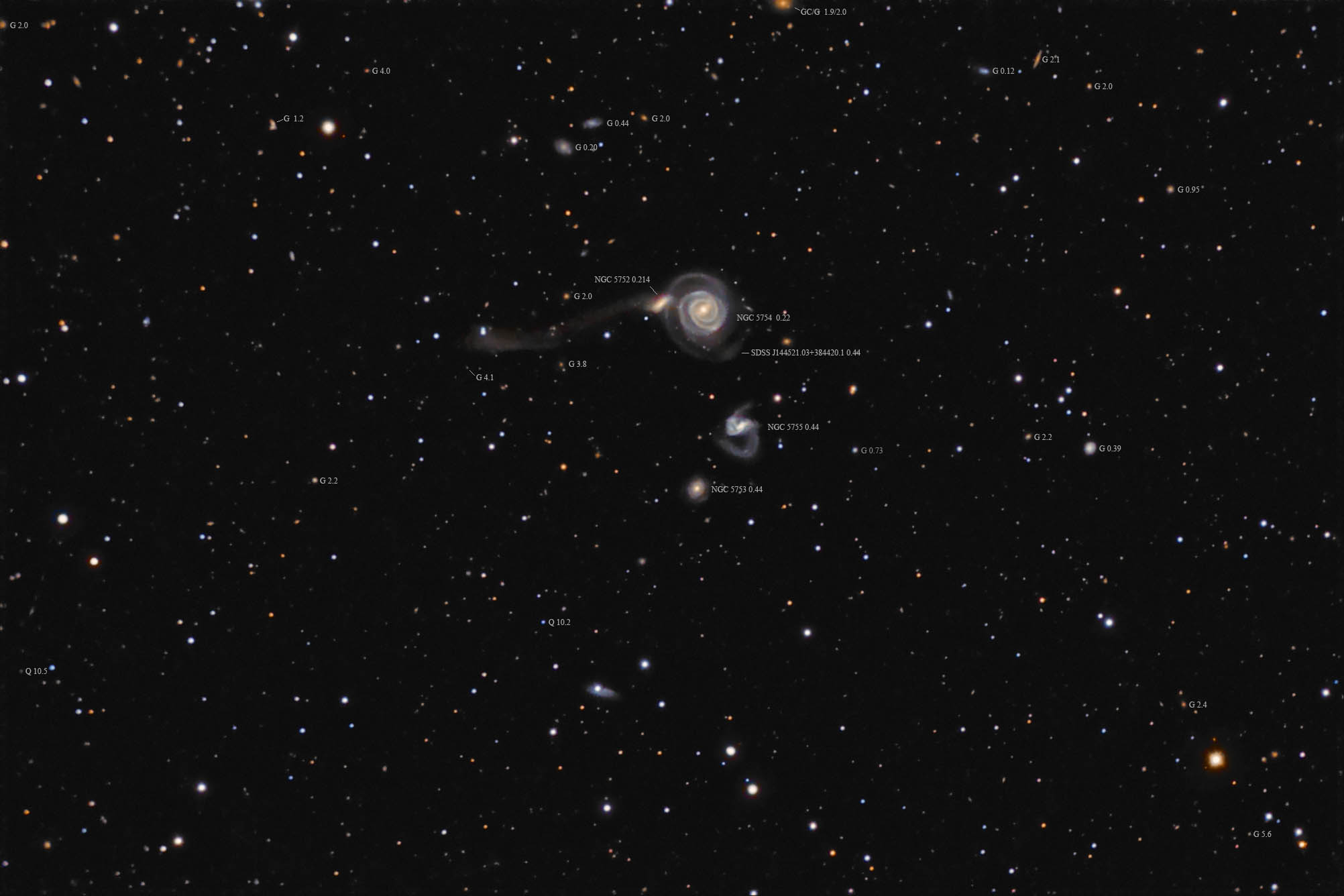 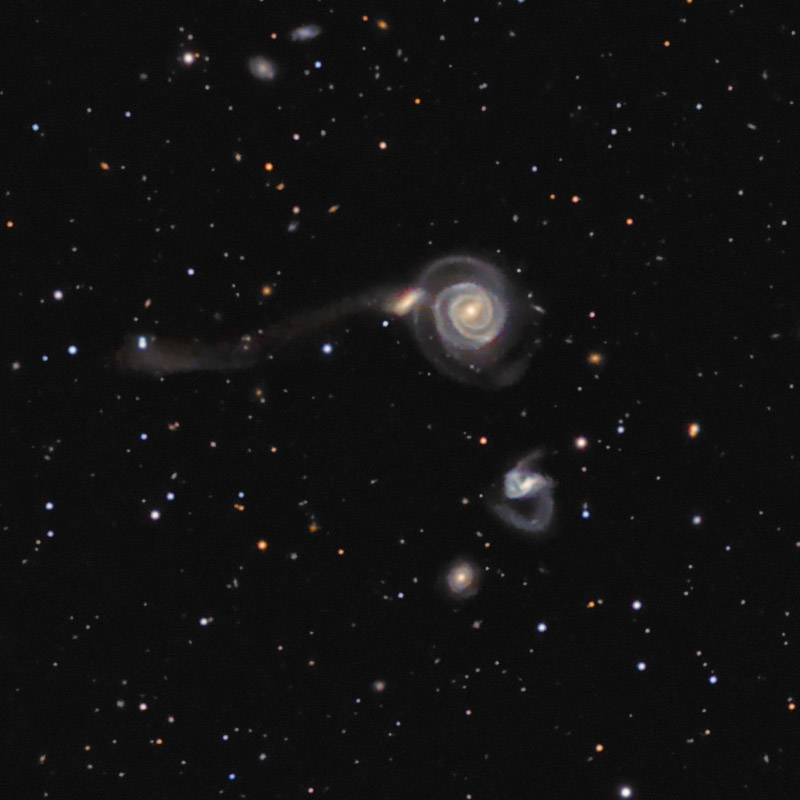 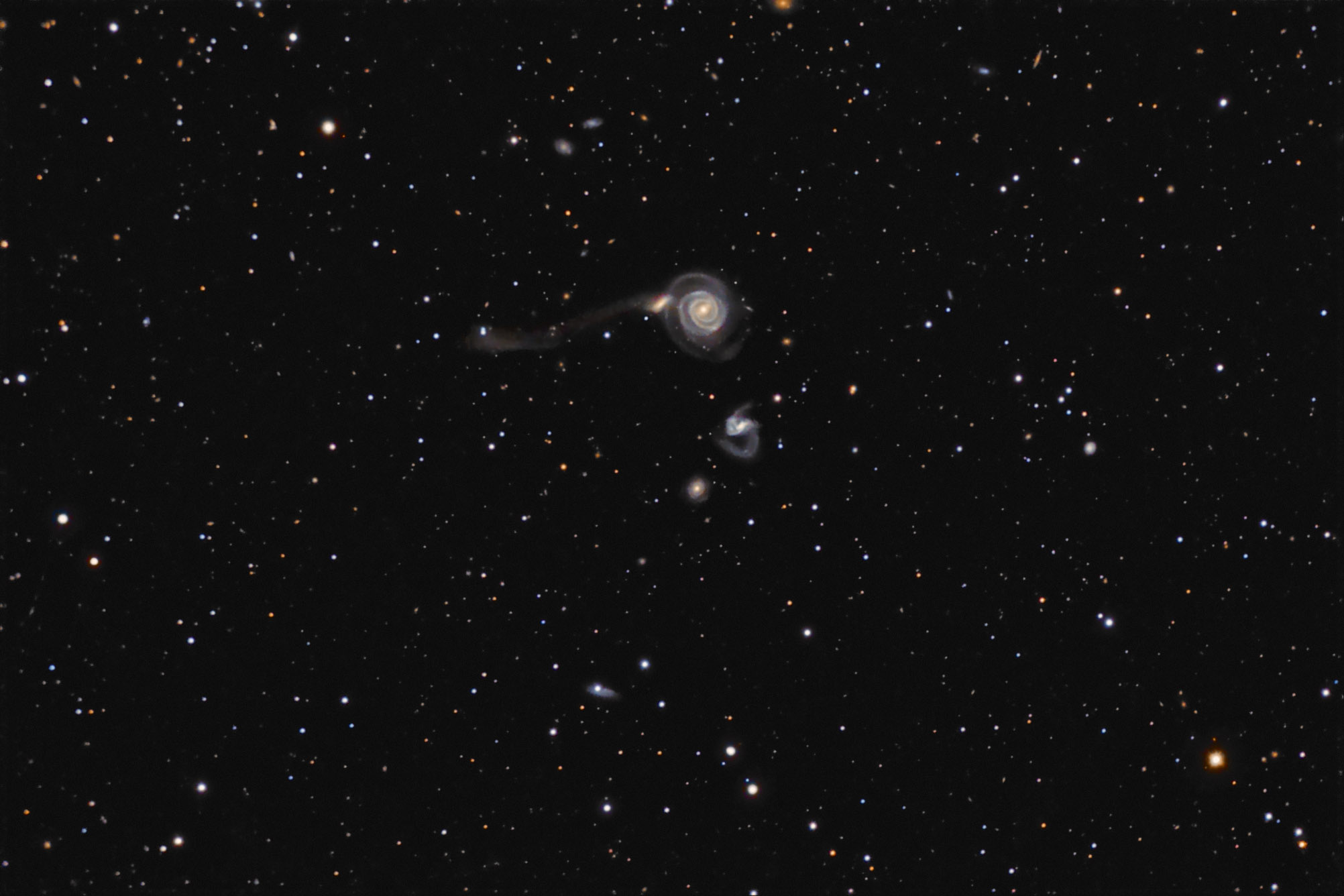