Arp 298 is a pair of interacting galaxies about 200 million light-years distant in the constellation of Pegasus just northwest of the circlet of Pisces. The northern galaxy is IC 5283. It shows a nice tidal plume off to the west-northwest. Unfortunately, due to a major blunder by an imager who will remain nameless this image was taken like they do it in the movies -- with the lights on in the observatory. I don\'t mean the red 10 watt ones but three 60 watt white bulbs! This increased my noise level greatly and cut my limiting magnitude from the common 22.5 to 23 by about 1.5 magnitudes. Actually, I thought this image lost when I realized what I\'d done but it\'s amazing what GradientXTermanator can do!

My image also seems to show a faint plume to the north from IC 5283 coming off the eastern end. Unfortunately, it may be just noise due to the lights being left on. Though I do see hints of it in the Hubble image when seen at lowest resolution. IC 5283 is classed as SA(r)cd pec? by most sources I checked. A few say it may be a Seyfert 1 galaxy. It certainly is a mixed-up galaxy. If it has a core it is shifted, \"sloshed?\", to the eastern end and highly distorted by its encounter with its companion. So I found it rather surprising when one source claimed they are not interacting galaxies. I stopped reading at that point. Probably shouldn\'t have. Maybe it was a misprint.

There is definitely a spray of stars between IC 5283 and its larger companion NGC 7469. NGC 7469 is classed as (R\')SAB(rs)a. While I found few papers on IC 5283, everyone and their uncle have apparently written something on NGC 7469. A search turned up an endless stream of references! It seems it is a prototypical Seyfert 1 galaxy so has been studied every which way -- though the field is out of the Sloan survey area so they haven\'t covered it. Its core is surrounded by a ring of massive star formation that appears rather continuous in my image except for a few brighter areas. That\'s an illusion due to low resolution. Hubble shows it to be made up of dozens of bright star forming regions. From this ring, there\'s an apparent outer ring. It is really two spiral arms that overlap making what appears to be a continuous ring. Even my lower resolution shows the ends of the arms. One paper said the star forming knots were more common on the northern side that faces IC 5283 and were a good indicator of the interaction between the two. I agree the interaction likely helped form these regions but to say that is why more are on that side just doesn\'t fly to my way of thinking. Galaxies rotate. Even a \"new\" region like these have likely made one or more trips around the galaxy in this time. This would make it mostly coincidence that we happened to catch things where more were on that side of the galaxy. Differential rotation would quickly destroy any organized pattern. It\'s likely these have been interacting at least a half billion years to create the plume and spray of stars we do see, plenty of time for star forming regions of NGC 7469 to be randomized. The inner ring certainly shows a rather even distribution of star forming regions.

Arp classed this pair under double galaxies with the comment: \"Absorption, knot. Note apparent re-entrant spiral arm on southern galaxy.\" I\'m not sure what he sees as the \"re-entrant spiral arm.\" The more I look at Arp\'s photo as well as the Hubble image I am wondering if IC 5283, the northern one, might not be two interacting spirals itself. I didn\'t find any hint of this possibility in the literature, however. NGC 7469 was discovered by William Herschel on November 12, 1784 but is in neither H400 observing program. IC 5283 was found by Guillaume Bigourdan on September 4, 1891.

There are two asteroids in my image or should be according to the minor planet center. The brighter is (105526) 2000 RQ26 at magnitude 18.0. It is easily seen as a short slightly downward slanting streak NE of the bright star that\'s NE of Arp 298. The other is listed at magnitude 19.5 and should be visible but I show nothing in that location. It could be it was lost in the gradient from the observatory lights. The data for its orbit is a bit skimpy based only on a 34 day arc. Also, it was discovered in 2004 yet hasn\'t made one orbital rotation since discovery so may be far fainter than the predicted magnitude. I usually can go at least a magnitude fainter than this in the FITS image so this is a bit of a mystery. It is 2004 JR45 for those wanting to try and find it.

In preparing the annotated image I came across CXOMP J230252.1+085520 an X-ray object discovered by the Chandra X-Ray Observatory Multiwavelength Project. It is classed by NED as a Seyfert 1 galaxy. The kicker is that they put its distance at just over 12 billion light years at magnitude 21.3. Quasar maybe, a galaxy that size that early in our universe\'s existence? That\'s one heck of a Seyfert AGN! I have trouble swallowing that. But it isn\'t the only one like this in the image. At magnitude 21.2 is another Seyfert 1 galaxy found by Chandra that is listed at 9.1 billion light years, CXOMP J230252.2+084810. Note these are the magnitude in red light rather than green I normally use. My CCD is rather insensitive in red light. There are several others including some found by ROSAT. All are marked as Seyfert 1 galaxies with redshifts that seem far beyond anything I should be able to image if they are galaxies rather than quasars. All are marked on the annotated image with G? to denote my uncertainty. To complicate things further one ROSAT object, not pinned down by Chandra, has rather vague coordinates with a large error bar for its position. In that case, I\'ve put a question mark after the distance to indicate this is my best guess as to the object based on magnitude and location in relation to the error circle.

While the field hasn\'t been covered by Sloan a surprising number of objects did have redshift data. NED lists 5 galaxy clusters in the image. One had a galaxy at the exact position listed. I\'ve shown that one on the annotated image with a GC label. I couldn\'t really see any sign of the others so haven\'t marked them.

I can\'t explain the lack of identified objects on the eastern half of the image. Might be I hit the very edge of the surveys. Other than that I\'m out of ideas. 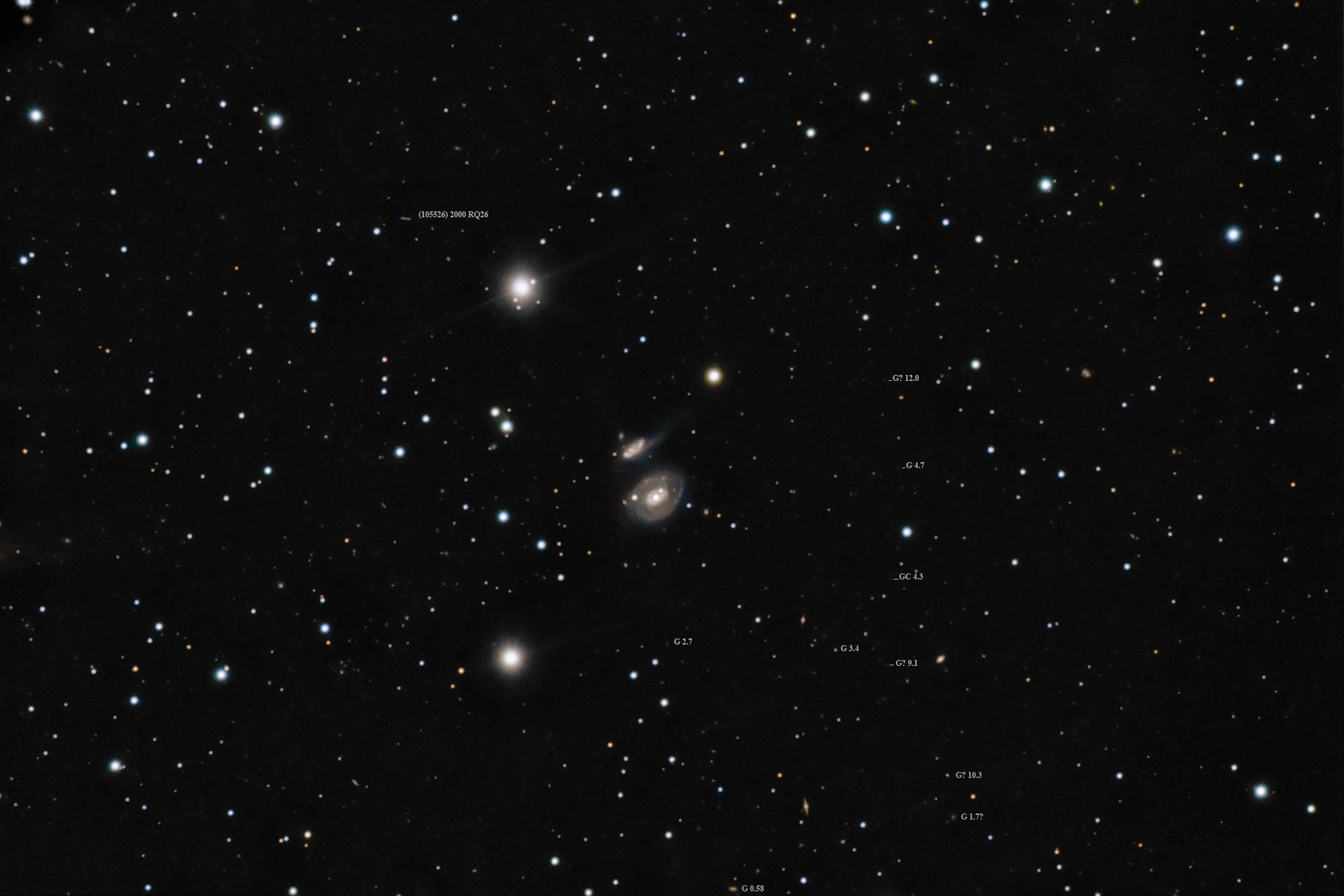 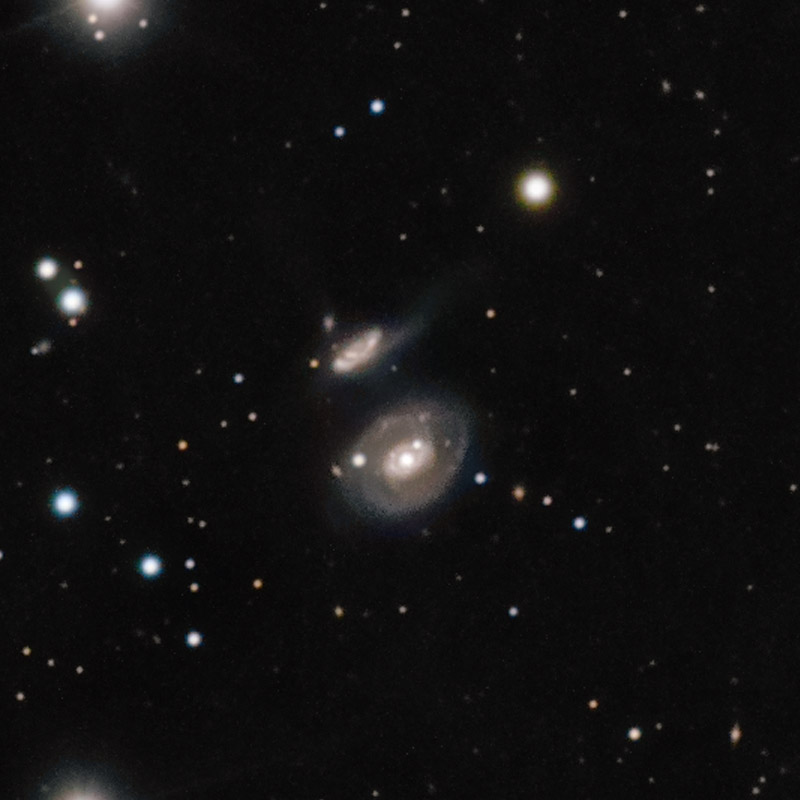 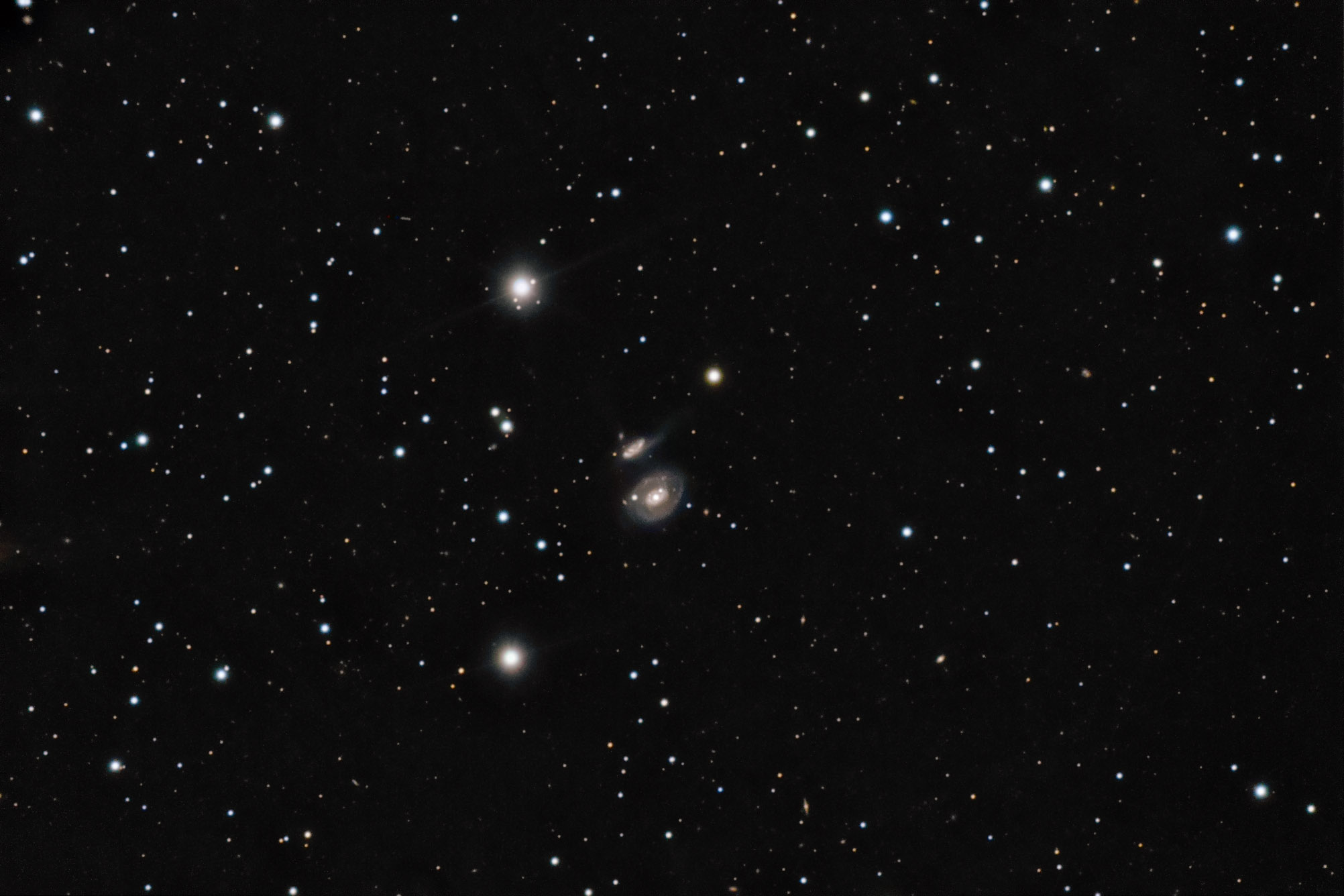