Two smashups -- 5 galaxies -- What a mess that makes. While several pairs of Arp Atlas entries are close to each other in angular measurement these two are the closest. Though they are far apart in reality.

To me, this is a case of string cheese and a massive train wreck all in one image. Arp created a lot of confusion on this pair of entries when in some places he reversed them. There\'s also confusion on which galaxy is IC 694. More on that later.

Arp 296 is the string cheese part of the entry. It is a pair of galaxies apparently nearly connected by a long filament that appears to be drawn out from the lower galaxy. There\'s a counter filament going the other direction as well that is much shorter. The lower galaxy is SDSS J112850.64+583336.7, two minutes north is PGC 035345. NED classes the lower as S: pec and the northern as SB(r)ab and notes a lot of HII emission not seen in my image. Both are about 800 million light-years away. Are they really an interacting pair? Odd how one has severe tidal tails while the other is rather normal looking though its eastern arm suddenly becomes very faint and somewhat drawn out. Though I\'d think we\'d see more distortion than this from an interaction. Or is the arm weak because its stars contribute to the plume apparently coming from the lower galaxy? I didn\'t find any help in the literature. My search wasn\'t all that great however so if someone out there knows of some help here let us know. Arp\'s comment on the pair reads: \"Long straight filament almost to attachment with arm of spiral.\" By spiral, I assume he means PGC 035345 as NED shows both as spirals.

Much nearer at only about 150 million light years, Arp 299 is a quite spectacular train wreck in progress. I didn\'t realize all the outlying plumes around it or I\'d have used a lot more time on this image. Maybe later this year I\'ll get a chance to try and add time to it. I did take a lot more data but half of it was so poor I threw it out. The double data was an accident, I didn\'t realize the two Arp\'s were in the same field and imaged it twice, once on a very poor night. But you can barely see a north going plume that is rather narrow and eventually curves a bit left. Another, fainter one is seen to its west Below there\'s a bright wide and short plume due south with a far fainter and far larger plume to the southwest.

The identity of the two galaxies is very confused. Some sources say NGC 3690 is the western galaxy with IC 694 being the eastern member. In fact, most of the literature I saw says this but newer literature identifies IC 694 as the small galaxy to the northwest but still in the plume of the colliding pair. I\'m going with this interpretation and have so marked the annotated image. For more on this see http://iopscience.iop.org/1538-3881/118/1/162/pdf/990040.web.pdf (PDF pages 22-23, Journal pages 183-184). Note that their discussion of the plumes matches my image as to the northern plumes (fainter one west of the main one is also visible in my image) but I see a much larger plume to the southwest than they show. More data will likely settle the issue.

Is IC 694 involved with Arp 299? Arp seems to have included it. NED does class it as a starburst galaxy with an active galactic nucleus, no other classification given. Its redshift distance is nearly 190 million light years. If right that puts it about 40 million light years beyond the train wreck. While it is remotely possible this difference is entirely due to a relative motion I find that a bit difficult to accept. It may have passed nearby a billion years ago at a distance great enough to not distort it but close enough to trigger the starburst and feed its black hole. A process that could be continuing today. But I doubt it had anything to do with the train wreck that is Arp 299.

Of the colliding pair, the western one is classed as SBm? pec by NED with the eastern one classed as IBm pec. How they detect a bar in either is beyond me. They both appear to be a bunch of bright star regions scattered about with what is left of the cores well off center.

The confusion continues with a pair of galaxies in the south-east corner of the image. I note in the annotated image the southern one (rather blue) as being 0.59 billion light years distant. NED is very confusing about this pair. In the position of the northern galaxy, they show 2MASX J11300711+5826154 with no distance. The blue galaxy is 13\" of arc south-southeast of this galaxy. At about the position of the southern galaxy NED shows two galaxies as VII Zw 405 NOTES01 and VII Zw 405 NOTES02 with a separation of 3\". While my seeing wasn\'t all that good I thought I should be able to see that lower blue one as a close double. Looking at the notes at NED several different sources say VII Zw 405 is a double galaxy with the northern one being red and the southern blue with a separation of -- 13\" of arc. Their own notes would seem to say the southern blue object is just one galaxy. The position NED gives for VII Zw 405 matches the blue galaxy\'s position. Only the southern member has a redshift measurement. So who is right here I have no idea.

Low center there\'s a nice tight group of galaxies with the same red shift distance of 0.56 - 0.57 billion light years that are blue. One apparent member is somewhat redder but has no redshift data. I marked it with a question mark.

Hubble image of Arp 299 (its a tad better than mine):
http://www.spacetelescope.org/static/archives/images/large/heic0810as.jpg 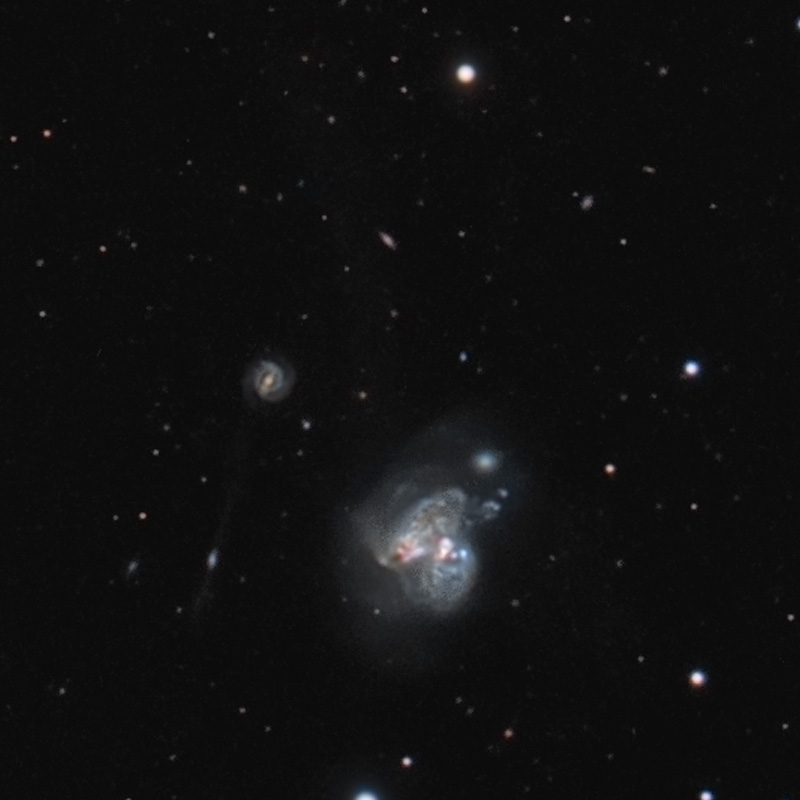 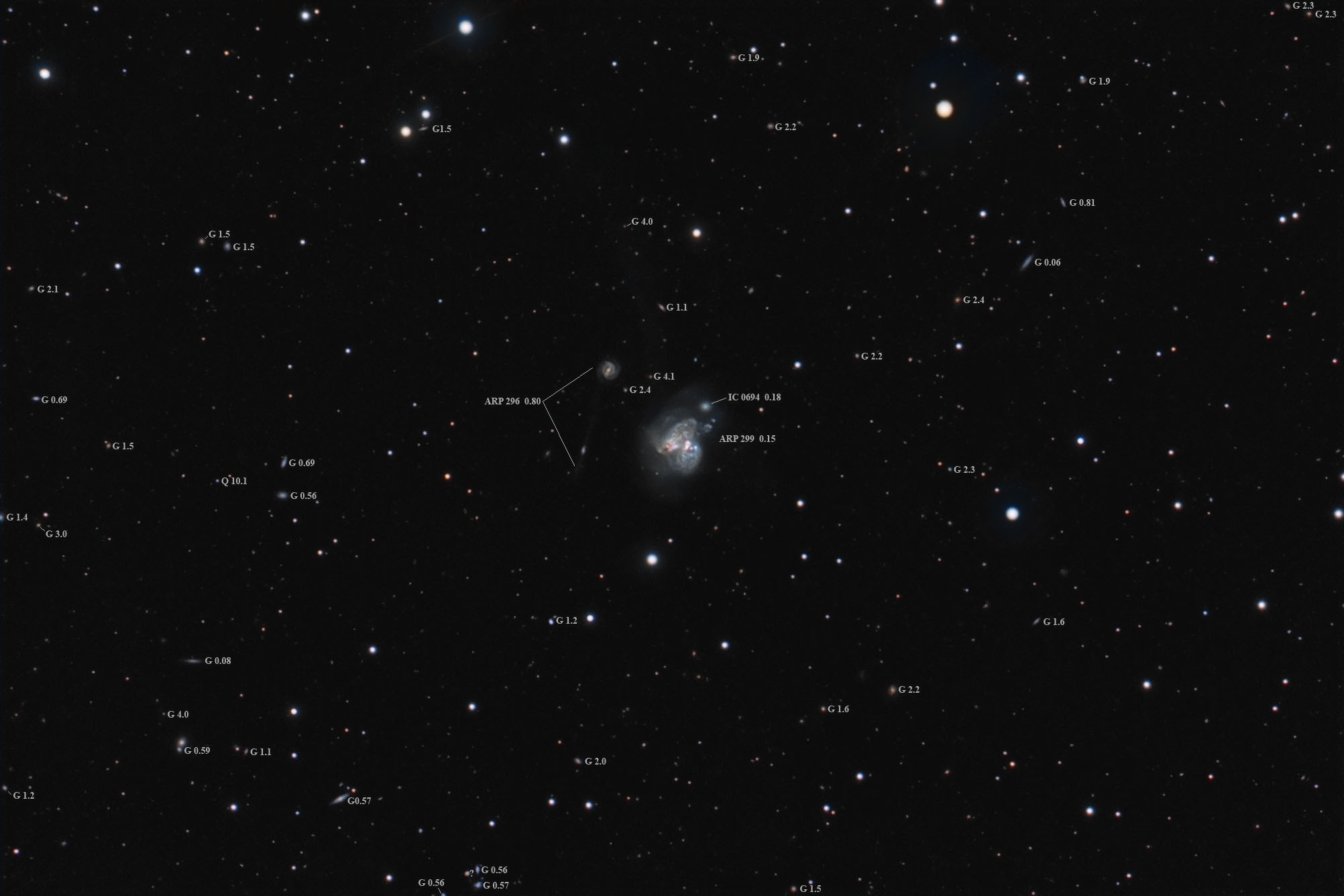 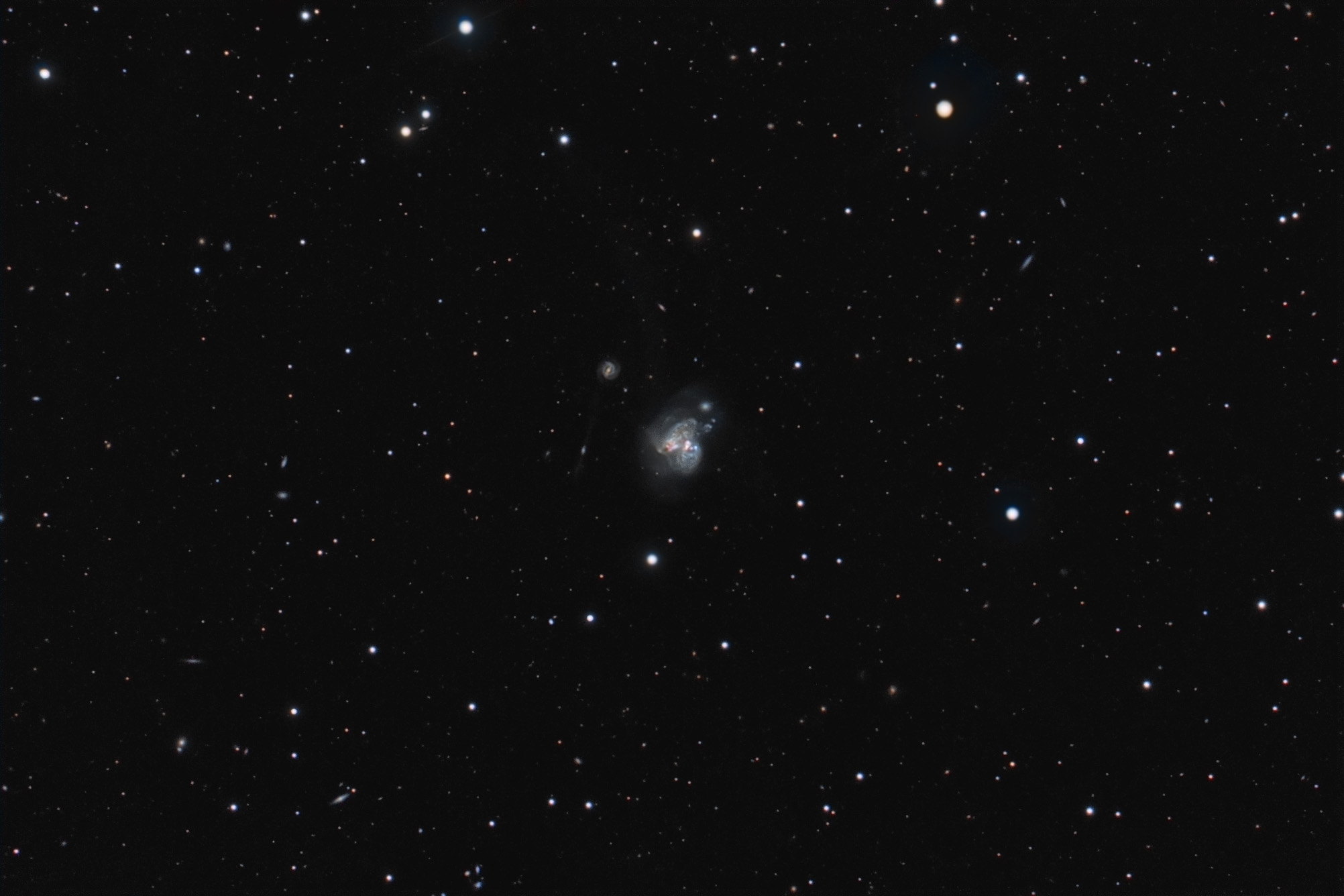