ARP 300 is in his class \"Group galaxies: Double galaxies. They are UGC 5028 and UGC 5029, right to left. But UGC 5028 is itself a double galaxy MRK 111 NOTES1 and MRK 111 Notes2 top to bottom. So we really have three. Or is it four? Note the thin needle \"galaxy\" to the lower left of UGC 5029. Oddly it isn\'t in the Sloan survey that I can find nor any other catalog yet quite obvious. Arp apparently mentions it in his notes when he says, \"Note elongated feature pointing toward nucleus of larger spiral.\" Apparently, he didn\'t consider it a galaxy nor does anyone else. Sure looks like one to me. It likely is far in the background but without data that\'s only a guess.

Note there is yet another double galaxy in the area. Below UGC 5028 is a pair of very orange galaxies; VII Zw 280 NOTES04 (top) and VII Zw 280 NOTES03 (bottom). I find no redshift data on them but they too appear far in the background. Arp included them in his photo.

So how far away are the galaxies in Arp 300? The simple answer is about 180 million light-years. But this varies some by whose redshift you believe. Galaxies in a group orbit around a common center of gravity which gives them each a different redshift. When the group is small there\'s no good way of determining an average velocity. The dance they do can be very complicated to sort out. Individually, per NED the distances using 5 year WMAP data are: UGC 5029 181 million light-years, MRK 111 NOTES1 178 million light-years and MRK 111 NOTES2 185 million light-years. Note the cores of MRK 111 show quite different colors in my image. At first, I suspected the bottom one to be a star in our galaxy not a galaxy core but the redshift data shows that was very wrong.

There\'s a galaxy cluster candidate, NSC J092952+683500, in the upper left corner of my image. I see a bunch of very orange galaxies in that area. None have redshift data, however. So I don\'t know if they are the cluster or it is something fainter. The cluster is said to be 4 billion light years distant so if it contains some giant ellipticals they might be at least some of the orange galaxies in that area in my image.

The featureless blob of a galaxy on the right edge of my image is UGC 04998, a nearby galaxy only about 30 million light-years from us. So it is far closer than any other galaxy in the image. It is an Im galaxy.

These galaxies are located in Ursa Major not far from M81 and M82. That likely explains the galactic cirrus that appeared in the image much to my surprise. Most of it is at near background level so appears as background noise but for the ribbon running vertically through the image. 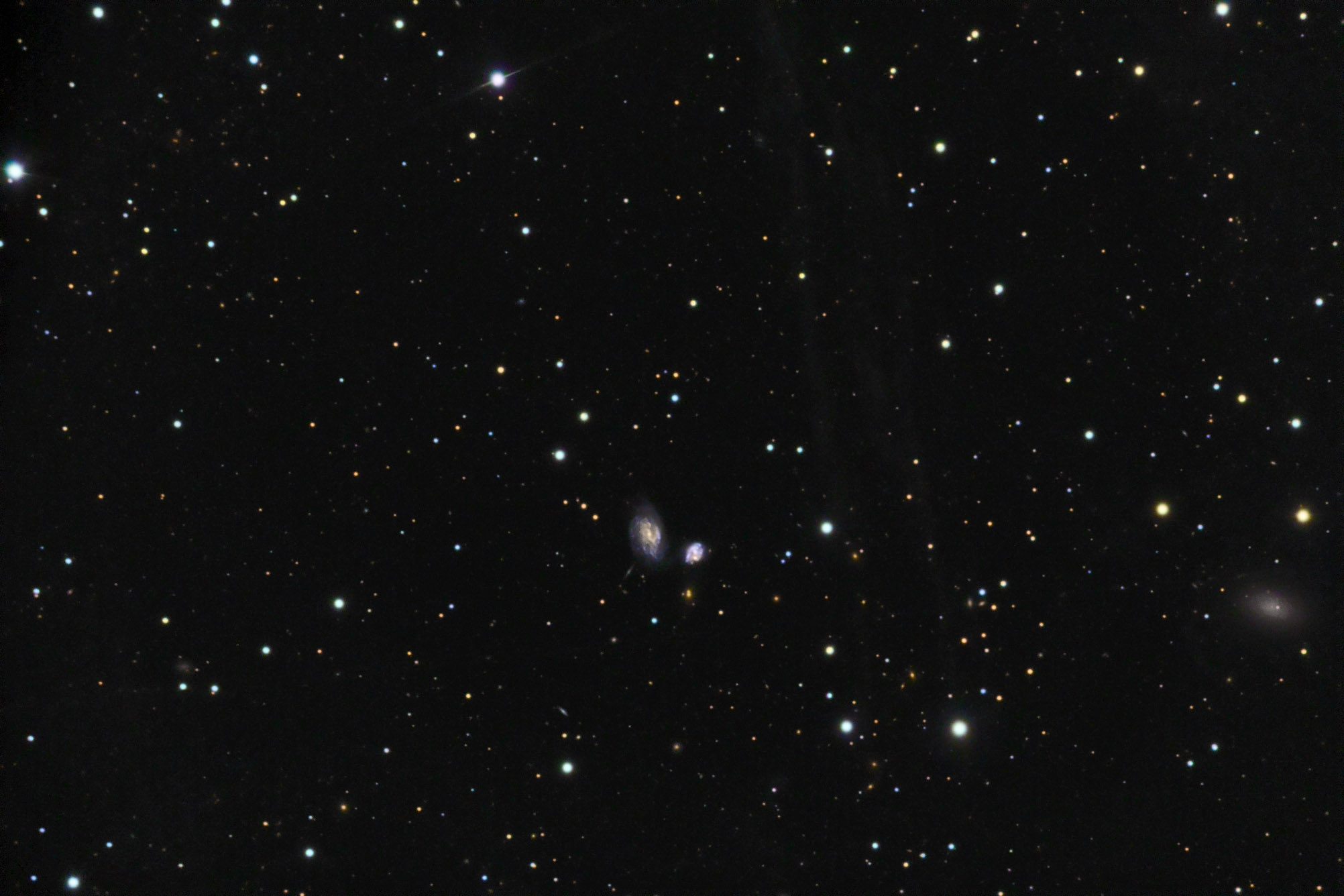