Arp 303 is classed by Arp under Group Character: Double galaxies. He apparently made no notes on this one. Thus, other than there being two galaxies at the same distance, one of which appears a bit distorted I don\'t see that it is all that unusual. Many exist that to me are far more unusual that aren\'t in the catalog.

The southern, somewhat distorted galaxy, is IC 563. NED classes it SB(r)ab: pec. It does show a large dark area north of the core and a tidal arm to the west. The northern galaxy is IC 564 classed by NED as SA(s)cd? pec. Its peculiarity seems mostly due to a large radio loop. The pair is located in northwestern Sextans and are about 290 million light-years distant. According to the SDSS, the small blue knot in IC 564 to the southwest, just beyond a redder knot is really another galaxy, SDSS J094619.84+030406.6. They give no redshift data. I doubt it could be seen through the disk of IC 564 so is most likely a foreground object or really what it appears, a star cloud in IC 564. I vote for the latter as there\'s yet another such \"galaxy\" in IC 564 per the SDSS. It is a more yellow star cloud directly east of the core that is very small and nearly star-like except for its elongation. Usually these are noted as PofG by the SDSS indicating they are part of the galaxy or NED puts in a note to this effect. Neither happened here but I still am going to vote for them being part of the galaxy, maybe pieces digested from IC 563 when they were closer.

There are two other galaxies in the image that are at the same distance as Arp 303. They are close together to the northwest. The further, bigger and brighter one is IC 561. It is unclassed by NED but looks like a typical disk galaxy except for the two \"holes\" to the southeast and southwest. The other is, of course, the smaller spiral like galaxy to its southeast. It is SDSS J094602.21+030803.5 and is also not classed by NED. Again the CGCG catalog considers these a pair and records them as CGCG 035-049. Both were discovered by Stephane Javelle on March 21, 1893.

The large, low surface brightness galaxy toward the southwest corner of the image is UGC 5224. At only 100 million light-years it isn\'t related to Arp 303 but makes a nice addition to the image. It is also cataloged as CGCG 035-048 which considers it a triple galaxy with the blue and red galaxies toward its southeastern end. I find no redshift data but suspect this is just a chance alignment and they really aren\'t a physical triplet. To the northeast of the triplet as a nice oval galaxy with a large orange core surrounded by a slate blue disk. This is SDSS J094600.84+030141.1. Again I have no redshift data on it. Beside it to the east is the smaller blue galaxy, SDSS J094602.46+030140.3, at 940 million light-years. Why there\'s data on the fainter one only I don\'t know. Though it is unusual to see a blue galaxy at this distance.

At the top of the image almost directly above Arp 303 is a very red small galaxy. It is SDSS J094618.88+031417.9 at 1.52 billion light-years. To its east is what appears to be a group of very distant galaxies. While I find each listed in the SDSS none carry any distance data nor do I see a galaxy cluster listed for the area. To the southeast of SDSS J094618.88+031417.9 is SDSS J094618.88+031417.9. It is listed as being 930 million light-years distant. Go directly east from this galaxy some distance and you come to two equally bright blue stars of 15th magnitude. Continue east to the first much fainter orange star. Go southeast to another slightly fainter orange star. Continuing an equal distance brings you to a blue star of about 20th magnitude. This is the most distant object in the image that I\'m aware of. It is the quasar SDSS J094649.38+031152.7 with a redshift of z=2.059650. This would put it about 10.5 billion light-years distant. The light was leaving it about the time our galaxy was born and 6 billion years before our sun was created.

Well left of center and a bit south are two 20th magnitude elliptical galaxies that seem in the core of a bunch of much smaller and fainter galaxies. Large galaxies often anchor galaxy clusters. Is that what\'s happening here? I see no cluster listed. They are SDSS J094702.91+030023.8 and SDSS J094704.71+030024.0. Redshift puts them about 3.6 billion light-years away. None of the smaller, fainter galaxies in the area have redshift data that I could find. 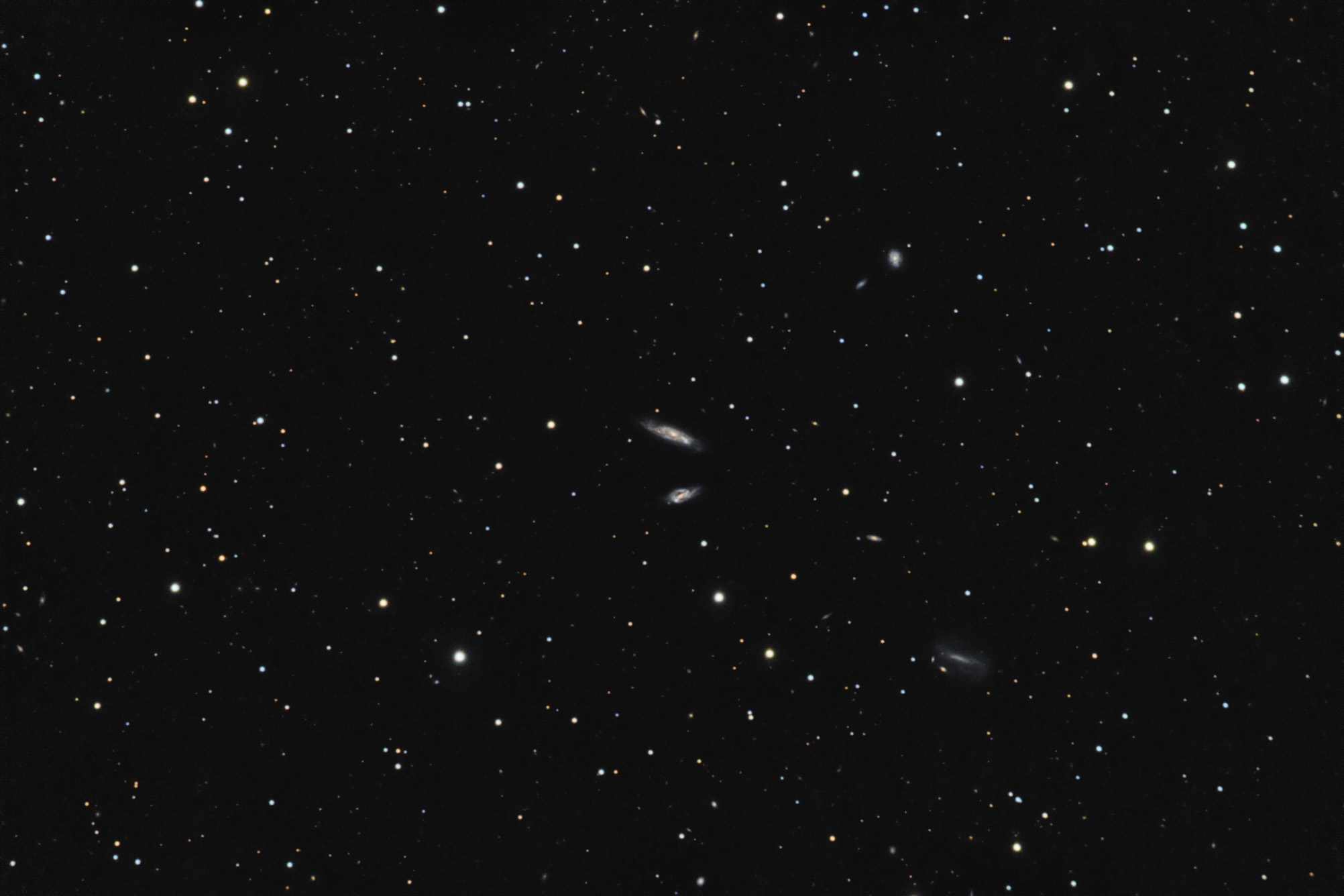