ARP 307 falls under his class: Group Character: Group of Galaxies. It is located in Leo with has more than its share of galaxy groups. Arp\'s comment: \"Possibly not interacting.\" It consists of three galaxies, NGC 2872, NGC 2873 and NGC 2874. Not exactly right to left. NGC 2872 is the big E2 elliptical. Redshift data puts it at about 160 million light years distant. NGC 2873 is also about 160 million light-years distant by redshift. NED doesn\'t give a Classification. The NGC Project says Sb which seems reasonable. It certainly is a red spiral, a new class of galaxy to come out of the Galaxy Zoo project. This leaves the big barred spiral, NGC 2874, also a red spiral or maybe a normal spiral in the process of turning red as most new star formation has apparently long ceased with the massive blue stars long dead but some slightly blue ones left in a few knots. Classed at NED as SB(r)bc and questionably (to me) as Sc by the NGC Project. It seems a very obvious barred spiral. Though the Hubble Space Telescope image makes the bar less obvious. Redshift data puts it at 180 million light years distant. This could be due to random motions in the group or could really mean it is unrelated. I lean toward it being part of the group as there appears to be a hint of interaction at the southwest end.

There are two other nearby NGC objects. NGC 2871 is just a blue star at the north end of NGC 2872. This type error is rather common in the NGC. Things get a bit more interesting with NGC 2875. I find two positions and two identities suggested for it. Both are shown in the annotated image. There\'s no question this object is in the northeastern part of NGC 2874. NED\'s description and position point right to knots in the northeastern arm. The NGC project, however, points to an area just above two apparent stars where the galaxy is rather dim. But gives almost exactly the same position as NED. Then says \"This is the north-following part of NGC 2874. Lord Rosse\'s micrometrically measured offsets point exactly at the rather knotty spiral arm, and his description is consistent with the appearance on the Sky Survey (DSS 1).\" This seems to describe the arm NED points to but their diagram points where I show it in the annotated image. Most likely their diagram is wrong.

A couple notes about the annotated image. Two faint galaxy clusters are anchored by a cD galaxy. These are noted by G/CG with the distance shown being that of the cD galaxy. At bottom center, there\'s an object that NED lists in some catalogs as a galaxy with an AGN and others call a Quasar. It is marked G/Q for that reason. Labels are immediately west of the object unless that would cover up some other object. In those cases, a line points to the object.

There are 5 asteroids in the image. They are labeled in the annotated image. Here\'s the list in order of closest to furthest from the center of the image. Magnitudes are estimates of the Minor Planet Center. These aren\'t always very accurate. Note that Burkam is listed as at more than a magnitude brighter than the rest but appears dimmer than the brightest. Some of this may be due to the lack of red sensitivity in my sensor.

When taking this object the first blue frame was dimmed by clouds. The following night I took two more blue frames. I seemed to get better color including the first blue than I did not using it so this is why there are 3 blue frames and only 2 of the other colors. 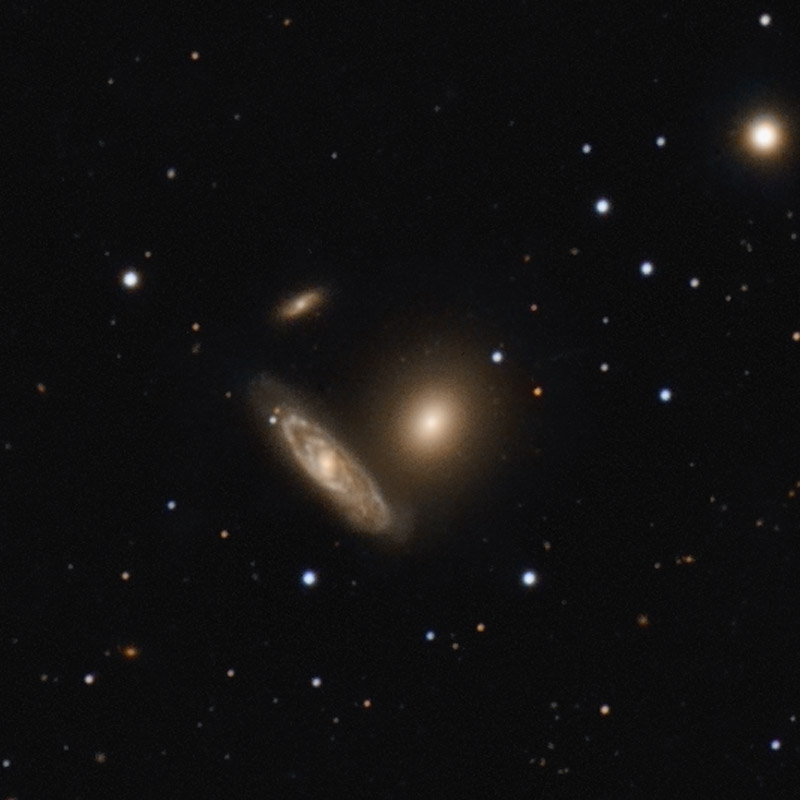 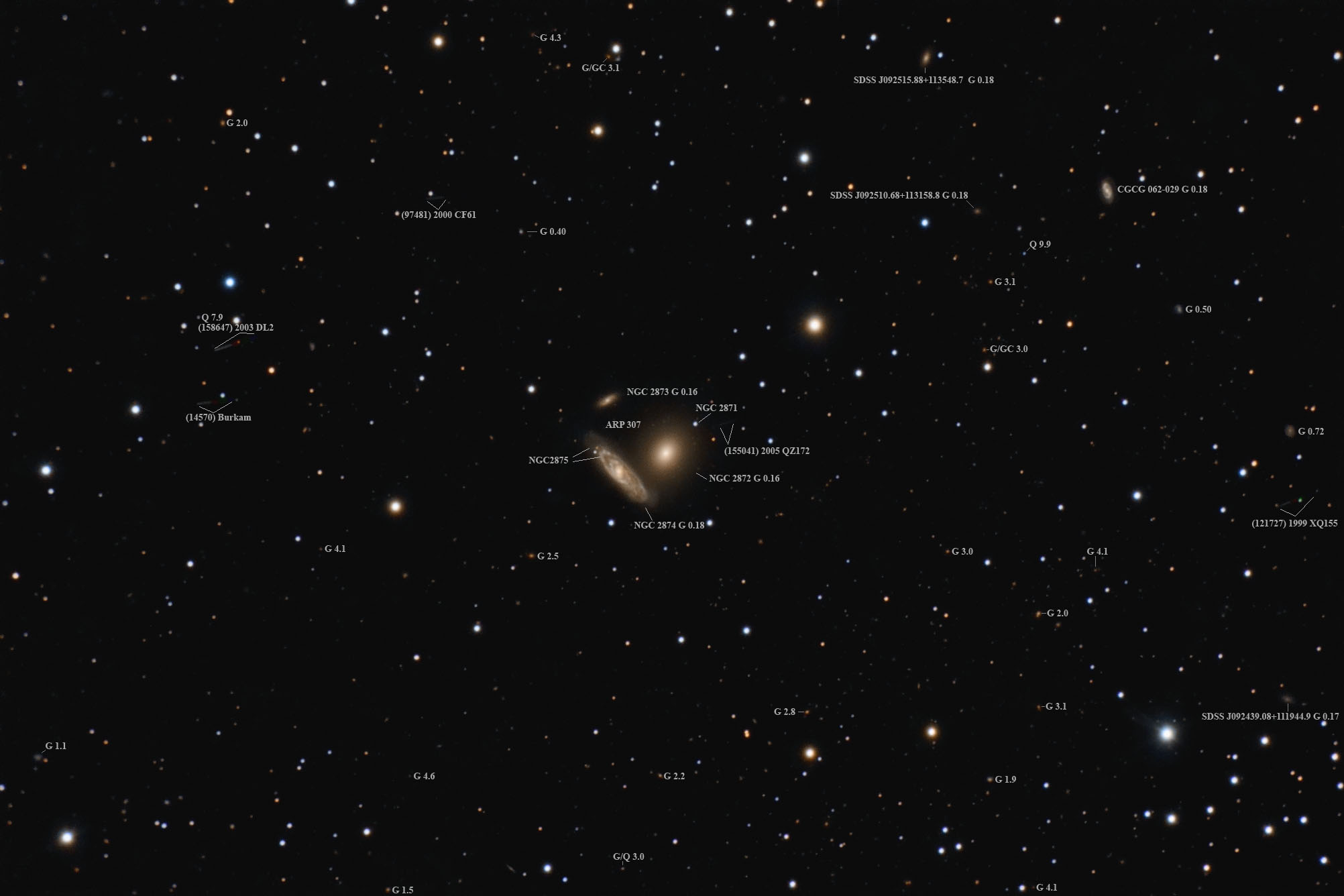 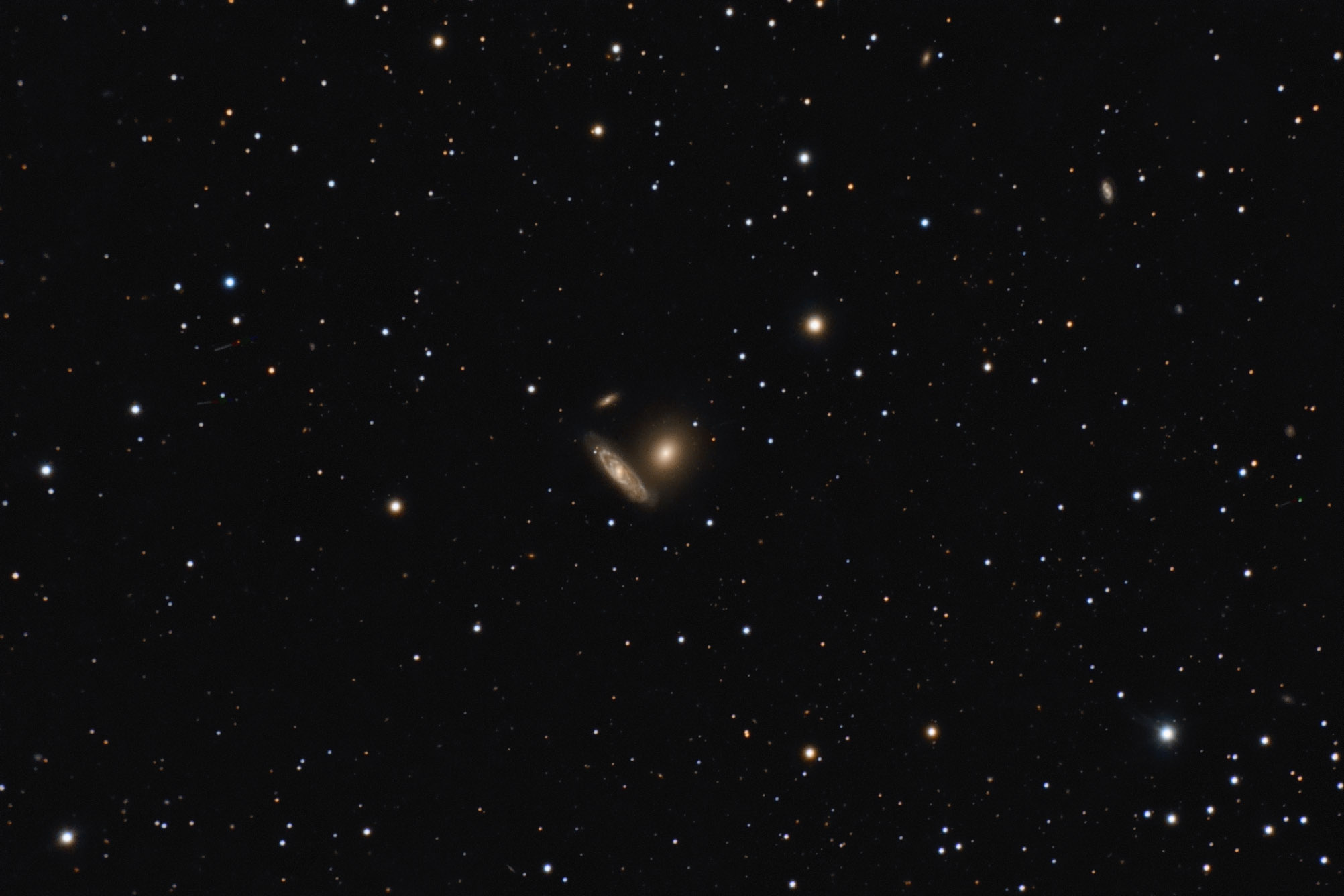