Hickson 98A is listed by NED as being SB0. 98B is S0 with 98C being just E and 98D as Sc or S0^+?. This latter galaxy isn\'t a true member of the group it seems as its redshift puts it at nearly twice the distance of A and B at 650 million light years. C\'s redshift shows 354 million light years which is close enough to be a true member of the group. There\'s a 5th galaxy in Arp\'s image, just southwest of C. It is SDSS J235412.56+002113.3 with no redshift or classification data given. Is it a member of the group? Maybe, as a similar galaxy that apparently is a member is seen to the upper right of the bright star above Arp 323. It is SDSS J235402.45+002723.7 at 360 million light years. See the annotated image for it and other objects in the field, especially asteroids. Galaxies are noted by G and their distance in billions of light years, quasars by Q followed by their distance also in billions of light years. The label is just to the right of the object unless I had to move it because of problems. In that case, I have drawn a line to the object. Two lines denoting the faint asteroid\'s start and stop points. All were moving east to west, left to right.

Note the long tidal tail descending to the southeast of Hickson 98B. It isn\'t mentioned by Arp nor did I see it on any image of this group I saw on the net. I\'ve not done an exhaustive search but so far I find no mention of this \"spike\" anyplace I\'ve looked. It barely shows in the POSS 2 plates if you enhance the heck out of the FITS version. It shows better on the Sloan image. After despiking Arp 192 have I now spiked Arp 323? It came as a complete surprise to me when I was processing the image. I came close to processing it out as a ghost image of some sort but it is real. My attempts to bring it out likely have it more sharply defined than it really is. Yet another to be retaken with far more imaging time in a few months.

The reddish oblong blur coming up from the bottom left of center is due to a 5th magnitude M5 star a bit out of the field of view. Enhancing the tidal plume also enhanced it quite a bit. I\'ve toned it down considerably but couldn\'t eliminate it totally.

This image sets my personal record (Edit: since broken) for the number of asteroids seen in one image. I found 12 known ones down to magnitude 20.3. You\'ll need a monitor that can see deep into the black to find them all. In order of brightness they are:

There appears to be the 13th asteroid, it is unknown to the Minor Planet Center. Unfortunately, this was taken in September 2009 and I only found it when I first looked at the luminance data in May 2010. So it was impossible to follow up on it. It is number 7 that I\'ve found too late for follow-up. I had to go back and count them as I had been just guessing before. I\'ve marked it with a question mark on the annotated image.

Magnitudes are estimates by the Minor Planet Center and may vary slightly from what they appear to be in my image. Color may be involved as my chip is blue sensitive so those that are red will appear dimmer than they really are in the luminosity image.

The SDSS image is attached with the tail showing faintly after I enhanced the image more than they did. I can\'t imagine this is a reflection of some sort. Though their image has its share of nasty reflections! For both of us to have the same reflection is too much to swallow. I\'ve attached the SDSS image as well as mine and the annotated image. 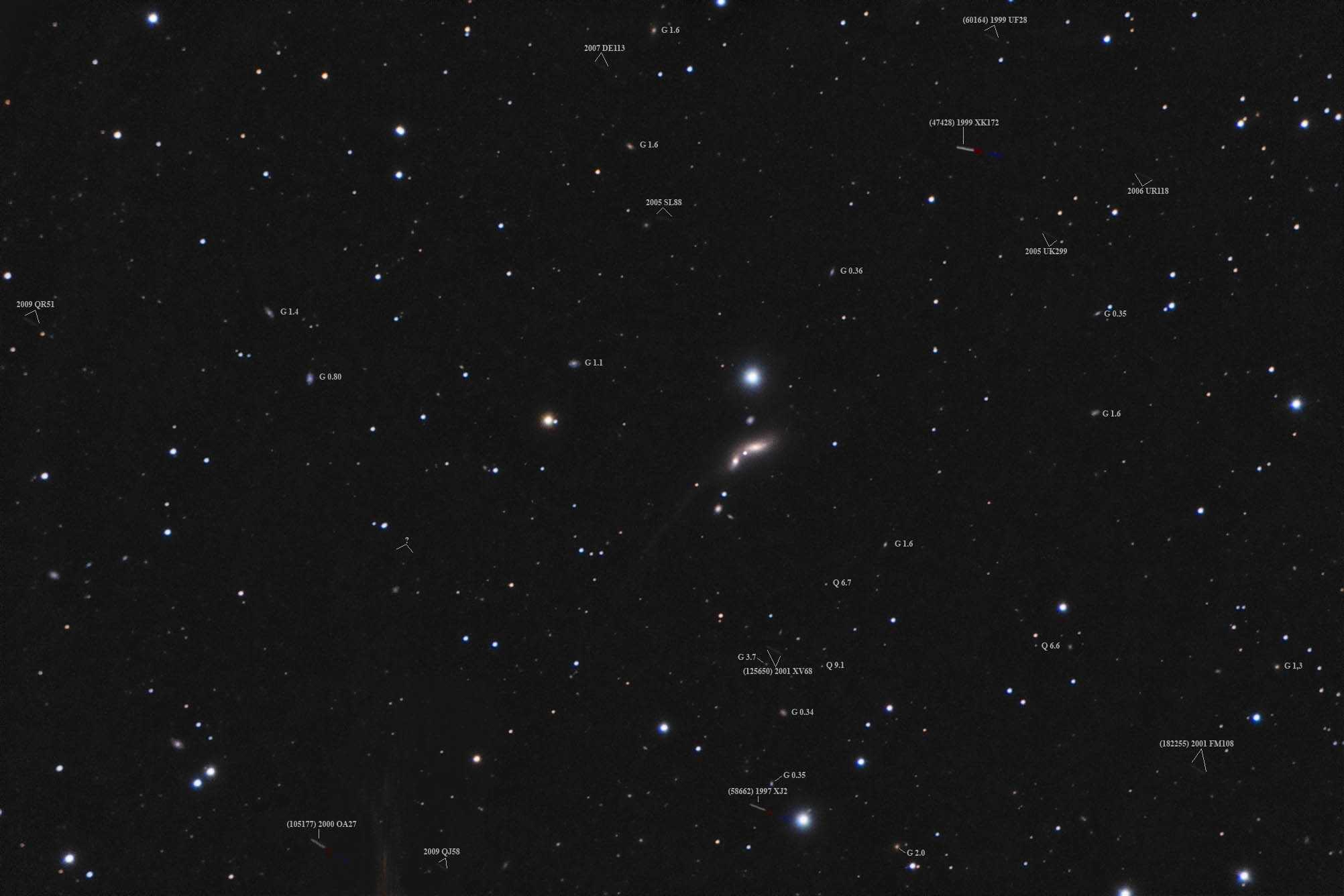 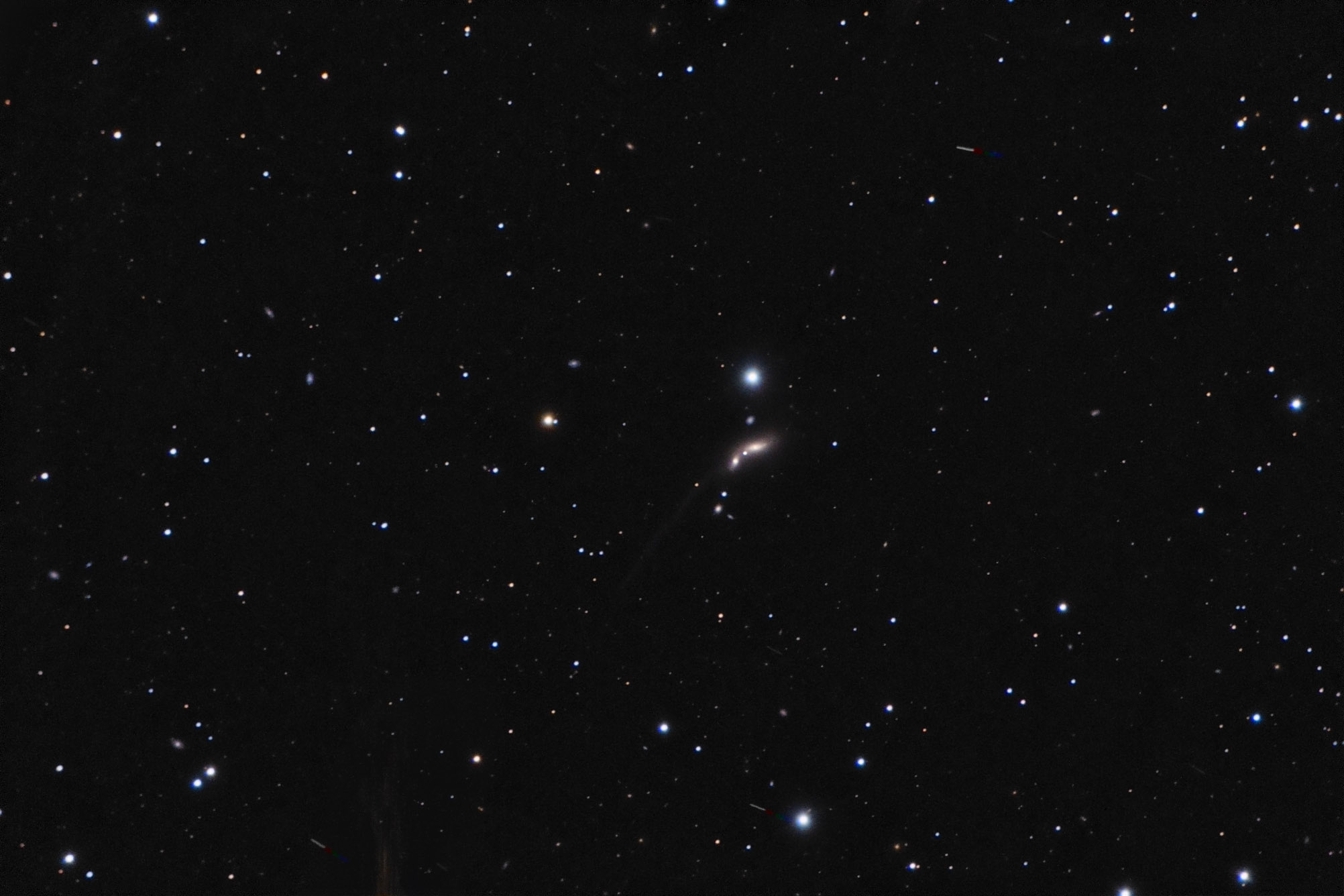 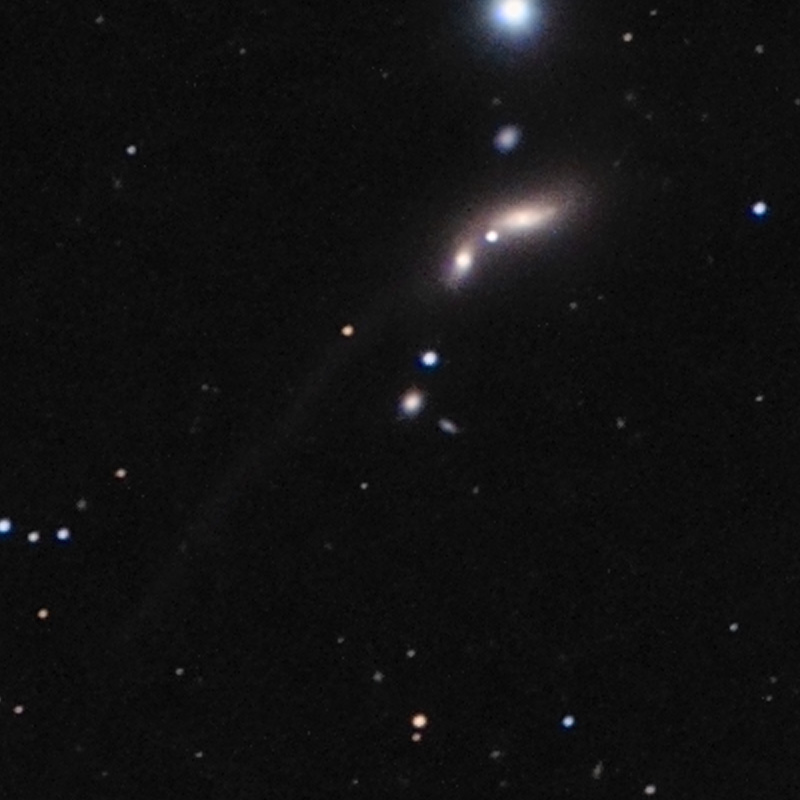