ARP 327, also known as Hickson 34, is a small group of 4 galaxies headed by NGC 1875, a very large E2 galaxy with a possible AGN (Active Galactic Nuclei). Its redshift puts it at about 410 million light years. The other members have slightly different redshift distances but this is likely due to interaction among themselves. Since NGC 1875 is the big gorilla of the group I\'ll assume it is little bothered by the companions and thus its redshift is the best indicator of the group\'s distance.

The other galaxies in the group, north to south carry the same designation in most catalogs, just that they are numbered or lettered west to east which also happens to be north to south. The PGC catalog does list them separately so that\'s what I\'ll use for the other three. North to south, they are PGC 17173 an 18th magnitude S0 galaxy, PGC 17175 a 17th magnitude SBd galaxy and PGC 17176 a 17th SA0 galaxy. It is PGC 17176 that seems most torn up by the gravity of the system.

A note at NED says this about the system:
The four galaxies of the group form a characteristic chain. This kind of configuration is frequently found in compact galaxies groups and is easily explained by the N-bodies simulations of clustering (White et al. 1987) which often produce filamentary structures.

Arp did classify this group under his classification \"Group Character: Chains of galaxies. This was long before the paper explaining them.

There appears to be a possible 5th member of the chain, much fainter and not nearly as red. It is HCG 034:[RHF91] 02 per NED. Since HCG is their notation for Hickson Compact Groups they must consider it part of Hickson 34. Though there\'s no redshift data to determine if it is really a member or just a line of sight interloper. Its different color bothers me. Arp apparently didn\'t include it in Arp 327. In fact, he didn\'t include NGC 1875 in his group! His description is; \"Three distorted galaxies in general line toward east.\" Thus he is leaving NGC 1875 out of the chain for some reason. Probably because it isn\'t distorted though I don\'t see much if any distortion in PGC 17173 either.

Unfortunately, the night was poor when I took this with my seeing a bit worse than 3\". I needed a much better night to get much detail. I\'ll have to try again next winter.

The largest galaxy SW of Arp 327 2/3rds of the way to the lower right corner is CGCG 421-036. It is a bit over 400 million light-years away so again, likely a member of the same group. Even closer to the corner not far from CGCG 421-036 is 2MASX J05205314+0633047. It is at the same redshift distance as CGCG 421-036. Continuing due west almost to the edge you come to another galaxy at this distance, 2MASX J05203488+0633083. Continuing west and north a bit is a galaxy mostly off the image but its eastern edge is seen just poking into the image above a pair of equally bright stars. This is UGC 03291 also at the same distance. So it appears the group that Arp 327 is part of is quite large and extends off my image to the west. Something I suspected so put it a bit east of center but not as far east as I should have.

Since the SDSS hasn\'t surveyed this area yet, there isn\'t much information on the few other galaxies in the image. Many are apparently anonymous.

Arp\'s image of the chain, including the two galaxies he excluded, is at:
http://nedwww.ipac.caltech.edu/level5/Arp/Figures/big_arp327.jpeg
He had much better seeing than I did. I believe this image was taken with a somewhat blue sensitive emulsion, likely 103a-D coupled with a yellow filter. A combination he seemed to like I\'ve recently learned. Why I don\'t quite understand. My guess would be, of the choices available to him, it best matched a visual representation. It would tend to even out the red of population 2 stars and the blue of population 2 stars giving a more even response across the spectrum. That\'s my guess, I\'ve seen nothing on it. 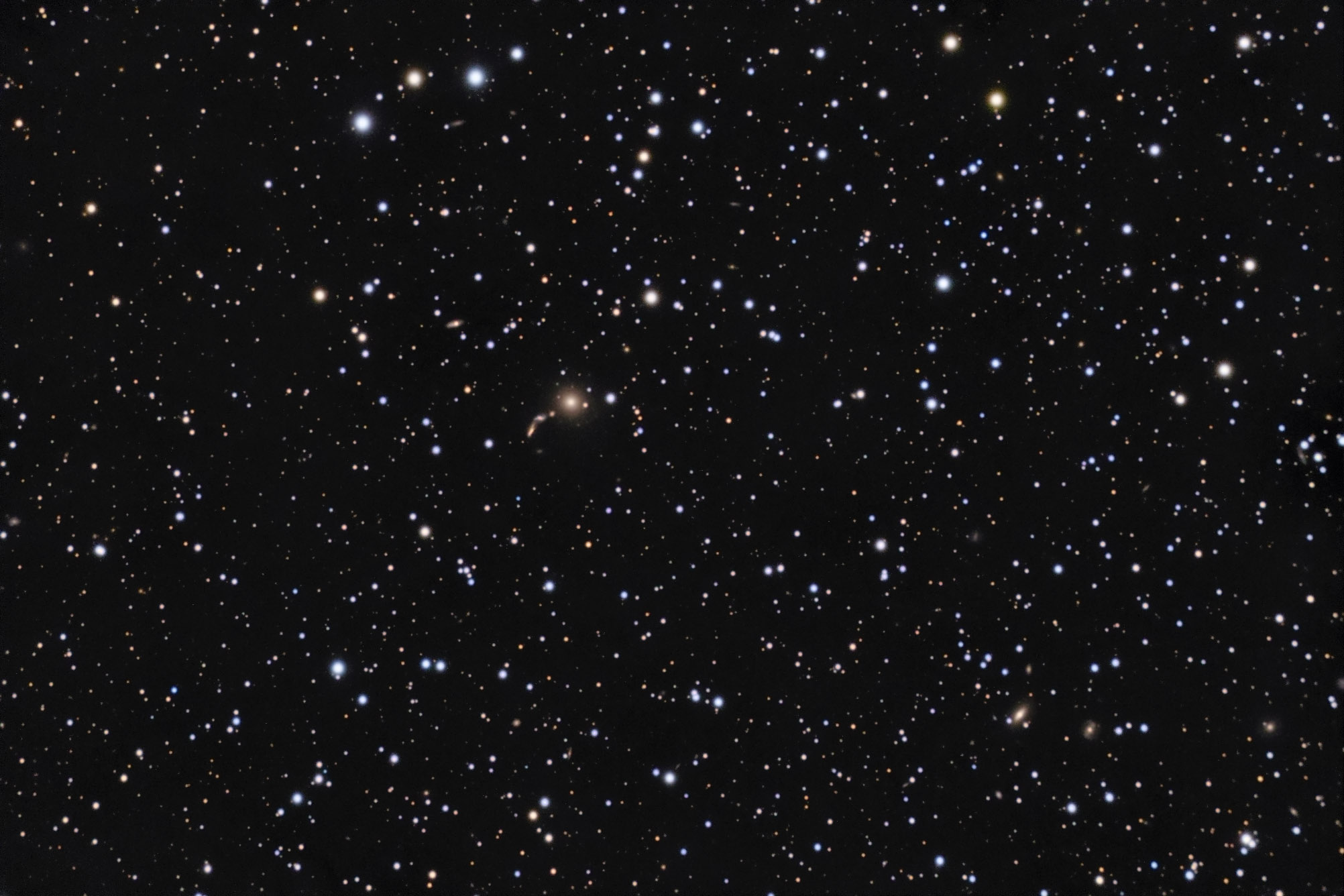