Arp 328/Hickson 72/UGC 09532. This is a chain of galaxies located in Bootes. All but one of the galaxies are about 600 million light-years distant, the other nearly twice as distant and thus not a member. Before going further and looking only at the full or cropped image, see if you can determine which is the odd galaxy out. It may not be the one you think. Arp put this group his class for galaxy chains and had this comment: \"6 galaxies more or less in line; center one has semi-stellar companion.\" There are 7 in the chain including the sneaky interloper. Hickson also includes only 6 but one he includes is the \"fraud\". NED shows 7 galaxies for Arp 328 while Arp himself limits it to 6 as does Hickson. Both leave out the most southern. Yet one note at NED reads: \"With respect to the original Hickson list we have included the amorphous object g which clearly interacts with galaxy c. This is the one I\'ve marked as VV164g. G is blue and does seem to have a bulge toward c but I\'m not sure this is sufficient for it to be clearly interacting. This brings us to the \"semi-stellar companion\" I assume he is speaking of D. While in my image it may appear to have two cores of about the same brightness the SDSS image clearly shows the southern one to be a star. There is a slight brightening north of the core, best seen in the Sloan image but it isn\'t semi-stellar. Nor can I see much of anything in the burned-out core of Arp\'s image as it is on the website. But E does show what appears to be a distant galaxy through its disk on the east side. Could this be what Arp refers to? It does show in his image. If the possible 7th galaxy is included then E would be in the center. I\'ve found nothing to decide this issue.

Below and left of component g is yet another compact golden elliptical like galaxy, SDSS J144759.73+190202.0 at 18th magnitude. No one considers it part of the group. Nor is any redshift data available for it. There are several small galaxies about component A as well. Are they satellites of A or distant line of sight galaxies? Probably the latter though a note at NED considers this possible.

Arp 47/MCG +03-38-014 is classed by Arp under Spirals with low surface brightness companions on arms. I suppose that refers to the little galaxy off the north arm that curves back sharply. That galaxy is 20th magnitude SDSS J144715.24+185134.8. No redshift is given so it\'s unknown if it is truly a companion. There is the very obvious galaxy to the west of MCG +03-38-014. It is 16.6 magnitude NPM1G +19.0402. NED and other catalogs consider these two a pair. In fact, NED lists these to under Arp 47. Seems way too bright to be the companion on the arm Arp refers to. So which is it? I still think it the one that definitely appears to be on the arm and certainly is faint. Unfortunately, NPM1G +19.0402 doesn\'t have a redshift value either which doesn\'t help us any. NED makes no attempt to classify this obvious spiral or either \"companion\".

Arp\'s image is one of his poorest. This isn\'t Arp\'s normal work. Makes me wonder if some night assistant took this data rather than Arp himself. He may have had quirky ideas bordering on crackpot in later years but his telescope work was very precise. One possibility is Arp did, like I did, and took both of these with one image. This would have pushed the Winn Corrector to its limits and maybe beyond. Arp 48 may have been right at the edge of the image where the Winn Corrector couldn\'t quite handle the prime focus distortions. The stars radiate away from the position of Arp 328 like it was centered and this one just too far away for full correction. The elongation of the star in the lower right corner seems greater which fits this idea. I can\'t see Arp guiding this poorly.

There\'s no redshift data on anything in the field other than these two objects. NED lists several thousand galaxies in my field but except for these two Arp\'s, there\'s nothing on it. Note however that both are at the same approximate redshift distance and thus quite likely part of the same group. 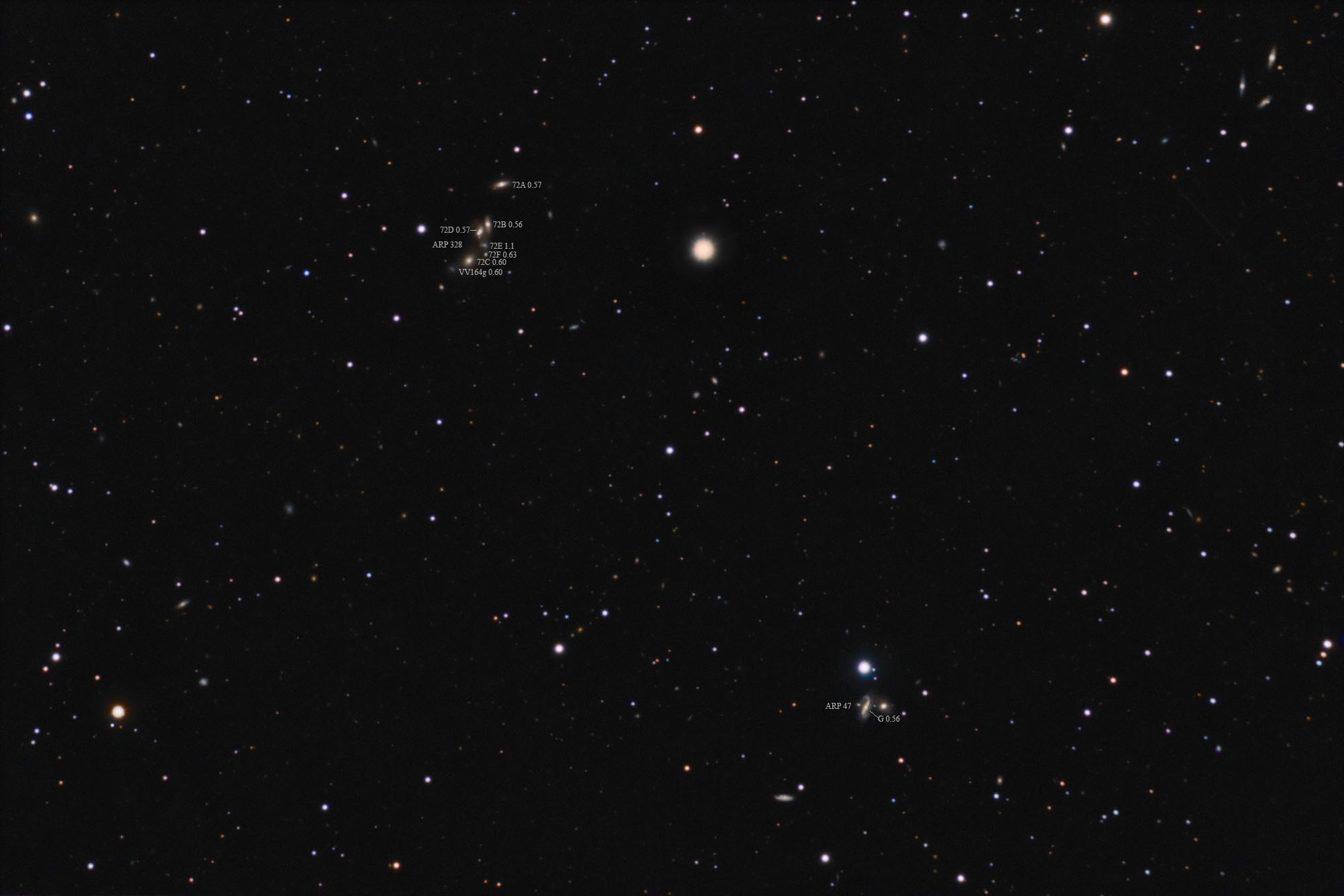 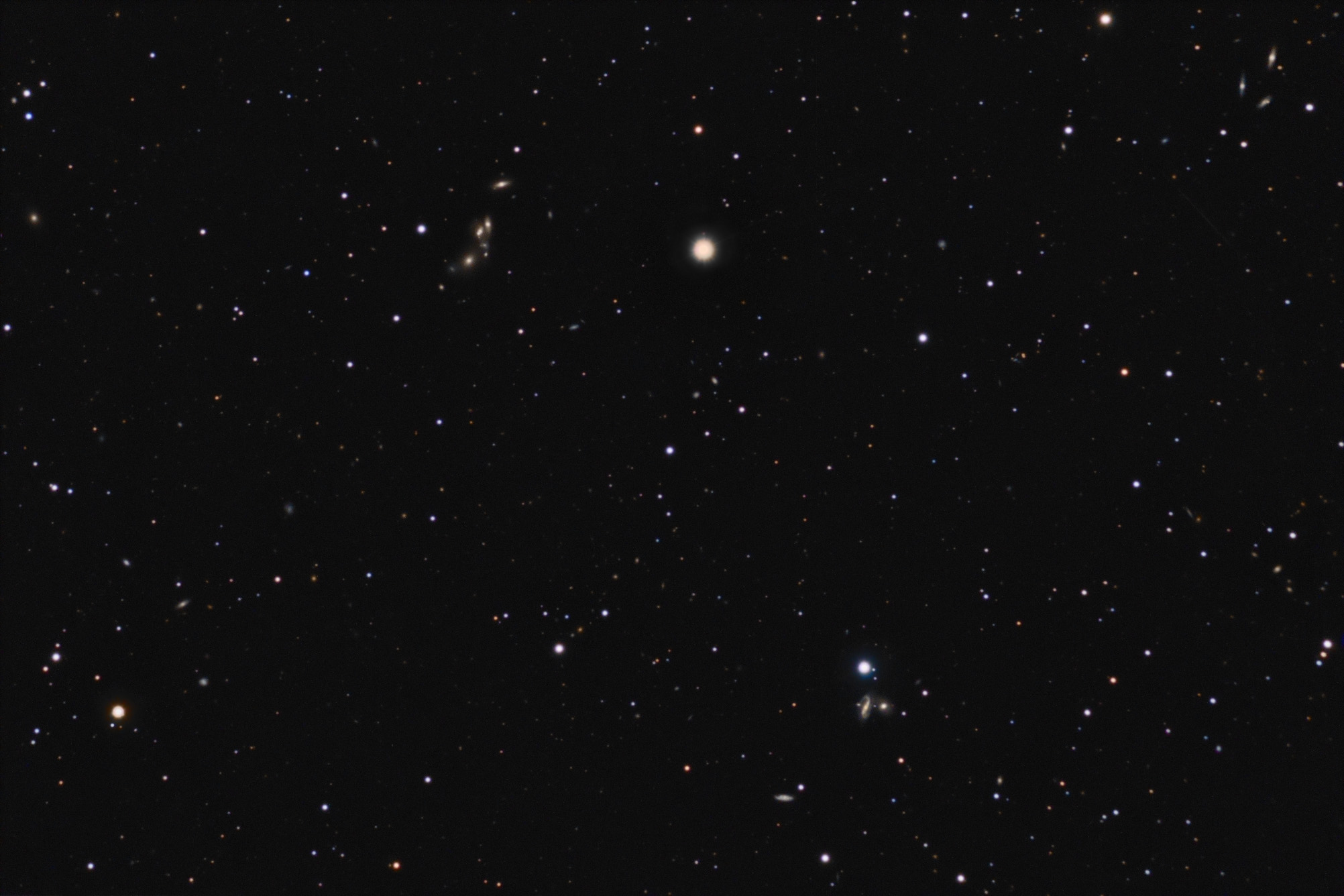 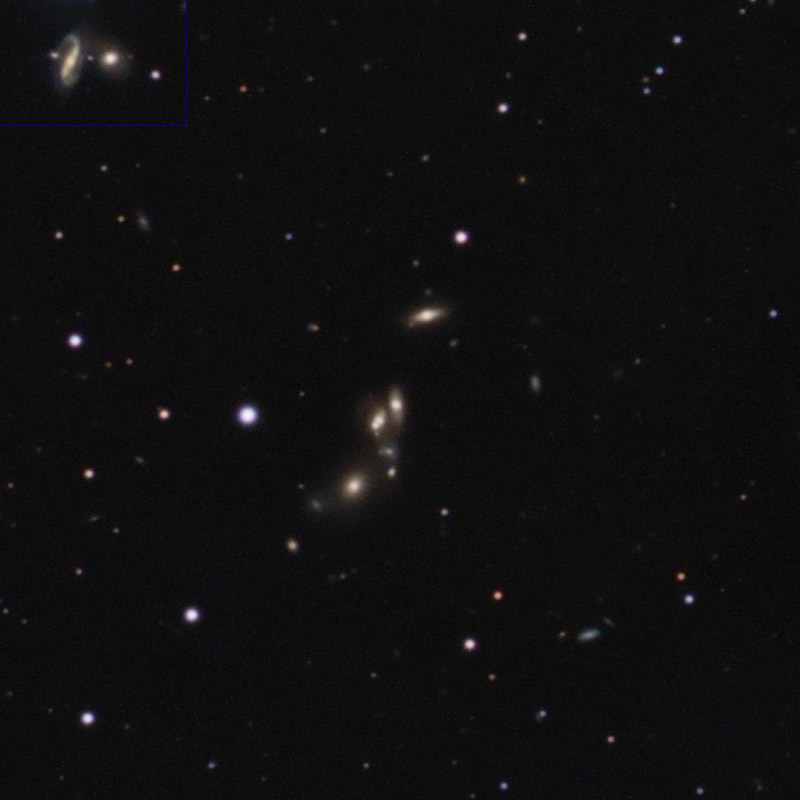