Arp 329 aka Hickson 55 is yet another chain of elliptical galaxies Arp logically put in his Group Character: Chains of galaxies class. Also known as UGC 6514 1 through 5. This is a rather puzzling chain. 4 of the galaxies show a redshift that puts them at about 700 million light-years with only a very small variation, smaller than normally found in such chains in fact. But then there\'s that oddball one. Can you spot it?

The odd galaxy out is the second from the top, PGC 035576. It is the smallest and bluest of the bunch. Its redshift puts it a bit more than twice as distant as the other four at about 1.5 billion light-years. No wonder I picked up so little detail. So is it just a line of sight coincidence or is it really much closer. Arp would likely argue for the latter while most other astronomers the former. To me, its different color and its smaller size would cause me to vote with the coincidence theory. Oddly, Arp seems to have no comment on this one. Though he does state in general that he considered such a coincidence to be a 1 in 10^4 to 1 in 10^6 chance level. I don\'t understand how he came up with this, however. Sounds to me to be calculating the chance in a particular group for such a coincidence rather than the chance that some groups will have such a coincidence. I know I have at least one math prof on the list, maybe he has some ideas on this. Arp also considered chains even without an oddball to be highly unlikely due to chance. Now we know that in small groups gravity will tend to cause them to fall into such chains. Also, remember we are seeing this in 2D, we really can\'t say much about the depth involved. Though the math now says real chains should be about as common as we find them to be.

Very few of the galaxies in the image are in any catalog except the MAC which gives little useful information. I find redshift data mostly missing except for the Hickson group and one other.

The elongated, very bright, yellow star near the left edge is Struve 1551, a double star the brighter is G5 and thus nearly white since I balance to G2 being white. Its companion appears somewhat yellower. They are separated by about 7\" and thus overlap due to the heavy stretch applied to the image. 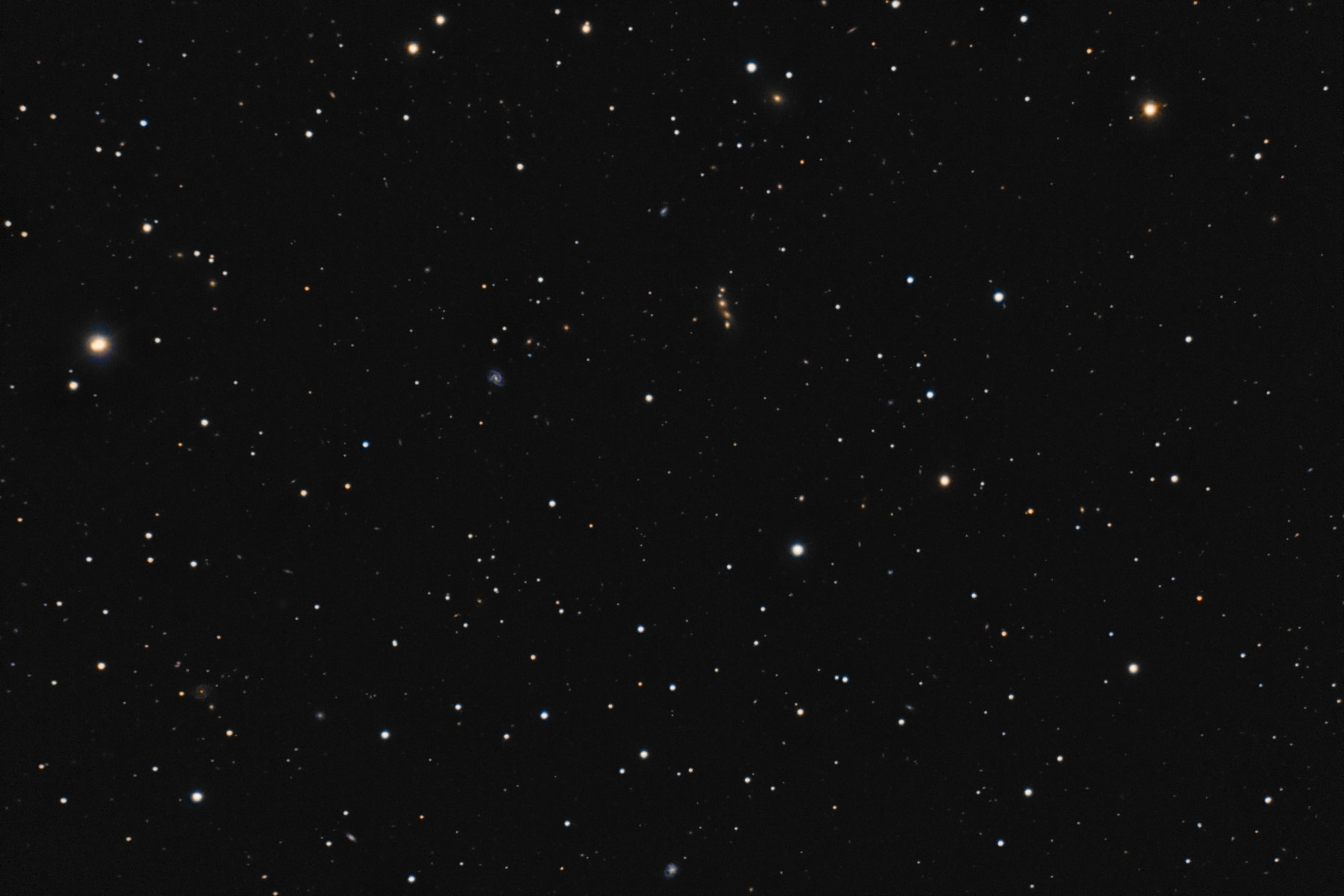