Sometime, probably after January 11 and before January 19, the light of a type 1A supernova in the starburst galaxy M82 hit the earth. It wasn\'t \"discovered\" until the night of January 21 in England. A group of students got an unexpected introduction to what to do when an event such as this is first seen. You can read about it at http://www.ucl.ac.uk/maps-faculty/maps-news-publication/maps1405. I\'ve seen images taken as early as January 19 that show it but those taking the images didn\'t realize what they had or didn\'t look at the data until days later. Earlier images likely exist. These are referred to as pre-discovery images. I first heard of it on the 22nd but it was cloudy. It sort of cleared Wednesday night, the 23rd of January (all times and dates are UT, not local time). I had rather poor seeing but took what data I could prior to moonrise. The temperature here was running down around -35°C when I started and dropped 3 more degrees while I was taking the data which meant my image scale changed adding to my processing steps. My red data was taken when the moon was brightening the sky though not yet risen.

Starburst activity creates many short-lived massive stars that go supernova after only a few million years of life. Such supernovas are called type II supernovae. So you\'d expect such a massive star\'s death to be the cause of the supernova. But, just to be contrary I suppose, this is a type 1a which is caused by the sudden destruction of one or maybe 2 white dwarf stars. White dwarf stars are much less massive stars and live at least a billion years or longer. So the star or stars that caused this supernova predate the starburst activity in M82. Such supernovae are thought to be standard candles so if you know the apparent brightness as well as how much dust and gas between us and the supernova dims the light the distance to the supernova can be calculated. Thus this supernova might help better determine the distance to M82 which is currently put at about 12 million light-years. The problem is the light of a fresh type 1a supernova should be blue. This one is somewhat red. Not because the supernova is red but because it went off deep inside the dusty M82\'s disk. Dust reddens starlight same as it reddens our sunsets and sunrises. This will make estimating the loss to dust and gas rather difficult. I\'m sure all sorts of methods of adjusting for this will be tested by this event.

M82 is also Arp 337 so I\'ve added another supernova to my collection of Arp galaxies. A surprising number of them in my collection were caught with supernovas including M51 and M101 and about a half dozen others. I\'ve lost count so need to go back and look that count up. Seems peculiar galaxies that made his list are above average in the number of their supernovas by my rather unscientific survey.

I\'ve made an annotated image showing the surrounding galaxies, galaxy clusters, and quasars. I found this field particularly difficult to work with. Many of the quasars listed in NED, as well as some galaxies, had vague coordinates. Often there was nothing close to the right magnitude within the error circle or even well beyond the error circle. Rather than guess I didn\'t include these vague positioned objects. Even when I could identify the object it was sometimes listed as both a quasar and a galaxy yet of typical galaxy distance and sometimes showing a slight disk rather than the point source of a quasar. I listed these as both Q and G often with a question mark. NED usually preferred the quasar designation even when a small disk is seen. While NED listed about twice as many galaxy clusters as I show I only listed those with a Big Cluster Galaxy listed in NED such that I could pin down its location. Some used photographic redshift, designated with a p after the light travel time figure, for the cluster but spectroscopic redshift for the BCG. The latter is likely more accurate though in these cases they were in rather close agreement. Many times I find a wide difference but not with these.

M82 was discovered by Johann Bode on December 31, 1774 the same night as he found M81. Like M81 Koehler may have seen it sometime between 1772 and 1778 but didn\'t record it until 1779. Pierre Méchain then saw it in August 1780 and likely reported it to Messier who observed and recorded it on February 9, 1781. William Herschel then observed it on September 30, 1802. It is in the original Herschel 400 Observing Program. My notes from April 15, 1985 on a humid night with my 10\" f/5 Cave Newtonian at up to 150x reads: \"Bright large streak with an even brighter central core. It can even be seen in my 8x50 finder on this rather low transparency night. Several dark lanes are seen near the core. It takes high power well though, this night I\'m limited to 150x due to low transparency.\" 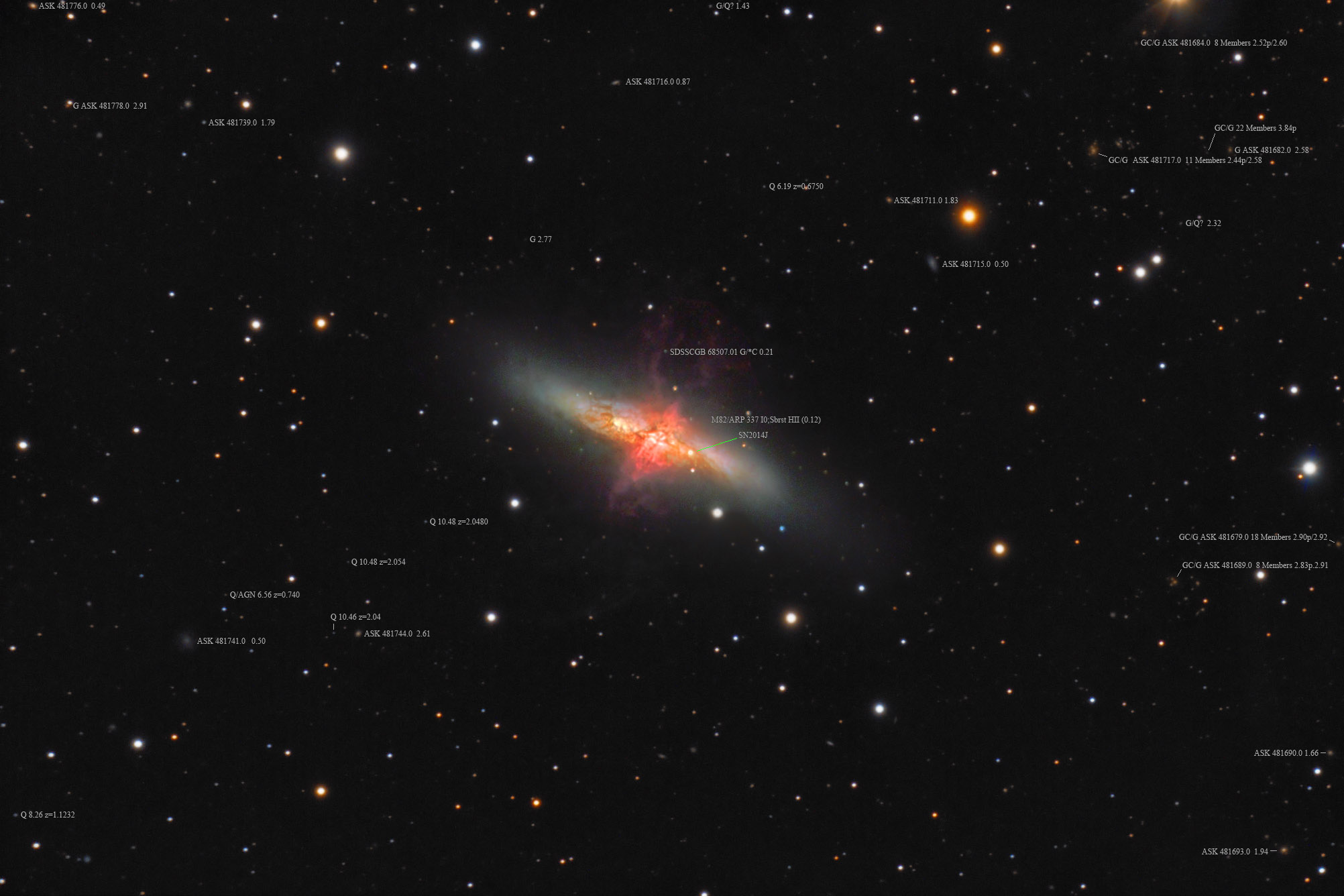