M1 is a supernova remnant. It\'s a bit over 6,000 light-years distant and located by the southern horn of Taurus the bull. The supernova was seen in the year 1054, nearly a thousand years ago though the explosion happened over 7000 years ago, its light has taken over 6000 years just to reach us on earth. The star was crushed into a neutron star by the explosion. It is visible in my image as the dimmer of the two stars near the center of the nebula. It is a pulsar that pulses about 33 times a second. This was first detected at radio frequencies but later Don Taylor\'s students were able to detect it at visible light frequencies. It was the first and still one of a very few seen to pulsate in visible light as well as at radio frequencies.

It is often called the Crab Nebula because early observers seeing the nebula only in visible light through small telescopes thought it resembled a crab\'s claw. So why it isn\'t called the Crab\'s Claw Nebula I don\'t know. Too many words?

It was first seen by John Bevis sometime in 1731. Messier stumbled across it on August 28, 1758 while looking for Comet Halley which was making its first predicted return at the time. This then was his first discovery of a comet-like object. He knew it wasn\'t a comet since it didn\'t move but recorded it to avoid being fooled by it again. He had to watch it over time to see it didn\'t move like a comet would wasting valuable comet hunting time. Though like with M2 he wasn\'t its initial discoverer he did discover it independently not knowing of its prior discovery. M3 is the first he found before anyone else and that was in 1764 some 6 years later. Until then he wasn\'t actively looking for such objects.

The blue light of the nebula is synchrotron radiation. Light emitted charged particles forced into a curved path by a magnetic field or accelerated in a straight line. It is the former that creates the blue glow here. The pulsars light ionizes the gas expelled by the supernova and the strong magnetic field of the pulsar force these into curved paths creating the blue light. The red is due to ionized hydrogen atoms caused to glow by the extensive ultraviolet light emitted by the pulsar. The light of the nebula is also highly polarized due to the magnetic field but I don\'t have the filters needed to show this.

This, like many M objects, was a very early image when I moved to digital and I did some things quite wrong in taking the data. Also seeing this night was not very good. Put the two together and it isn\'t a great image. I reprocessed it a year later which improved things somewhat. Then third reprocessing improved things further. I\'ve attached a crop showing all three. The full image is from the third processing of it. Another for the reshoot list that likely won\'t happen. 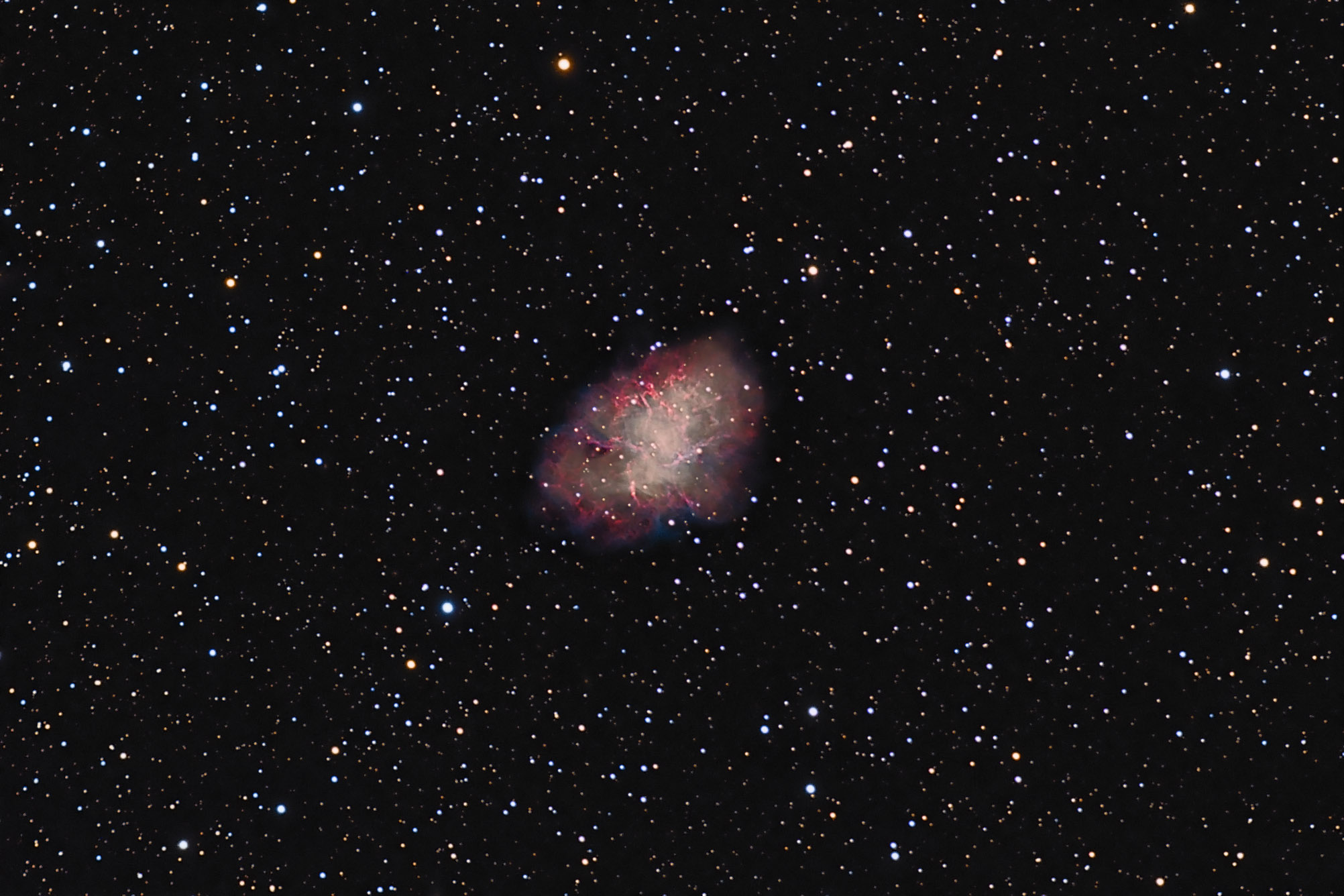