M10 is a rather large, in angular size, globular in Ophiuchus about 14,300 light-years from us and about 16,000 light years from the center of the galaxy. Most globulars are rather well endowed with variable stars. Not M-10, it has only 3. While Messier didn\'t discover many of the entries to his catalog he did discover this one on May 29, 1764. He described it as a \"Nebula without stars, very pale.\" William Herschel was the first to see its true nature as being composed of stars saying \"beautiful cluster of extremely compressed stars\".

Most Messier globulars are so bright in the core I can\'t use my standard 10 minute luminance exposure without burning in the core. I was surprised to find that while it appears rather bright to the eye I was still able to use 10 minute luminance exposures. In fact, I\'d not intended to use a luminance channel, just a bunch (6 each) of RGB exposures. Unfortunately, my horrid 2012 weather wiped most of those out leaving me with too few. So after several nights of trying I did finally grab 4 luminance frames. Likely part of the reason I could use 10 minute frames was the very poor transparency that night.

There are a couple asteroids in the image. The most obvious is on the left a bit below the centerline. It is (119503) 2001 UR124 at an estimated magnitude of 18.2. Normally such a bright asteroid would really stand out. It is rather dim here due to the poor transparency. The other one is difficult to see. It is near the bottom a bit left of centerline. The left end of the trail is lost in a rather dim star at the apex of 5 dim stars in the pattern of the ^ symbol. It is (69357) 1994 FU at an estimated 19.1 magnitude. There\'s a third one in the southern part of the cluster but at magnitude 19.7 it didn\'t survive the color image. I can barely see it in the luminance FITS stack if I use averted imagination. It is (154523) 2003 FF92.

There are several galaxies in the image but only 2 have redshift values. With only two I didn\'t prepare an annotated image. One is lost among the stars of the globular less than halfway from the core to the edge (6dF J1656595-040746). The other is near the left edge above center and is just a typical small red fuzzy spot. NED lists both with EXACTLY the same redshift. z=0.087107. I find this very unusual. I\'ve never seen this happen even in very dense galaxy clusters. Is one a misprint? That value translates to a light-travel time distance of 1.14 billion light-years using NED\'s 5 year WMAP calculation.

An HST image of the very center of the cluster in false color can be seen at:
http://www.nasa.gov/mission_pages/hubble/science/cluster-m10.html . The galaxy in the lower right corner of the HST image is not the one in NED. It is much closer to the core. The HST image has north to the left while mine has north at the top.

M10 was one of Messier\'s discoveries, seen on May 29, 1764. It wasn\'t until William Herschel recorded it that its stars were first seen. 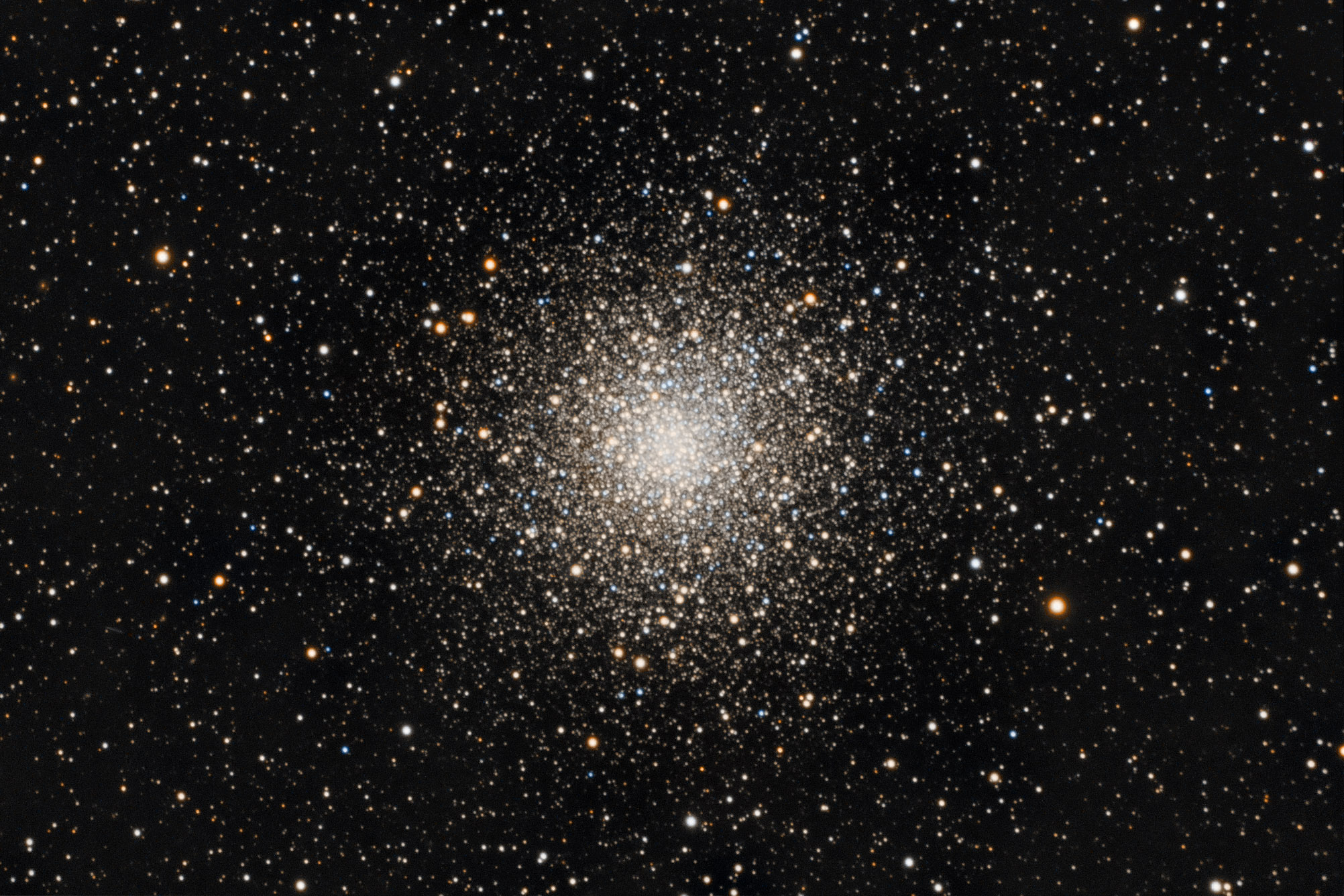