Once in a while, I find I\'ve missed something everyone has imaged but I haven\'t or it was taken back in my film days for which nearly all were destroyed. I don\'t remember ever taking M39 even on film other than with a 50mm lens when taking the entire constellation of Cygnus. Time to rectify that oversight even if my only imaging system is ill-suited for it.

M39 is best seen in binoculars or a small telescope. But a 14\" scope is all I have for digital work right now so it will have to do. The cluster may have been first recorded by Aristotle about 325 BC as a comet-like object. Modern discovery is usually credited to Charles Messier in 1764. Though Burnham claims it was Le Gentil in 1850 that first recorded it. That idea is not all that well accepted. It appears certain Messier\'s discovery was independent of the others so I\'ll go with that. It is visible naked eye so Aristotle and many others certainly could have seen it.

The cluster is about half a degree across and triangular in shape. My field is just wide enough to catch the base of the triangle but the top is out of my field. It is very scattered. So much so William Herschel refused to include it saying: “Consists of such large and straggling stars that I could not tell where it began nor where it ended. It cannot be called a cluster.” but his son John did saying: “A star of 7th mag [position taken], one of a large loose cluster of stars of 7th to 10th magnitude; very coarsely scattered, and filling many fields.\" The scopes they used had very small fields of view making seeing it as a true cluster very difficult.

The cluster consists of all main branch stars, no giants are seen. Only stars of A0 and cooler are seen which gives it an age of about 230 to 300 million years. Sources vary but most are at or near the top figure of 300 million years of age. Its distance is also somewhat undecided. WEBDA says it is about 1050 light-years distant. Most other sources I found said around 825 light-years.

There are only two galaxies in my field with known redshift. NED only lists two others without magnitude or redshift data. The two with known redshifts appears related. They are close together at the bottom of my image right of center. Both very red due to being seen through a lot of dust in the plane of our galaxy. The face on spiral is LEDA 086597 and is classed as a face on spiral with a redshift distance of about 160 million light-years. To its right is LEDA 167495 with a redshift putting it about 150 million light-years distant. I found no classification for it.

As I knew clouds were a problem I took 3 10 minute shots in each color hoping for at least 2 being usable. Nope, only one each was and the red one I used was marginal. Still, with stars, I can get away with only 10 minutes of data per color. 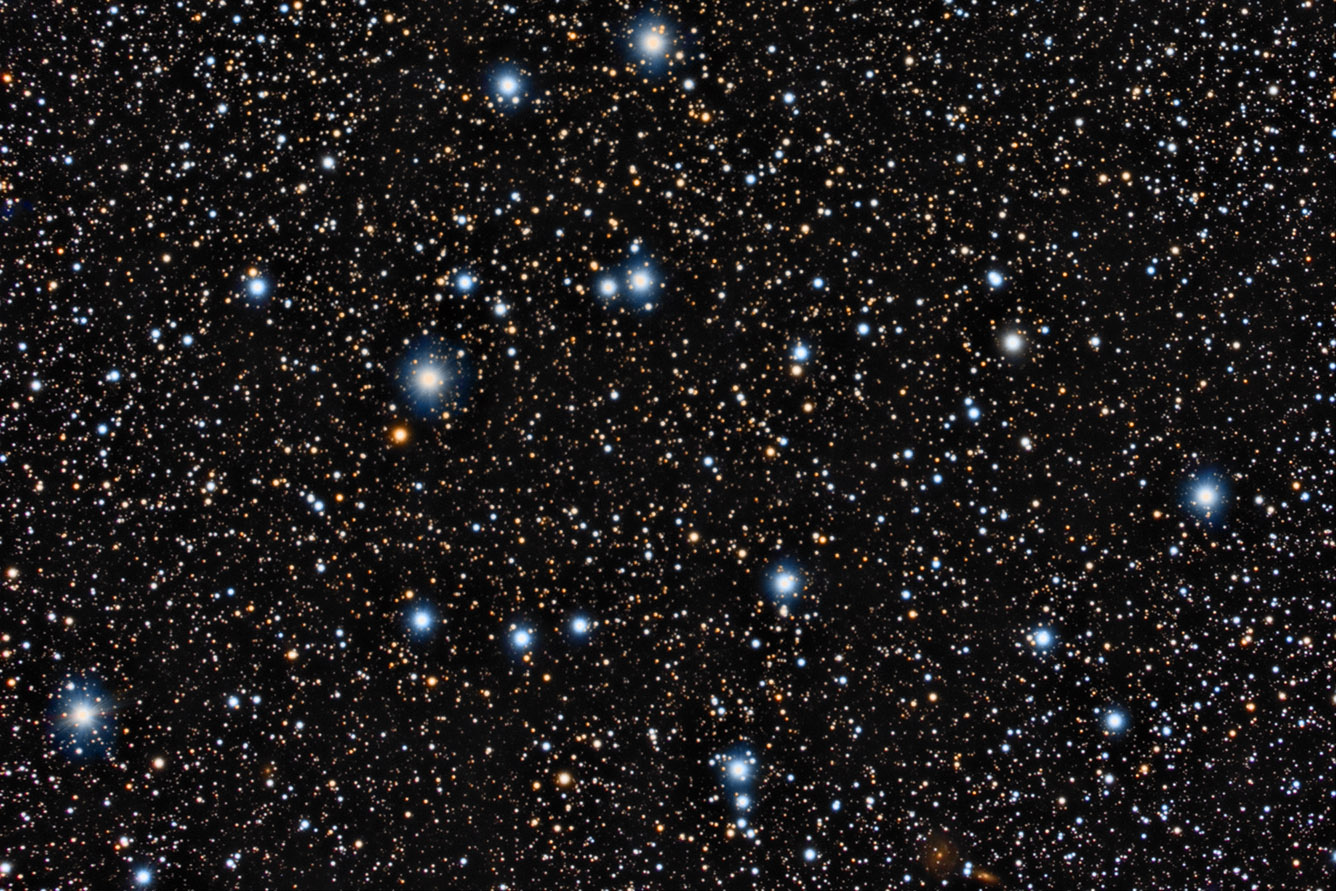