M59 somehow escaped my early imaging efforts when I first went digital. Probably because it seemed a very ordinary, featureless elliptical galaxy. Which it basically is in my image. When I noticed this omission and planned on adding it to the to-do list I saw two other galaxies to the north and a bit west that did look interesting. Since all could be fit into an image that\'s what I put on the list. Finally, in May, the field was taken. Unfortunately, when I went to process it I found a disaster. The blue frames, taken first were fine, the luminance taken next started out fine but by the third were very bright as if a full moon was nearby. The fourth was so bright even the background was above 40K ADU and worthless. Next came green which was also strong at over 20K background. Red\'s two images were better at 10K for the first and 3K for the second. Normal would be 600 on a bad night. What the heck. Then I went back and looked at visual posts from that night and there was a great aurora seen. I slept through it and my M59 was mostly destroyed. I decided to try and salvage it as otherwise it would be next year to try again. I only had 2 good luminance frames and one bad one that helped a tad to include as long as I masked out the saturated portions. I used mostly the best red. Green frames were mostly used to create a pseudo green layer. Fortunately, color noise is well tolerated by the eye-brain if you don\'t look too closely. With limited luminance, I tried adding the blue to make a pseudo luminance but with M59 being lacking in blue this didn\'t work very well and I went back to just using the 2 and part of the third luminance frames even though the background was very high and sky noise very great. I had to do a lot of background processing I\'d normally never do to make a presentable image. Most of the background is fake having masked out the stars and galaxies to allow them to come through. This cost a lot of faint detail.

Now with that disclaimer out of the way on with the normal text.

M59 turns out to be a rather odd elliptical, or maybe not so odd since most are thought to be the result of many mergers. It has both a flat disk like a spiral buried so deep in the E5 body it is seen only in radio telescopes and rotates retrograde to the general rotation of the rest of the galaxy. Strong evidence that it merged with something rather large that still retains some of its spiral nature. Seen only in radio it isn\'t seen in visual though the ends of the galaxy are a bit more rounded than ellipticals without such counter-rotating disks. At least that\'s what I read. I didn\'t notice it. While redshift says it is 37 million light-years distant non-redshift measurements say 50 which is more reasonable for being a Virgo Cluster galaxy. Size is hard to determine due to my extremely high background. Using the best luminance FITS frame it almost runs off the bottom of the image. I suspect it really does run off but with my limited data, I can go with only what I can measure. That results in a size of 87,000 light-years rather small compared to some other ellipticals in the cluster such as nearby M84, 86 and 87. Most sources say it is smaller than these giants so maybe I\'m seeing it all. Most sources say its long dimension is 5.4\' while I was measuring 6\'. So I may be overstating its size but really think that unlikely. Dang aurora anyway.

While listed in Messier\'s catalog, like many of \"his\" galaxies it was discovered by someone else. It was discovered by Johann Koehler on April 11, 1779. He also found M60 the same night. Messier found M59 4 days later. One night later (and before Messier) Barnabus Oriani in Italy also found M59. This likely was a confirmation of Koehler\'s discovery rather than an independent one. Quite a logjam of discovery.

More interesting are the two NGC galaxies at the top of the image. NGC 4606 is a strange galaxy. While NED classifies it as SB(s)a:; as does Seligman (NGC project says simply S...) I really can\'t see much of a bar nor spiral structure of any sort. It seems to be a mostly structureless blue disk galaxy with plumes. I suspect it is the result of a merger and may be transitioning to an elliptical though this is pure speculation on my part. I found nothing much other than comments about its lack of spiral structure. One note reads: \"NGC 4606 This galaxy shows little traces of spiral arms and has an intermediate bulge. NGC 4606 appears between S0/a and Sa. However, Gavazzi et al. (2000) fit a bulge to disk ratio of 1/20, suggesting a later type than Sa.\" It is both a Seyfert and LINER galaxy also indications of strong interaction in its recent past. There\'s a bright star cloud near the core. Could this be the remains of what it ate? I didn\'t find anything on it to help with this.

Redshift puts it some 90 million light-years distant which puts it outside the Virgo Cluster. Non-redshift measurements say 58 million light-years. I suspect that is closer to the correct distance. The Virgo cluster is famous for high velocity galaxies, some even have blue shifts that greatly distort distance estimates. This is likely one. Using the closer measurement I get a size of 65,000 light-years including plumes. Again, I suspect the full size has been lost to that aurora.

NGC 4607 is a rather normal looking edge on spiral with a very crooked dust lane. Not at all the neat straight dust lane of a classic edge on spiral like say NGC 861. I rather expected it to make the Flat Galaxy Catalog as it has no sign of a central bulge but apparently, its width to length dimensions were just under the cutoff. It did make the lesser requirements of the 2 micron flat galaxy catalog however as 2MFGC 09982. It too has a very different redshift from non-redshift measurement. In this case, it is coming toward us at high speed thus measures at only 12 million light-years while non-redshift measurements give a much more reasonable 63 million light-years. Using the further distance I get a size of 68,000 light-years. Note I\'m using the best luminance subframe as it shows the extent better than my fake background version. Classifying edge on galaxies seems a bit of a guess to me but NED and Seligman say SBb? while the NGC Project leaves off the question mark. How they tell it is a barred spiral I don\'t know. Maybe something to do with spectroscopic or radio details. I need educating on this subject.

There are three IC galaxies in the image. IC 809/3672 is by far the brightest. It is listed as a dwarf E1,N (Seligman says E0??) elliptical with a nucleus (that\'s the N) It too has two very different distance estimates. The non-redshift one of 51 million light-years the most likely one. Using that I get a size of 13,000 light-years. It was discovered by Lewis Swift on May 6, 1888. Later it was seen by Arnold Schwassmann on Sep 8, 1900. Apparently, Dreyer didn\'t realize they were the same galaxy and gave this later \"discover\" the 3672 entry. A note at NED says there is a very red globular cluster 2\" from the nucleus. I don\'t find it on my image nor the Sloan image. Note the asteroid I picked up traveling in front of its upper left corner.

More interesting looking is IC 3670, a wide open 2 arm spiral I wish was much closer than its 350 million light-year distance. I measure its size at about 76,000 light-years. Pretty typical for this type of spiral galaxy. I\'m puzzled by Seligman\'s entry for this. He shows it as E2?? rather than the spiral it so obviously is. NED is unusually silent. All I can think of is on the red POSS 1 plate the arms are very hard to detect. At first glance (maybe second even) it does look like an elliptical galaxy. But the arms show on the blue plate for both surveys. Assuming he didn\'t mix information from another galaxy (position is correct) it was discovered by Royal Frost on May 19, 1904. I don\'t think I\'ve covered him before. While an American astronomer who did work for a short while under Pickering at Harvard he did most of his work at Arequipa Observatory in Peru. He is credited with 454 IC objects and one asteroid.

The annotated image has two asteroids, one easy to see against the galaxy and the second, listed only 0.4 magnitudes fainter that barely registers. This is mostly due to my processing. Seen against the galaxy the two combine to be bright enough to get through but the other one suffered from my background substitution. 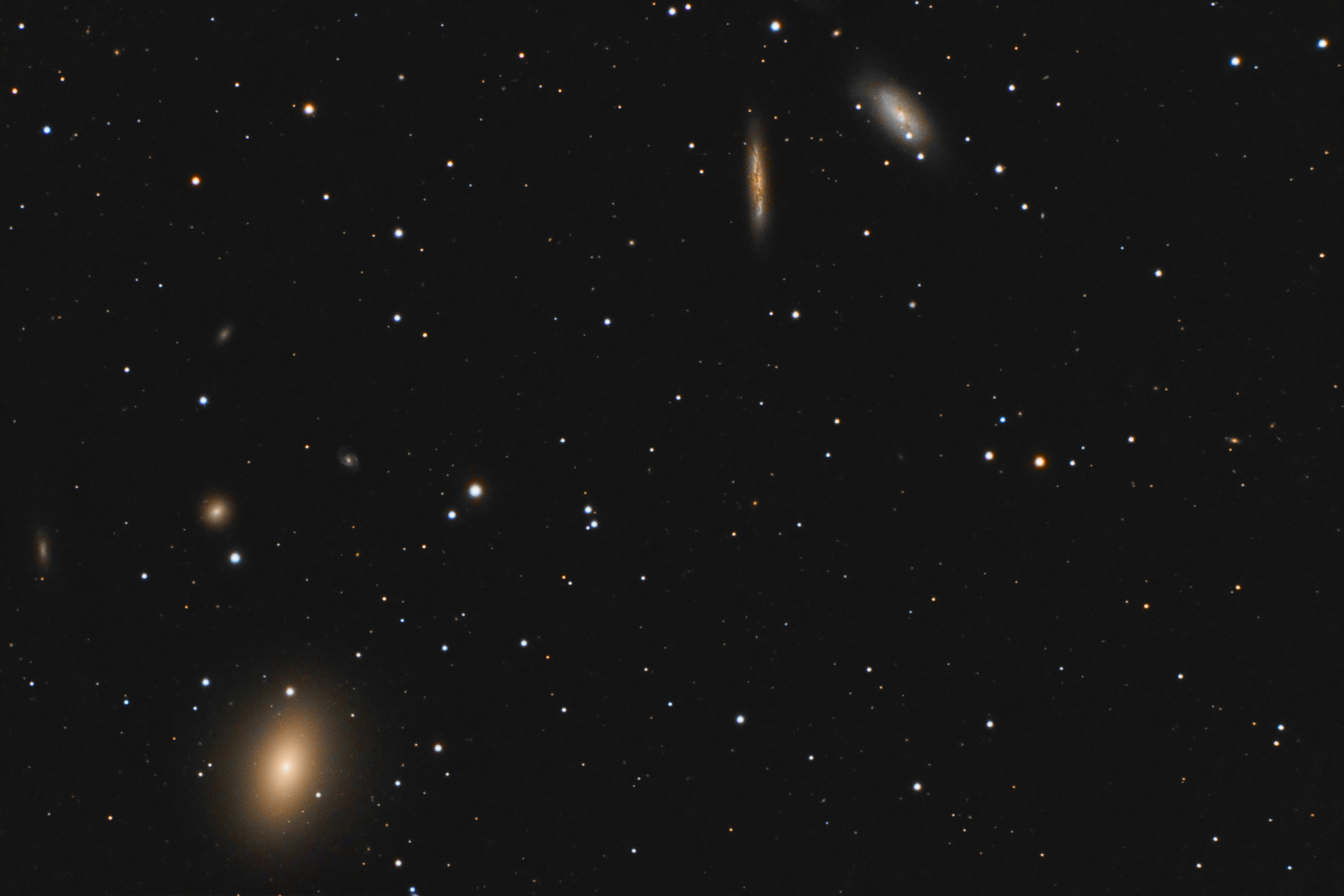 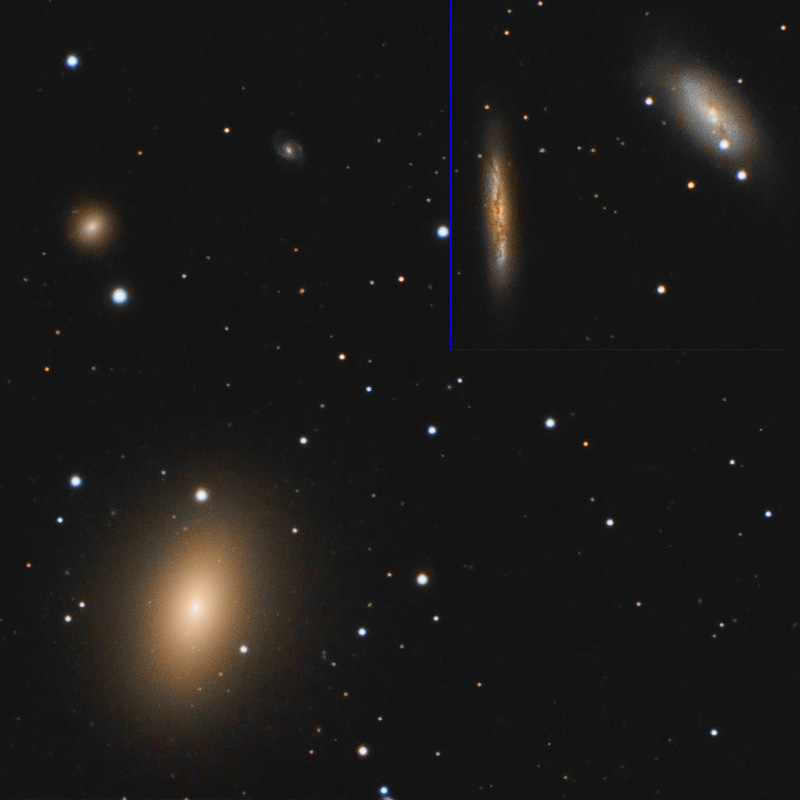 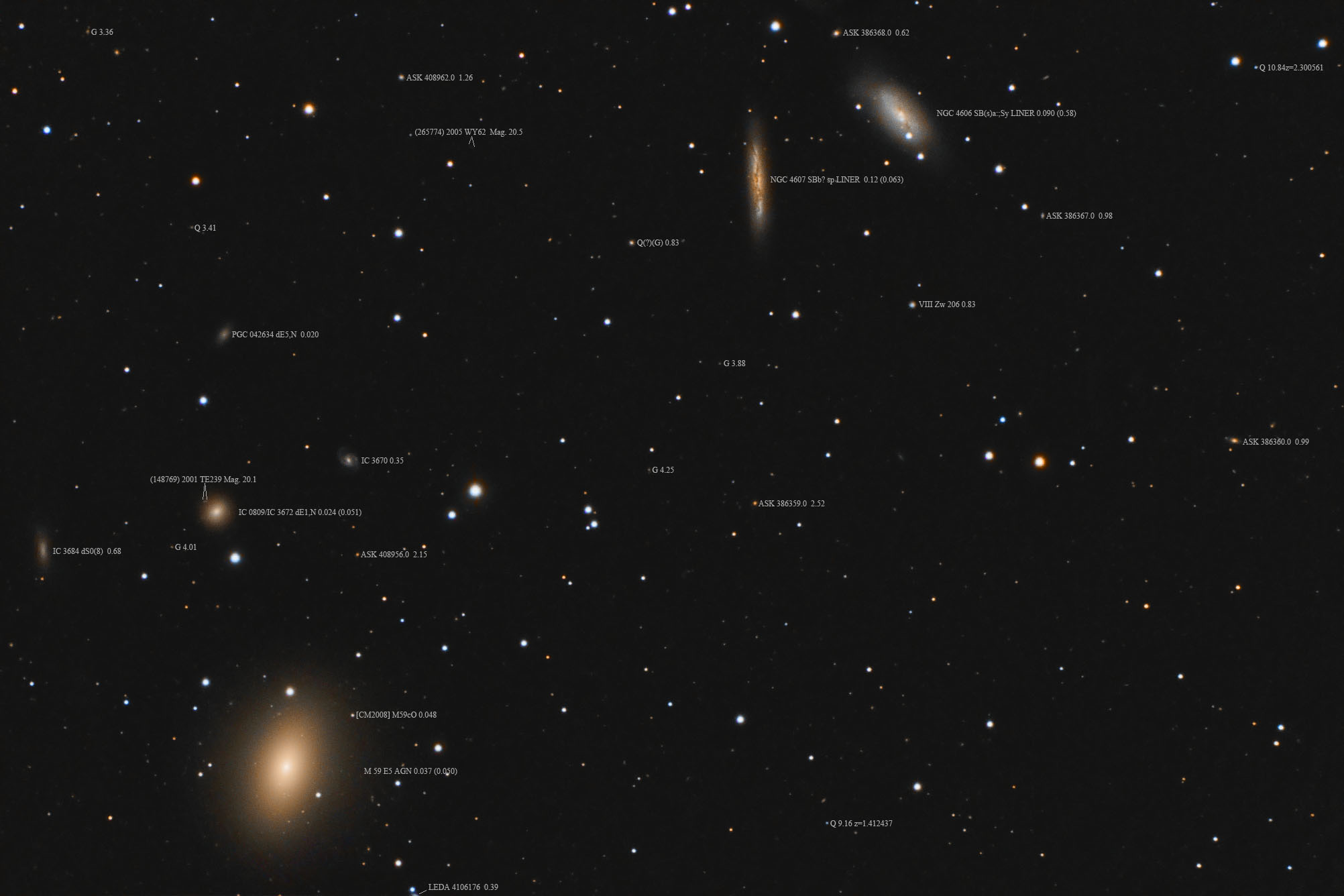