M81 is a famous spiral galaxy in Ursa major that anchors a group of galaxies. It is thought to be just under 12 million light-years distant. It was discovered several times. First by Johann Bode on December 31, 1774. Guess he wasn\'t out celebrating New Year\'s Eve. For this reason, it is often called Bode\'s Nebula (at the time galaxies weren\'t known but some incorrectly, in my opinion, call it Bode\'s Galaxy). Or maybe he wasn\'t the first. Sometime between 1772 and 1778 Johann Koehler found it but didn\'t record it until 1779 so most say he loses out to Bode. Then in August 1780 Pierre Mťchain discovered it. Messier observed and recorded it on February 9, 1781 likely having heard of it from Mťchain.

Several parallel dust lanes can be seen above the core of the galaxy straight down and to the right, not following the spiral of the galaxy in the slightest. Some sources say these are due to a close pass with M82. Others say these are due to dust in our own galaxy. I\'ve also seen about everything possible in between these two ideas. There\'s also another odd lane crossing these to the upper right of the core that is much more vertical and wider. It too doesn\'t fit the galaxy\'s structure nor can I fit it with the idea these are due to interaction with M81. For me, they are still unexplained. It is classified by NED as an SA(s)ab; LINER Sy1.8 galaxy. Using a simplified system the NGC Project says Sb I-II.

To the east is the irregular Magellanic dwarf galaxy Holmberg IX (PGC 28757). This is a very young galaxy with little hydrogen. Some think it was formed from gas and dust drawn out by the near collision of M81 and M82 in the past and therefore a very young galaxy. Star streams in deep photos show it as an enhancement in a long stream of stars all of which may be due to this interaction. Or not, depends on who you read. I tend to think there may be something to this idea.

Assuming a distance of 11.8 million light-years for both I get a size of 76,000 and 11,600 light-years respectively measuring their longest length. Holmberg IX is rather drawn out by tidal forces making its long dimension larger than it likely would otherwise be.

For information on the M81 galaxy group and a radio image showing the various streams of hydrogen gas see: http://messier.seds.org/more/m081gr.html Note the far left red spot is NGC 3077. Also, the text incorrectly identifies Holmberg IX as UGC 5423 rather than the correct 5336 shown in the table.

I took this image back in 2007 when my techniques were poor. As was my image processing abilities. I really need to reprocess this one as I doubt the color balance is all that great. Also while the label on the image says 60 minutes of luminance data I can only find 50 minutes worth. I have no idea which is right but will go with 50 as that\'s all I can find was taken. My notes also indicate the master luminance file contained 9 frames, not 10 or 12 to add to the confusion. I really didn\'t keep good notes back in 2007 it appears.

For more on this galaxy see: http://messier.seds.org/m/m081.html 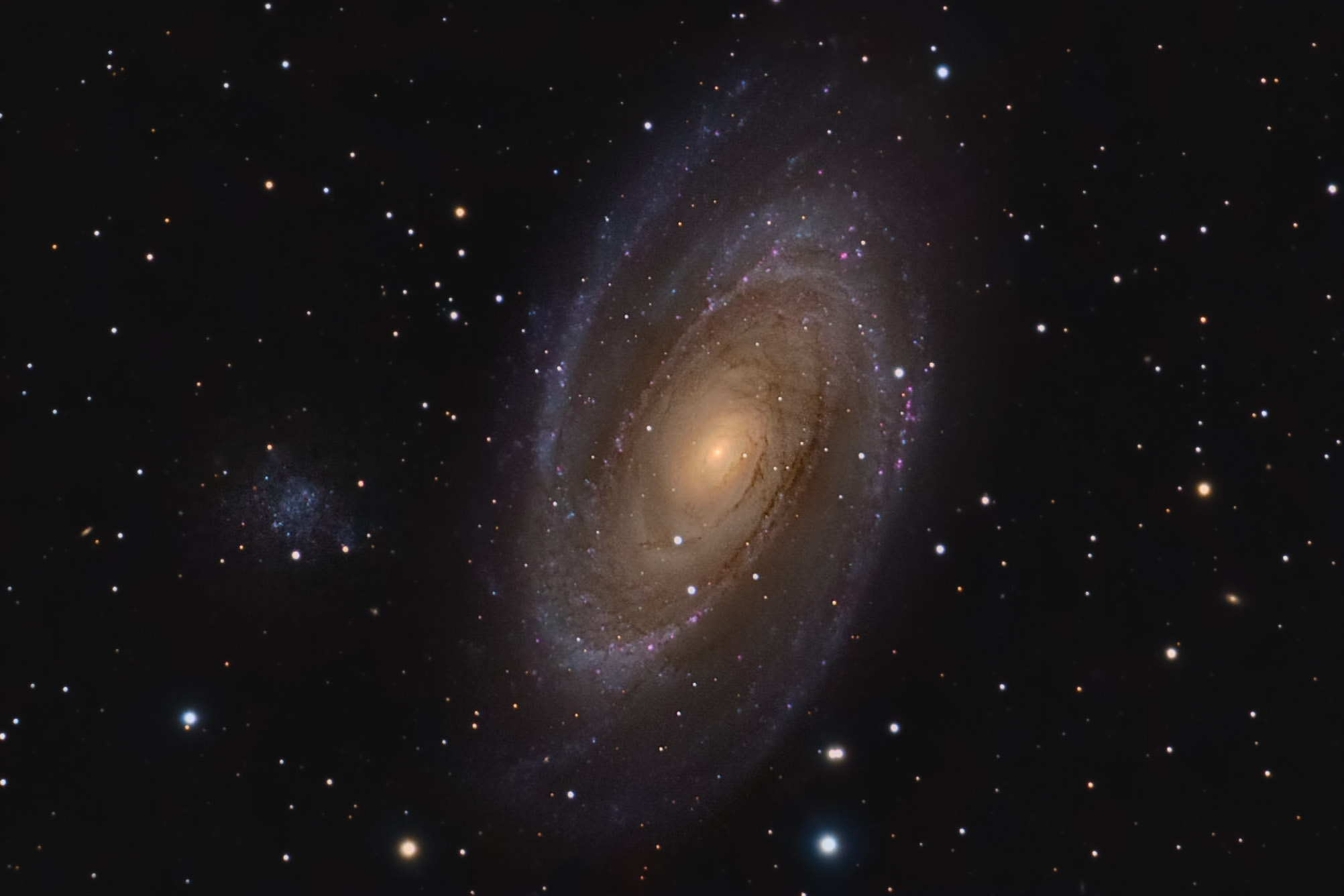