M85 is one of the large elliptical-like galaxies in the Virgo cluster. It is near the northern edge of the cluster in Coma Berenices. Being that the cluster is about 60 million light-years distant that is likely close to its true distance. Redshift puts it at 48 million light-years while various other methods give distances ranging from 28 to 95 million light-years. They average out to about 55 million light-years. Even though this is a much studied galaxy we still don\'t have a good grasp of its distance. Using the 60 million light-year figure the bright region of the galaxy is about 88 thousand light-years across with the outer halo extending about 170 thousand light years. NED classes it as SA(s)0+ pec while the NGC project says SA(s)+P. It is a shell galaxy indicating it has had a close interaction with other galaxies in the past, likely devouring a few smaller members of the cluster. While they aren\'t as distinct as they were in some other shell galaxies several shells and plumes are seen in my image.

NED lists quite a few globular star clusters around this galaxy. About half show in my image, about the same as show in the Sloan Survey image. I\'ve marked them on the annotated image with the notation CL. The label is a couple pixels to the right of the cluster unless that wasn\'t possible. Things got rather tight. When too tight I used a line to the cluster.

It\'s companion galaxy, NGC 4394, is likely a true companion though I doubt they are interacting. It is an interesting galaxy. NED classes it as (R)SB(r)b LINER indicating it has a somewhat actively feeding black hole at its core. It\'s a quite photogenic galaxy in its own right.

M85 has a third companion, MGC +03-32-028 seen against its southern shell. With a similar redshift, it would appear to be a true companion. Is it destined to be M85\'s next dinner? NED classes it as E?

There\'s only one other galaxy with redshift data in the image, IC 3292 and it too is likely a companion with a similar redshift. NED calls it a dwarf S0 galaxy.

To it\'s left (east) is a little trio of galaxies one of which is a nice ring galaxy, SDSS J122454.57+181200.8 with what is likely its core in the upper right part of the ring. Look closely and you will see a second galaxy just to the right of the likely core region. While both appear rather red in my image the Sloan image shows it as blue. Likely it has a lot of near ultraviolet light that Sloan can see but I can\'t that accounts for the color. It might be the \"bullet\" that created the ring and is now creating new stars thanks to the collision. NED lists it as SDSS J122454.40+181159.4. The starlike object just below these two is SDSS J122454.17+181152.6. All three fit in a 10\" of arc circle. Without redshift data, its difficult to say if they are related or a chance alignment but I like the idea, at least the first two may well be.

You may want to enlarge the image to see some of the details better. This was taken on a good night so can withstand some enlargement. 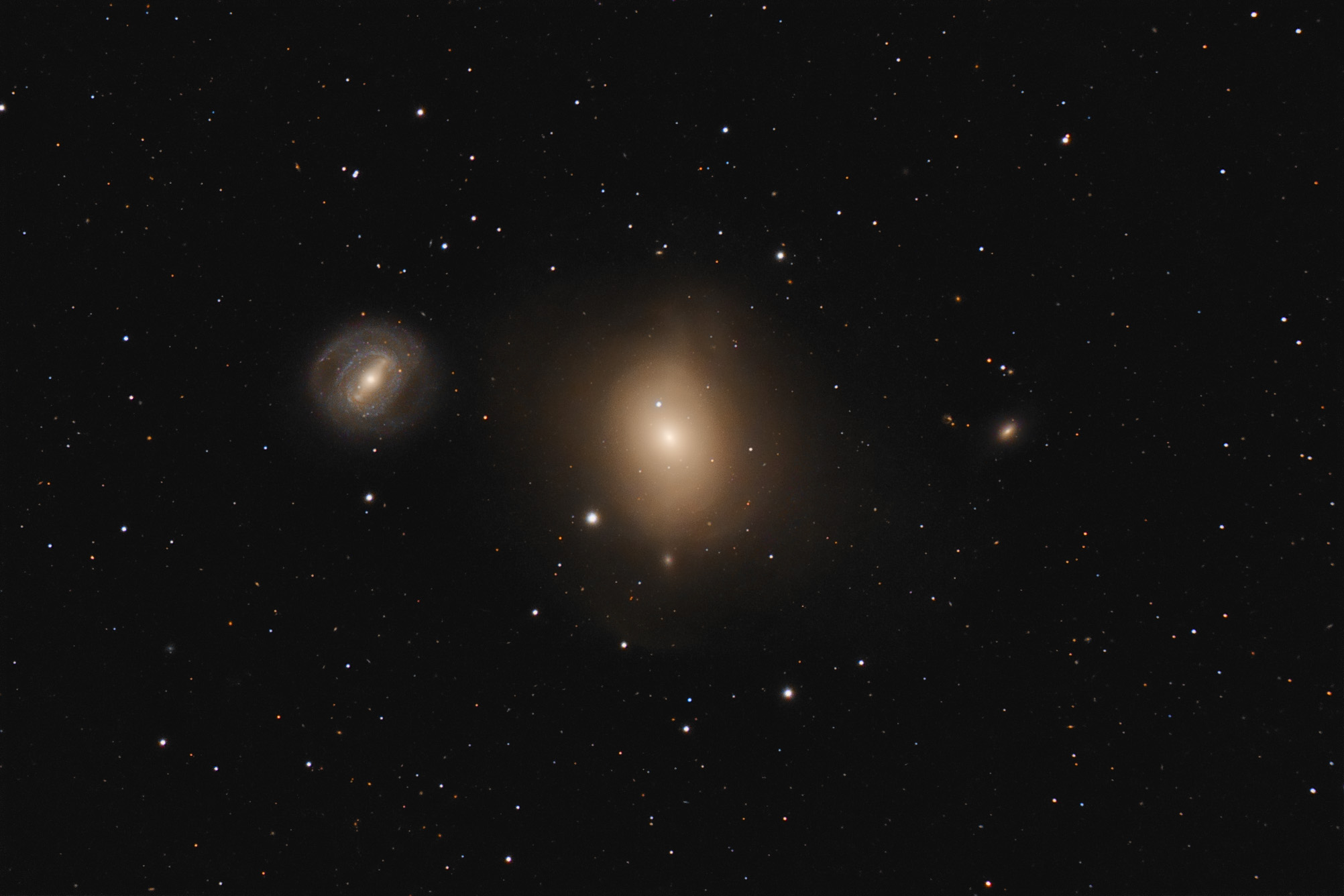 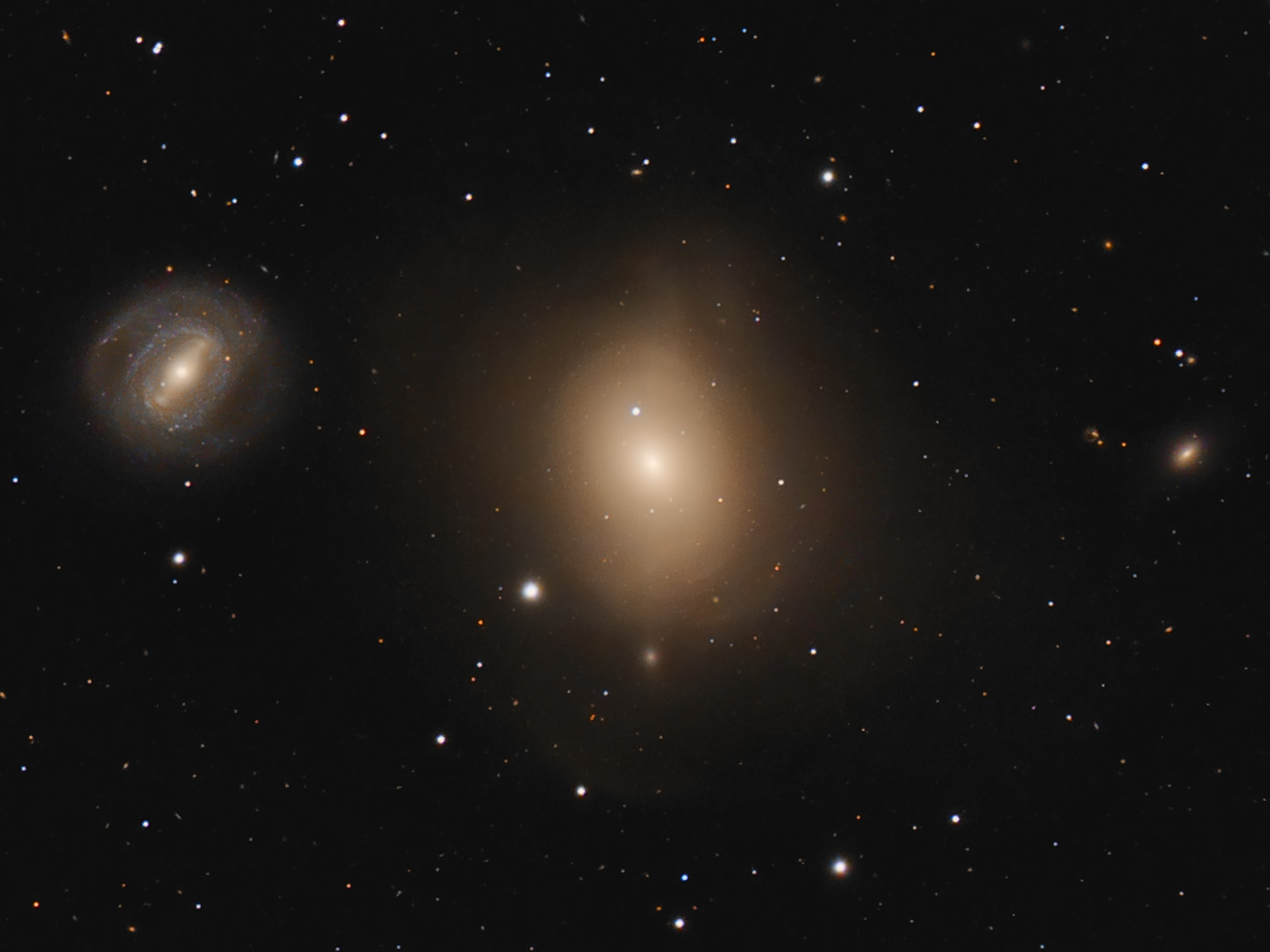 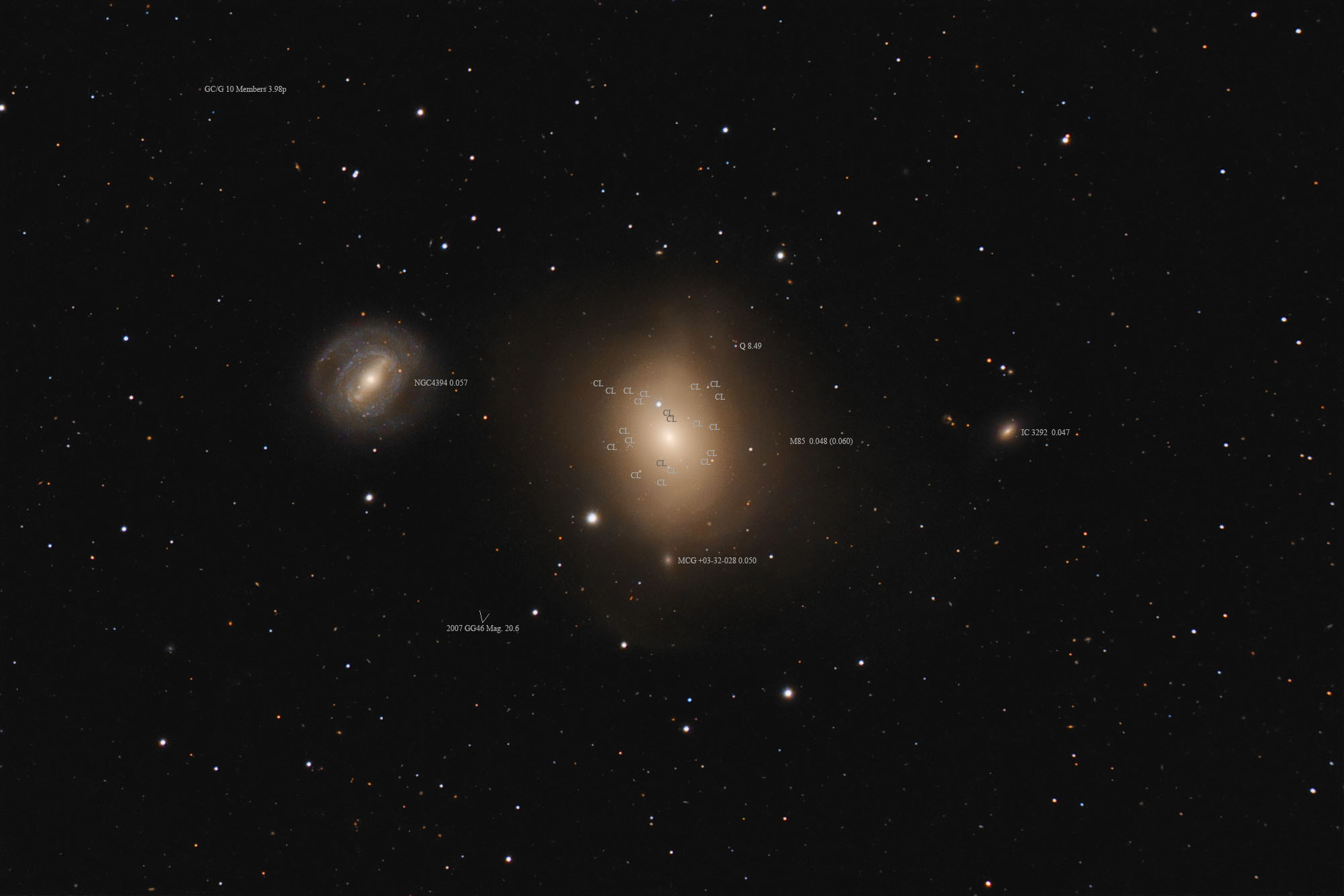