I finally had clear skies with M95 not too far from the meridian the early morning of April 17 UT (evening of the 16th for those in the Americas). M95 in Leo is a rather common target for small telescopes. I found two different estimates for the distance to M95. Most sources say 38 million light-years but others say 32.6 ± 1.4 million light-years. Wikipedia gives BOTH distances in the same article without realizing the discrepancy. By redshift alone, it is 50 million light-years distant but that has a very wide error bar that easily includes either shorter distances. I\'ll get back to M95 but first the supernova.

SN 2012aw is a type IIP supernova. The \"P\" stands for \"Plateau.\" The light curve has a plateau near maximum brightness. It fades only very slowly for a while before starting a normal, much faster brightness decline. This was fortunate for me as I was clouded out for weeks before getting clear skies in the early evening letting me get this image on April 17 UT. It was still at magnitude 13.0 by my rather crude measurement. Maximum was only slightly brighter so it was still in the plateau period when I took the image. Probably still is but the clouds returned so I can\'t verify this. A type II supernova is also called a core-collapse supernova. The massive star has converted hydrogen to helium then helium to carbon and oxygen. These are fused into other heavier elements such as neon, sodium, magnesium aluminum silicon sulfur as well as other elements. These, in turn, are fused to even heavier elements such as nickel which decays to iron. Iron can\' fuse so the core suddenly can\'t create the heat needed to support itself against gravity and collapses into degenerate matter but when that is above a limit, about 1.4 times the mass of the sun, even that can\'t stand the gravitational pressure and total collapse occurs. After this, things get really complicated. You can read about it at: http://en.wikipedia.org/wiki/Type_II_supernova#Core_collapse

While a search of old high-resolution images of the galaxy tried to find the star that exploded prior to the event, I\'ve not seen anyone reporting it has been found. So the idea it was a red giant, while likely the case, carries some risk of being wrong. Still, most are so the odds favor it.

M95 is a rather odd galaxy at its core. Instead of a steadily brightening core, there\'s a broken ring of star formation about 10 seconds of arc from the core. The core region appears darker due to obscuring by a heavy dust layer. I tried to process the core to bring out this ring. Two dark bands funnel dust and gas into this core region fueling the massive star formation going on there. The eastern dust lane breaks into two equal parts feeding each end of the largest star-forming arc. The single lane coming in from the other side seems to fuel the smaller arc. The supernova, however, is far removed from all this activity.

Not much of interest in the annotated image. Just two quasars and one appears to be more a galaxy than a quasar. My image shows some size to it so I\'m seeing a galaxy rather than a dominant quasar at its heart. It is only 2.7 billion light-years distant. To its northeast is a true quasar at 9.7 billion light-years. Between the two and below a bright orange star and just above a white star is a tight group of 7 galaxies. This is SDSSCGB 10567 a listed galaxy group of 7 members but no redshift data is available for it unfortunately so I didn\'t mark it. It is quite obvious in the image, however. 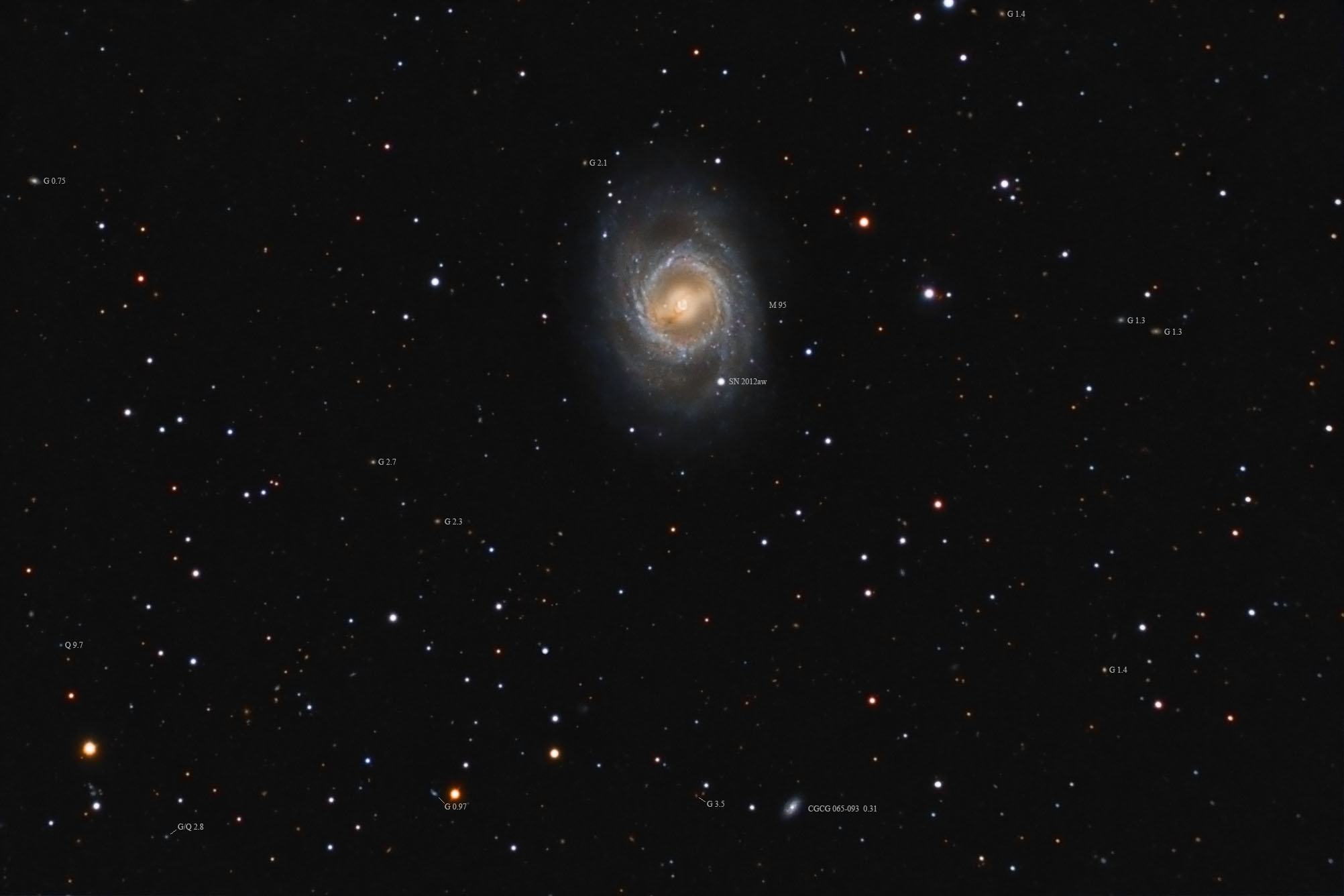 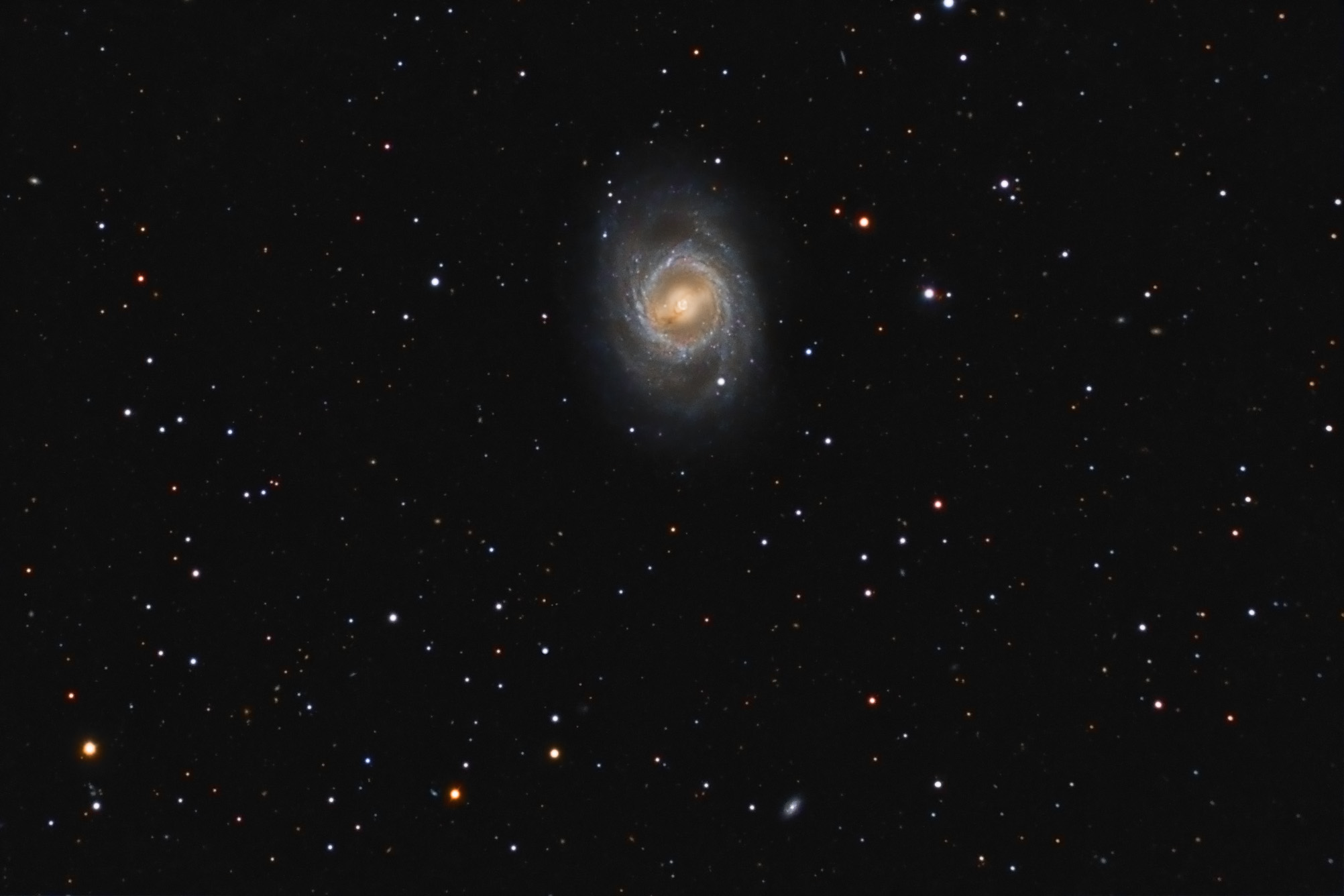