M104 is commonly known as the Sombrero Galaxy. This galaxy is way too far south for me to image well. Unfortunately, the weather cleared suddenly before the scope had time to cool I started the image. I had to catch it before it went into my Meridian Tree as when it would come out 90 minutes later it would be partly behind the observatory wall. Tube currents from not letting the scope cool for an hour resulted in flat bottomed stars. Also, due to the time constraint of the Meridian Tree, I was limited to only 40 minutes of luminance data which limited how much of its outer halo I could pick up. I\'ve processed it both to show the galaxy normally and then again with a strong stretch to bring out as much of the large halo as possible with my limited exposure time.

M104 is a very strange spiral galaxy. Spirals are composed of two classes of stars. Population I stars make up the disk of the galaxy, home to the spiral arms. The disk is made up mostly of dim stars like the sun and dimmer but these can\'t be seen easily. The disk also contains the super hot, short lived blue stars. Since these are thousands of times brighter than sun-like stars they dominate the show and we see them as blue spiral arms. The core of the galaxy is made up almost entirely of very old dim stars but they are clustered much closer together than stars in the disk and there are far more of them so we do see their light as brighter than the disk. Since only yellow to red stars live long enough to dominate in the core we see it as a golden to orange color. These old stars are called population II stars. They also occupy a third region, the halo. All spiral galaxies have a spherical halo of population II stars. They are so thinly spread however they don\'t normally show up in photos. But a very few spiral galaxies have dense halos. No one has given a definitive answer as to why. It may have to do with how they cannibalized other galaxies. In any case, M104 is one of these large halo spirals. In fact, it has a huge halo. In my photo, it can be seen to extend beyond the spiral arms of the galaxy.

Seen only a few degrees from edge on, M104 has a thick dust lane yet little in the way of blue stars in its disk. The disk, while not golden sure isn\'t blue either. This indicates little star formation has gone on for a billion years or so in its arms, which are tightly wound. It is thought that a spiral will turn into a giant elliptical galaxy if it cannibalizes enough other galaxies. It could be that M104 is in a transition stage between being a young vibrant spiral to being an old elliptical. Though they do usually have some star formation near the core. It appears that may be the case for M104 as well. I first processed the image to show the disk and core but suppressed the halo. I then reprocessed it as best I could with the tools I had at the time to bring out the halo. Due to conditions and the time constraint I was under after the sky cleared, I couldn\'t pick up its full extent.

M104 was discovered by Pierre Mťchain on May 11, 1781 but according to Seligman it was noted by Messier but not added to his Catalog. Others added it to his list later. William Herschel recorded it on May 9, 1784 causing it to be entered in the NGC as NGC 4594. It is in the original H400 observing program. My entry for April 23, 1985 on a fair but somewhat moonlit night using my 10\" f/r5 at up to 150x reads: \"Large, edge on galaxy with an easy dust lane and enormous central bulge. An old favorite but the night is getting foggy so low and it is getting clobbered good!\" 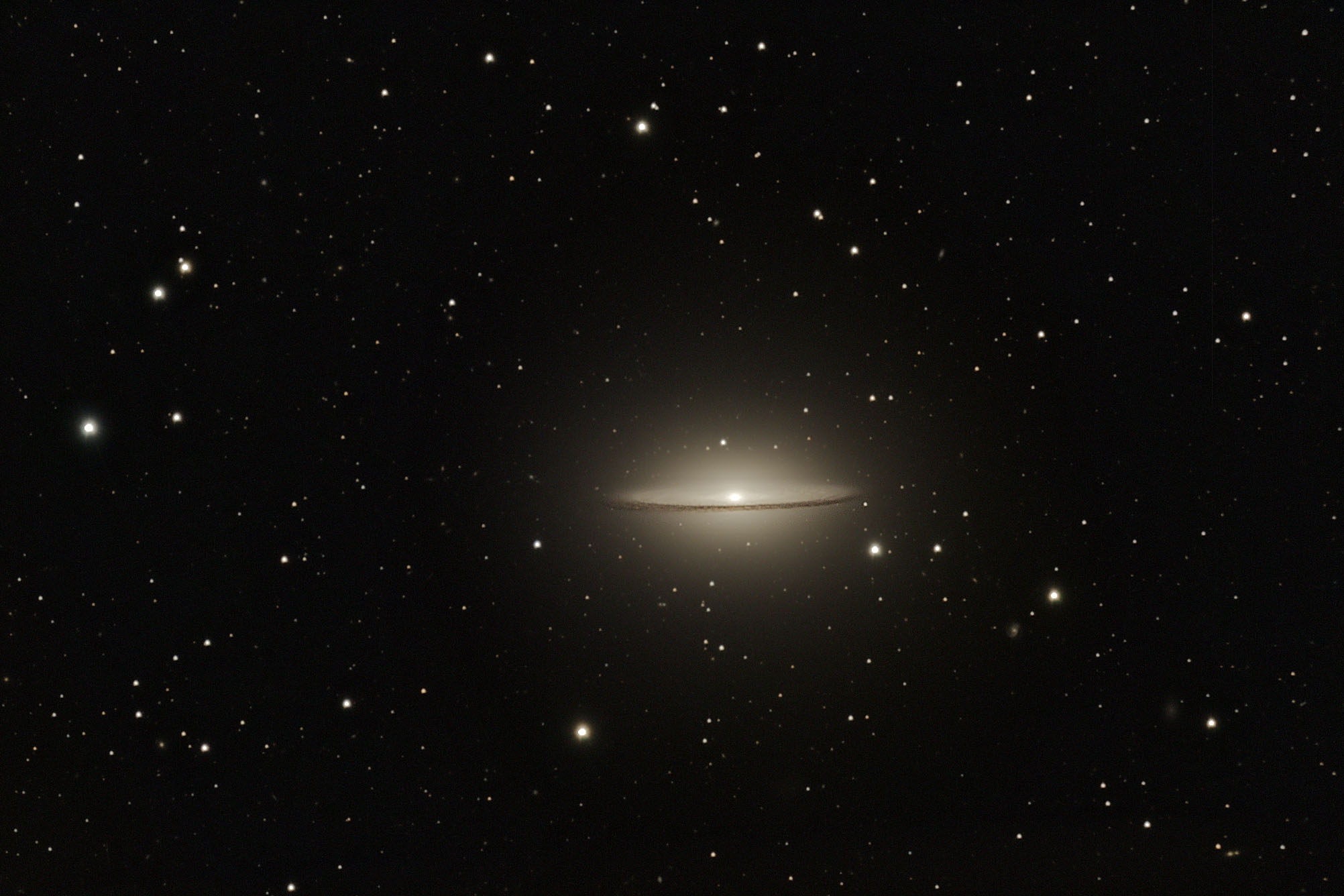 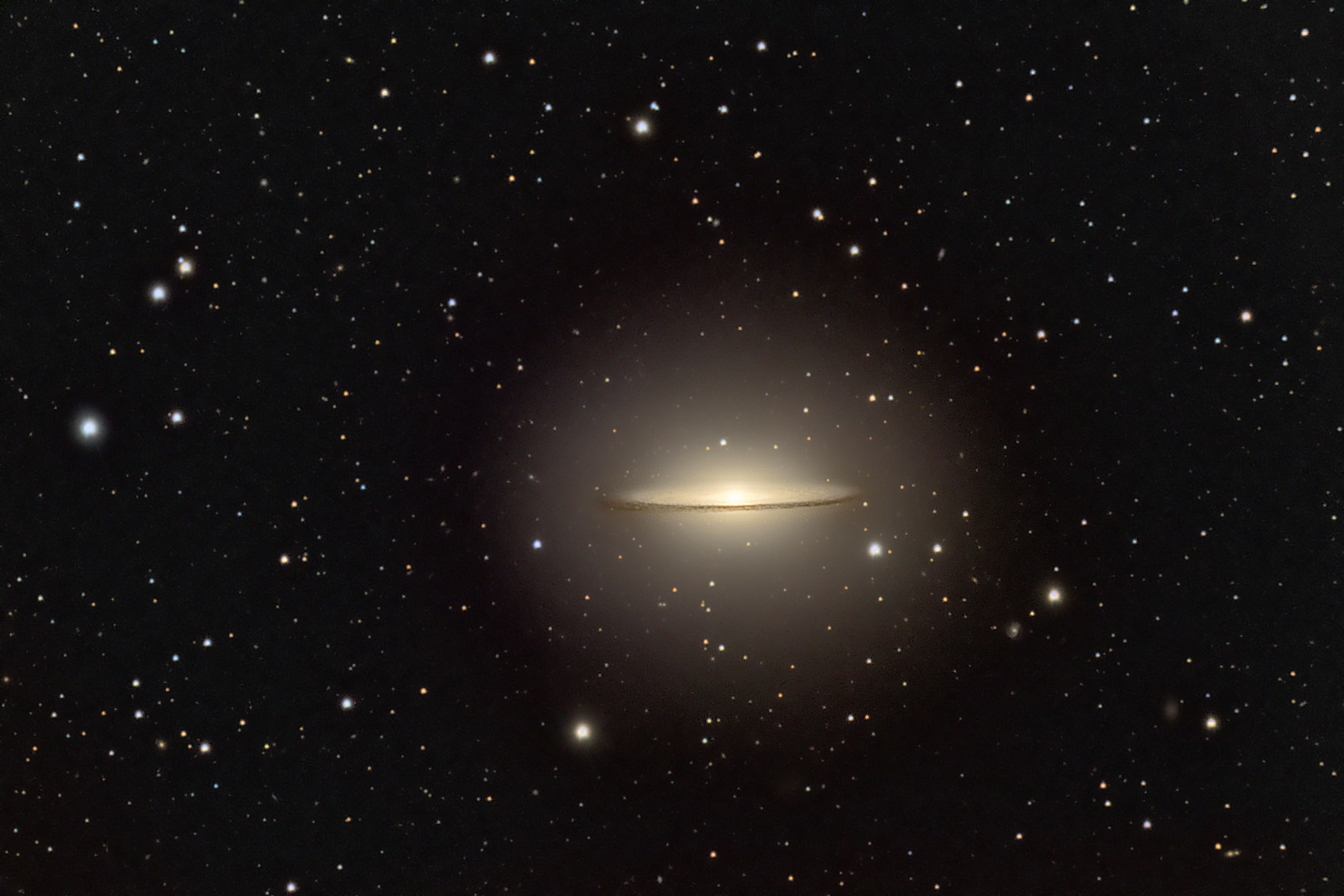