NGC 95 is a very peculiar galaxy in Pisces some 230 million light-years distant by redshift. Tully-Fisher estimates put it close at 190 million light-years using the mean value but they range from 170 to 230 million light-years. The galaxy has a very triangular shape with plumes to the east and west. My wife says it looks like it was flattened by someone stepping on it and spilling guts to the side. Something seems to have disturbed it but I doubt it was a big foot. The arm structure is very odd. It has mostly short faint arm segments coming from a very bright core that run rather directly to the edge which is ringed in HII star-forming regions. One arm coming around the west (right) side is stronger and rather red. As it reaches the edge it appears to turn blue and looping back along the edge until it meets another arm on the northeast which carries the illusion of a loop back to the core. Rather than being real, I think this an illusion due to the location of the HII regions but they could indicate something odd going on. The shape and plumes would indicate interaction with something, possibly something it is digesting. NED, The NGC project and Seligman all classify it as SAB(rs)c pec. Though Seligman adds a question mark after the \"c\". It was discovered by William Herschel on October 18, 1784. It isn\'t listed in either of the Herschel 400 observing programs. I measure its size at 120,000 light-years though Seligman says 125,000 but they put it slightly more distant (250 million light-years) which accounts for the size difference.

The only other galaxy with redshift data in the field is the flat galaxy FGC 036. It has virtually the same redshift as NGC 95 putting it at 230 million light-years though Tully Fisher measurements say 250 million. Since it is about half the angular size of NGC 95 it is half its size or about 60,000 light-years. NED says it is classified as an Sd galaxy.

One faint asteroid appears in the image halfway between NGC 95 and the lower right corner. It is (255371) 2005 WW111. It is estimated by the Minor Planet Center at magnitude 19.4 but appears much fainter in my image. This is likely due to the poor transparency and high sky brightness due to aurora the night I took this data. Due to the poor conditions, I tried another night but while transparency was better seeing was far worse so I went back and used the first night\'s data. There\'s a second 20.5 magnitude asteroid in the image but it is so faint it didn\'t survive my processing. I probably should have tried yet again but never did. The aurora played havoc with my color balance. I hope I compensated. I think it fairly close at least. 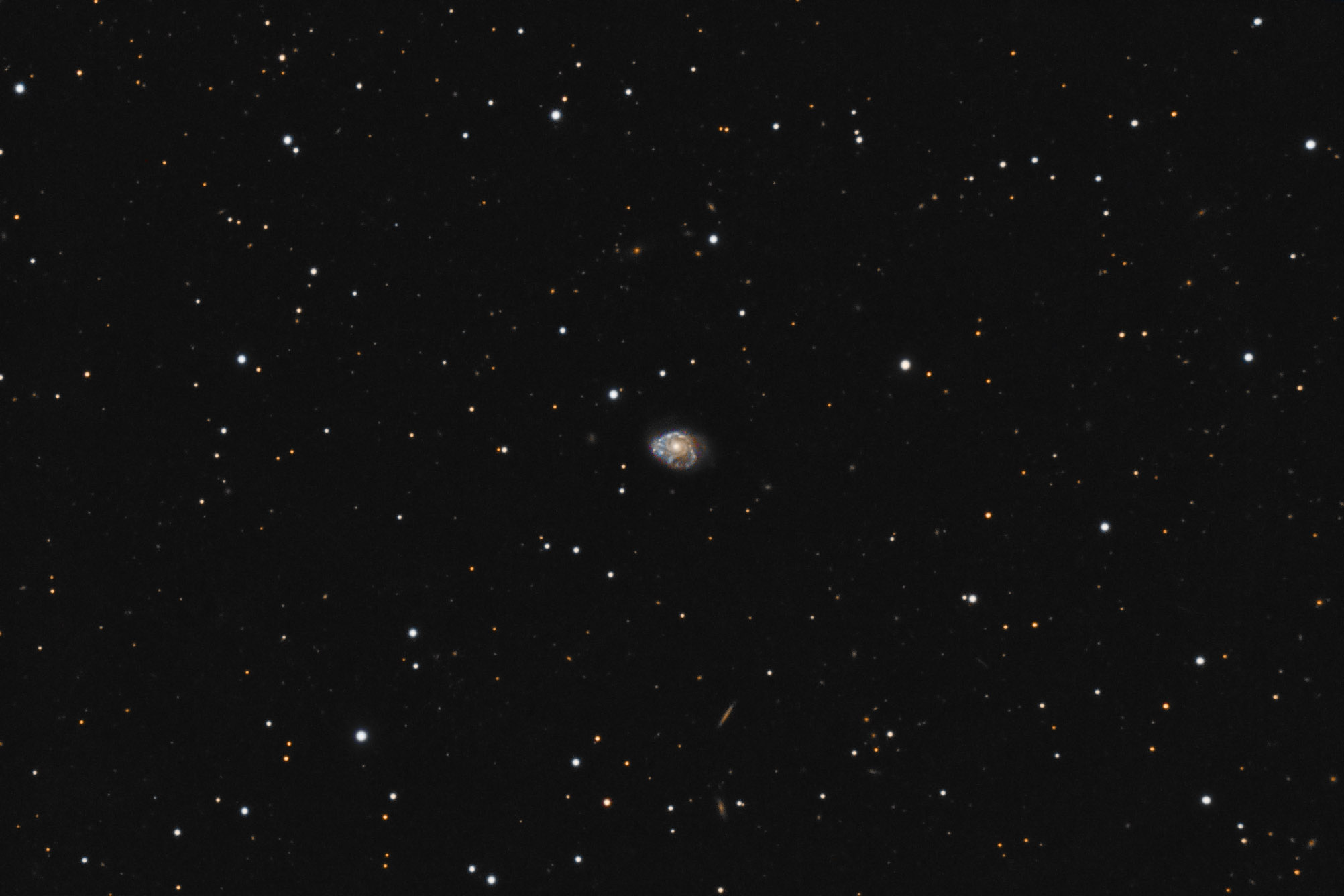 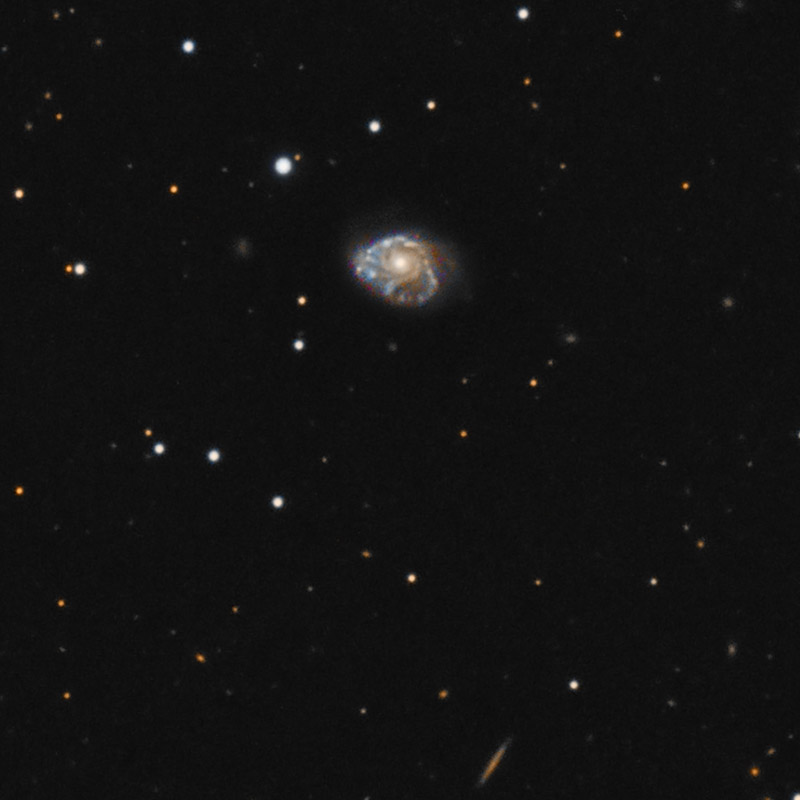 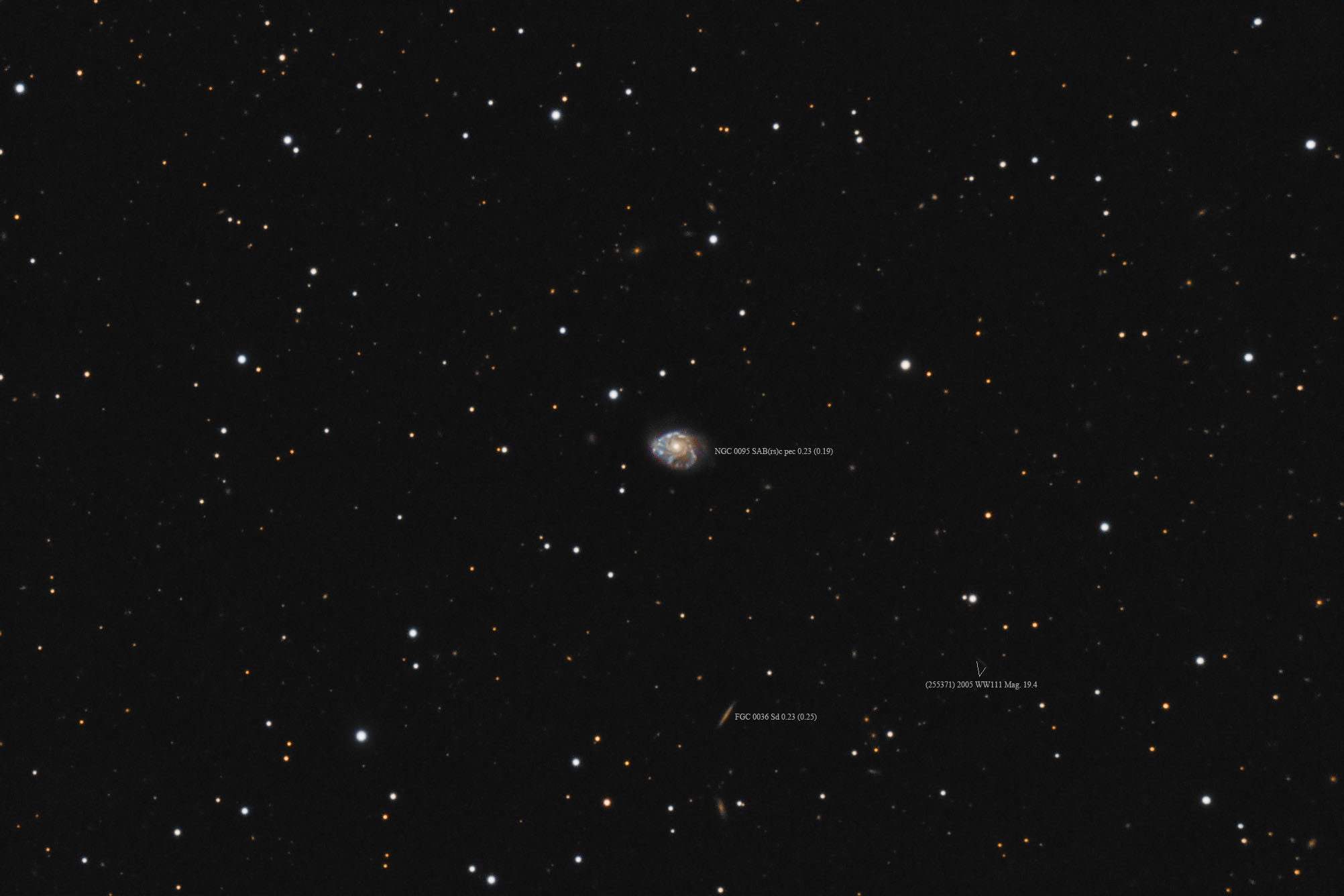