The core galaxy appears to be the very strange edge on galaxy NGC 128 at about 180 million light-years by redshift. Its disk is rather warped and apparently covered by a dust band from nearby NGC 127. Its core region is very odd with a box-like structure with severe points at the corners. Many papers refer to the nucleus being peanut shaped. I guess this is the odd \"X\" shape. I sure don\'t see a peanut in any image including those in the papers. Most attribute this shape to perturbations caused by the two companions. Though the much smaller companions don\'t seem nearly as distorted. To distort the more massive core region with such small galaxies without tearing them to pieces seems rather hard to explain. I suspect the core is more likely due to a merger. Many years ago (like about 1985) I played with galaxy collision models by computer. Took days to run a simple simulation. Several times when a small galaxy was eaten by a tightly wound spiral I ended up with something seen edge on that looked like this, complete with warped disk and no other companions needed. Today simulations that include dust and gas (not possible with the computing power I had available) show they can be ejected leaving a dead, often elliptical galaxy. I have to wonder if that isn\'t what\'s going on here and the two companions are latecomers to the scene. It is classed as S0 pec by NED which seems reasonable.

To the west is NGC 127 at a redshift indicated distance of 170 million light-years. It appears to be interacting with NGC 128 but I can\'t see that as sufficient to cause NGC 128\'s odd core. Wish I could come back in a few million years to see what happens. NGC 127 is classed by NED as SA0^0^: by NED and SA0°by the NGC project.

On the eastern side of NGC 128 is NGC 130. It doesn\'t appear to be interacting so is likely at a somewhat different distance. Redshift would put it a bit behind NGC 128 but I doubt you can read it that accurately to know for sure. It shows no sign of distortion. The only one of the 5 NGC galaxies in the image to be \"normal\" looking. NED and the NGC project class it as SA0-:.

Southwest of NGC 128 is NGC 126. NED\'s classification is SB0^0^? while the NGC project says SB0°?. Except for the north and south side arms being unequal, it is rather normal looking.

Furthest west is the face on galaxy NGC 125. It has obviously interacted with some galaxy in the past; possibly NGC 128. It certainly has the mass to have inflicted damage on it and has plumes to indicate something major happened. Also, the core is \"sloshed\", meaning it is well off center. This can be caused by tidal forces some papers say. There\'s a broad plume on the south side partly hidden behind rather bright field stars in our galaxy. It has a talon-like claw coming out the west side. While faint it sure looks nasty! The NGC Project calls it (R)SA0+P: and NED says (R)SA0+ pec:. So they agree on this one.

Other group members that can be identified by redshift is MCG +00-02-045. It is also cataloged as 2MFGC 00328, a flat galaxy catalog of 2MASS IR galaxies. It isn\'t flat enough for the true flat galaxy catalog, however. NED says it is a Sbc: edge on galaxy. There are many other possible group members in the image but without any redshift data, it\'s impossible to know for sure. Some may be dwarfs closers than the group or large than average galaxies further away than the group. For those that seemed possible and were identified I labeled them with their catalog name, almost are from the 2MASS IR survey or from the British anonymous galaxy plate survey.

Many others are not listed in NED at all and are just noted with a question mark when they were either more interesting or brighter than many of the identified galaxies.

There are 6 asteroids in the image. They are listed by name and magnitude estimate by the Minor Planet Center on the annotated image. That saves me going over them here.

I\'ve included an HST image of the core region of NGC 128 though it shows little detail. While it was labeled as color it appears to be a grayscale image. 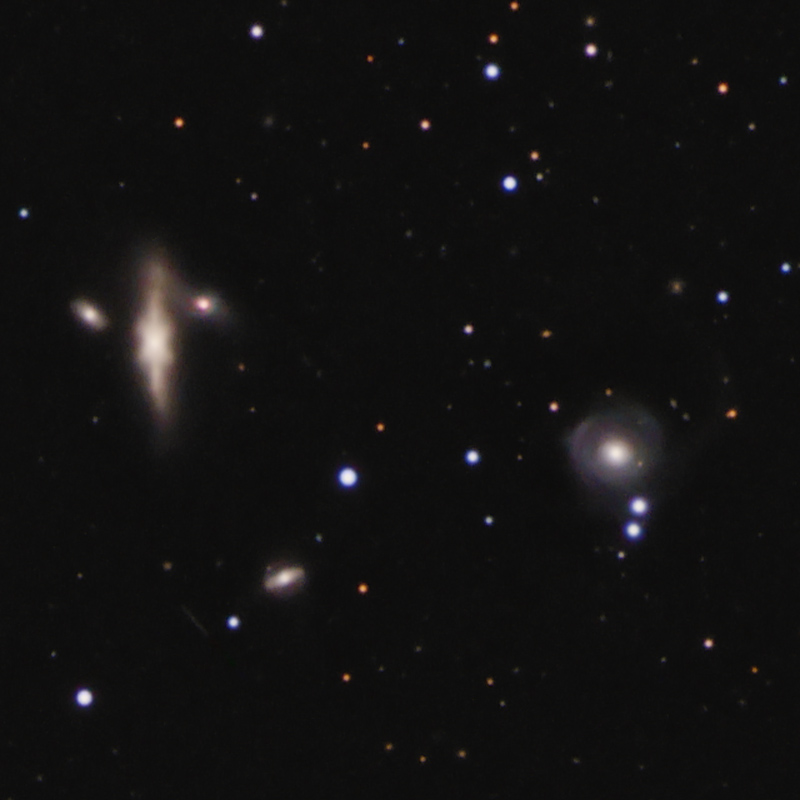 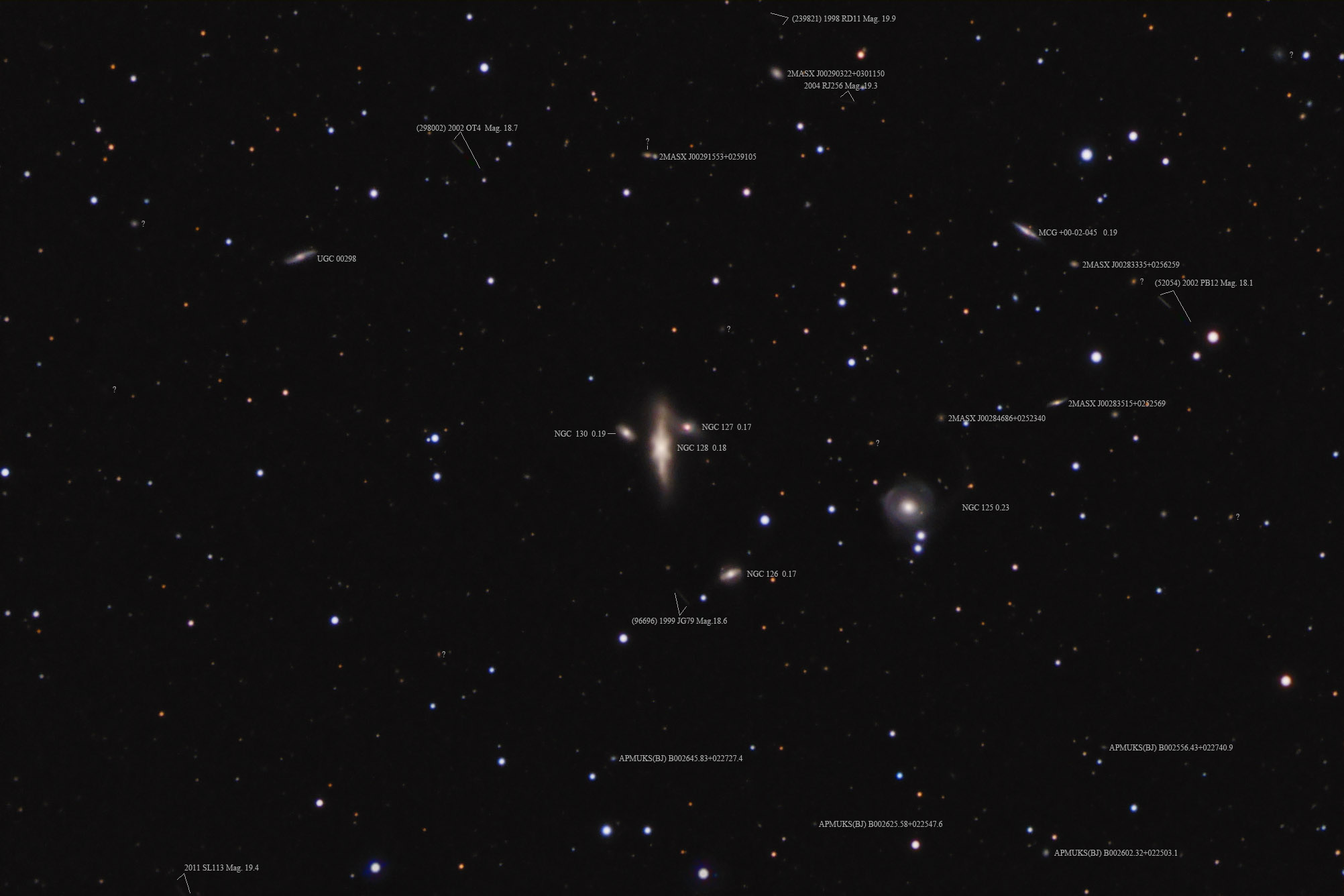 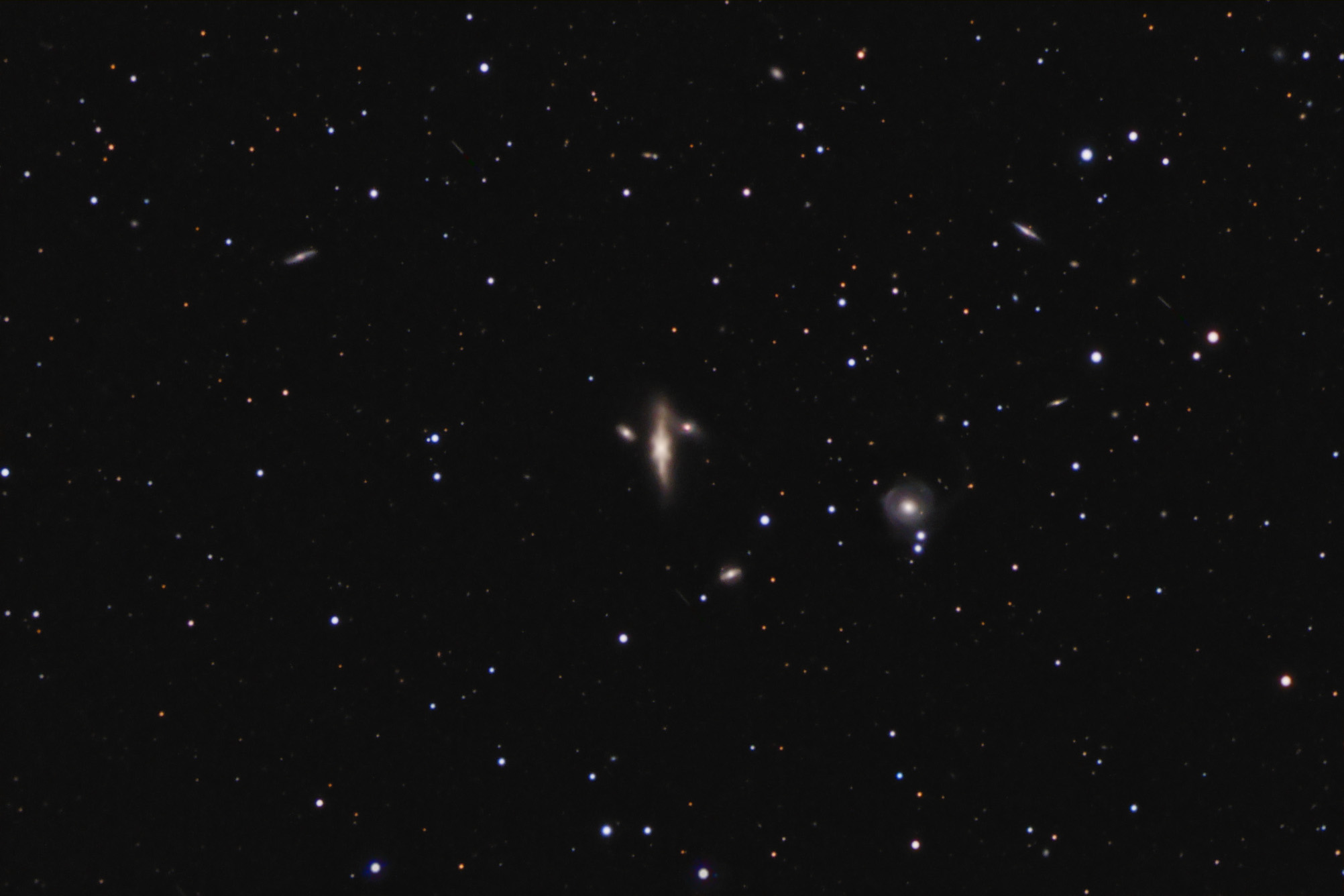