NGC 206 is a large star cloud in M31 much like the much smaller M24 in our galaxy. Some time ago I did a high resolution image of C179, a much smaller star cluster with nebulosity. I got a lot of comments asking why I went with something no one had heard of when NGC 206 was there. The obvious answer is I prefer imaging what hasn\'t been a popular target for imagers and \"everyone\" does NGC 206. But then I was asked to do one for a possible publication so put it on the list. A year went by before seeing was decent enough. By then I was likely too late for the project that put it on the list. 2012 was a lousy year for imaging. I\'d get one night where seeing was good for 10 minutes but not the 20 I want as a minimum for 0.5\" reproduction. Over 5 months (August through December) I managed 8 10 minute frames with sufficient resolution for the luminance data. Color was another problem as transparency was hit and miss playing havoc with all my color data for 2012 and so far in 2013. I wanted 0.5\" color data as well but that does need 40 minute subs for decent use and seeing for even 20 wasn\'t happening. I gave up and finally got 2 10 minute frames of each color under rather similar transparency. This image is the result of those 5 months of work on one object. While transparency wasn\'t as good as it was for C179 that cluster is visible to the upper left of NGG 206. It is bathed in H alpha pink.

Also note there are several distant galaxies visible through the disk of M31. The most obvious below NGC 206 and very slightly to the right. Other fuzz balls can be seen in the image that are also likely galaxies as they are not listed among the star clusters of M31. Nor does NED pick them up at all. Also there are other very blue star clouds to be seen as you scan around the image. Most toward the far right of my image. It feels rather odd to be scanning an image 4008 pixels across and stay within a small region of M31. When I got into DSO imaging nearly 60 years ago now (1956) I never dreamed I\'d ever take an image at this image scale. I was happy to see NGC 206 as an unresolved blob in M31.

One thing I learned is that NGC 206 is home to several Cepheid and eclipsing binary stars. The DIRECT Project http://www.astronomy.ohio-state.edu/~kstanek/CfA/DIRECT/ has used these stars to determine the distance to the star cloud and a lot more in the galaxy and thus M31. I found nothing at the site saying what distance they found. APOD says they found a distance of 3 million light-years http://apod.nasa.gov/apod/ap990402.html which is further than most estimates I\'ve seen. Original Hipparcos data said 2.7 million light-years which seemed to get reduced to 2.5 million or increased to 2.9 million light-years for reasons I never did discover. Now, this figure of 3 million light-years caught me by surprise. If right maybe we have another billion years before we collide with it.

NGC 206 was discovered by William Herschel on October 17, 1786. It is in the second Herschel 400 observe program as a \"Bright Nebula\" rather than a star cloud or star cluster. 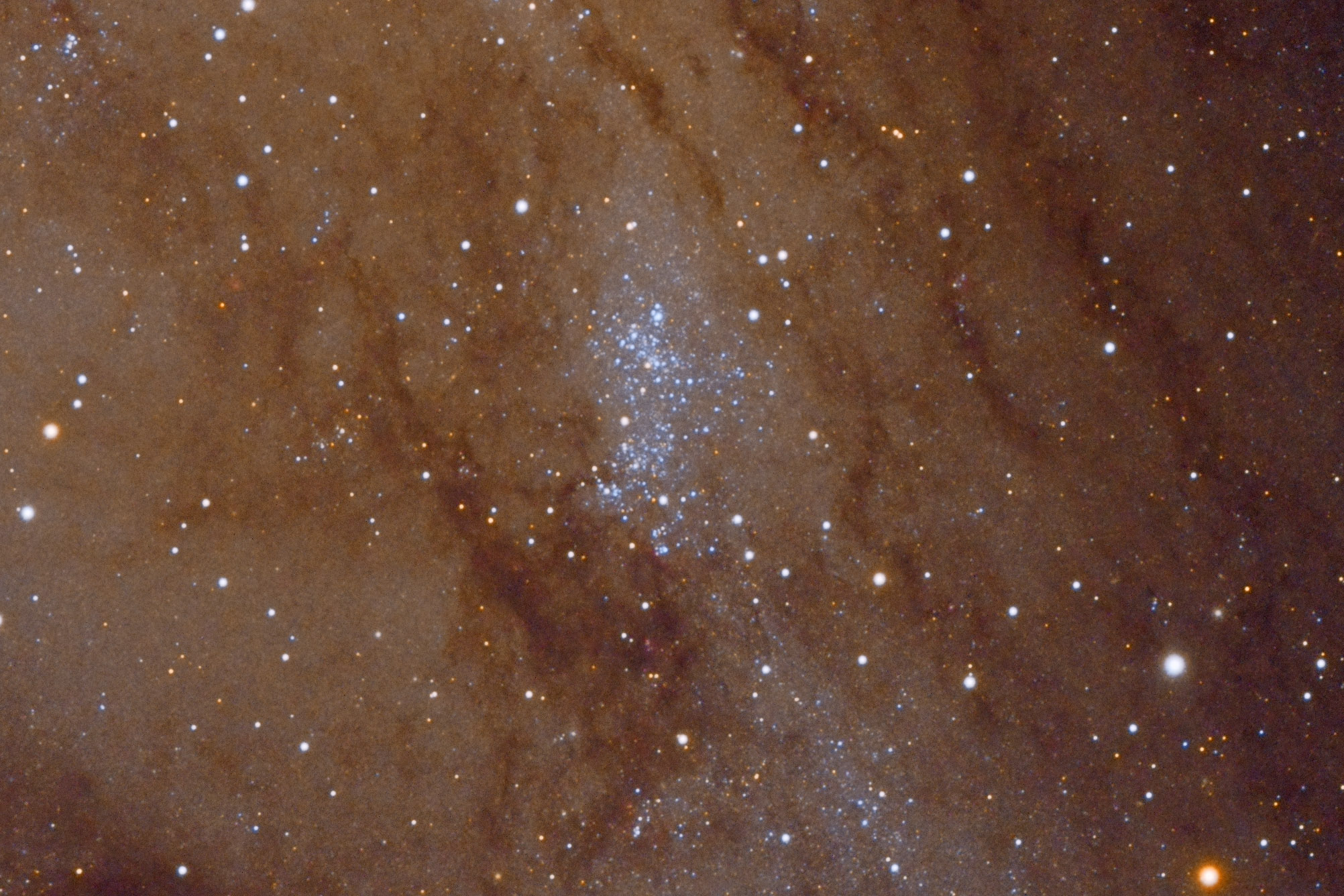 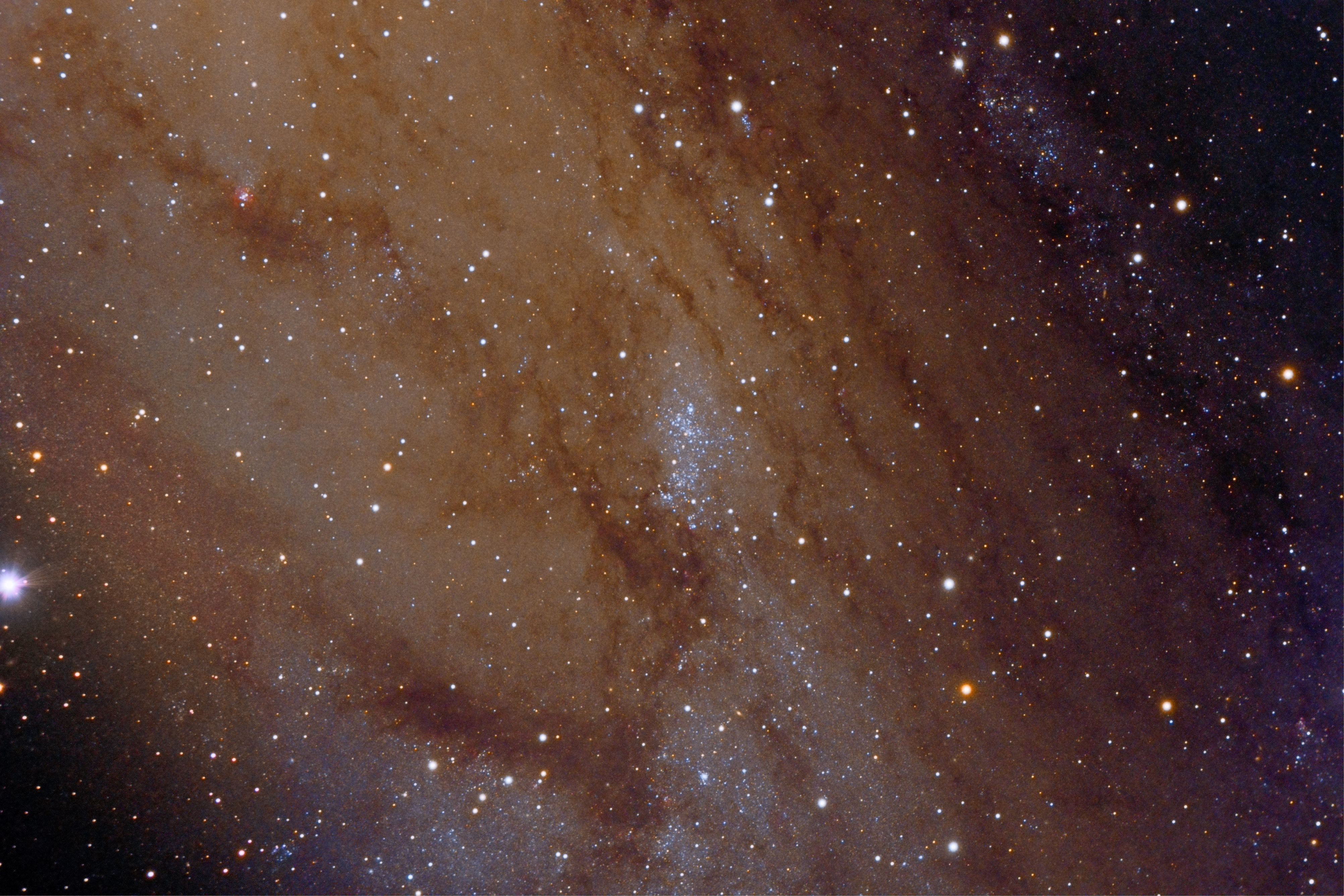