NGC 246 (Caldwell 56), The Skull Nebula, is a large planetary nebula some 1600 light years away. It is one of the big ones, being over 2 light-years across. Making this one difficult for me is its rather low declination. All winter low in the sky has been very obscured by fog over the lake at night. That not only dims the image something awful, it also makes the seeing very poor so the image is fuzzy. This time it was so bad I have cut it to half size. Note the stars are really muted by the fog as well. Normally I\'d not even run an image this poor but it\'s typical of what the sky has given me all winter. I did kill many dozen objects even worse than this due to conditions.

It was discovered by William Herschel on November 27, 1785. It is in the original Herschel 400 observing program. My note from September 10, 1985 at 60 power under fair but humid skies with my 10\" f/5 reads; \"Large, somewhat oval, planetary nebula, Easy with a UHC filter but difficult otherwise. Looks almost like a poor star cluster (only 4 stars seen) with involved nebulosity but UHC brings out its true nature. Two of the stars are within it while the other two were on its edge.

For a far clearer but false color image of it see the shot taken by Gemini South, one of the worlds largest observatory telescopes with a mirror 27 feet across compared to mine at 1.17 feet across. It collects over 500 times as much light as I can but cost about 5000 times as much. Its optical system was the responsibility of one of our astronomy club\'s early members, Larry Stepp, so many of us feel some connection to this pair of telescopes (Gemini North in Hawaii and Gemini South in Chili)
http://apod.nasa.gov/apod/ap060418.html

This was one of my very first images taken back when I had some very wrong ideas about how to take the images nor did I know how to process my data. Thus, while conditions hurt it so did my ignorance. 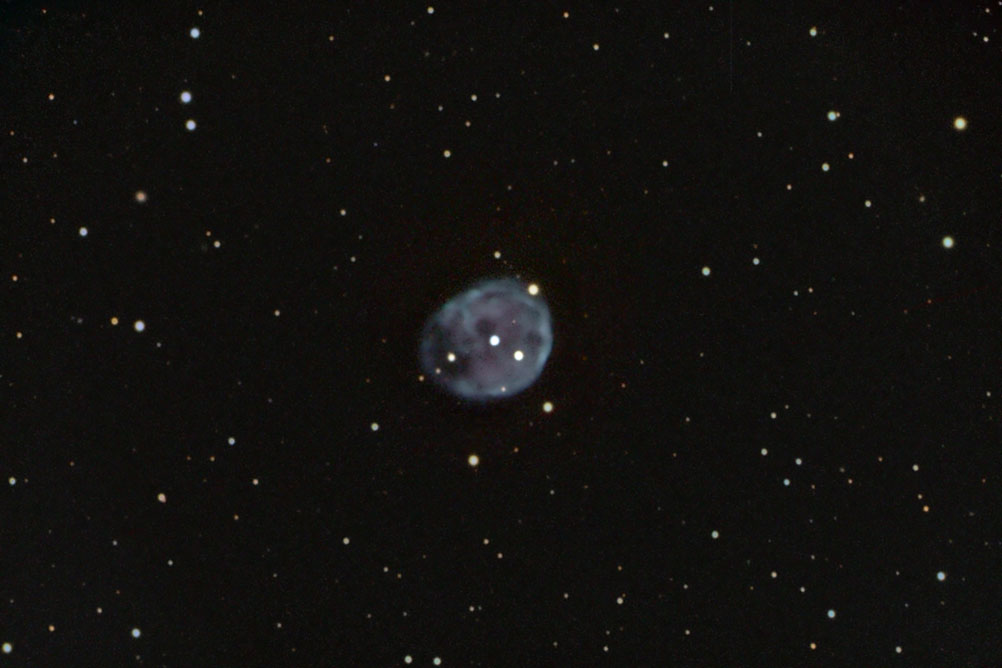