NGC 279 is a large galaxy in north-northeast Cetus that is about 160 million light-years distant. I measure its size at about 133,000 light-years. This one was suggested to me by Sakib Rasool who called it a shell galaxy. NED classifies it as (R\')SAB(r)0+ pec: I can\'t say I see a bar but it certainly is peculiar. Shell galaxies are thought to be caused by stars ripped from galaxies it has absorbed. So are plumes of stars ripped from colliding galaxies. The dividing line between the two is so fuzzy I won\'t go there. Just that I note the far north and south regions of the plumes or shells are bluer than a red region that surrounds an inner bluer (still red) region. The overall shape is quite irregular, with bulges and a loop to the north and maybe south. For all its unique characteristics I found little about what might have caused its odd shape. SIMBAD even lists it as a possible quasar. I guess due to its bright core. At only 160,000 light-years I find that rather unlikely. It appears most died out a billion or two years ago. If true this one may be the nearest known. I just don\'t buy this, however. NGC 279 was discovered by William Herschel on October 1, 1785 but isn\'t in either Herschel 400 observing program.

This part of the sky is poorly studied for galaxies. Only a few had redshift data at NED. Some weren\'t listed as galaxies but as Ultraviolet Sources (UvS). One had a redshift that puts it over 5 billion light-years distant and another over 6. They may be true quasars though NED didn\'t even list them as a candidate quasars.

Since these were usually found by the GALEX UV satellite the positions are rather vague. The only one I\'ve listed is so vague I\'m not sure what object was meant. There are three overlapping galaxies to the upper left of NGC 269. The position is between the upper two, closer to the center one. But the error circle is so large it overlaps all three. Another was so vague several objects were in its even larger error circle but nothing was close to the center of the circle. I passed on including it.

I may not have even prepared an annotated image but for the 9 asteroids I\'ve labeled. A couple others were so faint I didn\'t try to annotate them. The field is only about 7 degrees from the ecliptic. It\'s not uncommon to find a lot of them when imaging near the ecliptic. This isn\'t a record which is 13 or maybe 14, I can\'t recall but it is more than normal even near the ecliptic.

I should be used to some rather unusual names for asteroids but (17058) Rocknroll surprised me. Its naming citation reads: \"(17058) Rocknroll = 1999 GA5
Rock and roll music, which had its roots in African-American rhythm and blues, remains a prominent form of popular music worldwide since hitting the charts in the 1950s.\"

There is a galaxy cluster near the top center of the image. I\'ve labeled it though there was no galaxy seen at its center position which is just a bit right of a pair of galaxies or stars. No size was given but I see lots of possible distant near star-like galaxies in the area that I assume are part of the cluster. 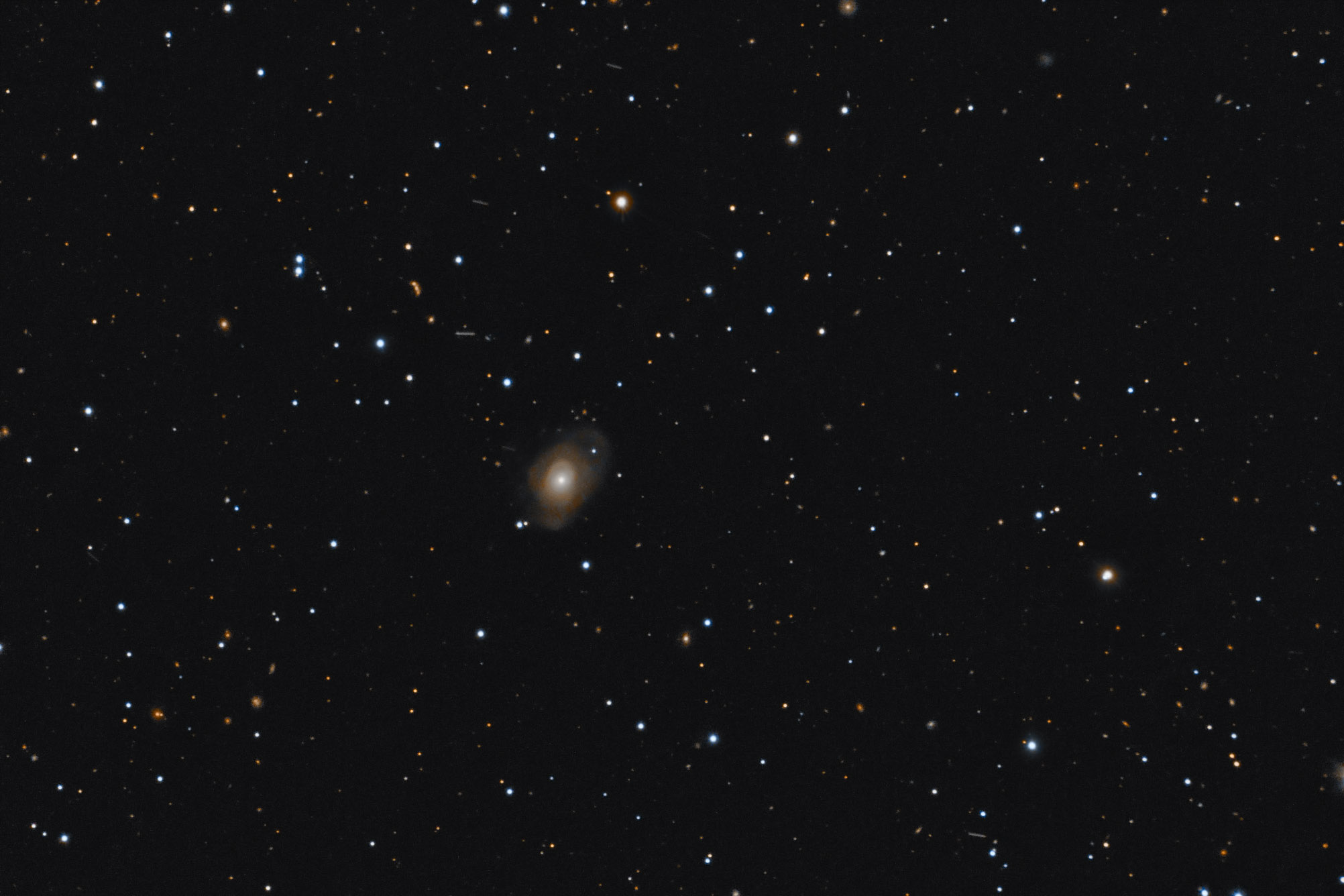 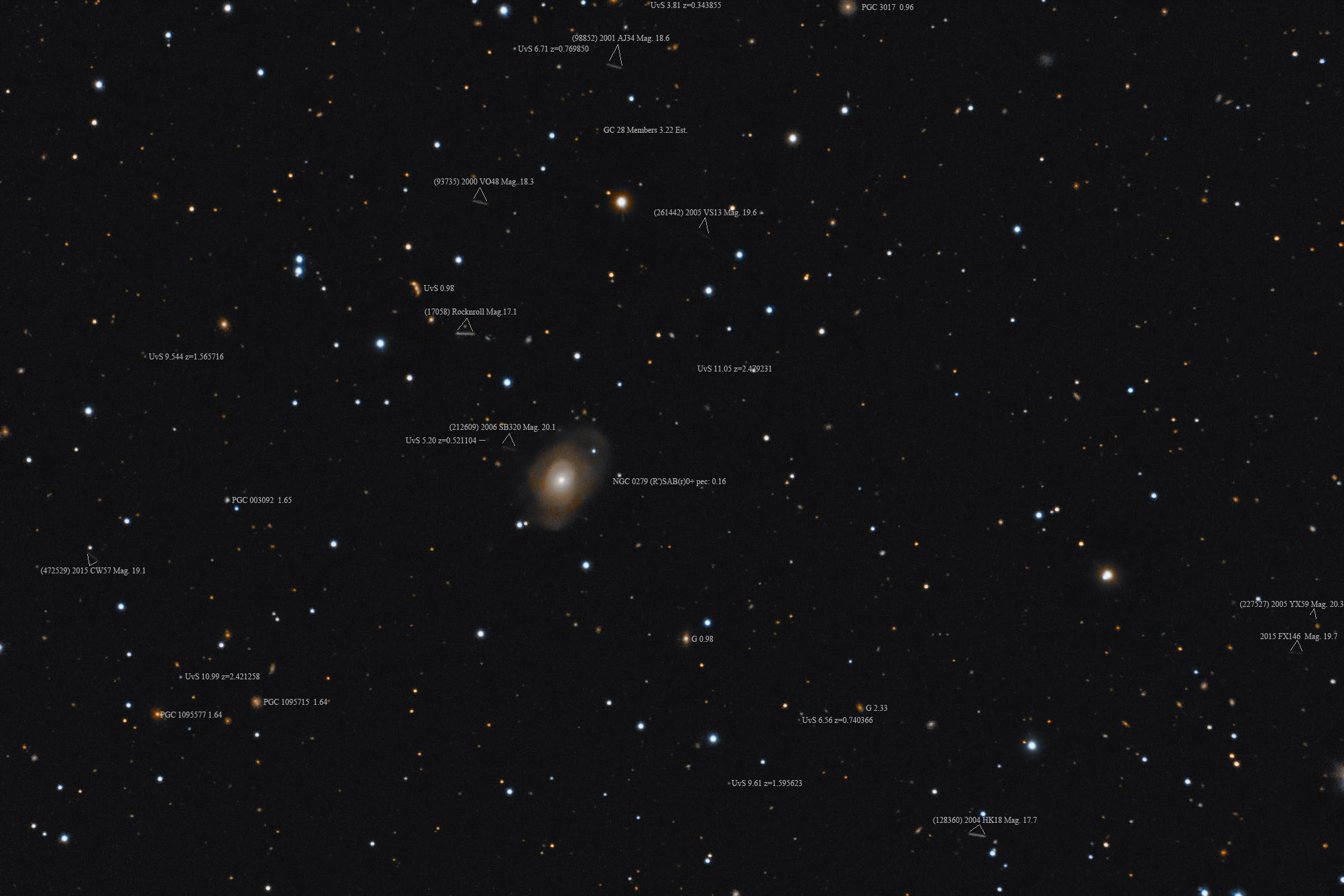