NGC 450, located in Cetus, and it\'s \"companion\" UGC 807 would seem to qualify for Arp\'s Atlas of Peculiar Galaxies on two accounts. First NGC 450 is a low surface brightness galaxy which was Arp\'s first category. Secondly, it would also qualify as a spiral with a high surface brightness companion on its arm. Guess he figured he had enough of both. In many cases of his category for spirals with companions on the arms, there were no redshift values either at the time of his atlas or today to decide if they were real companions or just line of sight galaxies. In many cases, the small galaxy seemed undimmed by the dust and gas of the spiral. I\'d mention I didn\'t think they were related with the small one likely far beyond the bigger spiral. I\'d get challenged on that from time to time. I\'d point out that its quite possible for a spiral to have used up most of its dust and gas except in obvious dust lanes so the lack of dimming didn\'t necessarily mean the companion wasn\'t a distant galaxy.

This galaxy fits my argument. In this case, we do have redshift values for both galaxies. NGC 450 is about 67 million light-years distant while its \"companion\" has a redshift that puts it at 500 million light-years! So it is a much larger galaxy seen very far away. Even though we see dust lanes in NGC 450 there\'s no evidence of attenuation of UGC 807 by dust and gas in NGC 450. Contrast is reduced at its southwest end due to being seen through a much brighter part of the foreground galaxy. Spectra data shows no additional absorption lines from gas in NGC 450.

NGC 450 is classed as SAB(s) cd: by NED and the NGC Project. UGC 807 is classed by NED as simply S for it is a spiral galaxy. The blue star-like object below the southwest end of the \"companion\" is considered \"Part of Galaxy\" so apparently is a bright blue star cluster. Below and left of it is a redder star-like object. This is considered an HII region in the galaxy. Right and down from the blue object is a fuzzier object. The Sloan survey lists it as simply a galaxy. I\'ve seen this with what is really a part of the main galaxy. In these cases, NED makes note of this. Here they make no correction. No redshift is available to answer this. For now, it too may be a distant galaxy seen through this low dust and gas galaxy. But consider further down and to the right is a star-like point of about the same color. It too is listed as a galaxy. Just right of the core is an even redder \"star\" which too is listed as a galaxy. Many others are listed at NED. I see no hint of this population of similar \"galaxies\" beyond NGC 450\'s borders. So I have to think these are more likely star clusters or HII regions in NGC 450 or possibly a foreground star in our galaxy rather than true galaxies. It was discovered by William Herschel on October 1, 1785 but isn\'t in either H400 program.

The only other NGC galaxy in the image is NGC 442 in the lower right with a prominent dust lane. It is classed as Sa-Irr II by the NGC project and S0/a: sp by NED. The S0 part seems odd to me It gets the irregular tag due to plumes that seem to come off each end. While I see them barely in the raw FITS they didn\'t survive the gradient removal caused by 38 Ceti. That star threw nasty reflections all across the image, one right on top of NGC 442. I can\'t tell real plume from nasty reflections from 38 Ceti. I need to take the galaxy with the star out of the field to pick up the plumes. I didn\'t expect so much junk from the star. At 240 million light-years it is unrelated to NGC 450 or its distant \"companion.\" It was discovered by Lewis Swift on October 21, 1886.

The image has quite a few quasars and distant galaxies. Their distances in billions of light-years are shown in the annotated image. 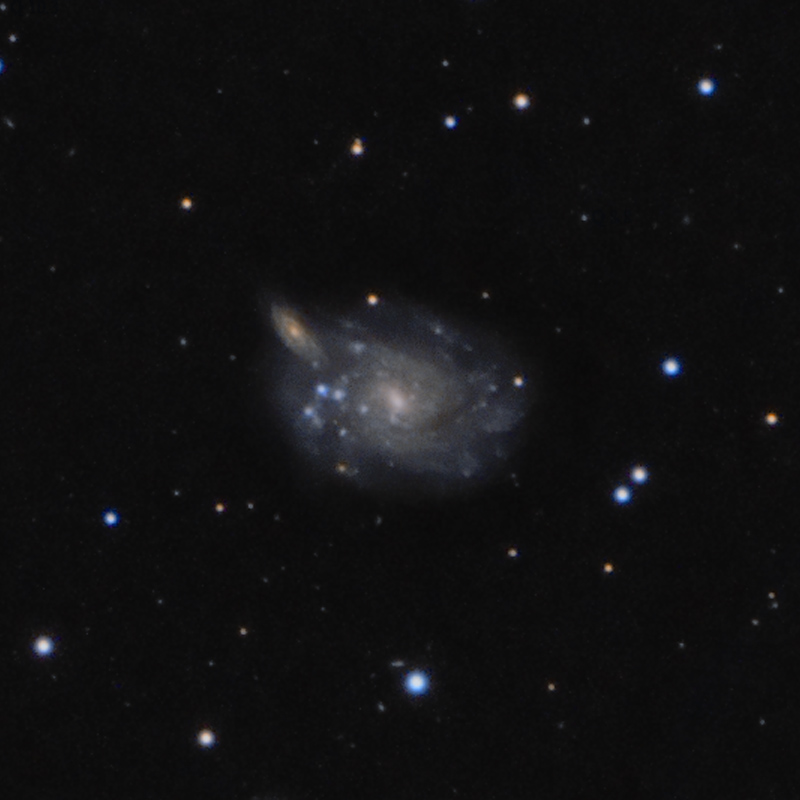 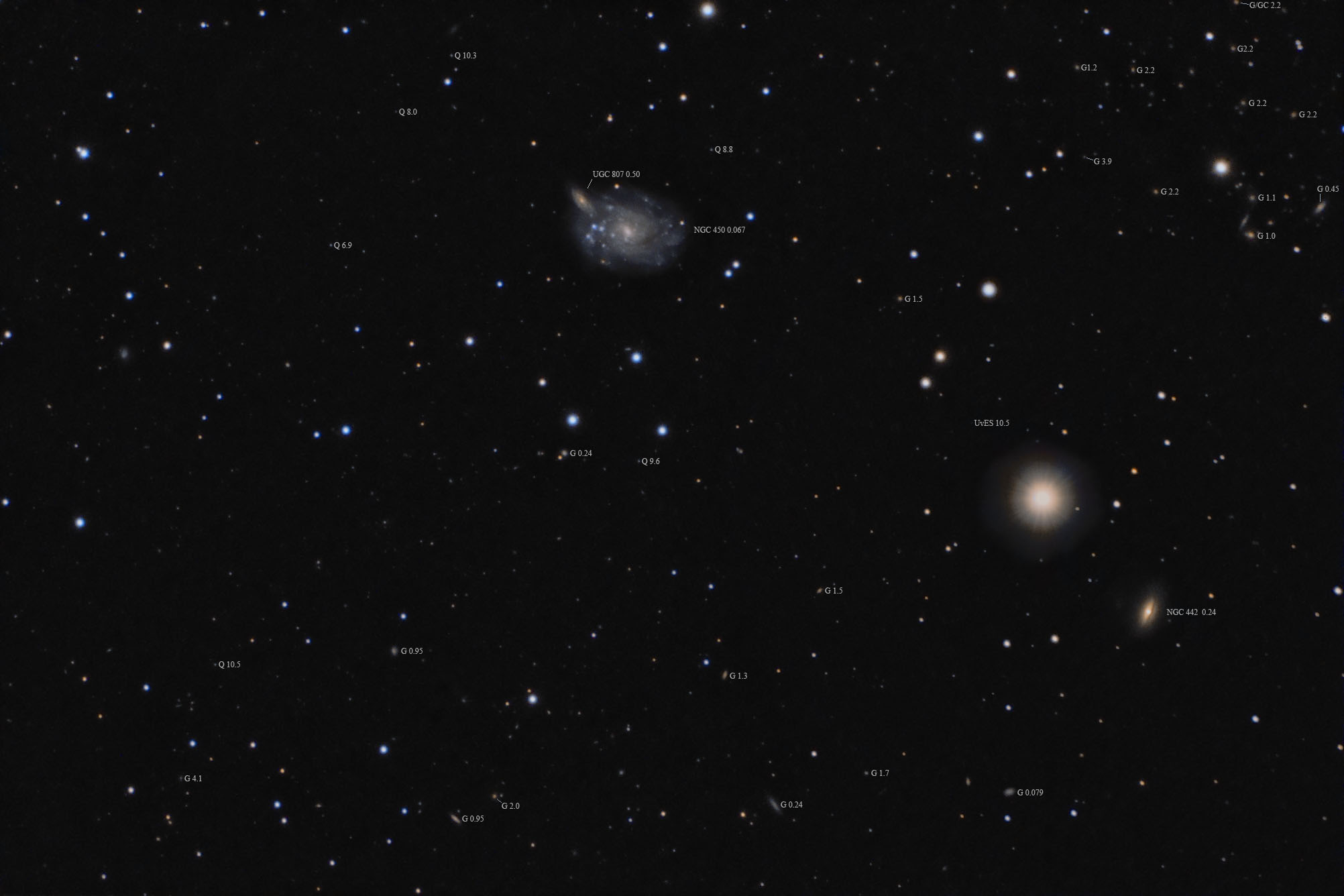 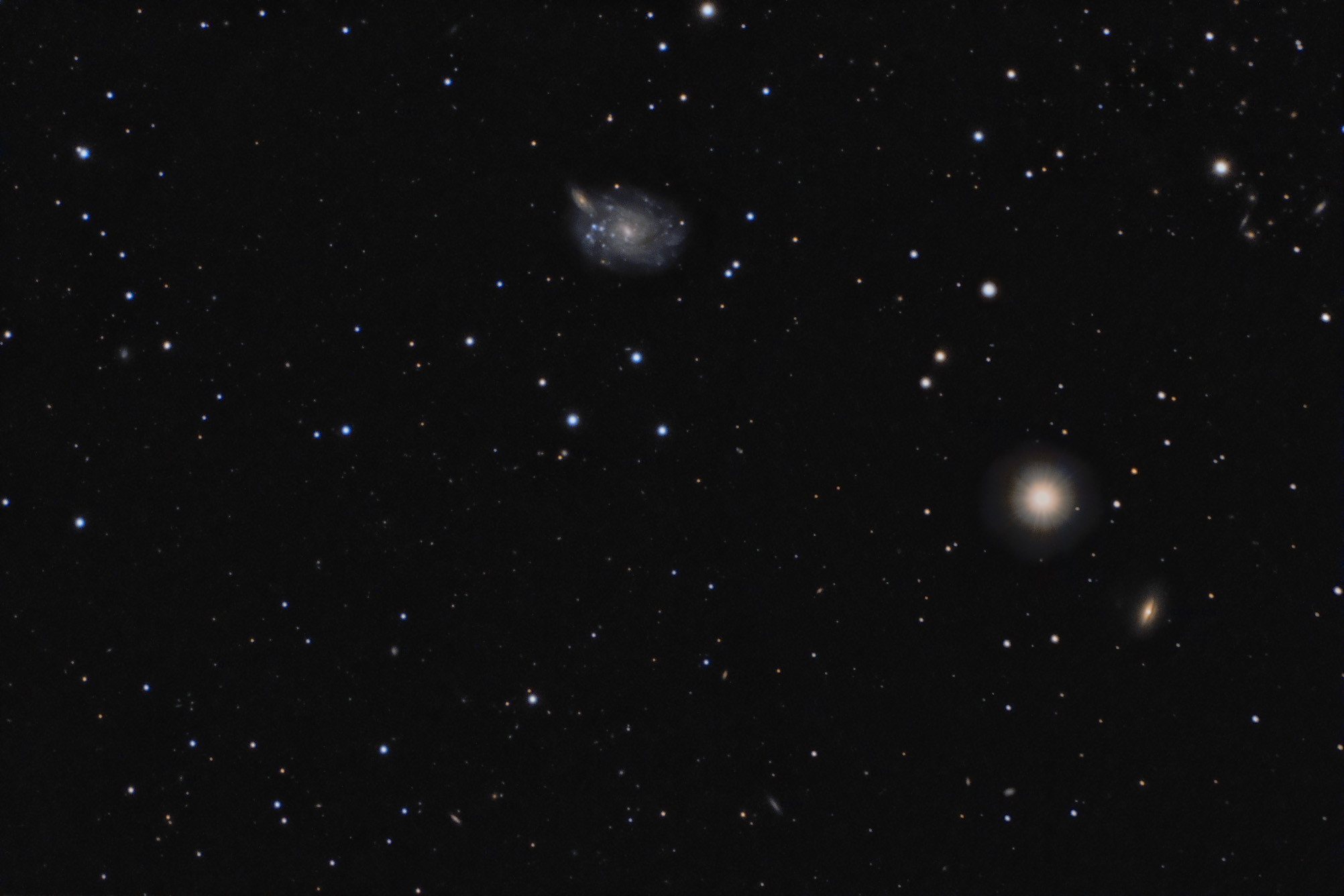