This is some of the NGC 0533 galaxy group located about 210 to 250 million light-years from us in northwestern Cetus. The group contains some 16 members scattered over the image and beyond. While named for NGC 0533 it was NGC 0521 that attracted my interest being a classic face on barred spiral though the bar is unusually narrow. Also, it is classified as having an internal ring. To me, it is a pseudo-ring (r\') because it appears to just be two spiral arms coming off the bar that almost but don\'t quite overlap. I moved it a bit west of center to better pick up NGC 0533 and put them all low as I thought I saw some galaxies to the north. But I was looking at a rotated image, they were really to the south so I lost IC 1694 I particularly wanted to catch. It is a double ring galaxy which would have added a lot to the image. Don\'t make my mistake.

I found no image of this field taken by an amateur and only one of just NGC 521 that involved a few amateurs and one pro. It was taken by Adam Block and some amateur students of his astrophotography class at Mt. Lemmon\'s Caelum Observatory using their 32\" scope. Other than this it appears totally missed by amateurs. Why such a neat field is ignored I can\'t fathom. I\'ve had it on my to-do list since before I built my observatory but weather has been so bad when it was within a hour of the meridian it hadn\'t been taken until last month. Amateurs are always asking \"What else is there to image?\" There are hundreds of ignored fields like this few take the time to hunt down. I find the hunt a great cloudy night activity and I learn a lot in the process As a retired university prof I\'m all for learning. Now to get back to the image.

Normally I find a fair agreement between redshift and non-redshift distance measurements. Not this time. In the case of NGC 0521, the non-redshift measurement has it only about half as distant as the redshift measurement does. I\'m going with the redshift as being more likely reasonable as nothing else in the image is at that distance while the redshift fits the NGC 0533 group. If correct the galaxy is nearly 190,000 light-years across. That makes it a huge spiral. If the closer distance of 110 million light-years is right it is just under 100,000 light-years across. While that would make its size more reasonable papers seem to call it an immense spiral which fits the larger size and distance. One source I saw says it has a Low Luminosity Active Galactic Nucleus (LLAGN) though NED didn\'t mention this. NGC 0533 has only a redshift measurement for its distance of 240 million light-years which results in a size of 275,000 light-years. One paper says of it \"We detect no features in this galaxy.\" These are two huge galaxies. Both were discovered by William Herschel on October 8, 1785. I expected one or both to be in one or both of the Herschel 400 programs but they aren\'t in either. That really surprised me.

I calculate a projected distance between the two at about 1 million light-years. It\'s likely at least some of the redshift difference is real and they aren\'t this close. I\'d expect to see some deformation if they were really that close for any significant period of time.

Also confusing as to distance is a quasar or AGN1 object between the two galaxies. NED has two different redshift values for it both by the same astronomer! One is z=1.56 and the other z=0.75 putting it either 9.53 or 6.61 billion light-years distant. While neither are listed as being photographic redshift estimates the lack of significant digits would indicate these are photographic redshifts. These can be hard to determine. It appears there may have been two solutions to the data. This is one reason I usually mark such quasars as quasar candidates as often they turn out to be blue stars in our galaxy once a spectroscopic redshift is determined. Not knowing enough to tell what category it belongs in I\'ve just listed NED\'s data rather than try to pass judgment on this one.

Also in the image to the left side is the center of the Abell 0189 galaxy cluster. One of Abell\'s lesser galaxy clusters. It has less than 30 members that fit its magnitude limit covering a one-degree circle. Its distance is listed at 431 million light-years. I see only a couple galaxies at about that distance in my image. The cluster is morphology class III indicating it has little to no core galaxy or galaxies.

While not a member of the Abell 0189 cluster centered within my image, some claim the two and a few others may be members of the nearby Abell 194 cluster whose distance NED shows to be 230 million light-years. The center of the cluster is about 3 degrees to the south. NED lists its radius at a bit under 2 degrees. So this pair is a degree beyond the edge as defined by NED. Not knowing how NED decides the edge of a cluster I can\'t agree or disagree with this position. 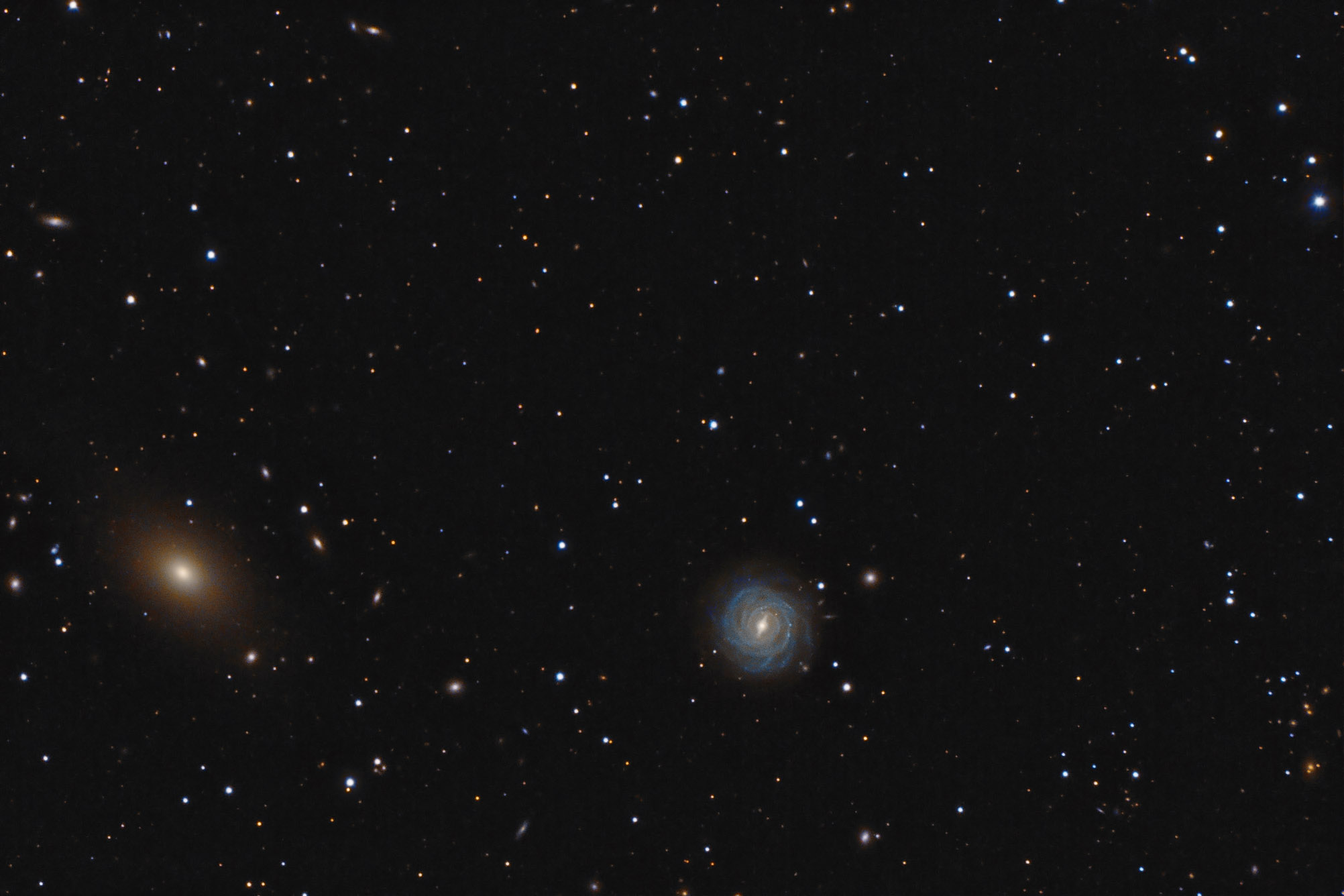 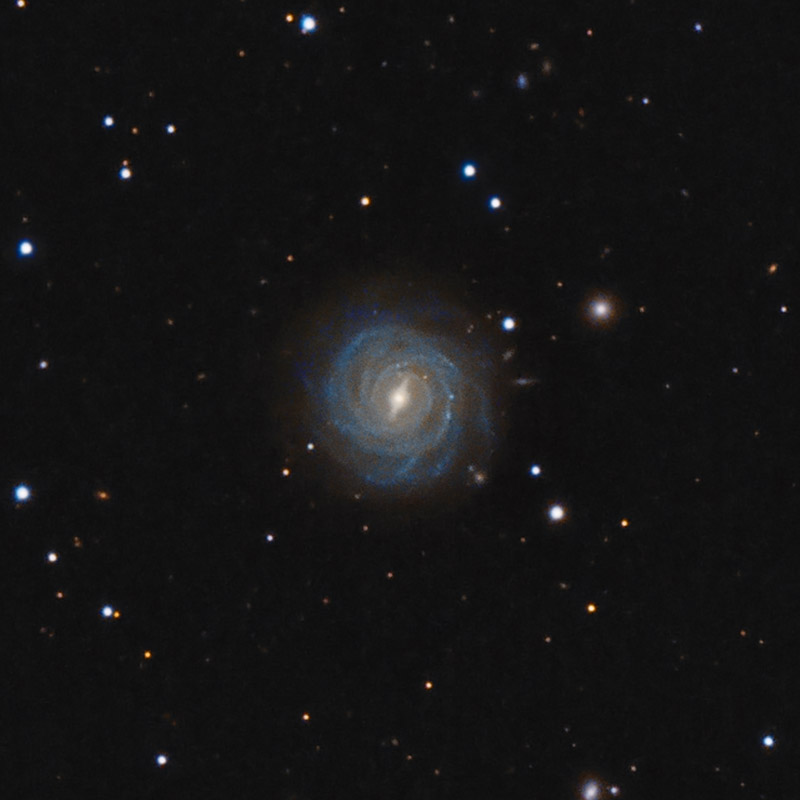 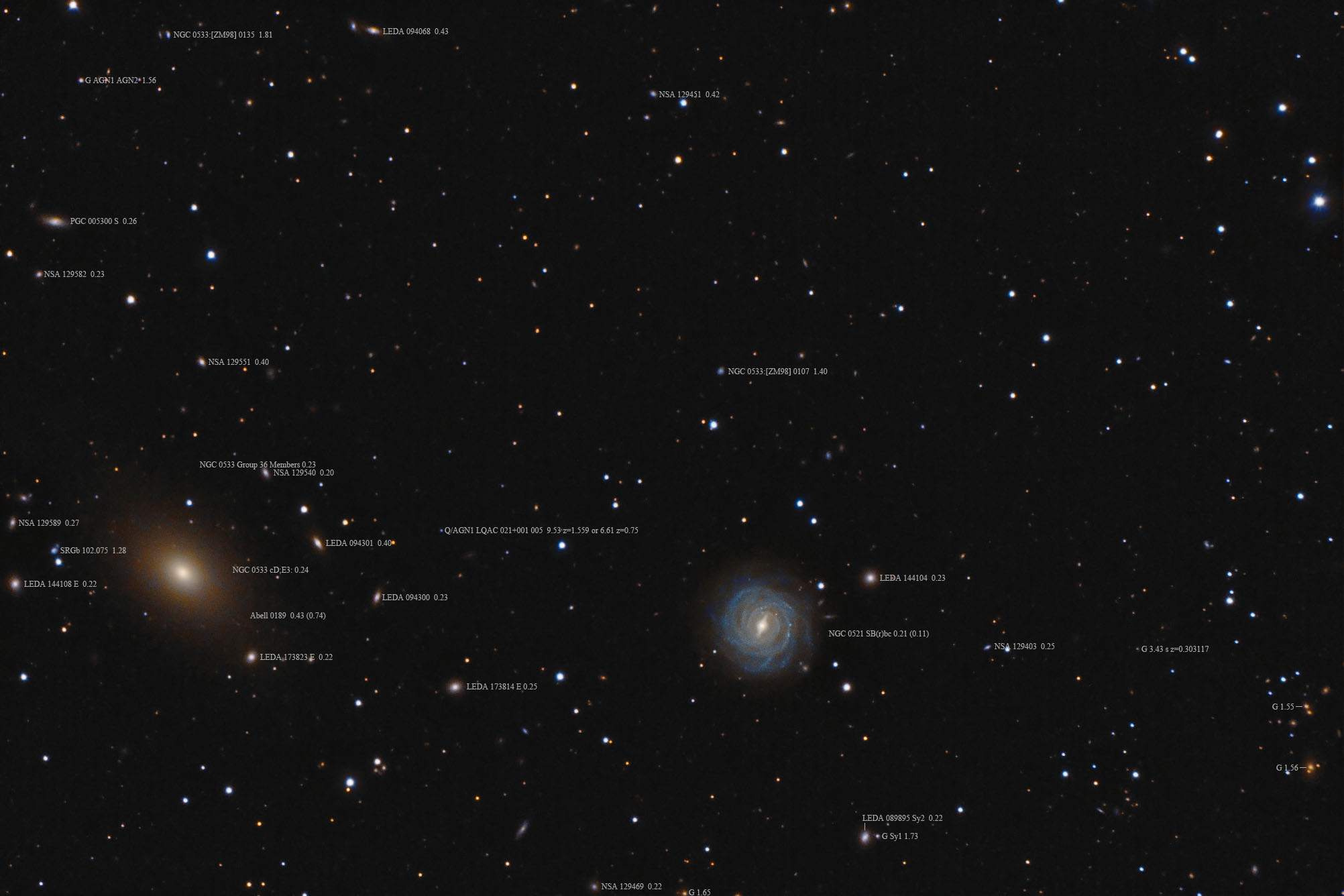