Hickson 10 is a group of 4 galaxies located a bit over 200 million light-years from us in Andromeda 3.5 degrees east-southeast of Beta. It consists of the 4 NGC galaxies 529, 531 536 and 542. Redshift measurements show LEDA 169778 and CGCG 521-029 as likely members of the same group but then it isn\'t such a \"compact group\" as Hickson describes for his list. On the annotated image I also have included in parentheses the Tully Fisher distance determination when available.

NGC 536 and NGC 531 appear likely an interacting pair in the group as both show large plume-like drawn out spiral arms typical of near misses. The arms of NGC 536 appear severely warped as well. Neither, however, show a strong blue color. Both seem to have plenty of dust and gas from which new stars are often triggered by such interaction. It could be this is hidden behind all the dust and gas. NGC 536 does have a very active nucleus as shown by its AGN status. This often indicates a galaxy that has been severely shaken up by interaction. NGC 529 has an extensive, somewhat blue halo much as if it is the result of a rather recent merger though I found nothing in the literature on this.

Only 14 galaxies in the field were even listed in NED. Being close to the \"Zone of Avoidance\" this region isn\'t as well mapped as regions further from the plane of our galaxy and its obscuring dust. All are listed by catalog name on the annotated image. Redshift, when available, is shown. If there are any quasars in the image they are still to be discovered or at least listed in NED\'s database. One asteroid was caught at the top center of the frame. As was common for much of 2012 and now in 2013 transparency was poor as indicated by how weakly the asteroid appears. Normally a 19th magnitude asteroid would be much stronger.

The \"brilliant\" 6th magnitude star HD 8673 near the bottom right of center created a huge reflection issue sending all sorts of them across the image. That made for a processing nightmare. I\'ll admit I cheated on this one. I gave up removing the reflections and saved the stars and galaxies creating a false background for about 60% of the image. Extensive gradient removal over the rest results in a somewhat fake looking background but it beat the reflections I was dealing with.

HD 8673 turns out to be a star with a known planetary candidate HD 8673b. In dealing with the reflections its intensity has been greatly reduced in this image until it appears only slightly brighter than other much dimmer stars in the image An unfortunate side effect of my reflection removal technique. 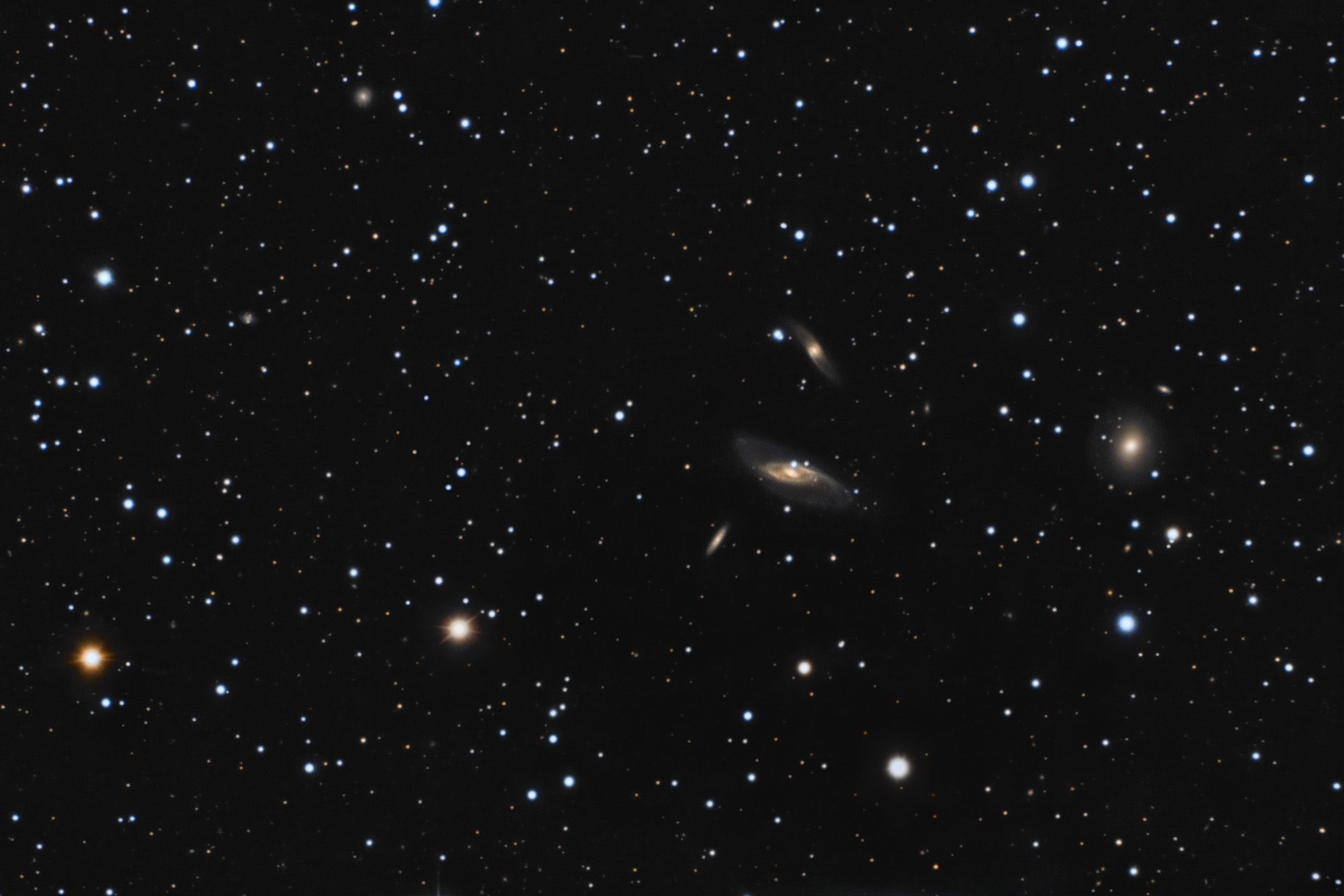 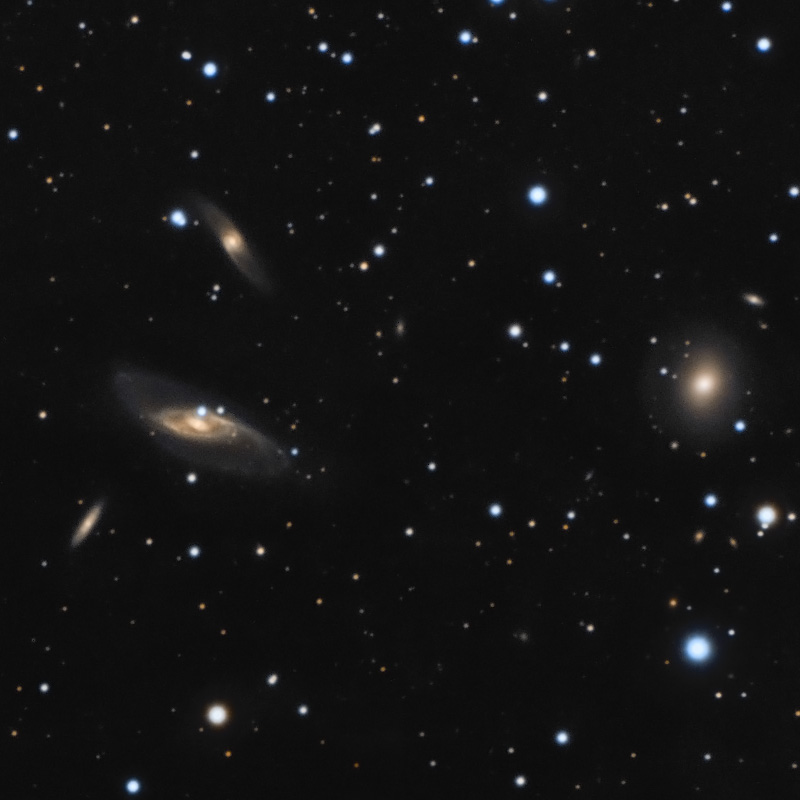 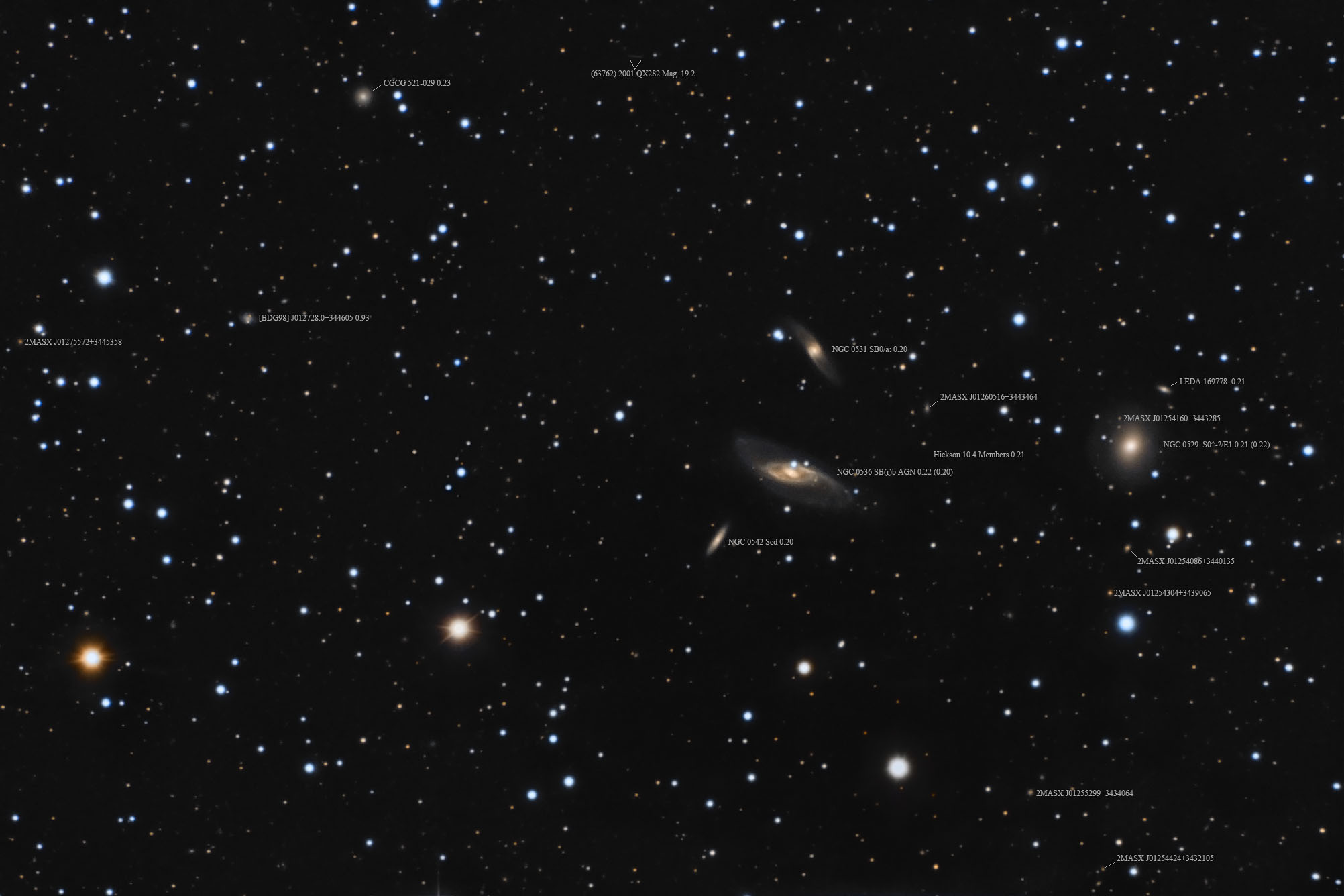