NGC 637 is a small, tight, open cluster in Cassiopeia west of the Soul and Heart Nebulae. It is in the original Herschel 400 observing list and was discovered by William Herschel on November 9, 1787. According to WEBDA, it is about 7000 light-years distant and only about 9.5 million years old, a very young cluster. It is listed as Trumpler class I2m meaning it is highly concentrated with a medium range of brightness and richness. My visual log indicates I needed fairly high power to see 5 or 6 of the brighter stars against a faint fuzzy background of a dozen or so faint stars. Not much to look at I ventured. But it is one that easily fits my rather small field of view.

One paper ( http://arxiv.org/pdf/1105.3121v1.pdf ) on it notes it is one of 6 open clusters rich in Beta Cephei stars. These are stars that are variable due to the \"kappa mechanism\" with an iron caused \"Z bump\". Here\'s how Wikipedia explains the \"kappa mechanism.\"

\"In a normal star, an increase in compression of the atmosphere causes an increase in temperature and density; this produces a decrease in the opacity of the atmosphere, allowing heat energy to escape more rapidly. The result is an equilibrium condition where temperature and pressure are maintained in a balance. However, in cases where the opacity increases with temperature, the atmosphere becomes unstable against pulsations. If a layer of a stellar atmosphere moves inward, it becomes denser and more opaque, causing heat flow to be checked. In return, this heat increase causes a build-up of pressure that pushes the layer back out again. The result is a cyclic process as the layer repeatedly moves inward and then is forced back out again.\"

While many stars vary by this means often this is due to hydrogen or helium ionization. In the case of Beta Cephi stars, it is due to iron at a depth creating a temperature of 200,000K.

The 2MASS lists 6 faint, star-like galaxies in the image. They are so difficult to see and impossible to tell from stars visually that I didn\'t bother with an annotated image.

Due to clouds, I started color one night of less than good seeing but soon was clouded out. I tried another night of better seeing and got the last two red frames. But when I went to collect luminance data I was shut down after only one frame due to clouds. Somehow I never went back. So I used all frames to make a pseudo luminance frame and processed the color frames normally. With little luminance, this one doesn\'t go as deep as usual but is plenty sufficient for this cluster. If seeing had been better for the blue and green frames I\'d have just made an RGB image but that was too fuzzy. Adding the one much sharper luminance frame and two red frames sharpened the stars considerably. I considered using only those three for the luminance but even though adding the other 4 made for slightly fuzzier stars some deconvolution helped considerably so I went with using all 7 to make the pseudo luminance frame. 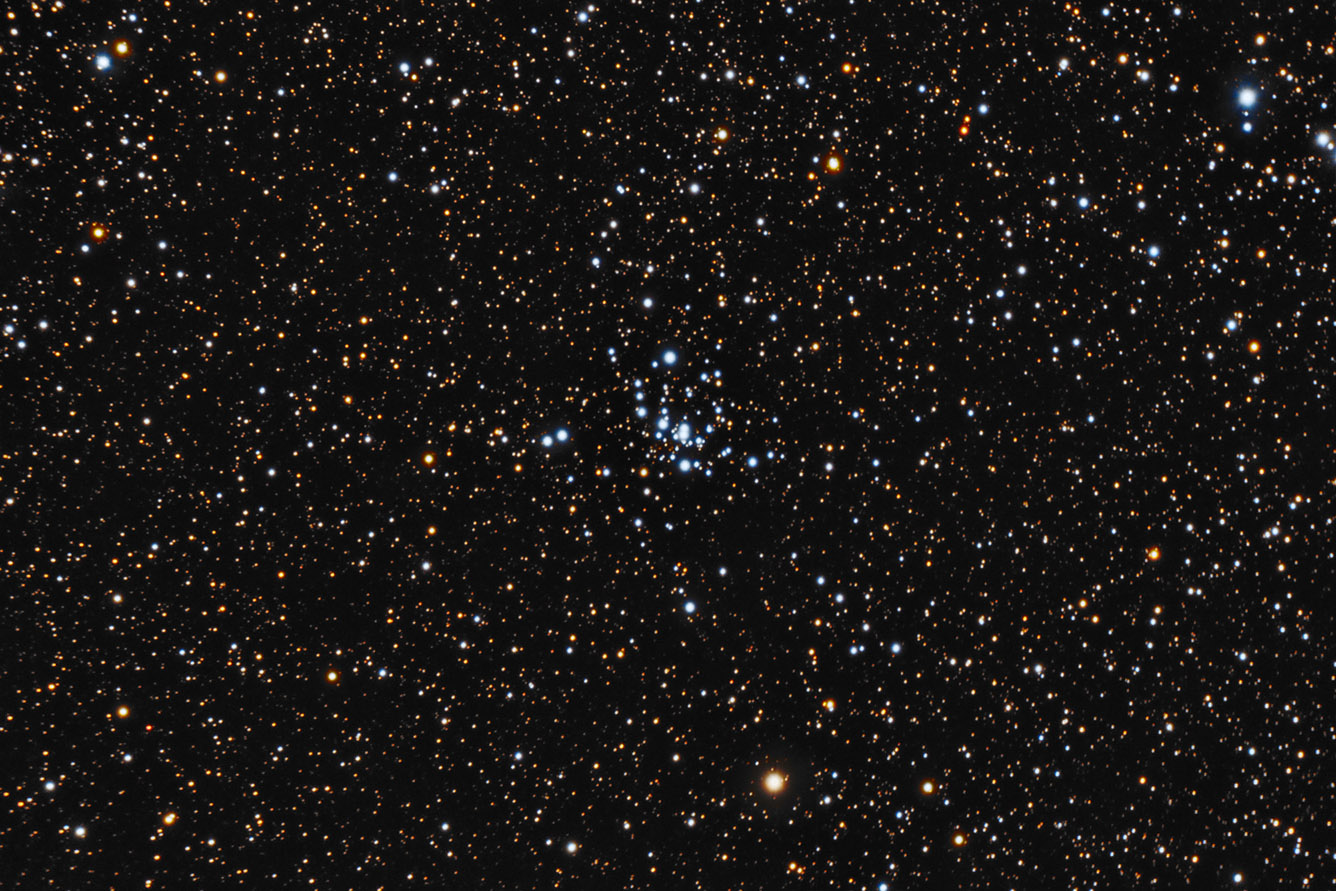