NGC 663 is an open cluster in Cassiopeia. It made my list by being a Herschel 400 object from his first list. My log entry, from July 14, 1985, right after I\'d noted a nearby tiny open cluster NGC 659 which I imaged back on November 3, 2010, reads: \"Large, scattered cluster of more than 50 stars. A very good cluster after all the small, tight, faint ones on the list.\" That last bit a reference to NGC 659. Most sources credit the cluster with some 400 stars rather than the 50 I estimated visually in my 10\" f/5 scope.

So why did it take so long for me to get this one right near the small one? The answer is it didn\'t. I took NGC 663 on November 9, 2010, less than a week later. Yep, I did it again. In yet another sweep of the hard drive, I turned up yet another lost object! I spent hours making sure I\'d finally found them all last time and now this one pops up. I wasn\'t even looking for lost files. Instead, I was verifying all had been backed up and this one wasn\'t on the backup drive but was on both the hard drive of the imaging computer from 2010, no longer being used, and on my processing computer but not in the \"to process\" log. That explains how it got lost. William Herschel discovered it on November 3, 1787. I almost took it on the 223rd anniversary of its discovery. My log entry from the first H400 program using my 10\" f/5 at 60x on an average night hurt by an aurora reads: \"Large, scattered cluster of more than 50 stars. Best seen in 10x50 binoculars or at very low power in a 60mm refractor. It\'s just lost in a 10\" telescope.

The cluster is also known as Caldwell 10 and is sometimes claimed to be visible naked eye though its listed magnitude is 7.1. It is thought to have formed in the Cassiopeia OB8 association. It has an unusual number of Be stars. Also, three blue stragglers have been found in it. These are the result of stars merging, a rather rare event in open clusters.

This was taken back when I binned my color data which I don\'t do today. Not because I didn\'t like the result be because it allows me to use color data to augment luminance when conditions make that necessary. I also took only half my color data. Something I still sometimes do with bright open clusters like this one with no galaxies in the background and no asteroids to remove.

A check of NED shows no galaxies listed. SIMBAD notes the Be stars I mentioned but little else. Since they appear the same as any other star, maybe slightly less blue, I didn\'t bother to annotate them. It would have made for a rather tightly packed image needing many lines pointing to the various stars. Those interested can plate solve the image with Astrometry.net and look them up in SIMBAD.

WEBDA indicates the cluster is rather significantly reddened by .78 magnitudes (that is almost exactly a factor of 2) which explains why the many B stars are rather white rather than blue as you\'d normally expect. I see a lot of images online with very blue stars for this cluster. I can only surmise they pushed the blue to achieve that. 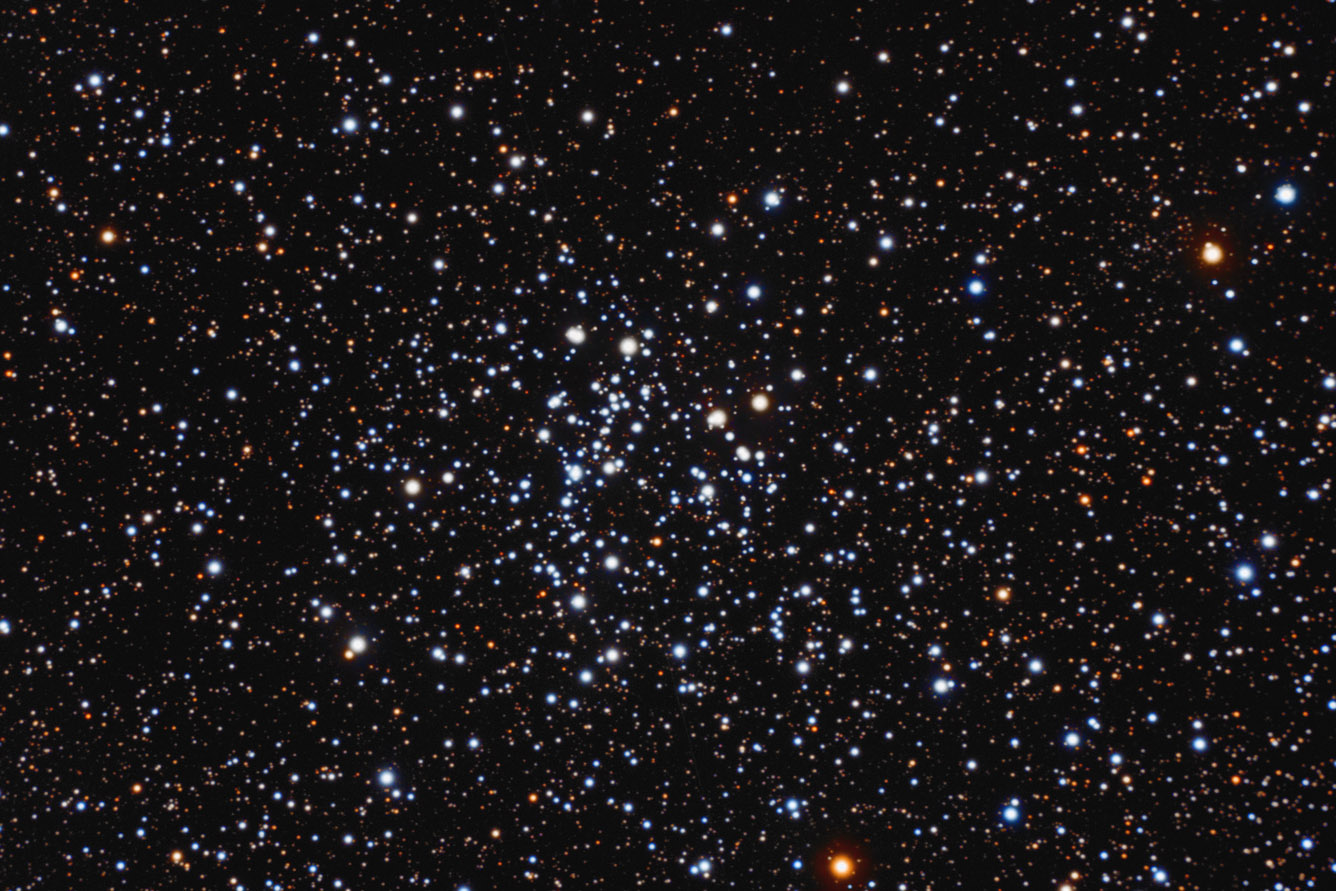