NGC 669 is a rather red and dead spiral in northwestern Triangulum. In fact, the top third of the image is in Andromeda. It\'s located on the southwest corner of the Abell 262 galaxy cluster the core of which is sometimes known as \"The Fath\". Its redshift distance of 200 million light-years is within the range of redshifts seen for this cluster which is put at 220 million light-years. Tully-Fisher measurements put its distance at 250 million light-years but some of the papers indicate they had to make some rotation rate fudges due to a weak signal from Ha sources so these readings may be off. The red and dead idea is supported by cold hydrogen data from radio telescopes. The galaxy is surrounded by a very large but very diffuse cloud of cold hydrogen. Hot hydrogen as evidenced by H alpha emission is also very weak. It appears much of its star building hydrogen has been thrown out of the galaxy. This could explain the lack of current star formation. The galaxy isn\'t distorted as if it had a major interaction to cause this but it may have been so long ago things are back to normal now but for the lack of star formation. Some of the red color may also be due to dust kicked out of the galaxy that is reddening it. Though I found nothing on this, just an idea I had. It also has an odd dust cloud along the rather dense dark lane which may be left over from some long-ago interaction. If part of the Abell cluster it doesn\'t lack for candidates now well out of my field. The galaxy was discovered by Édouard Stephan on November 28, 1883. The galaxy is huge for a spiral with a diameter of about 185,000 light-years by my measurement. If the Tully-Fisher determination is right then it is 230,000 light-years across. Another reason to doubt that measurement.

The galaxy is listed in the 2 micron flat galaxy catalog. While not seen edge on the core region does give the appearance of being very flat. I suppose that is what allowed it to make the catalog as there\'s no optical evidence of a central bulge, just a very small and not all that bright core. Usually, the bright core would be much larger and hide much of the far side of the galaxy due to its bulge. Thus if seen edge on this would likely be a very thin galaxy. Two other anonymous thin galaxies are in the image. One to the northwest and another possibly more distant one to the north-northeast.

To the southeast is the double galaxy of UGC 01258. They appear connected by a tidal stream and neither has much structure left, if they had any, to begin with. The southern and brighter part has a redshift that puts it at 190 million light-years so it too could be part of the Abell 262 cluster and likely related to NGC 669. Oddly the fainter northern galaxy is at the position the PGC has for this pair. I\'d have expected the position to be between the two as it is for the UGC 1258 designation. The pair cover a projected distance of about 70,000 light-years. Assuming each ends in the middle of the tidal stream the northern galaxy is 28,000 light-years in size and the lower 42,000 light-years across.

The night I took this was very hazy causing nasty halos around even the fainter stars. I tried reducing the halos but that seems to have caused some stars to elongate in various directions probably due to where the haze halo was the brightest. I\'m not sure it was worth the effort. 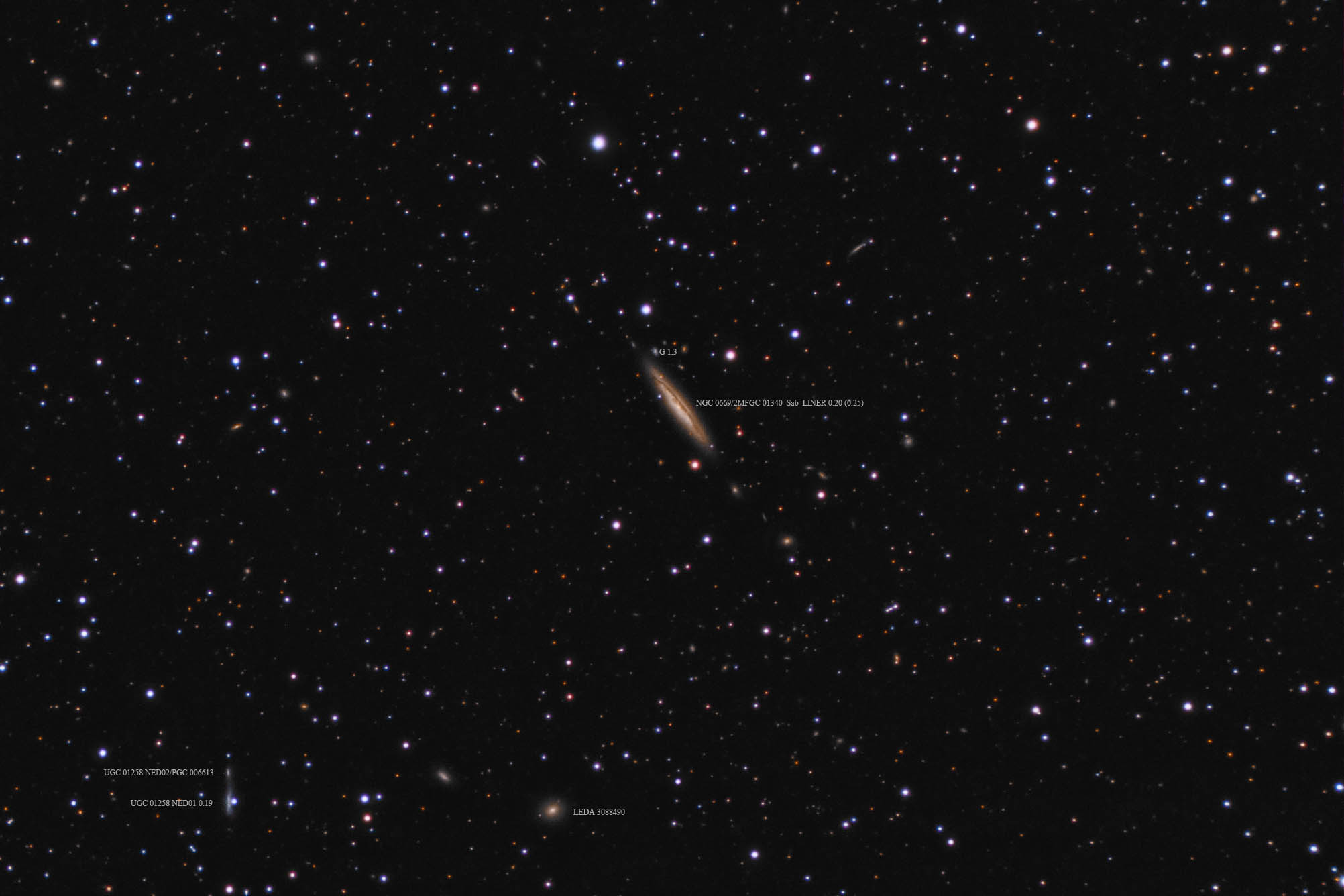 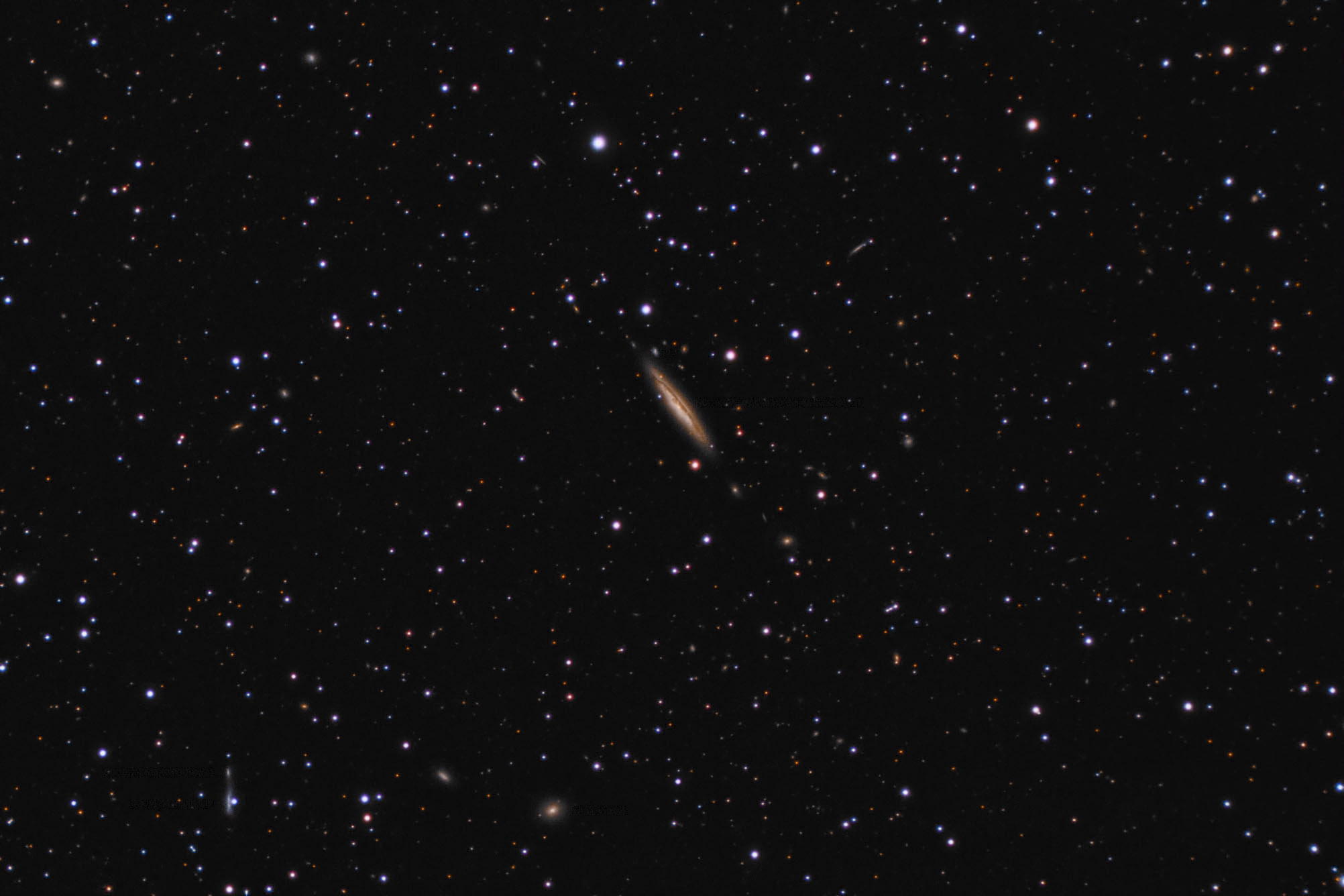 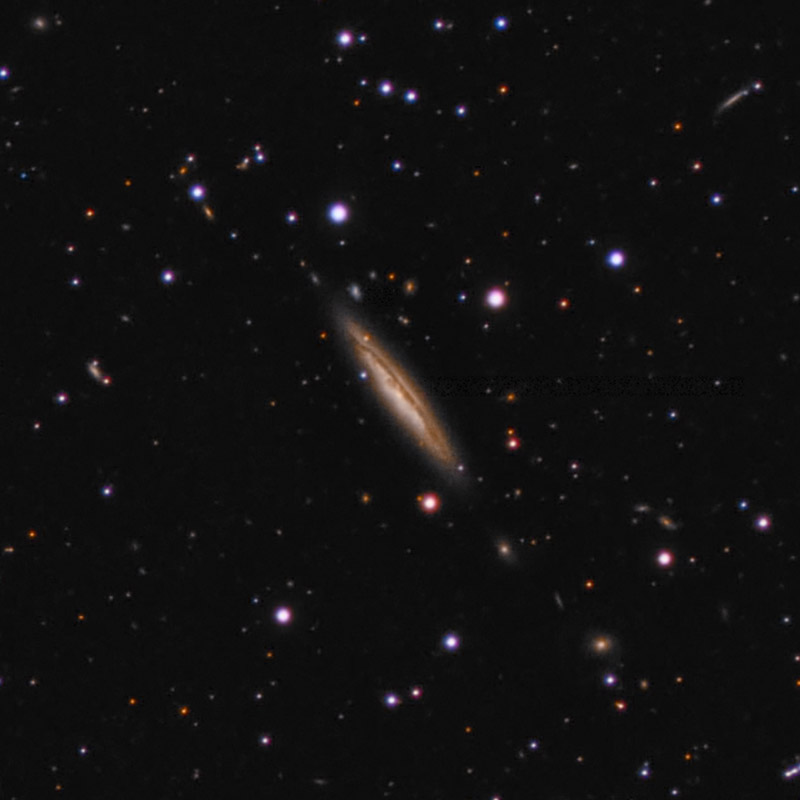