NGC 752 is an open cluster in southern Andromeda. WEBDA puts it at 1800 light-years distant while SEDS and Seligman say only 1300 light-years. Adding to the confusion The Sky\'s Hipparcos data shows the brighter blue stars in the cluster at about 500 light years, one at only 56. There are an unusually large number of red giant stars seen across the cluster. WEBDA puts the cluster\'s age at 1.1 billion years. Old for an open cluster thus quite likely some of its stars are currently red giants. SEDS says it is a degree across which means it extends far beyond the borders of my image though when I look at the POSS plate showing a two degree field it appears most of its stars are within my field. WEBDA says the cluster has no significant reddening.

The cluster was first recorded sometime before 1654 by Guillermo Hodierna. Unfortunately for the Sicilian astronomer, he published his finding of this and several other NGC and M objects in an obscure Sicilian journal where it was never seen by Dreyer, Messier, Herschel etc. Later William Herschel found it on August 24, 1783. Caroline independently found it a month later. It is in the first Herschel 400 observing program. MY log entry from July 14, 1985 using my 10\" f/5 at 60x reads: \"Large, scattered cluster of mostly bright stars. Best seen in my 10x50 binoculars or my 60mm scope at 24x. It is pretty well lost in the 10\" scope.\" Given that description and the even smaller field of view of my present imaging system, I have no idea why I put it on the to-do list.

Quite a few galaxies are in the image, most small and star-like. Only two have redshift data at NED. CGCG 522-095 is the spiral galaxy to the lower left. It is just listed an S.. at NED. I\'m not sure what those two periods mean. Redshift puts it at 630 million light-years from us. 2MFGC 01474 is the flat edge on galaxy to the upper right. It has a redshift that puts it 650 million light-years away indicating the two may be part of the same group. NED gives no classification for it.

This was taken through a nasty haze that didn\'t limit brightness all that much but sure did put bright halos around the stars and severely brighten the field in the area of the bright cluster stars. My removal of this is rather ham-handed I\'m sorry to say. 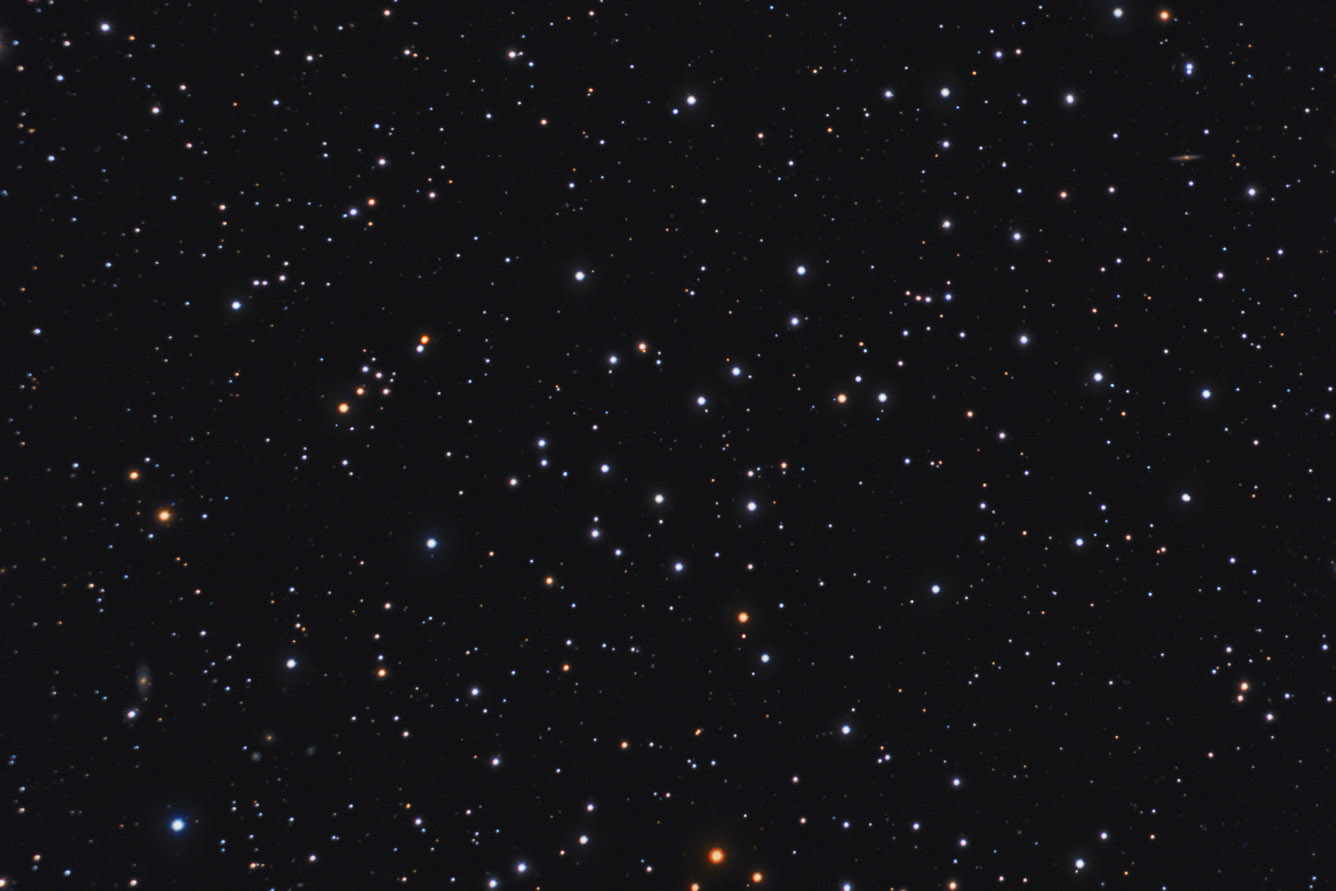