NGC 784 appears rather similar to the WLM galaxy in my previous post. Though it may be quite different. It is located in Triangulum about 15 million light-years distant. While it appears smaller than WLM it is more than 4 times further away so is actually nearly three times larger at 30,000 light-years. NED classifies it as SBdm: meaning it is a barred dwarf spiral similar to the Magellanic Cloud galaxies. It was discovered by Heinrich d\'Arrest in 1865 with an 11\" refractor. As it is a fairly easy galaxy in my 10\" visually it is a wonder it wasn\'t found earlier. Notes at NED indicate it isn\'t fully resolved into stars indicating it is much further distant than its redshift would indicate (less than 2 million light-years by that measurement). Even the 15 million light-year distant would be close enough for it to be well resolved I\'d think. That likely means most of the star-like objects I\'m showing are star knots. A few are star clusters which can be seen in the annotated image though you might have to blow it up a couple times to find them. One is far removed from NGC 784. Does it belong to LEDA 166065 instead of NGC 784? That galaxy is also at about 15 million light-years and thus likely related to NGC 784? It seems far removed from it as well. NED doesn\'t distinguish open clusters from globular clusters in distant galaxies so I can\'t say which these are. Most have a slight red color so I\'m going to assume they are globulars but can\'t prove it. My shot of planetary nebulae in M31 showed some objects thought to be globular clusters in M31 were really distant galaxies. Could that be the case with some of these clusters, especially this last one that\'s all by itself? With no redshift, I can\'t tell.

The field is rather poorly studied. Only 2 other galaxies had redshift data and only 5 others were even listed in NED! All are shown in the annotated image. One asteroid did make an appearance. You\'ll note it as a streak then a gap then one short streak. This is because I started a second luminance round of 4 images hoping to get some of the fainter parts of NGC 784 but clouds had another idea and cut me off after only one luminance image from the second series. I never had a similarly good night to get more data without hurting my resolution so went with what I had.

Like the WLM galaxy, I did the same night, the observatory floor lights were on during this image session. It did add a rather nasty gradient across the image, far worse than in the WLM galaxy for some reason (light in the back of the camera?). The strong measures to remove it resulted in a rather artificial looking background. The clouds that cut off the night saved any further harm as I found the error before the next clear night. 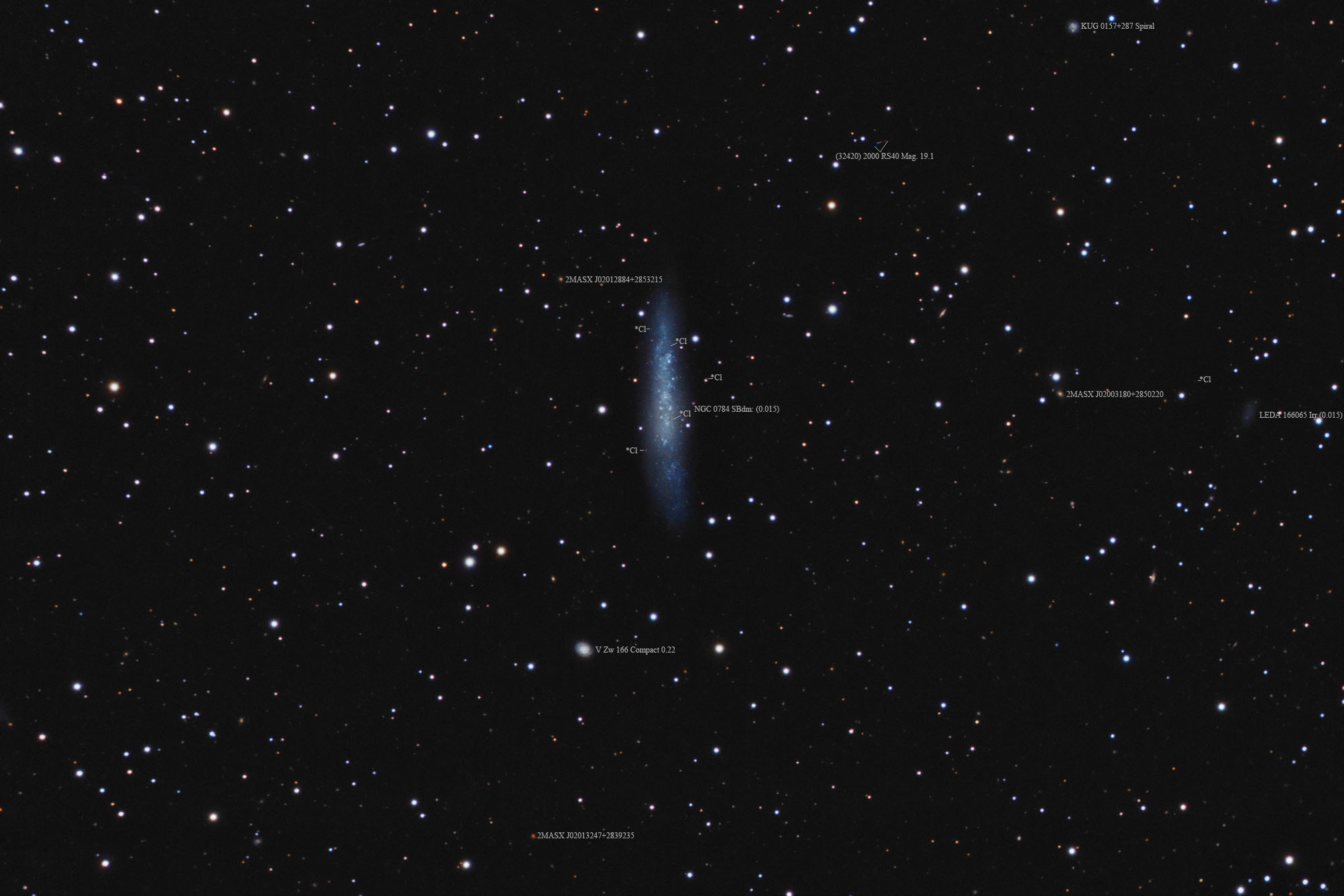 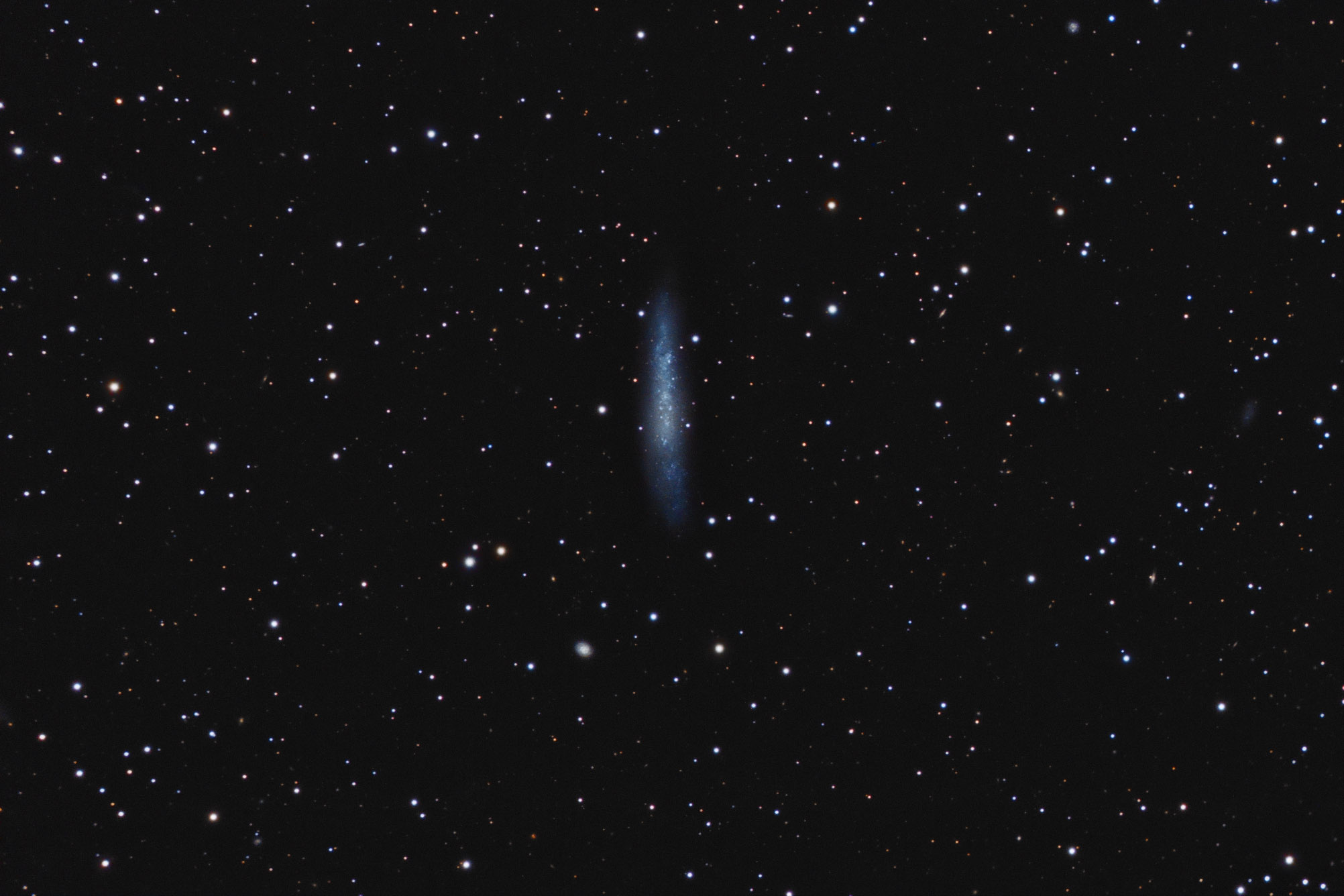 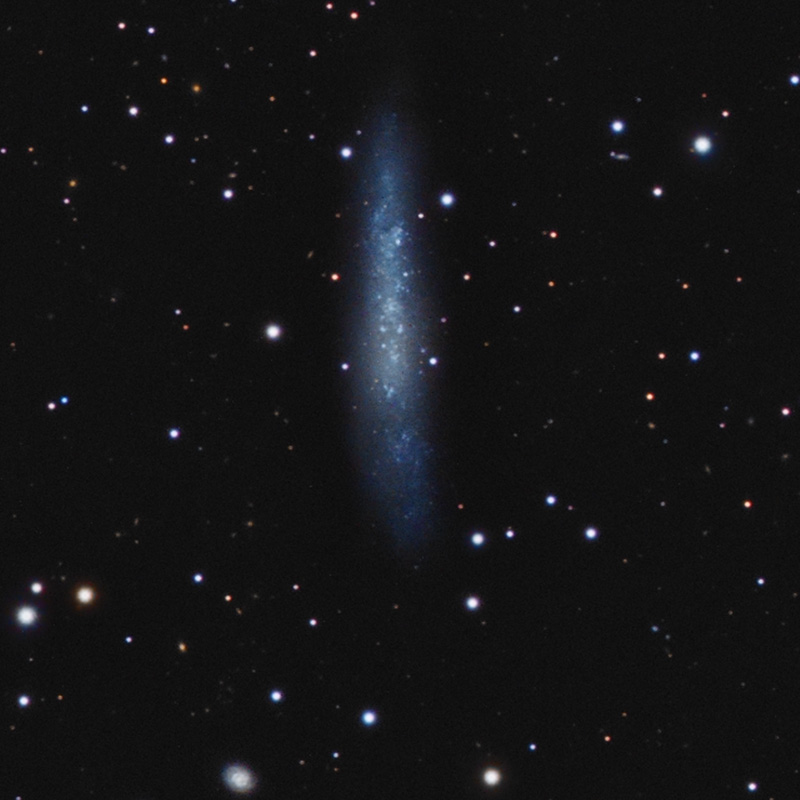