NGC 799 (top) and NGC 800 are two probably interacting galaxies in north central Cetus about 260,000 light-years distant by redshift. The pair is just below the celestial equator. Using J2000 coordinates NGC 799 is about 6 minutes south of the equator which lies just about halfway between it and the top of the image. Using current coordinates the equator is only one minute north of the galaxy so its upper edge is almost reaching it. That shows how much the earth\'s wobble (precession) has changed coordinates in 16 years.

NGC 799 is classed as a (R\')SB(s)a: galaxy by NED and Seligman. Seligman says (R) rather than (R\'). The NGC Project, however, ignores the pseudo ring saying it is simply SBa. Notice the outer rings don\'t seem to connect to the bar or any part of the central oval of the galaxy. Thanks to these huge but low surface brightness arms the galaxy is some 140,000 light-years in diameter.

NGC 800 looks like it could have made Arp\'s category for three armed spirals though the eastern arm is really a spur from the south going arm. Besides the spur, the south going arm has a kink at its southernmost extent. It then fades but can be traced to where it nearly parallels the other main arm in pointing to NGC 799. The north going arm seems to be reaching out to NGC 799 and the entire galaxy appears slightly stretched north and south. The core even seems a bit oval north and south. I thought it might result in it being called a barred spiral but that\'s not the case. NED says SA(rs)c: while Seligman leaves off the questioning colon. The NGC project says simply Sc. Again they ignore any mention of a ring structure which in this case NED and Seligman say is what the inner region resembles due to the tight arms around the core region. It is about half the size of NGC 799 at about 78,000 light-years. The separation of the two cores, assuming they are at the same distance from us is actually less than the diameter of NGC 799 at 137,000 light-years. If that close they have to be interacting which I think is evidenced by both main arms of NGC 800 ending about when pointing to NGC 799. Thus the northern arm is much shorter than the southern rapping only half as far around the galaxy likely due to tidal forces from NGC 799.

Both galaxies were discovered by Lewis Swift on October 9, 1885.

There\'s a likely third member of the group in the upper left corner. It is a much smaller galaxy ASK 035151.0. I can trace its size to about 39,000 light-years on the luminance FIT but that is too faint to survive the JPG. That part is only 17,000 light-years across. No one has attempted to classify it. I assume it would be considered a dwarf irregular galaxy. I wonder if the large, extremely faint region around the brighter core might not be due to it having at one time passed close to either or both of the NGC galaxies.

Unfortunately, I was fighting bright blue airglow the night this was taken which drown out the full extent of this little galaxy. Then being in the corner of the image where vignetting is present doesn\'t help to pull it out either.

Some time back when covering the Abell 2626 cluster (on January 5, 2016) I mentioned I was surprised by not one quasar in the image. Several contacted me about the comment. Usually, in a well studied field several quasars are turned up, sometimes quite a few. It may be this field was studied only for the cluster and never looked for quasars which are usually star-like and sometimes found by radio rather than optical scopes. This field makes up for the cluster as it has 14 NED considers quite likely quasars with good spectroscopic redshift measurements that pretty well cinch it. Another has its galaxy slightly resolved (not by me) and thus is listed as both a galaxy and quasar while the 16th is listed as a UvES (Ultraviolet Excess Source) with only a spectroscopic redshift. These sometimes turn out to be stars with odd spectral characteristics when seen photometrically that mimic quasars. So this field has 14 to 16 quasars depending on how you count these last two. Far above average making up for the Abell 2626 image. Actually, there were several more but thanks to the strong blue airglow they didn\'t survive the removal of the blue airglow. Under good conditions, they\'d have been quite easy bringing the count up by three. Several more are just outside the top and bottom of the field. This field turned out to be quite a nest of quasars for some reason. Since Arp thought most, if not all, were ejected by active galaxies I wonder what he\'d have made of this field?

One of the quasars I\'ve labeled as FSRQ which stand for Flat Spectrum Radio Quasar a rather odd class of quasar not well understood, at least by me. So I won\'t say any more on it.

This is my last 2015 image taken December 7 with the rest of the month unsuitable for deep sky imaging. Like much of my imaging in 2015 conditions were well below what I\'d come to expect based on the first 8 years I was here. 2014 was well below those base years and 2015 even worse. 2016 isn\'t starting much better. But my backlog is way down and while I\'m 3 months behind only January had more than one or two usable nights. 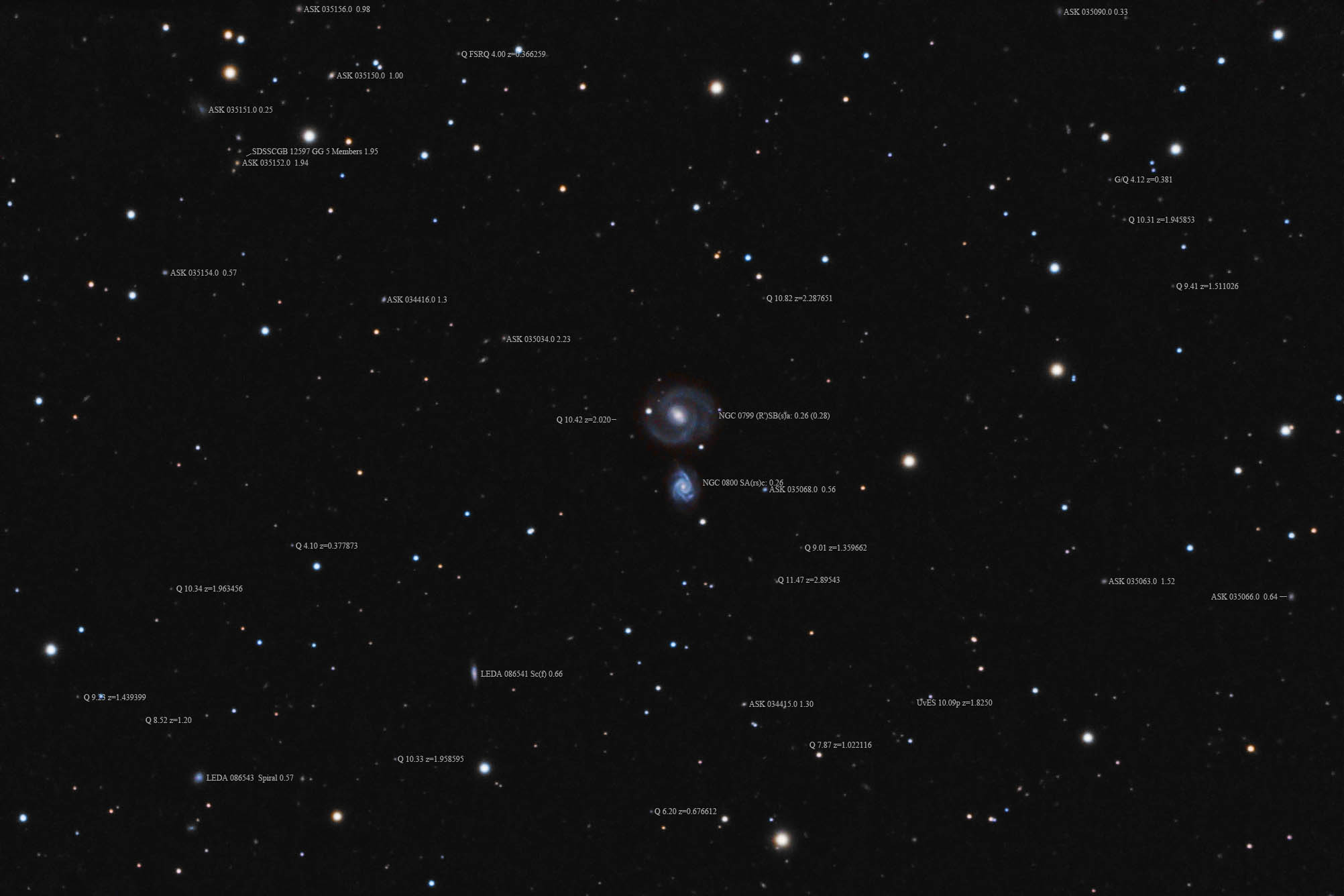 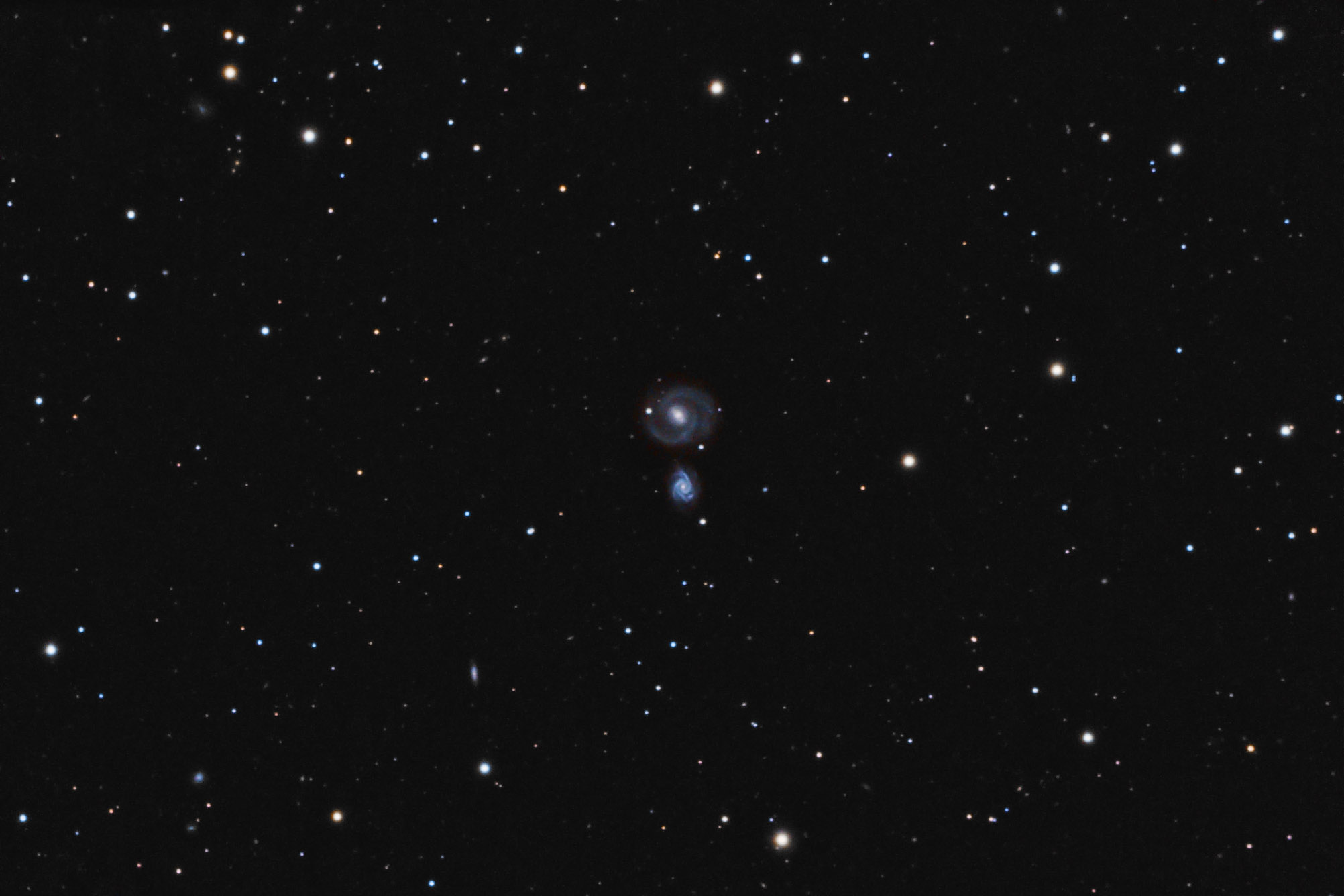 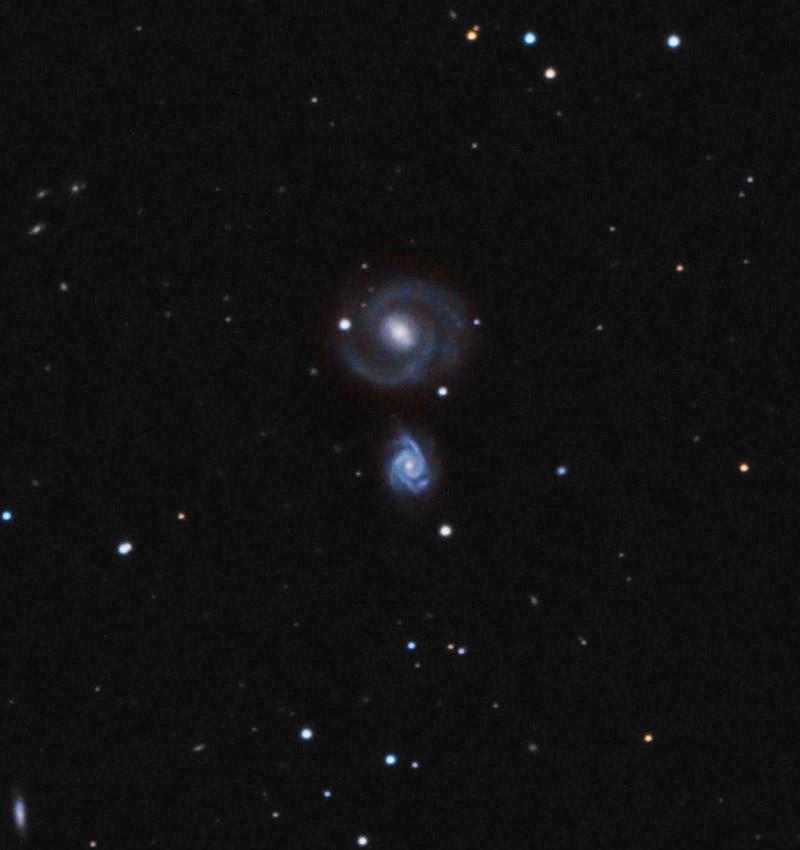