NGC 877 is a barred spiral galaxy in Aries about 170 million light-years from us. Tully Fisher measurements closely agree ranging from 150 to 180 with 170 being the median value. While I found little on it I think it quite possibly interacting with NGC 876 or at least it has interacted with some other galaxy as it has a faint plume to the northeast that curves around somewhat following the shape of the galaxy. It has a plume to the east off the southeastern end of the galaxy that appears to run right by the northeast edge of NGC 876\'s disk possibly covering it up. It ends in a puff to the northwest of NGC 876\'s core. While I\'ve seen NGC 877 described as a grand design spiral it looks far too messed up for that classification to me. Its arms are mostly just arm segments that have no order to them. A major one runs from the west side of the core up and over the north end of the galaxy yet isn\'t connected to the core, bar or anything that I can see. An arm segment below its start is rather linear and made up mostly of knots. The edges of the arms along dust lanes show quite a bit of H alpha pink in my image indicating a lot of star formation is going on in these areas. Another indication of possible recent interaction. Also, note the designation of LIRG in its classification. That stands for Luminous Infra Red Galaxy. This usually is caused by dust heated by massive star formation. It was discovered by William Herschel on October 14, 1784. It isn\'t in either H400 program

NGC 876 is an edge on SAc: spiral that is very red. While its southwestern disk is clearly seen to the end the northeastern end seems cut off or missing. Possibly hidden behind the plume of NGC 877 though I found nothing in the literature about this. While it looks rather sedate and the red color would indicate age it does have some spectral lines that might indicate it is more active than it looks. Its distance as indicated by Red Shift is virtually the same as NGC 877. The Tully Fisher distance measurements are all over the place, however, ranging from 170 to 300 million light-years with a median value of 220 million, far beyond the redshift distance. Since those values are scattered I favor the redshift value. It was discovered by R.J. Mitchell on November 22, 1854.

UGC 01761 is a low surface brightness rather disturbed looking spiral that is classed as an irregular galaxy of the Magellanic class. It too has a redshift distance of 170 million light-years. It has no Tully Fisher estimates.

Another reason for my imaging this field is the presence of a Flat Galaxy Catalog galaxy, FGC 0270. Unfortunately, NED has no data on it other than saying it is an Sc spiral. Is it a member of the same group as that of NGC 877? Possibly but it appears more distant to me. Likely it is somewhat between the group\'s distance and that of NGC 870.

Unfortunately, this field is in a part of the sky not covered by most surveys so that is about all I can tell you about this field. Obviously, there are a lot more galaxies in this field as well as what appears to be a likely galaxy cluster southwest of the bright star below NGC 877. Unfortunately, all but 4 or 5 very uninteresting red spots of a galaxy are listed in NED with the interesting looking ones not even listed.

While I again fought the weather for this image I was able to scrape up some reasonable frames though only one usable green frame could be found. Fortunately, that\'s the least important color and appears to have done no harm. 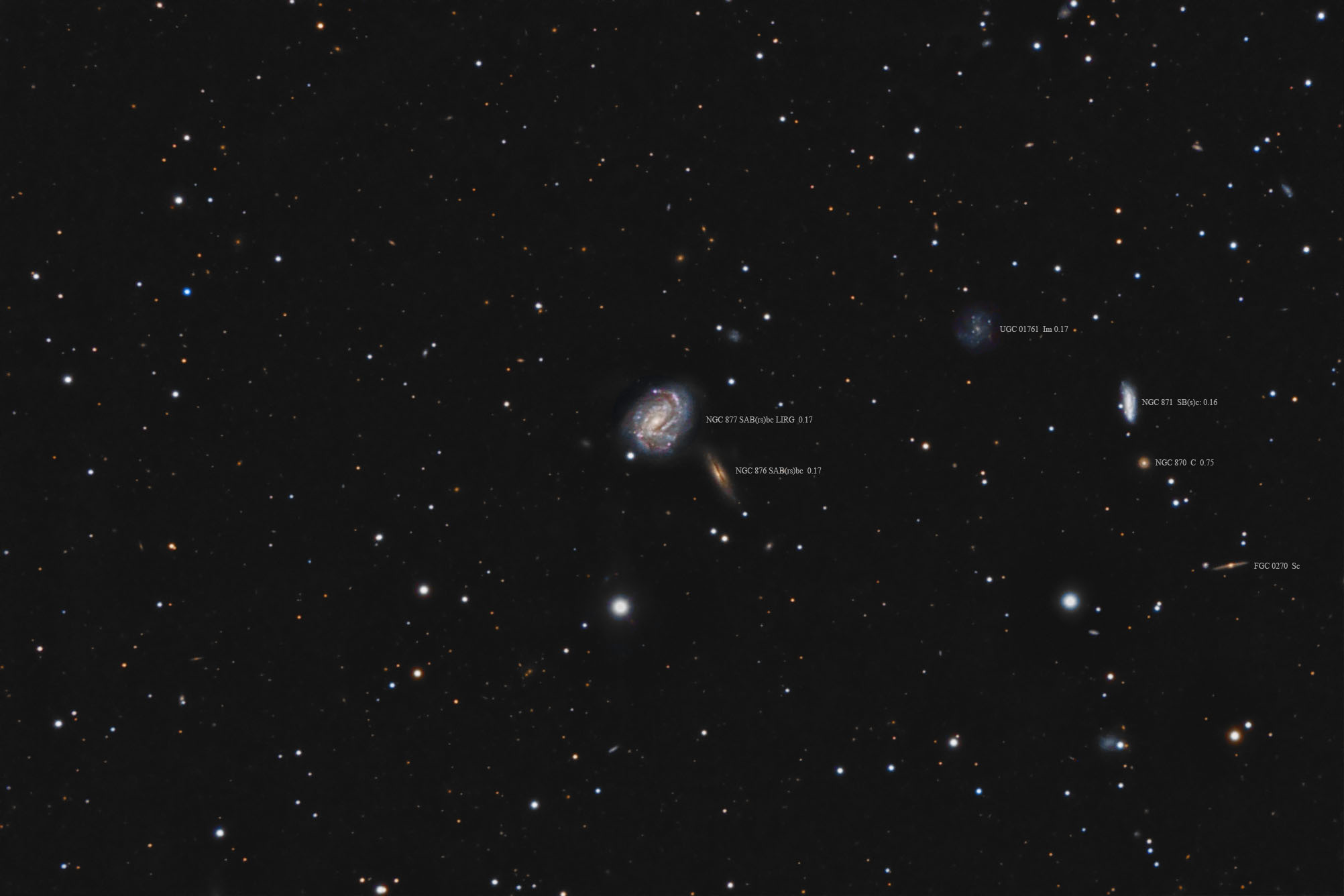 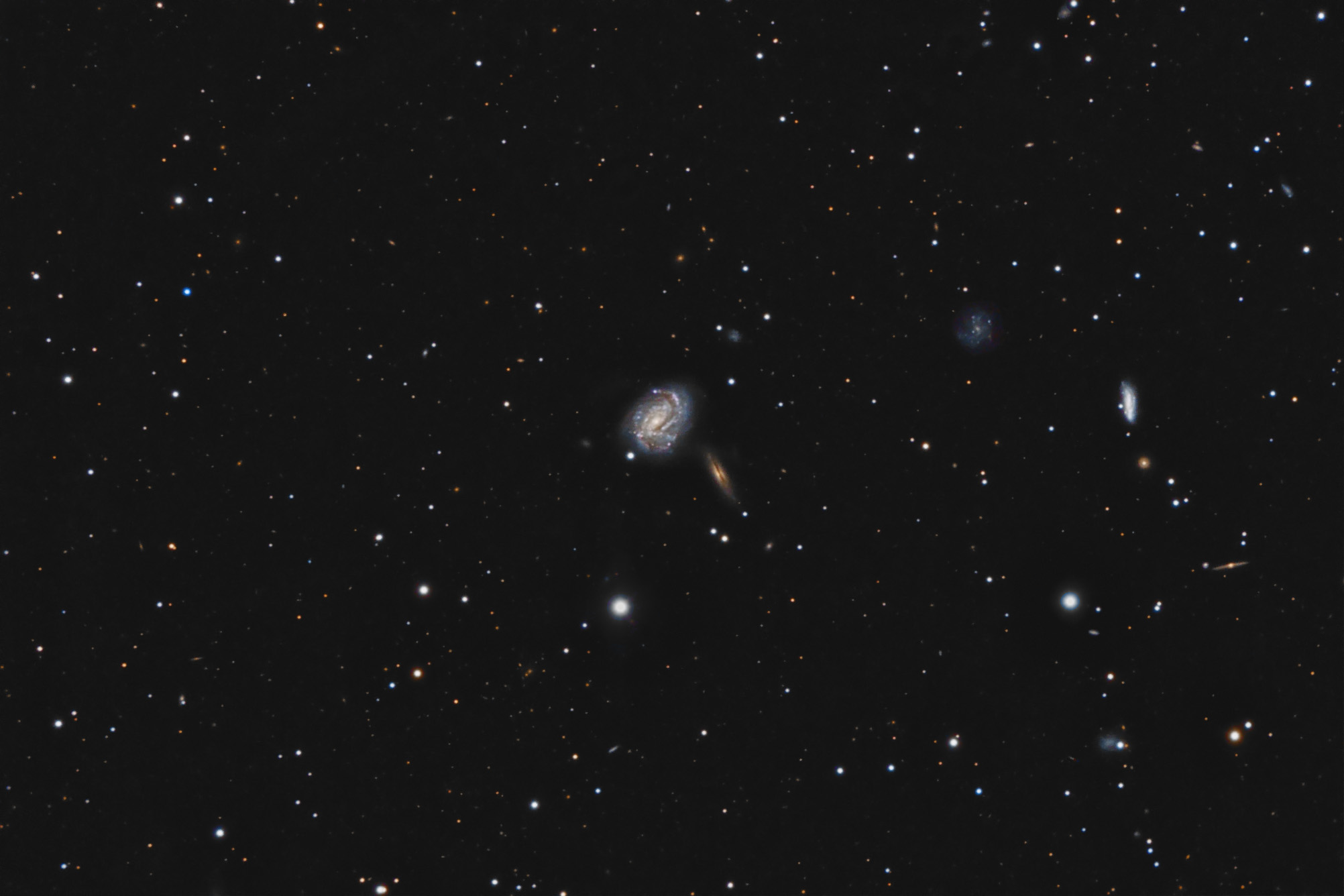