A note at NED reads: \"This is a peculiar dusty ringed galaxy... It is classified as a barred galaxy ..., but our Fourier analysis shows that the phase of the m= 2 amplitude is not maintained constant in the assumed bar region, indicating a spiral-like nature of this structure, seen also in the polar angle map.\" It appears they have a problem with the bar as well.

The galaxy appears like it has recently interacted with some other galaxy but as other notes say there\'s no obvious candidate. But nothing is said about it possibly being the result of a merger. That, to me, could explain a lot about the issue of a bar or not a bar, the rings and outer smooth arms. The smooth arms being tidal plumes being pulled back into the spiral rather than true arms. The starburst nature of the core is also explained. High-resolution images of the core show it made up of several red, near starlike, regions. Odd for an interaction but not for it being in the process of digesting another galaxy. The attached pseudo color Hubble Space Telescope image doesn\'t help to confirm the idea of a bar and explains the red regions as red dust. That also accounts for the reddish glow in my image to the northwest side of the core. The HST image was taken in blue, red and near infrared with the red mapped to green and IR to red then the whole thing likely color shifted to approximate what red green and blue filters would see.

This galaxy was discovered by William Herschel on September 10, 1785. It is in the original Herschel 400 observing list. My notes with my 10\" f/5 on September 11, 1985 at 60x reads: \"Small, nearly round puff of a galaxy. Hint of an irregular outer shell. No nucleus seen.\" I indicate this was a good night. I was observing from this lake so it was low in the sky and I was working over the mist rising from the lake though it must be light since I didn\'t mention it.

Being in an area that surveys seem to avoid no other galaxy in the image has any redshift data. With nothing but a couple hundred galaxies known only by their coordinates with no data, most without even a magnitude and the result of automated plate surveys I didn\'t prepare an annotated version. Like many objects taken in late November weather and seeing was poor. I needed many nights into early December to get enough frames to process this one. 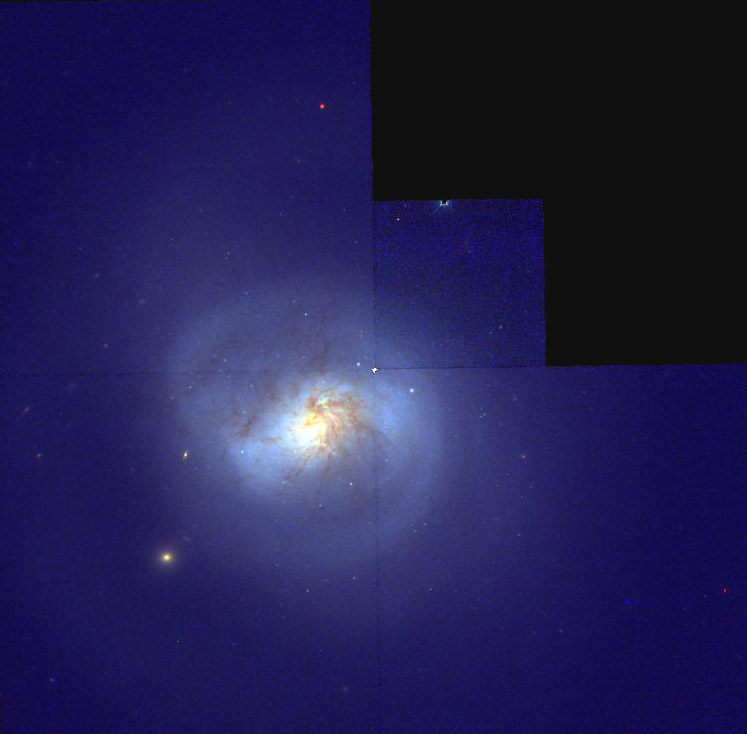