NGC 1087, 1090 and 1094 are three nice spirals in Cetus just below the celestial equator. NGC 1087 is a SAB(rs)c spiral with a lot of Wolfe Rayet stars and HII emission though I didn\'t pick up the HII. The bar is very short. The NGC Project apparently doesn\'t see it saying it is an Sc spiral. In any case, the spiral structure is very broken and indistinct. Many star-forming regions are seen across its face. The disk is considered to have a very low surface brightness. While it seems rather bright this is mostly due to the star clusters rather than the disk itself. Both redshift and Tully Fisher measurements put it about 60 million light-years distant.

NGC 1090 is a more normal barred galaxy classed as SB(rs)bc by NED and SBb by the NGC project. It is about twice as distant as NGC 1087 at 120 million light-years. The third spiral, NGC 1094 again doubles the distance and adds a bit more as it is about 280 million light-years distant. The NGC project says it is an SAB(s)ab spiral while the NGC Project again says no bar saying Sa/Sb. Here I have to agree as I can\'t find it either though the way the arms join the core is more like that of a barred spiral so I assume it is there, just lost in dust. Just north of it is CGCG 389-017 an Sbc spiral at about the same distance but of a much smaller size.

Just off the bottom right of my image below the asteroid (73465) Buonanno is the galaxy cluster Abell 0381. However, none of its galaxies are obvious in my image. It is listed as having a diameter of 16 minutes putting about 40 percent of it in my image. Its distance is listed at 2.2 billion light-years. There are no galaxies in the image with the redshift appropriate for that distance. Instead, the field is peppered with galaxies at about 570 million light-years. However, I turned up no galaxy group at that distance in the field though several groups with little information on size were located both above and below the field at the appropriate distance.

The image contains a surprising number of quasars and quasar candidates with many more just outside the boundaries of the image. Many are in the 10 billion light-years range for light travel time.

The naming citation for the asteroid reads:
(73465) Buonanno = 2002 NP55
Roberto Buonanno (b. 1947) is an expert in stellar evolution and director of the Osservatorio Astron{o}mico di Roma. He created the Planetary Sciences team at the OAR and supported research programs devoted to near-earth objects and to the study of the physical properties of the small bodies of the solar system.

Again, conditions took a toll on this image. It is more than a magnitude short of my typical limit thanks to poor transparency. But at least it was better than many nights in 2012 and 2013. Conditions also meant I threw out a lot of frames. I took 8 luminance and 4 of each color. I kept 5 of 8 luminance just to have enough data to make a decent image though it did reduce my resolution somewhat to do so. 3 of 4 red images, again weak were used, 2 green were usable but only one blue frame was usable, unfortunately. Still, I think that one blue frame has better signal than either of the other two colors. The results seem about correct to me even if there is that difference in the number of frames used. 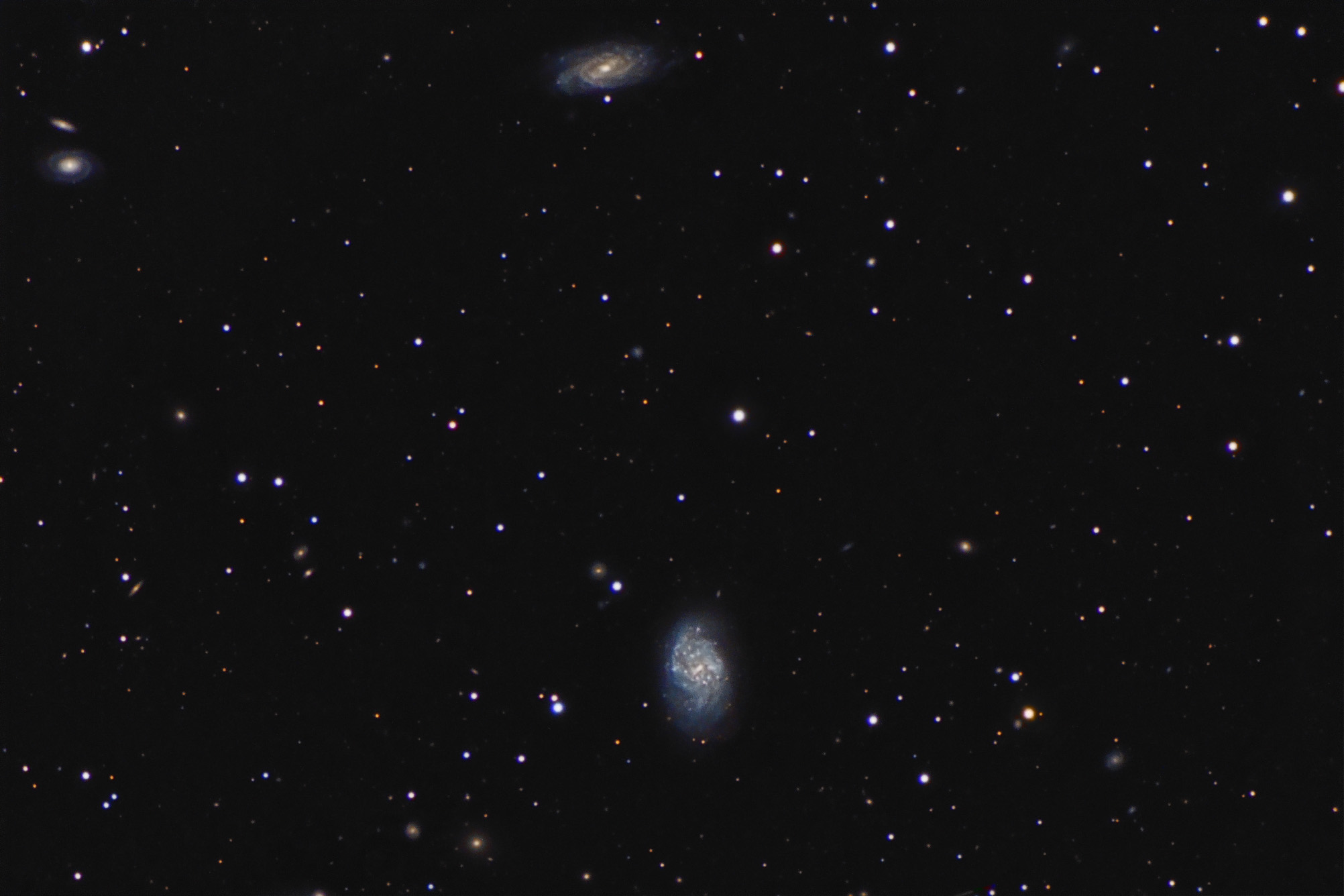 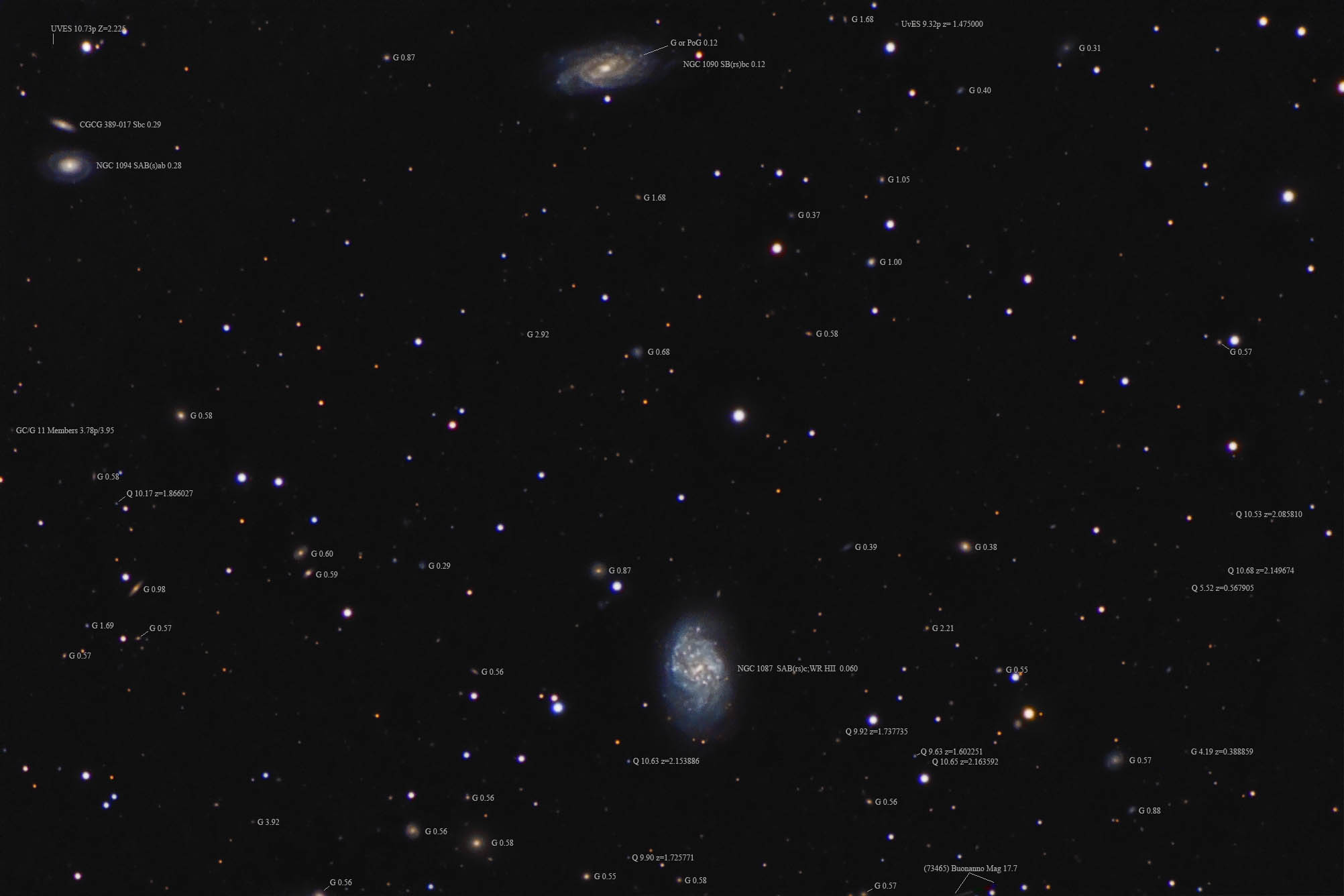