NGC 1193 is an open cluster not far (as seen in the sky, that is) from NGC 1245. Like 1245 it is in the winter Milky Way in Perseus. The Milky Way is our galaxy seen edge-on from inside the disk of the galaxy about 25,000 light years from the center (about halfway out to the edge). In the summer we are looking toward the center of the galaxy. Stars are packed more and more densely as you approach the core of our galaxy. Thus the summer Milky Way is bright as there are lots of stars to look through. So many we can\'t even see to the core of our galaxy in visible light. Dust in the galaxy blocks the view. We have to use infrared light to see to our galaxy\'s core. But in winter we are looking the opposite way, to the outside of our galaxy. Here stars get less and less densely packed so far fewer stars make up the winter Milky Way. It is faint and often overlooked as it is so faint. Still, this is where you find open clusters like NGC 1193. Because the stars and dust are so thin looking out of the galaxy we can see farther and thus see more distant clusters. As clusters get more distant they appear smaller to us. NGC 1193 is a good example. Though I couldn\'t find any reliable distance estimate to this cluster most sources list it as one of the older open clusters in our galaxy with an age about the same or a little older than our sun which is 4.6 billion years old. Most open clusters are torn apart by tidal forces in our galaxy and never get very old. In fact, most, if not all, the stars in this image were formed in clusters of this type that were then torn apart and distributed through our galaxy. Our sun likely did the same. Visually this cluster is very faint and needs at least an 8\" telescope to start to see the individual stars.

The above was written back in 2008. WEBDA didn\'t exist then. It now says the cluster is almost 8 billion years old and 14,000 light-years distant. It is barely reddened by only 0.12 magnitudes showing how little dust there is in this part of the winter Milky Way. For a cluster 8 billion years old I\'m surprised how blue most of its stars are. I\'d expect there to be only a few of that color left as only very late F class stars or cooler would still be on the main sequence at that age. The cluster was discovered by William Herschel on October 24, 1786. It is in the second H400 observing program. 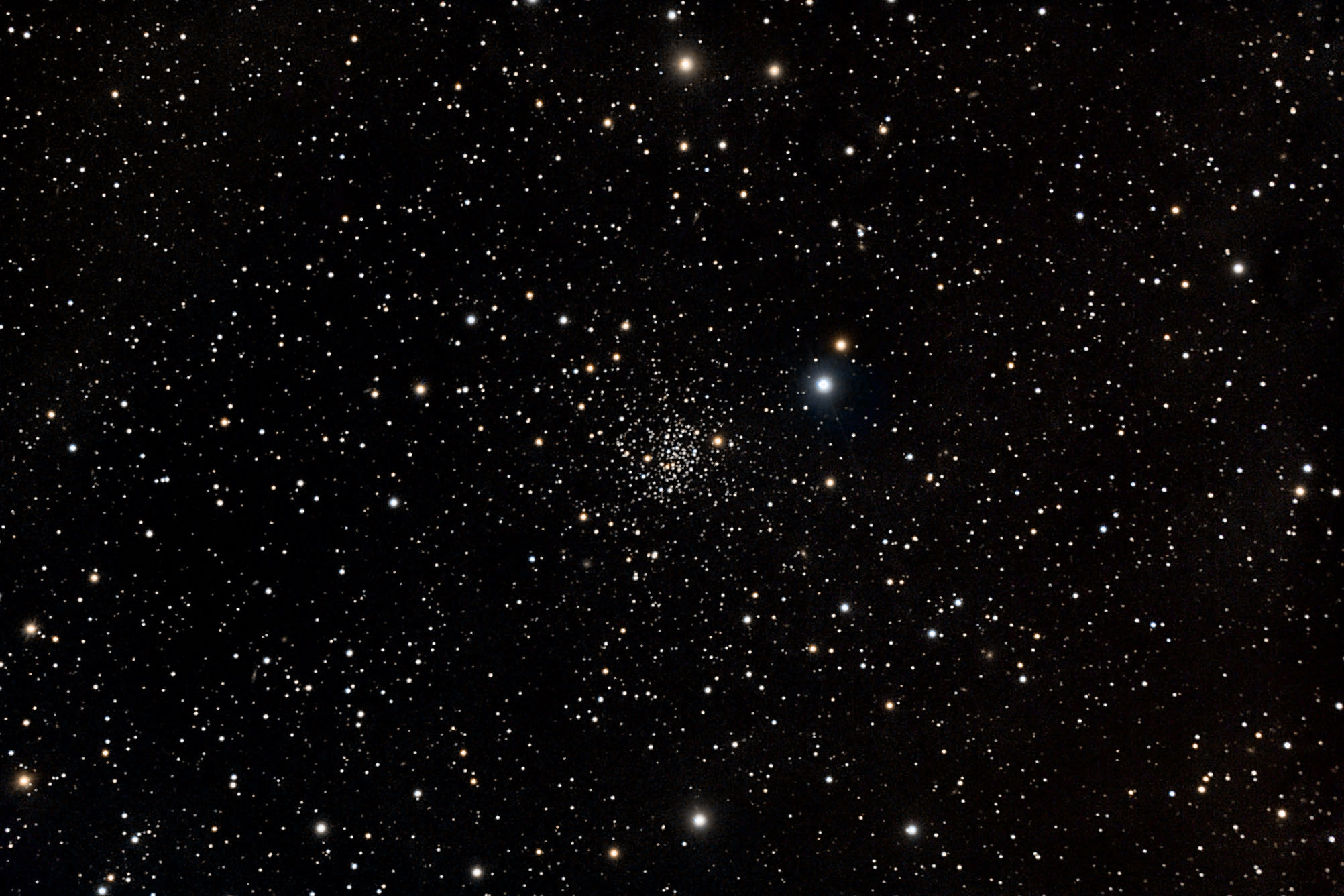