NGC 1788 is an Orion Nebula, not THE Orion Nebula but it certainly is a nebula in Orion. We normally think of emission nebula when mention is made of Orion but it has many reflection nebulae as well, including M78 and McNeil\'s Nebula. This one is less well known, however. It has a dark nebula running through it, LDN 1616. It is likely part of NGC 1788 rather than something separate well in front of it. The nebula appears to be part of the same huge molecular cloud that is responsible for THE Orion Nebula, M42-43. At least its distance is about the same at 1300 light years. Normally only the bright central part is thought of as being the nebula but as you can see it really is far larger, far larger than my field of view.

There are two asteroids in the image, in the upper left corner is (54443) 2000 MT5 at magnitude 18.3. It is moving mostly up in the image. There is a break in the trail as I had clouds dim the mid portion of the luminosity exposures. The other asteroid is hard to find. It is above the nebula, left and up from the very bright star above and a bit right of the nebula. It appears nearly star-like as it moved only 3.5\" of arc during the luminosity exposures. You will see hints of the RGB exposures to its left. Those are the best way to tell it from a star. It was moving down and to the right during the exposure. I took the color frames first so they trail the main asteroid image. It is (129774) 1999 JM5 and is also magnitude 18.3 but appears far brighter because nearly all of its light fell on the same part of the sensor so the image built up rather than being spread out as for most asteroids. No, it didn\'t stop orbiting the sun and thus is about to fall in on us. This lack of motion is an illusion as we are moving the same direction as it is at about the same speed. We are also moving away from it at high speed but that motion can\'t be detected on a two dimension image.

I\'ve seen this nebula called the \"Fox Face Nebula\". I\'m afraid I don\'t see the resemblance. Maybe the face of some beast who just ate something that tasted awful and thus now has a very contorted grimace on its face. Or maybe its a gargoyle. It was discovered by William Herschel on February 1, 1786. It is in the original H400 program. My entry on March 16, 1985 with my 10\" f/5 at 195x on a good night reads. \"Looks like the drawing except for the stars in it. The dimmer one in the drawing isn\'t there. Instead, there is a 13th+ magnitude star at the far east end where he drew a condensation. Has that faded that he drew -- variable star? Or was the seeing so bad the star appeared double at the time he drew the nebula?\" While I see a double star in the center of the nebula the brighter is 14.6 so likely not visible when the drawing was made. Actually, there is a star in the condensation that is about 12th magnitude in my FITs file. I\'m not sure what I was seeing when I wrote this.

The blue \"spear\" of light coming in from the top left of center is just a blue star that hit the edge of my imaging sensor. These are very hard to avoid with so many stars in our galaxy. It seems one will fall on the edge of the sensor much of the time creating such a light spear. They aren\'t seen until I\'m processing the image so I don\'t know they are there when composing the image. I find them only days or even months later when I finally get time to process the image.\" 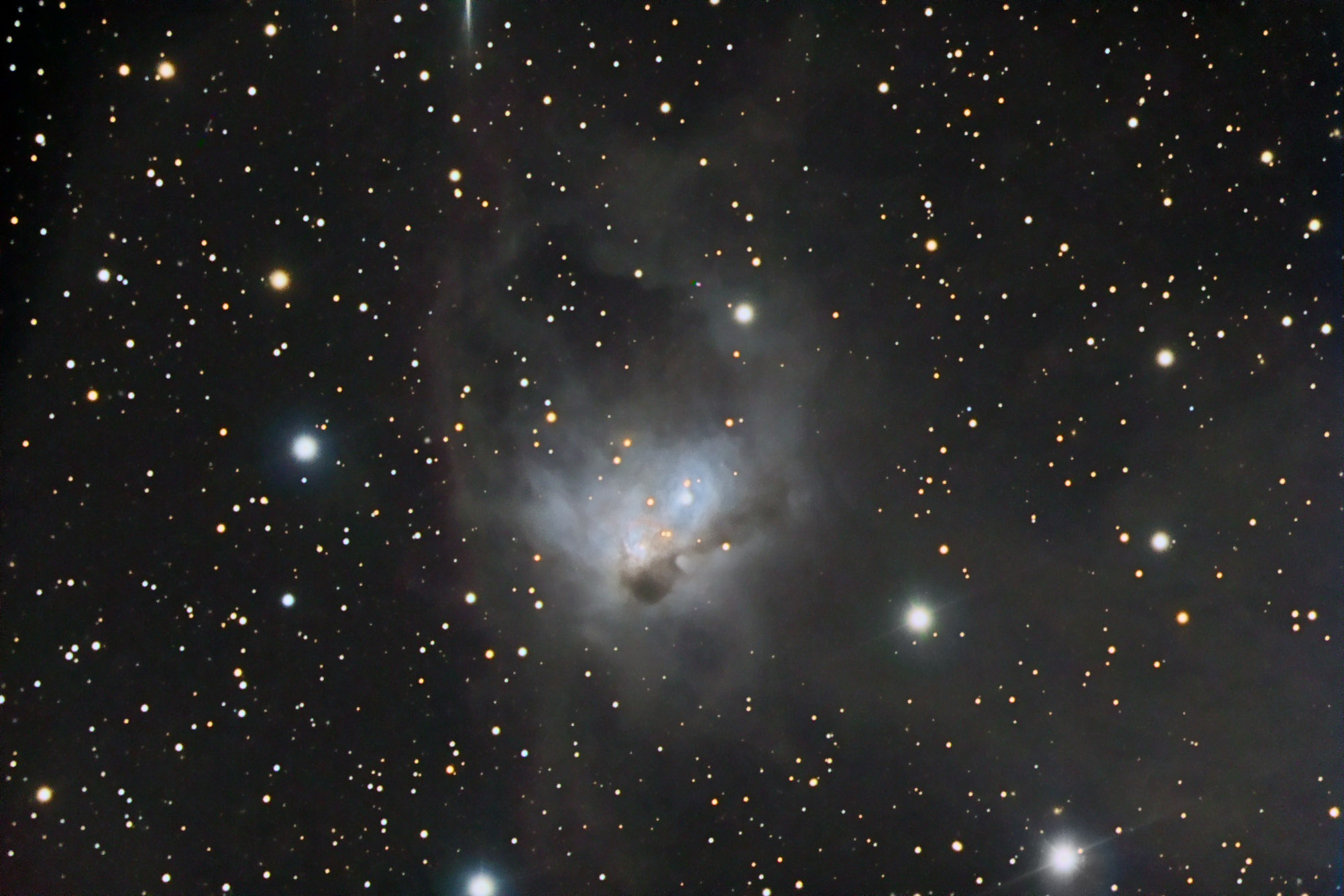